Zero Escape: Zero Time Dilemma is the third game in a trilogy. That’s important to understanding my review, so I’m going to have to take some time to describe the first two games, which I’ve also played, then circle back around.

In 2013, I played the game 999: 9 Hours, 9 Persons, 9 Doors, a combination puzzle adventure and visual novel game for the Nintendo DS. The game is a rollicking mystery full of death and betrayal, where the story branches are sometimes interrupted with clever escape-the-room puzzles, then bridged with visual novel sections involving branching choices and deep character interactions. However, the original 999 did have some serious flaws. It’s required to play the game through several times to get the game’s real ending. This meant, in many cases, solving the same room escape puzzles over again in second playthroughs, just to make one different choice in the novel portion for access to a different part of the story. Playing the game several times in a row and seeing the same bad endings multiple times, I knew that I was missing some actual finale, but was confused on how to see it. I finally ended up resorting to a walkthrough for this. The conclusion to the game was weird and satisfying, but I wish I had stumbled on it on my own.

It so happened that 999 had lukewarm sales in its home Japan, but did pretty well in the United States and picked up a dedicated fandom. It did well enough that a sequel was made, Virtue’s Last Reward. Virtue’s Last Reward added some additional quality of life aspects to the format, including a flowchart that allowed players to easily see which paths to traverse to see better endings, and the ability to jump around in the story so that puzzle rooms did not have to be replayed. It was a practically perfect take on the formula to me, even though the story was bizarre even compared even to the previous title. I’d rate Virtue’s Last Reward as an excellent game, with an extremely cool story and structure.

Virtue’s Last Reward, however, ends on a cliffhanger. That brings us to this year, where the game Zero Escape: Zero Time Dilemma, the third game in the trilogy, was released for 3DS, Vita, and PC. 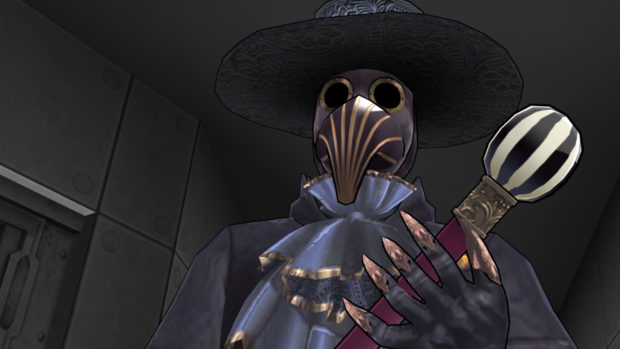 Marketing materials try to convince you that Zero Time Dilemma, being the first Steam release in the series, is a perfectly fine introduction to the series if you missed the first two games. I would disagree. For one thing, Zero Time Dilemma spoils many of the later-game reveals in the other two games, and it does this very early on. If you play it first, you’re cheating yourself out of the best bits of Virtue’s Last Reward. Secondly, the dialog dropped about the metaphysics of the universe play on things established in not in just one, but both previous games, with several characters in the third game being returning characters from each of those other two titles. Characters in Zero Time Dilemma are going to out-of-the-blue drop in a conversation about “the morphogenetic field,” and the only logical response I can imagine from someone who hasn’t played both previous games is: “whaaaa?”

If you did play the previous two games, there’s no chance you’re going to want to miss out on the third one, though. Especially considering how much I enjoyed Virtue’s Last Reward, I knew I had to get Zero Time Dilemma as soon as possible. I specifically wanted a portable version of ZTD, but none of the local Gamestops had it in stock, so I ended up downloading it from the 3DS eshop. It was an okay way to play, but can’t say I recommend this approach if you can get the game some other way. It’s a huge beast of a game with lots of sound and video, and I also got possibly the ugliest version of the game, with textures downgraded to fit into the 3DS’s hardware. I’ve seen forum posts to the effect that the best experience is on the Vita. The game also has a Steam page, where you can also watch the trailer, if you want to see how it looks on PC. 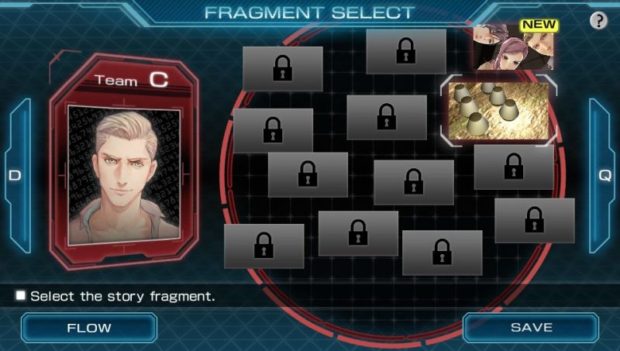 Zero Time Dilemma has a story gimmick not present in the previous two titles. First, the game has a flow chart similar to that in Virtue’s Last Reward. This allows the player to see the way the story is branching, and at a glance notice which branches are remaining to explore and jump right to them. But the additional gimmick that all the story fragments can be completed in an essentially random order, on a different shaped “fragments” chart. This structure has a narrative rationale. Characters in the game are given a “forgetting drug” every 90 minutes, put to sleep, and then woken up in a puzzle room. They don’t know how many puzzle rooms that they may have completed before then. Sometimes they will wake up, and a character is missing. Where did he or she go? The other characters may not remember if that character died in a previous segment, or how. At the end of every segment, if there are any casualties, a calm computer voice announces them, Hunger Games style. This leads to a lot of sequences where characters act surprised about what just happened and try to piece things together, scenes that can sometimes get a little redundant.  It’s video game amnesia taken to an extreme.

In the two previous Zero Escape games, there’s one big mystery, which is “the person who arranged this entire deathtrap situation is among us, playing through it,” and figuring out the identity of the conspirator is part of the fun. I was able to guess this pretty early on in both of the original games, but I didn’t guess it in this one. I actually don’t think it was fair this time! But this may be because the game finally foiled me. I won’t give you any hints, just in case you play it and want to try to figure it out. 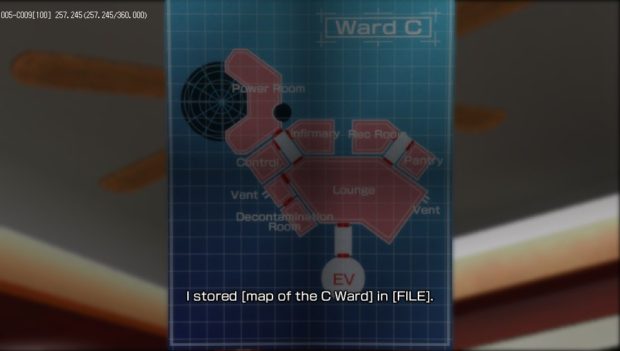 Other mysteries revolve around individual Room Escape puzzles. Some people say these are forgettable enough that you could have the story part of the game, and skip the escapes, but I honestly think they’re married to the story well. The puzzle rooms are sometimes fun and clever, but they aren’t always perfectly so, especially in this title. I have a clear preference: I vastly prefer trying to logic my way through an alien number system, however strange, over “puzzles” where the trick is you have to hunt for the exact right three pixels to click on before a dumb character will finally do a thing. And there’s a couple puzzles of those second type in this game. The game has an in-game note-taking system, but I found it to be terrible and useless. The game is much more playable with an old fashioned pen and paper at your side.

The previous games are straight visual-novel style in the story segments, though Virtue’s Last Reward did have some animated and voiced cutscenes. Zero Time Dilemma is, for the most part, animated and voice acted during all of the story pieces. I don’t have strong feelings about the new approach. The animation style mainly serves to add mystery to certain scenes by hiding information with the choice of camera angle. It’s otherwise not terrific animation in many places, clearly done under a limited budget. The voice acting is not all perfectly directed, either, but it’s all passably convincing with only a few stand-out bad screams of terror in the mix, and some parts that are rather good. It’d be hard to say some of this stuff with a straight face no matter what, and the story is the clear highlight, not the graphics or sound. Note that I played with English voices, so I can’t speak to the Japanese voices, but the option is included to switch to them if you’re more of a subtitle person.

This series is largely the vision of its director, Kotaro Uchikoshi. He has directed other visual novels, but this series is his most famous. From what I have read about his other titles, they share some similar themes. There’s a fascination in these stories with a lot of the things I personally find fascinating about video game stories: the nature of choices, of branching, of good and evil, the question as to whether or not a player in a branching story has real agency. These things have all been explored in other games of course, but the way they’re approached in this series is unique because of the way the visual novel’s branching story format blends real choice with forced choice.

The Zero Escape series also has a fascination with weird science: quantum computation theory, game theory, paradoxes, and parasite biology all come up as topics of conversation in this game. Sometimes the horror and action will simply take a break while a character lectures about some interesting probability problem they’ve encountered. Zero Time Dilemma has several of those dialogues, including my favorite: a long conversation about the paradoxes inherent in the film Back to the Future where the characters also never mention Back to the Future by name to avoid any infringement. So really, it is a long conversation among characters about the paradoxes in “Science Fiction Film Starring High School Protagonist We’ll Call M.” It’s the kind of conversation you’d totally have with friends, if you were geeks and drinking, but it’s not the way you’d have that conversation. 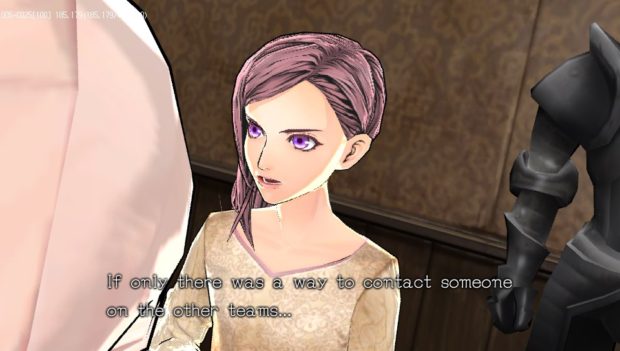 Characters in the game are interesting and, for the most part, well-rounded, though sometimes they’re inconsistent with their portrayal in previous titles. (Akane’s behavior is often a source of great confusion to me and she feels like the character that only sticks around because the writer likes her so darn much.) Sometimes characters do the perfectly sensible thing you’d do in this situation, such as “hell with this, let’s get drunk now,” or, “hell with this, let’s have sex now,” but not in the way that you’d try to do it, sensibly (no, don’t have the sex there). This is honestly the best sort of horror-movie schlock, and I love it. Sorry for the minor spoilers, but honestly, these moments are good, and I tell you about them only because I want you to experience them.

I want you to experience them! But! Virtue’s Last Reward, from a gonzo plot-twist-filled story, production value, and room puzzle perspective, is my favorite of the three games. So what I really want you to do is the following: watch a walkthrough or Let’s Play of 999, then play Virtue’s Last Reward, which is on both 3DS and Vita. After that, you’ll basically have to play Zero Time Dilemma because you’re gonna want to know how the story ends, even though Zero Time Dilemma was made on a tight budget and really isn’t quite as good as the previous game.

Or, maybe you could… use the morphogenetic field to interact with an alternate timeline where you already played 999, and… oh, sorry, really, I’ve said too much. I guess another way to put it is that my opinions about this game are… complex.