…a streamlined version of clunky, older game mechanics — without feeling “dumbed down” or “casual.” Bastard Bonds is simply more elegant than its predecessors and influences.

I’ve had an imagined, dream game in my mind for some time now. A game where I can build a party of characters and explore a large, open world that’s both challenging but also manageable. Something with the old-school charm and simplicity of games like the Might & Magic series, with a more modern interface and design philosophy. The resurgence of niche, retro-style RPGs in the last few years has had plenty of opportunity for releases that scratch the surface of this desire, but none that really capture it in any real or full capacity. That is until, on a fluke, I decided to check out a strange little game that popped up on my Steam store page called Bastard Bonds.

Bastard Bonds is a throwback to a number of classic strategy and role playing games from the 1990s. It feels like if Final Fantasy Tactics were made by a Western developer marketing to an adult audience. A very adult audience, to be honest, but more on that later. Throughout the game, you recruit dozens of characters who will accompany you on missions across over 200 combat maps. The maps vary in size from small, single-screen areas to massive, multi-leveled dungeons. As you explore the world, you’ll fight nearly 200 different types of enemies, most of which can be recruited into your roster of playable characters.

Along with the many collectible characters and monsters, you can populate the world with your own creations. Using the game’s excellent character creator, you can build your own custom characters who will then show up in the game world for you to employ. Don’t like the visual options in the character creator? You can easily use your own pixel-art character sprites and mod them into the game to replace the in-game character art.

Gameplay itself is a fairly simple system honed to near perfection. Combat is turn-based, and plays out on a grid similar to games like Final Fantasy Tactics, the original Fallout games, or more modern titles such as Shadowrun Returns or Wasteland 2. You take a party of four into the field, choose a map, and explore the area, engaging in fights with NPC groups. These fights ultimately boil down to a series of risk/reward decisions. Each combatant has the option to either take a risk-free action — guaranteed to execute without any danger but end the character’s turn — or a more reckless action that can allow them to take another turn during the current combat round. If you take the risky option, you will raise the character’s risk meter. The higher the risk meter, the greater the chance that the character will fumble an action, and both expose themselves to more damage from attacks and end their turns for the rest of the round. Characters can continue to take risky actions, pushing the risk meter further each time, choosing whether to keep going or to hedge their bets and end their turn with a safe action. If you fill your risk meter without fumbling, however, your character will gain a defensive bonus and provide an additional bonus to fellow party members. Both player characters and NPC enemies use this system, and most combat rounds will see many turns taken by each combatant every combat round. 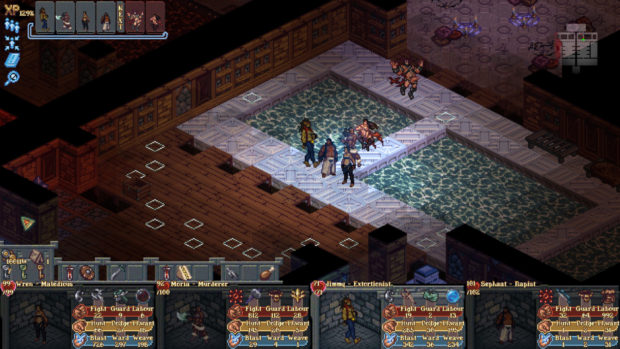 There is more to it than that, obviously. With options for how you fight (melee, ranged, magic), various elemental effects to apply to attacks, defensive stances, and different healing methods, it fills your traditional RPG combat tropes. The risk/reward combat mechanic is the core of the system though, and will be the greatest factor in whether you survive an encounter or not. Enemy combatants will attack the closest target, making character positioning key, with tank-like defensive characters being used to absorb melee attacks, more magically inclined characters taking on other spell casters, and various damage-based characters doing what they can to thin out the enemy units.

Another significant element of the game is a fun stronghold system that determines how many people you can support in your army, as well as allowing you to hire a variety of non-combat units such as blacksmiths to improve your gear, merchants to sell you supplies, a quartermaster to manage your inventory and sell your excess goods, and so on. Just like the combat system, the stronghold mechanics are fairly simple, with a character skill-based system determining how large a stronghold you can maintain. The vast majority of the combat maps can be converted to strongholds provided you have the “manpower” to sustain them, which pushes you to constantly seek out the next level of stronghold to sustain a larger army.

Character skills are based on a clever 3×3 grid system where putting points in one skill also improves other skills adjacent on the grid. There is no class system, instead using a point-buy mechanic which allows for some pretty unique character types. You can build tanky spell casters, crit-heavy glass cannons, or entirely utilitarian characters to maintain your strongholds and overcome challenges such as magical traps and locked doors. Whether you build characters who are highly focused or more of the jack-of-all-trade types, they all seem to be useful throughout the game. 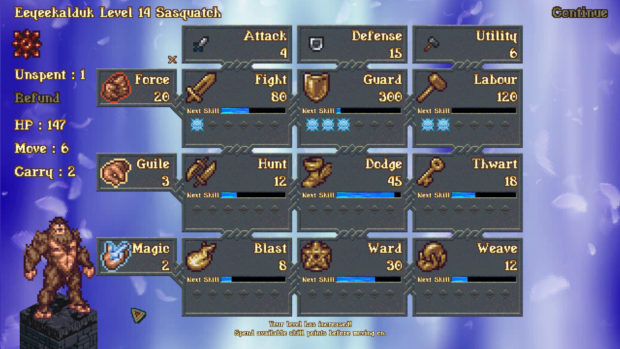 There are other minor elements that are key to successful combat encounters, such as character alignment, magical element types, and so on, but they are some of the more nuanced aspects of the game that don’t need to be explained in detail here. Suffice to say there is plenty to consider as you build your army. Fortunately the game never feels overwhelming like so many other old-school RPGs and strategy/tactics style games. All the systems have a simplicity to them that I really appreciate, and feel like a streamlined version of so many clunky, older game mechanics. No, this doesn’t mean it’s “dumbed down” or “casual” or anything like that. This game is still going to appeal primarily to a “hard core” gamer audience. It just does it in a more elegant manner than its predecessors and influences.

This isn’t to say the game is without flaws. The enemy AI is pretty basic, attacking the closest target every time, and character pathfinding leaves much to be desired. The user interface is far from perfect; certain aspects like character skills or inventory are hard to access at various points such as the world map. Most of the status effects applied to your characters or the enemies are an absolute mystery, without any apparent way to see what they are or what they’re doing while in combat. Many other combat systems are similarly opaque and hard to grok, if not impossible.

All that said, the flaws are out-shined by the game’s strengths, and I feel they are somewhat excusable seeing as this is the first RPG release of a single developer. Bastard Bonds is a massive game, with all the art and code coming from one person, and it plays out better than plenty of other RPG and tactics games developed by much larger teams and AAA studios. Oh, and the music is solid as well.

One other major aspect of the game that I feel needs to be discussed is what was mentioned earlier about it being targeted to a very adult audience.

To put it bluntly, I’ve seen more dick in this game than every other un-modded game I’ve ever played, combined.

There are also some very strong homo-erotic elements to the game, and if you’re the kind of person who isn’t going to gel with that, well, maybe this isn’t for you. I for one am all for it though. The setting is very evocative of the type of fantasy worlds created by Frank Frazetta, with scantily-clad and curvaceous warrior women, barrel-chested men wearing nothing more than loincloths (if that), plenty of sexy orcs, and some very well-endowed werewolves, demons, vampires, goblins, and all sorts of other monsters to fight or befriend. That said, the game doesn’t feel very sexual, beyond the art; the writing is much tamer, sex scenes are pretty modest, and romantic encounters play out with a sort of innocent charm of adolescents on their first date. Convincing a guy that he should hook up with his gay friend because, hey, why the hell not, they get along well enough, was just adorable.

Full disclosure, I haven’t finished Bastard Bonds yet. Which isn’t to say I haven’t played it a great deal. I’ve easily sunk 40-60 hours into this title since I picked it up, but I also restarted it a few times because… well, that’s just something I do with RPGs. Reading other people’s comments online however suggests the game will take at least 40 hours to complete, has plenty of secrets to discover, and a great re-playability factor despite the fixed level layouts and monster encounters. 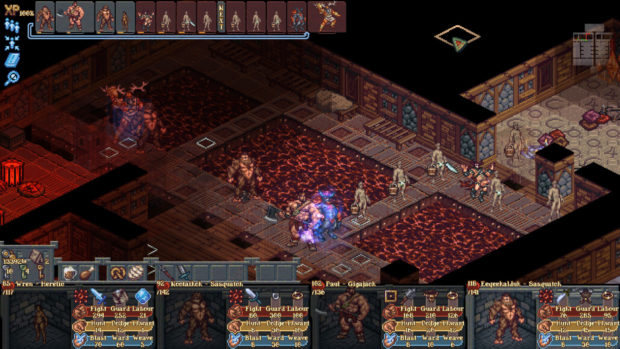 I can’t recommend this to everyone. If you’re looking for something with a deep story, this might not be it. While the writing is solid throughout, it is fairly sparse, similar to the CRPGs of the 90s in a sense, delivering story in short bursts while focusing largely on gameplay mechanics and combat. If you want overly-complicated combat and character leveling systems, this might not be right for you. If however your interest is in something more streamlined and focused in its execution, and everything I described thus far sounds appealing to you, you should really check this out.

At $20 it might seem a bit steep to take the dive into a relatively unknown developer’s first foray into the RPG/tactics genre. Never fear though, you can download the demo from the developer’s site and get a taste for free there. The demo is pretty large, easily taking 3-5 hours to fully explore. It does seem to be based on a slightly older build of the game though (or at least it was when I played it), so know that many minor aspects of the game and interface are improved in the final version.

You can find the demo for Bastard Bonds here, or you can purchase the full game either from the same site or through Steam.