Picking out Steerpike’s sentiments of freedom within a videogame, it took me back to when I first started playing online video games. Ultima Online was my first, and a game which at the time gave the impression of unparalleled freedom…

There are several moments playing Ultima Online that I’ll never forget, and which made me realise the possibilities of online games.  The first was walking into my nearest city to see the hustle and bustle of people busily trading and chatting, then to witness one particular individual walk past me with an enormous, tamed white dragon.  Appearing like a crazed fan, this poor man had to suffer my questions about it for the next twenty minutes (though, if you’re going to walk around with a  tamed diamond white dragon the size of a house, you should expect some interest.) The second event which I remember in Ultima Online was, when out 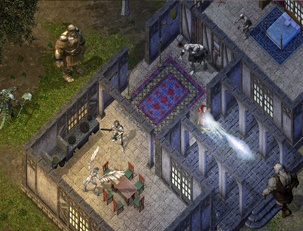 adventuring, I came across a house in the middle of the forest.  Deciding I would nose about, I let myself in and attempted to rummage through the chests and draws to find something of value.  It was only halfway through my fledgling thievery that the owner returned.  After he mockingly locked me inside the house before I could make a swift getaway, I ran around wildly trying to find an exit, only for the owner to catch me.  Without an opportunity to even justify my actions, he had incinerated me with some sort of spell.  It served me right for being so nosy.

There were also the groups of player killers who would congregate outside cities, corpse camping poor unsuspecting travelers without fear of NPC or Grand Master reprisal.  The ability as a Thief to wear disguises after successful skulduggery, the abundance of trade skills and the enjoyment of just exploring.  MMOGs (don’t you just hate that acronym?) since the days of Ultima Online have evolved very little, and, I would argue, have narrowed the impression of freedom greatly.

The only MMOG which attempts to offer the impression of true freedom is EVE Online.  Despite its significant flaws (which there are many), the game’s freedom is heavily documented, and EVE by many critics is regarded as the definitive example of what the genre should offer.  Tales of treachery, theft into the billions of Isk (EVE’s galactic currency) and entire Corporations wiped out from internal sabotage are commonplace.  Yet here is a game which is fundamentally a series of empty spaces, linked by corridors.  There is no exploration which offers personal reward or satisfaction.  Abandoned space stations that litter the galaxy cannot be examined, boarded or captured while craters within asteroid surfaces that are large enough for space craft are difficult to explore due to the tedious control method.

Yet even EVE, with all its potential, is at its heart a glorified chat room under the topic ‘politics.’  As a budding explorer you cannot map the stars and solar systems, before selling them to other players, as the game has already done it to you.  You cannot acquire an abandoned space station that you’ve found in the depths of space, commandeer it, fortify it or use it as a bolt hole.   If you find wreckage from an unknown craft millions of miles from the nearest space station you cannot tow it back to a research lab to investigate its components, in the hopes of discovering new technologies.  Instead, you are surrounded by beautiful space that CCP Games pretend is worth exploring.

MMOGs aren’t there any longer to cater to adventurers, role-players or explorers.  The carrot on a stick approach so cleverly devised by Blizzard has ensured that the player base doesn’t care about invisible barriers or being cattle herded to the level cap. They just care about the end game and the loot.

Physically, as graphics have progressed it becomes more and more difficult to create worlds that are vast, and of interest.  The days gone by where graphics were attractive but two dimensional,  allowed developers 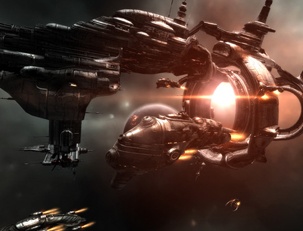 the ability to push the boundary of a game’s content without fear of having to render, map or animate every single object.  They didn’t need limitless numbers of industry professionals or Blade Servers in order to create a single tree or host the game world.  By no means was creating an MMOG over ten years ago easy, but development practices have significantly shifted focus, placing far too much effort on the graphics engine, and not enough time on fundamental game mechanics and content.

Would offline games such as X-COM or Dwarf Fortress – and the depth of possibilities that they offer – be transferable to an MMOG when fully realised in 3D? I suspect not.

I would be happier playing an MMOG with graphics equal to that of Ultima Online: Kingdom Reborn, where possibilities are endless, than continue to be railroaded into the perpetual, neverending grind that WoW and its clones offer.

When MMOGs were a closed shop made up of thousands of players world wide, and not millions, the player base was more than happy to explore what their game world had to offer without the necessity for an abundance of predictable missions.  I never once heard of people complaining about lack of content, or that there was “no end game” because people were occupied with the basics of what role playing was. Players were happy to go about their daily business depending on the person and class they chose to be. They didn’t rush to level cap in an attempt to obtain the best items the game had to offer, to then complain that there was nothing to do. They merrily took part in activities which current communities would overlook in minutes.

While some blame for the decline in online freedom and the genres restrictions can be placed on hardware and a developers’ desire for bigger and better graphics, the primary cause must surely be the basic MMOG template. When a player is given a level target, and all enemies have levels themselves, it undermines the entire game world.

Blizzard have created a breathtaking universe within World of Warcraft, but each region within Azeroth has a level ceiling. For example, the Wetlands has a level range of 20-30 based on the enemies within that area. Once 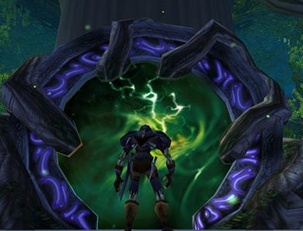 you have reached level 30, there is absolutely no reason for you to ever return. Why should this be? Why go to all the effort to create these stunning locations if you only make them worth experiencing for several hours.

Although the World of Warcraft: Cataclysm expansion pack will revisit some of these past locations and change their appearance, due to the game’s storyline, it still remains a relatively redundant exercise. Considering the level cap will be raised to level 85 upon its release, are Blizzard going to place level 85 enemies or greater in these old world locations, in order to entice the level capped player base? It’s not likely, and so yet again Blizzard have spent countless hours redeveloping existing locations, to completely ignore the fundamental reason as to why people no longer visit them in the first place.

The only way freedom will be achieved in MMOGs is if developers realise that the level mentality, sanitizing players’ actions and the carrot on stick approach, is actually ruining the genre’s potential.  Developers need to remove player, enemy and region levels completely.  They need to remove character classes, and have players learn skills for themselves through physical actions, as opposed to paying gold (who honestly thought this was a good idea?). Players need to see improvements based on unskilled, competent, skilled, proficient, adept and master, not “your Mace skill is 37/100.”

For example, if I wanted my character to become a Ranger using a bow, who could tame animals, there should be the following options available to me:

I should be able to purchase the bow and arrows from existing player shops and gain proficiency in them through practicing against stationary targets or creatures.

I should be able to make or buy an axe in order to chop a tree down (which will eventually grow back) in order to fashion the wood into both bow and arrow.  With enough practice the quality of my crafting should increase.

I should be able to make flights for the arrows from killing feathered creatures and combing the components.

I should be able to visit the nearest town library to learn the basic skills of animal taming through reading books.

I should, if I do not wish to visit the library, be able to acquire the knowledge from already proficient players. They could teach me voluntarily or for a fee, the basics which I would need to know.

I should be able to go to the town hall and purchase a title deed in the name of Ranger.

None of the above would be difficult to implement, and my list of core design changes to MMOG mechanics is lengthy. Sadly however, we have countless development studios with no creativity, wasting time and resources appeasing the current demographic who are incapable of thinking outside the World of Warcraft model.  Until Blizzard directly change their approach to MMOGs (it is only Blizzard capable of changing the market) and break away from the chains they have locked players minds into, then we will continue to have cloned MMOGs that pretend you are free to do as you wish. But if you scratch just beneath the surface, you will find that there aren’t any original role playing elements left.

Email the author of this article at Lewisb@tap-repeatedly.com.