But then I saw something miraculous on that same segment of Twitter: Everyone was mad about Boyfriend Dungeon. Apparently all the edges weren’t filed off, the trigger warnings weren’t strong enough, and people were outraged at the level of evil and villainy that went unremarked upon in this game.

Well, now that people were upset about it, I had to play Boyfriend Dungeon.

And, readers, I enjoyed Boyfriend Dungeon! 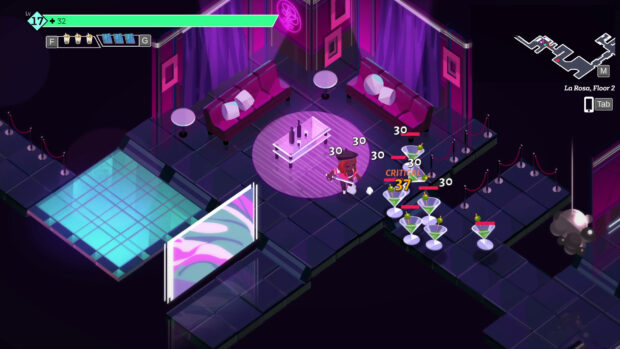 If you missed out on all the conversation, let me start by explaining the premise and mechanics of the game. This game is set in a world where some people – not all people, but some people – turn into melee weapons. You play a college-age human being on summer vacation. Your character can be male or female, or neither – but the text to me, and my admittedly heteronormative biases, read as written for a lady. Once arriving in the swanky big California coast city of living weapons, on your first summer so far from home, you meet and date various living weapon people. Date scenes are played out via a standard visual novel interface. But then after a date, you can go on a dungeon delve with your weapon paramour, turning the game into an action-roguelike that works like a very lite Diablo with a talking weapon. Afterward you go out and get coffee or whatever, triggering another visual novel date, and repeat the cycle until you have maxed out your relationship points with one or more of these person-weapon hybrids.

The dungeon crawling is… okay. It’s serviceable. The premise for the dungeon enemies is kind of Persona-inspired: it is supposed to consist of abstract representations of your own fears attacking you. This felt weak as a hook and was a little undercooked, though it was a perfectly fine excuse to mash attack buttons at things. There’s also only two dungeons in the game, which felt a little abrupt, and overall left me with the feeling that more effort was put into the boyfriend part of the equation than the dungeon part.

Overall, though, I do like the idea of a combat segment serving as a downtime in which you get to know a person. The dungeons are full of spontaneous hangouts that trigger dialog depending on the weapon you’ve chosen, which also gives you opportunities to give gifts to your weapon friend or find out more about them. This combat-romance combo really worked for me in Fire Emblem: Awakening, and this feels like a different take on that premise. Falling in love can feel too abrupt in some visual novels. Not really so in this one.

You never are forced to escalate any story into romance to beat the game. If you wanted, you could simply go on platonic pal dates with the weapons instead of making the game about love. I can understand why the developers would offer the option to never escalate, to please people who are hardcore ace and would rather not feel pressured into romance in what is ostensibly a romance game. But not escalating to romance at least once feels like a rejection of the premise to me. You retain the option to break up at the end if you still aren’t feeling the vibe, which is good.

If this sounds like your kind of thing already, maybe stop reading. Now, I’m about to get into some spoiler territory with regard to a few specific love interests, and the main plot of the game. 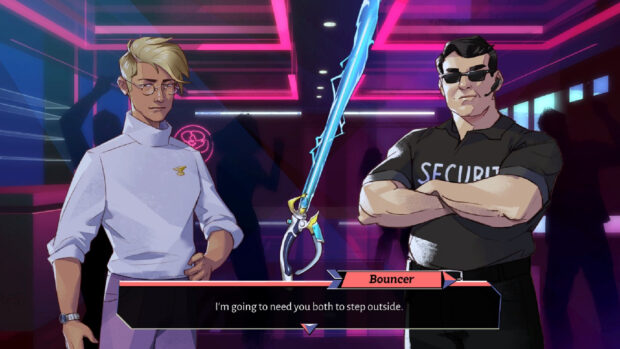 Let’s first talk about Eric, the villain of Boyfriend Dungeon. This is the guy the Discourse was all about. He’s written as a stalker and a creep who is “just being a nice guy.” He’s pretty annoying to deal with at best. The way you are allowed to respond to him consists of some shut-downs and put-downs, but occasionally is quite realistic, with the sort of appeasing compromise that a woman would make with an unwanted come-on in this kind of scenario. This, I can imagine, could be quite triggering to a lot of people emotionally because it does feel like a realistic scenario to be in.

If I were to mention a character from another work that Eric most reminds me of, I’d say, he’s Dr. Horrible. Thirteen years ago, Dr. Horrible was a creepy stalker in a white coat who was also totally the protagonist of the musical miniseries he starred in. We were supposed to root for Dr. Horrible. Now, in 2021, Joss Whedon, the author of this self-insert, is a known villain in his own right, and most of the culture has turned on him. We see the protagonists he wrote in revised forms and recognize them as villains so heinous that no amount of trigger warnings were sufficient. We’d rather date Captain Hammer after all, or, in fact, a literal hammer. That’s progress, baby.

What is anti-progress is people being so unable to separate art from the artist that they literally harassed the voice actor for Eric online, telling him that it somehow reflected badly on him to play such an evil character. It’s clear that some people still have some work to do where it comes to media literacy. I’m going to take the guess that most of the people who have this stance are young enough to have no working memory of Dr. Horrible’s Singalong Blog.

The people who are strong supporters of the game explained you can’t excise this villain from the game without completely changing it. Hot take: nah, you totally could. The villain exists in a different textual level from the dungeon delves. Eric’s story is more of an overarching arc, and the rest of the game moves in episodic ways depending on which weapon(s) you choose to date. The final boss of the second dungeon delve doesn’t factor into the meta story at all, and is totally optional to fight. You could remove the meta story, swap out the actual final boss for the currently optional final boss, and it would still be a full experience. The game would be weaker for it, I think, and I wouldn’t really vote for this change. But in theory, it’s totally possible. 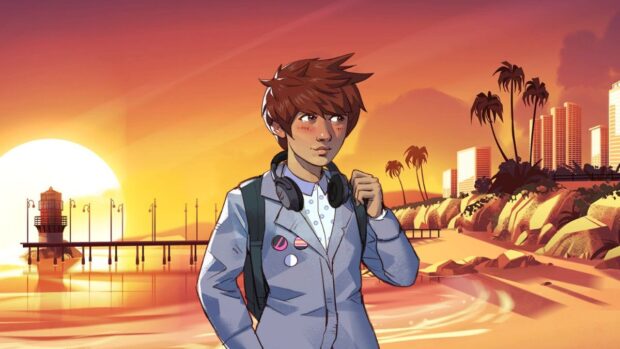 The experience of the villain is a little rough, but in a way I appreciate. But what about everybody else? Of the datable love interests, there’s three men, two non-binary characters, one woman, and a cat.

I dated everyone but the cat. I tried a few date sessions with the cat, and it was both awkward and boring. Some people told me they loved this storyline, so I’ll say I may be alone here, but I didn’t understand the appeal. In theory I don’t even object to dating a cat – I played both Cat President games on stream, and you date those cats! But those are talking cats, with human levels of agency, and this is just a regular cat. It’s not even a stray cat, which could lead to adopting the cat. It’s someone else’s cat, and you have to text the owner to say “hey can I hang out with your cat?” There’s no Shane Dawson moment as far as I know, but I also admit I didn’t stick around long enough in this storyline to find out.

However there’s something I didn’t see anybody talk about at all, which blew my mind. One of the non-binary love interests, Sawyer, while not a minor on paper, is coded as a kid in the story. They have a high-pitched 10-year-old anime protagonist voice, ask for help with their homework (in college of course), and put off general vibes of needing a mommy-date to help and supervise them. To add to this awkwardness, as a glaive in weapon form, they are the largest weapon. As a weapon, Sawyer is constantly referring to how large and unwieldy they clearly are, and, golly gee, it’s just… so embarrassing.

Hey. I enjoy seeing someone’s highly specific fetish. I honestly do. But this is a weird and surprising one! As someone who teaches college, having to argue with a professor about a kid’s late paper put me in a pretty weird position emotionally. If some irresponsible student brought their date with me to argue on their behalf, it would not reflect well on them. And, typically, I see people on Twitter cry about minor-coding in fiction at the slightest possible sniff of it, but I heard not a peep about this at all until I stumbled across it mid-game. I know I didn’t have to date Sawyer, if it made me uncomfortable, which it definitely did. But I did it anyway, for the memes.

The guy I personally thought was the hottest, a soft himbo type who turns into an axe, was not in the base game and will be added as DLC. I didn’t click with Seven, the laser sword, at first, but I eventually warmed up to him. Other than that, my favorite love interests were Rowan, the other nonbinary, who is a sensitive goth, and Valeria, the sole female love interest. At the end of the story, Valeria’s tale took a weird twist, and she ended up having too much baggage to truly be my OTP. And Rowan has a mansion, so that’s the way I’m leaning. 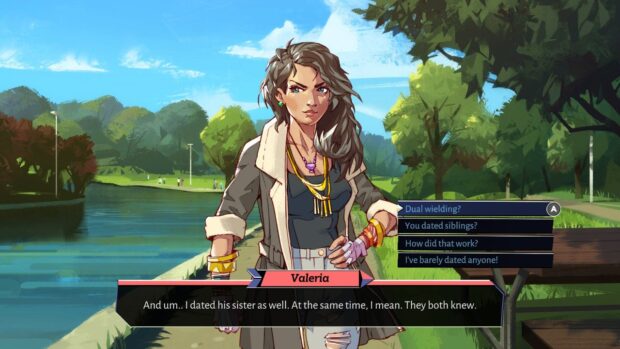 The bottom line here is that the writers of Boyfriend Dungeon did a better job writing a guy you definitely wouldn’t want to date than they did writing any guys you definitely would want to date. I may just be running in the wrong circles, but I think it’s pretty telling that a few months later, I’m not stumbling across any sexy fanart of these characters the way I did for Dream Daddy or — good Lord! — Hades. I’m not doubting that it must exist, I’m just saying I haven’t accidentally tripped over it the way Sawyer seems to be tripping over his own massive shaft.

Boyfriend Dungeon was charming, surprisingly fun, and very funny (in both intentional and unintentional ways). I really enjoyed my time with it. That being said, probably not my favorite indie this year. Other than writing this review, and cutting a highlight reel of my experience with it, I haven’t thought about it all that much since I put it down. I’m going to pick up the DLC to see if either of the new weapons added strike my fancy, and I might even stream my experience. Tune in to see me get embarrassed all over again by some new weird weapon dating horror.

Email the author of this post at aj@Tap-Repeatedly.com. I’ve got a few reviews I’m backed up on, so bother me on Twitter too and I’ll do it, I promise.

One Response to Boyfriend Dungeon