11/12/2011|Amanda "AJ" Lange|Impressions72
Home » Home » Impressions » Impressions: The Elder Scrolls V: Skyrim
Shockingly, I actually bought a game on launch day for a change, because the timing was right. This is another game where you pretty much know already if you really wanted it, in which case you’re probably a lot further in than me, who spent my first five hours with Skyrim yesterday after getting home. But if you’re one of those that’s on the fence, I’ll walk you through what my first impressions are with Elder Scrolls V (just Skyrim from here on out).

Now I’m running Skyrim on a fairly old machine – still running Windows XP and using a 8600 GT video card. As a result, I get a little choppiness, which you will probably also encounter if you’re on an older machine like mine. But, despite that, it’s a lovely game, a world with great mountain vistas and lots of leafy forests which seems to be composed solely for screenshots. 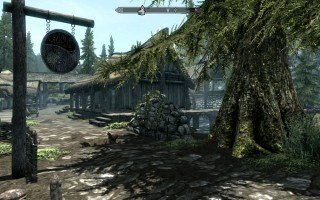 Initial character generation is not very time consuming in this installment, because you don’t pick a starting class. Instead, you pick your character’s race and facial attributes, then are sent in to the world and given a lot of initial starting options during a basic combat tutorial. Your skills level up as you use them. Level up enough skills, and you get a character level, which moves you to a character level-up screen. In this screen, you can choose perks that will allow you to get better at certain skills that you aspire to. In this way, your in-game actions have some control over your character’s destiny, but you still get to guide it a little.

I like to cause trouble, so I decided that I wanted to start with a thief character, and chose the cat-person race which seems to be one of the races most skilled at thievery.  It turns out though that being a pure thief may not be the way to go, since the game focuses heavily on combat and you’ll need some way to cause damage. Stealing also isn’t so profitable in the early game, since, as in older installments, shopkeepers won’t buy stolen goods from you. Somehow, they know. I’ve heard that you can fence stolen goods when you reach a speech skill of 90, but that sounds like much later in the game, so, for now, I’ve settled on only stealing goods I can use myself, like food and potions. But yes, if you’re wondering, the bucket trick does work. I did find it a bit harder to do than the video implies, because of the way the game controls. 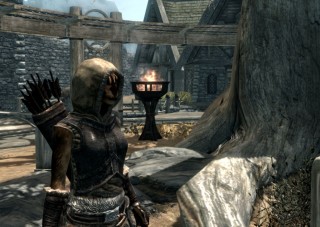 And that segues me in to talking about how the game controls, which, with mouse and keyboard, turned out to be surprisingly poor. The mouse sensitivity is just bad, even at the highest setting, and I felt as if I had to run the thing off of my desk numerous times just to see where I was going. The tutorial for some reason started me out at the lowest mouse sensitivity setting, and I thought for a long time that I just had no control during that part at all. My experience improved significantly when I hooked up an Xbox 360 controller to my computer. I could blame the fact that I actually played the previous Elder Scrolls, Oblivion, on the 360 (yes, I know, doing it wrong), but this just felt like a way more comfortable experience for me. The controller was recognized automatically and the sensitivity for looking around with the right thumbstick is much better than it is with the  mouse. I’ve heard that there are some user fixes for the mouse experience floating around already, so if you haven’t got a controller to use, and you’re having the same problems I was, you might want to try getting some help with the mouse controls. I actually can’t recommend playing the game with a mouse, which is weird for what ought to be a PC-first sort of title.

The combat in the game is actually fairly neat, as it’s improved on Oblivion by introducing a dual-wield setup. You can put one weapon in one hand, and another weapon in the other; these are activated by using the left and right mouse buttons, or, if you don’t want to be terrible, the left and right triggers on the Xbox controller. The setup I’ve found nicest here, after some experimentation, is to hold a destruction spell in one hand, and my thief dagger in the other for a sort of Bioshock feeling. You don’t have to lower your spell hand to attack with your weapon hand, so being able to quickly blast out a few fireballs, then go in for the stab, is pretty fun. 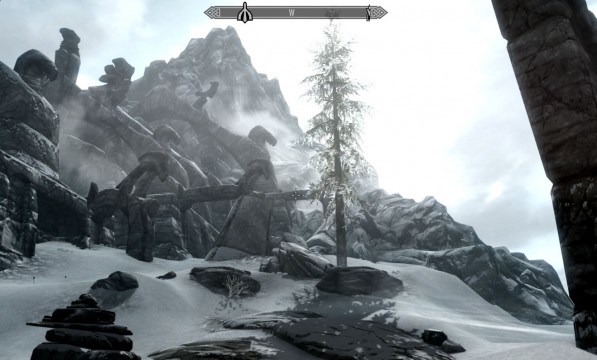 Now the big question, really, in an Elder Scrolls game is that of personal freedom. This tends to be polarizing. Some people thought Oblivion was the best of the series, whereas others, like myself (and Steerpike apparently) have come to prefer Morrowind for its relatively unbounded exploratory freedom. (The difference between Morrowind and Oblivion: “I played 30 hours of Oblivion, and I never even entered an Oblivion Gate!” compared to “I played 30 hours of Morrowind, and I’m not even sure what the main quest is!” Obviously, your mileage may vary.)  Keeping in mind this is only my first five hours in, but, Skyrim seems to walk… somewhere in the middle, here. Anecdotally, my first five hours are a lot like the first five hours of my friends who are playing, despite our different choices of race and favored weapons. The main quest is pretty clearly landmarked, with an NPC that leads you to the town exit and points in the direction of the first dungeon (for your convenience, pictured above). The game start is also sprinkled with lots of little tutorials to help you learn crafting and other systems that used to be a lot less documented than this.  I could blame “the kids these days” for this kind of signposting, but the truth is it’s really pretty helpful and I could just as easily blame myself for taking people’s advice instead of exploring on my own accord.

So, yeah, first impressions: it’s fun. Combat is pretty juicy and there’s thousands of little quests and random things to meddle with and do. If you really liked Oblivion, this should be a no-brainer, but if you didn’t like Oblivion so much, Skyrim might still grab you. Just play with a controller.

My Idea of Fun: Game of Lordly Caliber