Last time I wrote about playing the Neverwinter MMORPG my impressions were based on the closed beta, where I played a Trickster Rogue. The game has officially launched now, so… what’s the verdict?

To recap: here’s why I was excited about this game. I’ve never really gotten into a fantasy MMO before, and, unlike maybe 95 percent of the gaming population I’ve never played World of Warcraft. Any impressions you see here are coming from a refugee from City of Heroes, where we did the whole MMO thing a bit differently. But Neverwinter has one thing going for it that had me intrigued: Fourth Edition Dungeons & Dragons.

Fourth Ed is still one of those polarizing games. Any time I mention that I loved it, I get a weird combination of high fives and deep hateful frowns. Having not moved onto Pathfinder with the 3.5 crowd, I stuck with the brand and, I thought, was rewarded with a fun tactical skirmish game with a fantasy skin. It’s certainly different from the older editions of D&D but what 4E brought to the table for gamers was a tactical combat system with lots of energy and player options. It was almost – some dared to say – like an MMORPG.

Thus things have come full circle, bringing the legendary “tabletop MMO combat” back to the MMO. With the D&D brand slowly moving toward the more “oldschool” promise of D&D Next, the game that speaks clearest to Fourth Edition’s legacy is also going to be its swan song. This is Neverwinter, and it’s open for business. 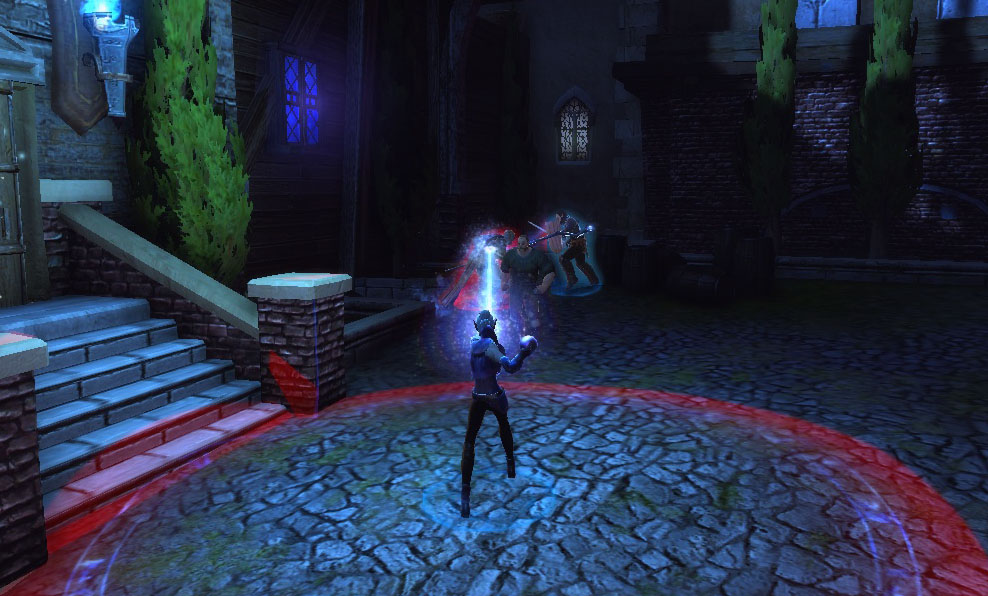 Combat in the MMO hasn’t changed much since beta. Wanting to try something a little different, I’ve started running a Control Wizard, and the play is still really fun. Point at things with the target and hold down the mouse to make them die, pretty much. The Wizard is a bit fragile, but she can lock down enemies with a whirlwind spell or by covering them in ice. There does seem to be basically just the one Control Wizard build – the ice build – so if you’re looking for huge variety among classes this game doesn’t really offer that just yet.  Racial features offer some minor differences, and you can also choose a god to worship and a backstory, though this is purely for flavor.

I’m pretty familiar with the lore in the Forgotten Realms, I’m invested in D&D as a whole, and I love game narrative. And yet I still find myself clicking through the game’s default quest text without bothering to read it. I know someone worked hard on that quest text and I should do my best to pay attention, but I, though I hate myself for it, don’t pay attention. And if I don’t, I’m betting most players don’t.  However, quests are also fully voice-acted. This seems to be increasingly common and expected in MMOs. I thought at first this wouldn’t make much of a difference to me, but it’s actually nice that after I accept a quest, the sound drop lingers in my menu and I can keep hearing important information (as long as I don’t deliberately cut it off). That way I can get back in the game, and still get the lore that someone worked so hard on creating.

Other lore drops take the form of text that appears in my menu which I can read at my leisure. I tend to let this go until I have some in-game downtime, so sometimes I have a hard time figuring out which lore is read and which is unread when I finally dive into the lore menu. If you don’t care about lore, the Fable-inspired glittery golden path (also present during the beta) hasn’t gone away, and generally will lead you easily to your next quest marker, no reading required. 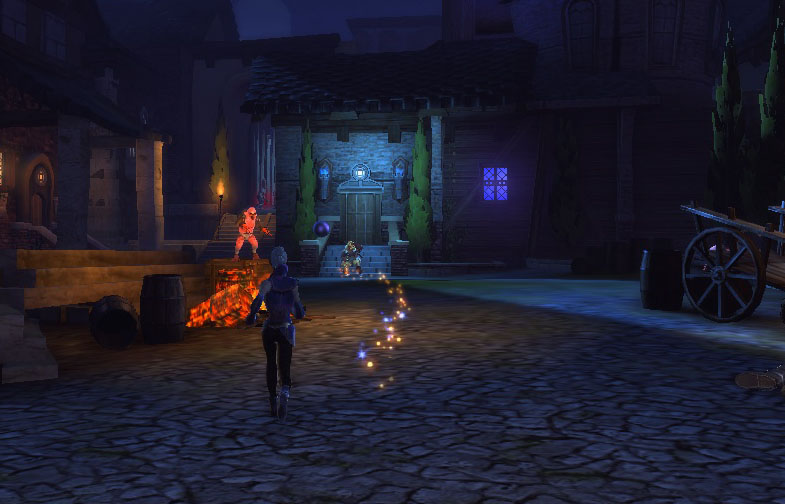 So what is different from beta? It’s tricky to say… and that was done on purpose. Neverwinter has been applying patches and balance tweaks for months, and did a “soft” launch on June 20. From all appearances this has confused some of the players. There was no post-beta wipe of characters or inventories following the open beta (though the closed beta was wiped). Since Perfect World was already charging players for mounts and gear and other in-game benefits, not taking away the stuff they paid for makes perfect sense to me. But be prepared for players to tell you that was totally not fair.

I still feel like it’s fair. Also, the monetization seems pretty fair for a free-to-play game. There’s no gated content and there’s not really a strong sense that I can buy myself into a lot of power. I could spend a lot of premium currency on gear, but I’d still have to at least level up to the point where I could use that gear. You can buy mounts and a lot of crafting boosts; these things seem to be things you want just because you want them, as they’re far from required to handle the game’s main content.

Crafting is a new system. The player can “hire” different types of artisans to create crafted items during downtime.  In this way you can work your way up to new pairs of pants or chainmail or other gear. I’m not too worried about heavy armor on a Wizard, but that’s available from crafting too. There’s also Alchemy, a brand new crafting skill that allows the player to craft potions. The best profession boosts seem to cost premium currency but the whole thing is optional. There’s also an off-line menu that allows you to use your crafting skills when you’re not logged in… in case you want to make some quick potions during your lunchbreak at work. 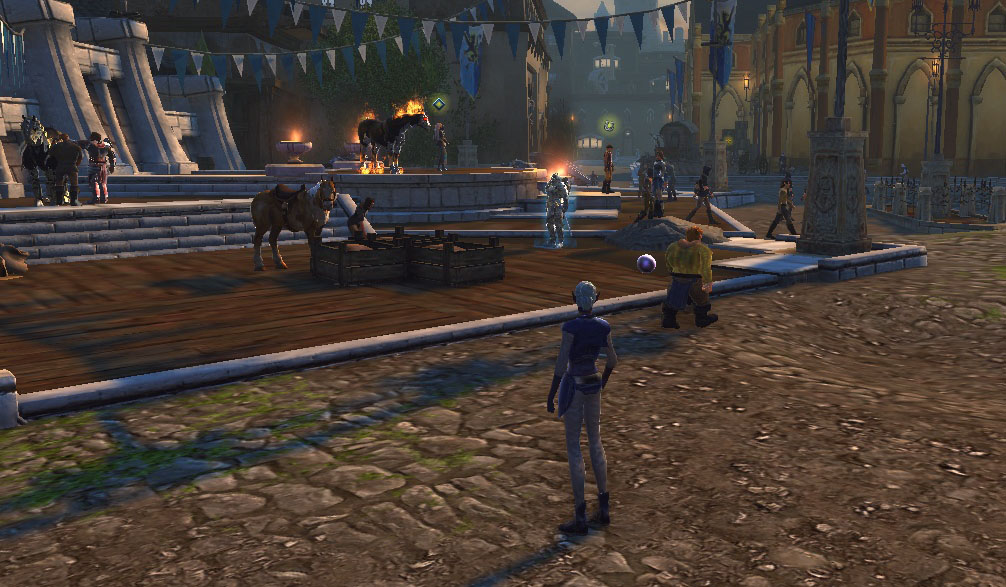 During Beta I caught a glimpse of the Nightmare, the shiniest of possible mounts, but there was no way to get her. Unsurprisingly, it’s a now a premium currency item, but there’s a twist. Play the game enough and you’ll receive Nightmare Chests. They’re just regular drops like anything else, but you can’t open them unless you have an Enchanted Key… which is of course a premium currency item.  This is a bit like the Team Fortress 2 crates. You may get Twilight Sparkle in your box, but you’re more likely to get some other desirable, but not sparkly-pony-like, items. Other premium currency items are cosmetic things like dyes and different hire-able NPC companions.

When I say the keys cost “premium currency,” in this case, I mean Zen, the real-money currency used in the Perfect World store. There’s also an in-game semi-premium currency in the form of Astral Diamonds, which can be earned through daily invocation, using the Auction House, or interaction with the Foundry quest-building system. Astral Diamonds are different from the coinage dropped by monsters and usually can be used to get better stuff. But if that didn’t seem like enough different currencies for you, there’s also Seals, which are tiered by level, Trade Bars which can be found in some item packages, and Honor… honestly this game has a dizzying and confusing array of currencies and items to trade.

I’m frankly not really used to having to juggle gear in an MMO. It feels like my poor elf changes her slippers every twenty-five minutes or so, because she found some marginally nicer slippers. But in spite of the gear treadmill, characters don’t all look the same to me; there’s a pretty good array of customization with the different dyes and armor bits. 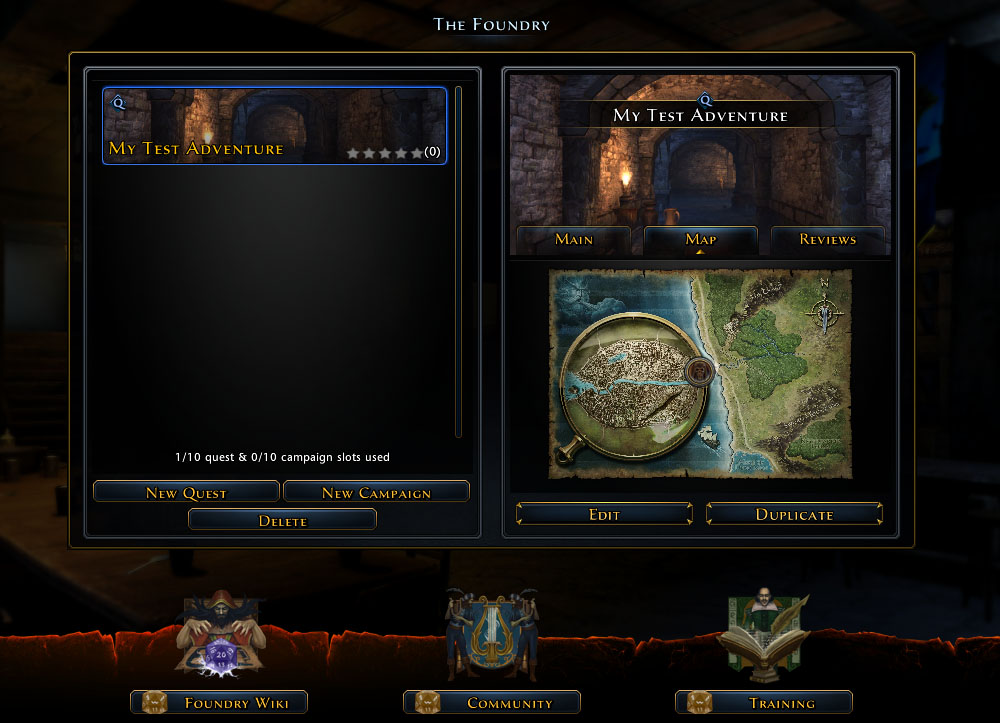 Though collecting stuff seems to be the main objective, I think the Foundry is what will give the game longevity for me personally.  I really wouldn’t feel like I’d played the game without having played a few Foundry quests and trying to create one of my own. The creation kit is actually pretty straightforward and reminds me a lot of the quest-creation tools that City of Heroes used to have. There’s only a small variety of map styles to choose from, but the maps can be altered in a 3D view to a large extent, with the addition of different objects and characters. With some clever manipulations structural alterations are also possible and teleporters can link one map style to another in the middle of a user-generated quest.

The game’s Daily Quest system is keyed to the Foundry, encouraging its use. I’m sure some players are using it by just farming the shortest missions, but I’ve chosen top-rated missions regardless of their stated length and I’ve generally been having a good time with the user-created content. Of course, it’s a total mixed bag, so be sure you read the description of a quest before taking the plunge. The game supports French and German-language quests as well as English.

Teaming is smooth enough, and required for some of the more epic dungeons. But the action combat, and the ability to use a hireling NPC, make the game pretty solo-friendly. I’ve only worked with pick-up teams so far but I haven’t run into any issues finding a team when I needed one or confusions with the team building systems.

Being free to try, this game is probably worth downloading just for the opening cinematic. Or, just watch it here:

I kind of love it. It shows a commitment to showing a diverse cast of characters and I can appreciate that.

I don’t know if the game will replace my bi-weekly D&D game, but as an adaptation of the D&D system in general there’s a lot to like about it. I can see myself spending a lot of my upcoming evenings in Neverwinter. Look me up on Dragon server, if you want to slay some orcs.