It was the final Guild Wars 2 closed beta last weekend before its highly anticipated release on the 28th. My brother, Lewis B, who left Tap a couple of months ago to write for MMOG site Ten Ton Hammer, invited me and fellow MMOG noob Steerpike to join him to see what all the fuss was about. Between the two of us, our combined MMOG experience before the beta weekend amounted to making a character in Ultima Online, killing a carrion spider in Dark Age of Camelot and spending eight minutes in Rift. We were surely destined for doom.

My expectations were high for Guild Wars 2 after all I’d read (and heard) from Lewis and on the whole they were met or surpassed with only a few things not quite hitting the mark. I didn’t get a chance to play Guild Wars 2 when it was showcased at the Eurogamer Expo last year but it was great to finally be able to sit down and get stuck in and take things at my own pace without worrying about my time running out. Steerpike and I didn’t meet up until Sunday so I had a fair few hours to bumble about on my own and get a feel for the game before we united like noobs in arms.

First up was the character creator which is just a lovely, lovely thing. I didn’t have a clue what race to choose as they all looked amazing: the Charr, the Norn, the Asura, the Sylvari, even the humans — male or female, and some painfully impractical armour aside — were beautifully realised. I didn’t have a clue what ‘profession’ to choose either as they too looked and sounded amazing. Eventually I settled on a Sylvari, a sort of plant-like humanoid, and decided to give the Necromancer a whirl as its abilities to cripple, weaken and drain foes would probably work well with my inexperience, buying me time where possible while I fumbled about. The character creator is accompanied by a series of questions that, in addition to your choice of race, determine the nature of your character’s personal story. This personal story acts as an overarching quest to give you some sense of direction and forward momentum, supplementing the usual sense of progress you gain leveling up, acquiring better gearing and visiting far flung corners of the world. From what I gather, it’s entirely optional too. Over the weekend however, I didn’t get a chance to pursue my personal story due to the countless other distractions that Guild Wars 2 has to offer. 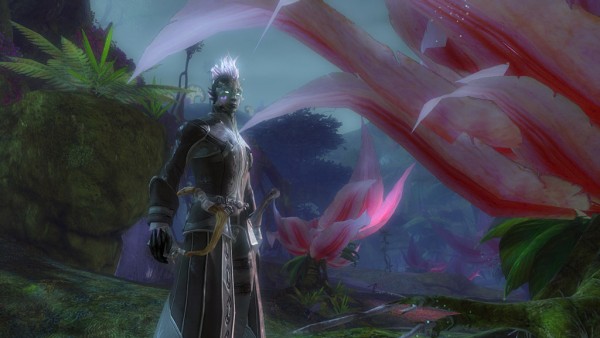 After creating my character I was greeted by a cutscene made up of the loose painterly art that’s become synonymous with Guild Wars 2’s identity. The cutscene set the stage for my personal story and the conflict I was about to take part in. Well, I’d like to have taken part in it but I spent most of my time incapacitated on the floor.