The image above makes me sad.

At the EG Expo last year I met some of the developers behind AirBuccaneers and they were a pleasant and chirpy bunch. They were situated right next to Guns of Icarus Online so naturally the two games were going to get compared throughout the entire expo. It’s a shame Natural Selection 2 wasn’t right next to the Aliens: Colonial Marines multiplayer stand, that would have shown Gearbox up; a triple A licensed behemoth being outclassed by a scrappy indie. Anyway, Guns of Icarus Online and AirBuccaneers are similar in that they’re both independently made multiplayer airship games and were both showcased and released around the same time over half a year ago, this makes them rather fascinating titles to compare today.

The thing is with dedicated online multiplayer games, they live and die by their playerbases. If they aren’t popular fewer people buy them, and if fewer people buy them the playerbase eventually dries up leaving behind only the hardest, most dedicated players or worse, nobody. In fact, ever since I got involved with poor old Brink, I’ve been quietly intrigued by player numbers. Unfortunately back then I wasn’t aware of many stat-tracking sites like SteamGraph, Gametracker and Steam Charts so had to rely on Steam’s ‘Top Games by Player Count’ chart which wasn’t ideal. When I was playing Brink I used to look out for where it was in that chart in comparison to other games, thinking things like ‘Wow, more people play that? Really?’ and eventually it dropped off the list entirely. I’d visit the Steam and Splash Damage forums and see users lamenting the game ‘dying’ but I didn’t see 100-200 players a day as dying, and still don’t. Afterall, you only needed six players per side in Brink to play a good game.

No, 4 players over the course of an entire day is dying, if not dead already.

As I type this, Natural Selection 2 and Chivalry: Medieval Warfare — two of my favourite recent multiplayer games — are both 66% off on Steam for the weekend as part of a special joint offer. Naturally, their player numbers are rocking at this moment in time. Chivalry has been looking solid since release and shows no signs of letting up while Natural Selection 2 has half as many users which I suspect is down to its steep learning curve, high skill ceiling, initial performance issues — which have now been remedied — and of course its very particular fusion of first person shooting and real-time strategy. And while Chivalry possesses a high skill ceiling as well, it’s conversely dead easy to pick up and start hacking limb from bloody limb. Unlike Natural Selection 2 which runs on Unknown Worlds’ own in-house developed Spark engine (an incredible bit of tech), Chivalry is powered by Unreal so it initially suffered fewer widespread hitches. Anyway, both games are doing swell, which is great because they both deserve to.

What bothers me however, are the forum doom merchants.

Over the last few days I’ve been perusing through the Natural Selection 2 forums, reading up on the recent balance changes, map alterations, engine improvements and feedback. While doing this I’ve noticed a number of posts and even threads cropping up saying that the game is dying, that it’s bleeding players. Technically speaking almost every online multiplayer game is dying in the long run, but when there are over 1000 players playing before a sale and nearly three times as many during and presumably for some time after, I’d argue that it’s anything but dying. These posts don’t necessarily pose a threat deep within the relatively hardcore forums of Unknown Worlds but when they rear their heads on a game’s respective Steam forum, accessible directly from the store page, they may hold a lot more sway on a buyer’s purchasing decision.

Sometimes these posts are a fair warning (see AirBuccaneers above) but when they’re patently untrue, it smacks of carelessness and unwarranted cynicism. Brink was never brimming with players but there were always a few full servers, and yet certain players went out of their way to scream ‘IT’S DEAD!1’ even when it was much livelier than it is now.

Thankfully on the Unknown Worlds forum these posts and threads were buried fast and are yet to make it across to Steam’s community, but it’s a trend that troubles me, especially for smaller games, like Guns of Icarus Online that have relatively fragile communities and depend so much on positive word of mouth. I imagine these doom merchants’ words are like self-fulfilling prophecies and in some way contribute to the snowballing effect of players abandoning a game. But I don’t know, perhaps I’m overblowing this and perhaps, ultimately, it is indeed the survival of the fittest and nothing to do with a few naysayers on a forum, but it surely can’t help.

The thing is, Guns of Icarus Online, despite its lukewarm reception on release and meagre publicity, is well and truly off the ground compared to AirBuccaneers which has unfortunately just kind of crashed and burned. But why has this happened? Rock Paper Shotgun were on board early and gave it plenty of positive publicity, from the original mod that spawned it, right through to the standalone title, and according to Metacritic it seemed to be better received than Guns of Icarus Online too. It was even cheaper and featured ship boarding, something that many criticised Guns of Icarus Online for lacking. I can’t say what made players abandon AirBuccaneers having not played it myself, but the Steam forum cites the lack of updates and communication from the developers being the main causes. I have no idea how true this is but as a first port of call from the store page the opening forum page looks decidedly grim and instils little confidence over the game’s future. 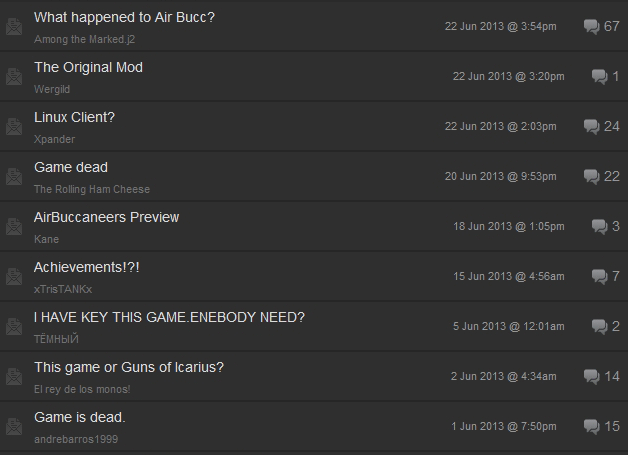 One of the things that impresses me so much about Muse Games, the developers of Guns of Icarus Online, is the monthly updates I get emailed to me outlining changes, additions, future goals, events and what they’re currently working on. It never feels like its stagnating and I honestly think that goes a long way in ensuring players keep coming back and keep talking about the game. I’m sure it’s also helped that Muse Games recently launched a kickstarter (and met their goal) for a future singleplayer and co-op adventure mode which many players have been requesting since the game was released. Nevertheless, their dialogue with the community is exactly what it needs to be.

Another thing I’ve noticed, which also concerns me and makes me sad, is the idea of turning a flagging game free-to-play to attract more players in a bid to boost the playerbase. It’s not necessarily the thought of micro-transactions and in-game purchases sullying the experience, or the house of cards economics of it, it’s the desperation of it and the thought of a game going free-to-play and still failing to attract and retain players. If no one wants to play when its free, where do you go from there? This is something that is surely going to happen more often as more and more multiplayer focused games compete for a slice of the same pie– perhaps even a slice of the same slice.

Incredibly, at the time of writing, DOTA 2 has 215,904 players playing it simultaneously and some 300,000+ at its peak today (and it’s still in beta). That’s more than TF2, Civilization V, Football Manager 2013, Skyrim, Counter-Strike: Global Offensive and Borderlands 2 combined. I’m yet to play it, but that’s an immense number, dwarfing some of Steam’s greatest stalwarts, new and old.

Only the dead multiplayer component of Bioshock 2 raised a smile for me. No, not because I took pleasure in seeing a perhaps ill-informed game mode in a primarily single-player driven experience fall by the wayside (apparently it was excellent, it just wasn’t cultivated), it was because the total and all-consuming absence of players made the relatively untouched pre-Civil War locales of Rapture — Arcadia, the Farmer’s Market, Fort Frolic, Hephaestus, the Kashmir Restaurant, the Medical Pavilion etc. — suitably and hauntingly quiet. Here was a place that was supposed to be populated by people (both within the fiction of the game and the game mode itself) and it was deathly still. In fact, the prospect of somebody being there while I roamed those deserted halls creeped me out more than any splicer ever did.

To contact the author of this waffle email greggb@tap-repeatedly.com