As I’ve mentioned a few times my PS3 is a relatively recent acquisition, and so I missed on some otherwise must-have exclusives during their launch windows. In honor of the release of Beyond: Two Souls this week, I decided to skip it for now and instead fire up its spiritual predecessor, Heavy Rain.

I thought I might not have much to say about Heavy Rain, but it had me at “Press Start,” and not actually in a good way. I should point out that Mat C loved the game, and since I’ve personally just begun with it I can’t claim anything he says is wrong. I usually like games that are designed to be played more than once, and it isn’t to say I’ll hate the game or its narrative by the end. But boy, did the game design make me want to snark. Entirely on accident, I started live-tweeting my impressions as I had them. Now it’s got momentum and I don’t have much reason to stop. So, if you’re interested, follow the hashtag #ajplaysheavyrain on Twitter for the next couple of days. If you’re definitely not interested, or don’t want to be spoiled for this game, best avoid that hashtag then!

What is it that jumped out at me so much? I’m going to talk in a bit more detail about two design flaws in the game that made a bad first impression. These aren’t cosmetic things like voice acting or screen tearing. These are design choices that are clearly deliberate, but would have been just as easy, or even easier, to do differently and better. 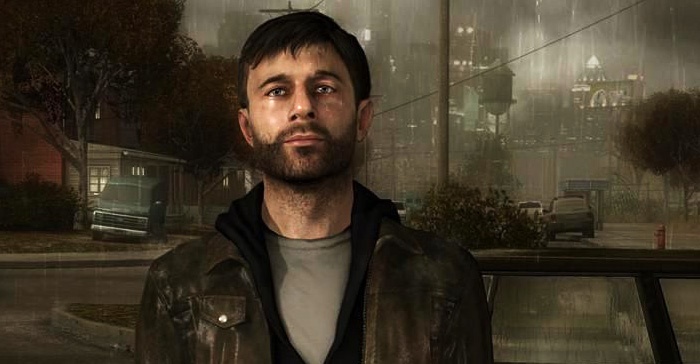 Bad Choice One: The Game Has Multiple Difficulty Levels

In a skill-based game, something like Bayonetta or Jamestown, it’s a good idea to have a variety of skill levels. This allows beginners access to the game and a method to learn, while giving experts something to strive for. Mastering fair mechanics at a high level of difficulty is a rush. On the other hand, in a game that’s mostly narrative-driven, difficultly levels are a distraction. Deadly Premonition: the Director’s Cut did away with the multiple difficulty levels from the original title and dropped the game’s actual difficulty to close to its basement. This is the correct choice, allowing the game’s story to shine through without its clunky combat mechanics getting in the way. There are some story-based games that have done multiple difficulty levels well, but this involves increased granularity of what I might and might not find difficult and clear communication of what those difficulty levels will mean for my experience.

For the record, I lied, and told the game I was not familiar with the wireless controller. In other words, “Just give me Easy Mode, Heavy Rain.” It seems that if from telling it that, I have a smaller variety of buttons to memorize during Quick Time Events. I’m not really seeing where that is a huge detriment to my experience. Imagine the hypothetical: “Oh, Heavy Rain was good, but if only it asked me to hit the triangle button a little more often, it would have been great.”

It’s possible the game always wants me to be at the ragged edge of failing QTEs so that it can show off how it continues anyway, even if I fail. But I’m savvy enough to choose to fail if I think that will lead to an interesting outcome. An actual beginner will fail naturally no doubt.

What would have been better? A gently adapting difficulty curve that occasionally throws new button presses at me if it sees I’m doing well, and takes them away if I keep failing and doing poorly. The game has to track what QTEs I passed anyway, and already has these button press combinations pre-programmed, so I don’t see this as a terribly hard change to make. But if that’s impossible: just set it to the easiest setting and get on with the show. 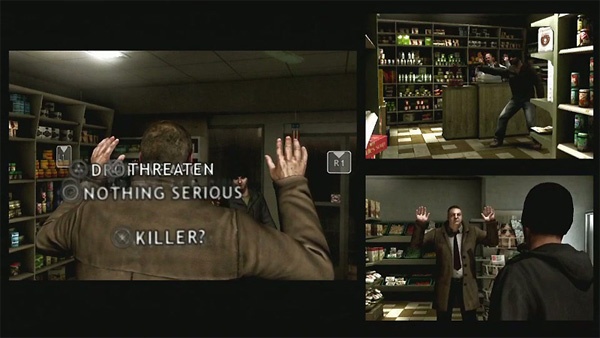 Bad Choice Two: The Game Requires Both Hands On Controller

Heavy Rain breaks from 3D navigation tradition by putting camera controls on the left thumbstick rather than the right thumbstick. This doubles as the player-control, since the left thumbstick controlling my “look direction” is also how I change my “heading,” and I have to hold down the R2 button to actually move. It’s sort of like giving the typical tank or car controls to a human body. It would have been equally easy for the developers to put the “locomote” (the gas pedal) instruction on the left trigger, or leave the camera controls on the right. But Heavy Rain makes the very deliberate choice of requiring both hands to navigate the environment. When I want to access my character’s thoughts, I hold down the left trigger, and then push a button with my right thumb to actually read the thought. Again, this is a “crossover” gesture that requires both hands.

To explain why this is stupid, let’s look at a really good game, EarthBound, recently re-released on WiiU. A cool thing about EarthBound, at least in its original format, is that you can play most of the game with your left hand. A few quick controller shortcuts using the “Select” and “Left Trigger” buttons make this a very ergonomic choice. While you’ll probably want both hands for an intense battle, it’s nice to just play the game with one hand while you’re wandering around towns having chats. It has baffled me for years why no other RPG stole this control scheme, until the Wii came out and just gave us a one-handed controller altogether.

Before you make the joke about how I must want to play Heavy Rain one-handed for prurient reasons, let me assure you that I’m way more into bad boys than depressy single-dad types. The fact is, I wanted to play Heavy Rain one-handed because I was eating a microwave pizza. I didn’t want to play it one-handed during some kind of intense fight scene. I just wanted to play it one-handed while I was banging around the shiny starter house talking to my children and doing mundane tasks. I think this is reasonable.

My guess is that Heavy Rain always requires two hands because David Cage wants us to have a “lean-in” experience that requires our concentration. This is a fake, phony way of generating interest. A movie doesn’t require that I have both hands on a controller, and is happy to let me munch on popcorn while I watch it. A movie has other ways of keeping me engaged, and if Heavy Rain wants to be a movie so badly anyway, maybe it could use some of those ways. If it’s okay with being a game, rest assured that I have been engaged by EarthBound for literally decades. 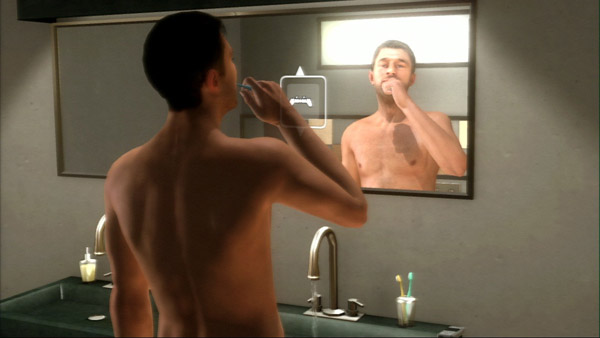 Oh, and these events where I have to vigorously shake the controller can go right to Hell.

I did not pick up Heavy Rain expecting to dislike it, and my default mode of examination isn’t necessarily a negative one. But I will say Heavy Rain is going to be a hard sell for me compared to some other critics. First of all I’m coming to it late, and when a game idea is less new it’s easier to notice the flaws in execution. Last year The Walking Dead did this sort of thing in a way I enjoyed and is still fresh in my head, and that is creating a frankly unfair bar for Heavy Rain to hit. I already know all the plot twists in Heavy Rain from years of reading about it, so they won’t have shock impact. And most importantly I personally have no interest what-so-ever in merely being a dad.

Like I said above, if you’d like to see more live impressions please read my Twitter feed. On the other hand, if you want to mock all the dad content in modern videogames with me, use hashtag #dadfeels on Twitter which I think is starting to catch on.  Although some people are using it to post sincere videos or pictures of their children, I find this just adds to the heady dadfeels mix.

Side by Side: Battle Bolts