It’s been almost a year since I first posted my early thoughts on Neverwinter, the upcoming Dungeons and Dragons MMO by Cryptic. This week, the game is rolling into beta, and some lucky folks who have been following the game got access to early launch. I was pretty excited about this game last year, and this year I finally got to play it and see if it measures up to my expectations. We also got a Q&A from some of the developers to answer any additional questions we might have about upcoming features.

My beta impressions after the jump!

Normally when starting in a new MMO I linger for a while on character creation, but I was just eager to start checking out the game. So I made a human rogue, and then hit the “random” name button. I know, scandalous. Anyway, her name is Miri. You’ll be seeing some of Miri’s screencaps in this writeup. I’m not running this game at 100%; my gaming PC is a bit long in the tooth. Even so, Neverwinter looks great and runs smoothly. This is just to keep in mind that, when you see the play screens I’m using below, your game will likely look better than this. 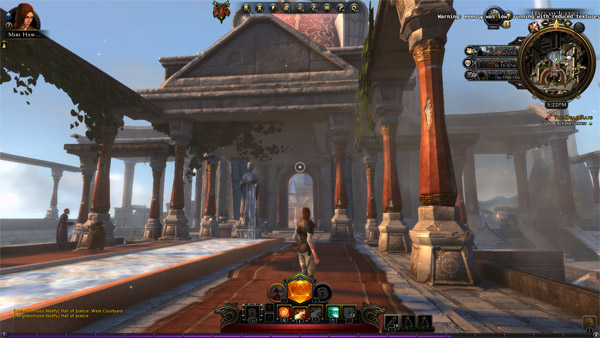 I even left the “this is lower graphics settings” warning on this one. Click for big.

The available starting classes currently in the game are Trickster Rogue,  Devoted Cleric, and Guardian Fighter. Two more classes: Great Weapon Fighter and Control Wizard (the class I saw last year at PAX) are going to be added before beta is over. Yes, the two-word class names are intentional, if a little awkward. Essentially it’s a way for Cryptic to add additional builds of classes later when they continue to expand the game, without having to stray too much away from the names of real D&D base classes.

Miri is a Trickster Rogue, and though I picked this class at random, I’m glad I did. Trickster Rogue (do you mind if I just say Rogue? No?) is the current DPS class. Play with the Rogue is light and quick. I just face the enemy I want dead, hold down the left mouse button, and the Rogue charges forward in a flurry of dual-wielded knives. A thrown knife is on the right mouse button if I want to start my attack from range. And to get out of the way quickly, the Rogue also has  dodge roll ability.

Each class also has a number of Daily and Encounter powers to use. For example, Miri can use Bait and Switch, which creates a shadow clone of herself that enemies will attack instead of her. The cooldown on the Encounter powers is pretty fast, but Daily powers are governed by the big glowing D20 meter on the bottom of the screen. The Daily Power only recharges when a class has performed enough of its role. In the case of the Rogue, it recharges when I do damage, which suits me fine. 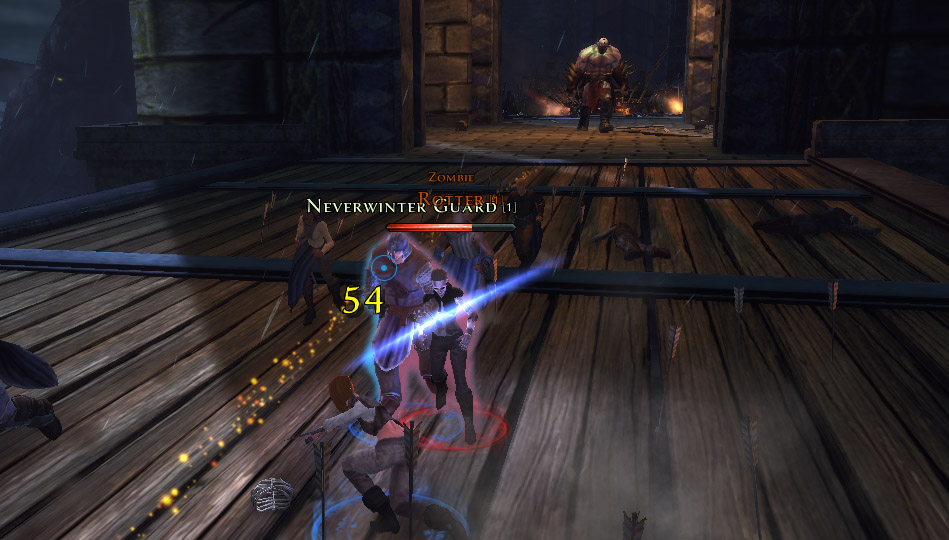 The action combat is pretty responsive by MMO standards. Of course the game isn’t highly populated yet, but I didn’t feel as if it was lagged down. Once nice feature is that the game alerts the player of the blast radius of any enemy spells, showing me the ring I need to dodge roll away from to escape damage. For fighters, who need to stay toe-to-toe with the enemy, enemy attacks are pretty well telegraphed and give the player enough time to raise a shield. It doesn’t take too long to get the hang of it.

Neverwinter goes to pains to make the player feel powerful even early on. Enemies seem to go down pretty fast and in great number, and the combat animations are slick. The player will actually gain two levels in the tutorial zone, which is just so that all of the class’s main attack powers are unlocked.

One downside to this “your class is your build” approach is there’s not a lot of build variety. Trickster Rogues mainly all do the same thing. As I leveled up I had the opportunity to choose Feats for my character, but, much like the 4th Edition D&D rules that are a strong inspiration on this title, they have less to do with my performance than my power selection. I’m only level 11 right now, but  my understanding is that the biggest variety comes not in the powers that I have, but in which powers I select to hotkey and use frequently. The amount of hotkeys in Neverwinter is actually limited and only certain powers can be in the active tray at the same time. 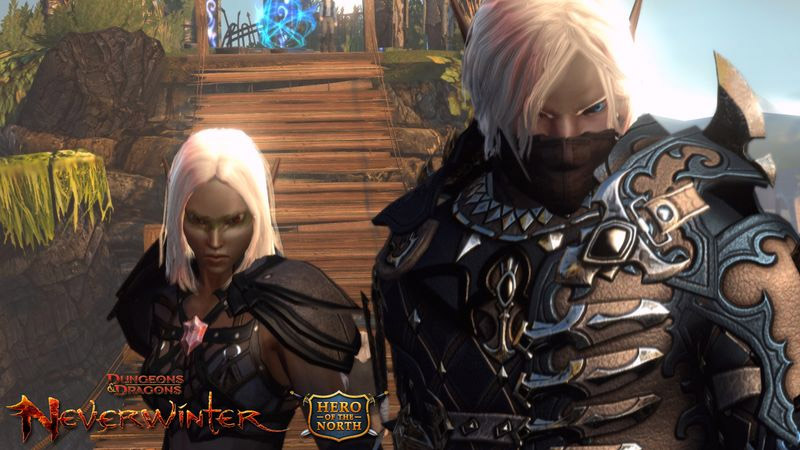 Starting races in the game are Human, Half-Elf, Elf, Dwarf, Halfling and Tiefling. There might be more to come (I’d still like to see Dragonborn, but that’s just because hooray 4E). There’s no class/racial restrictions and any race can be any class. Races provide a small bonus, which may influence your class choice.

Tiefling (which, for those with no experience at this, is a type of demon race) so far seems to be a pretty popular choice. But say you’re a teenager and that’s not goth enough for you. No, sir, you want to be a drow, the race of true champions. In that case, you’ll be paying for the privilege  to the tune of $199 when you purchase the high roller Founders Pack for the game.  That is the price you will pay to be Drizzt and have a sweet Dark Elf with a sweet panther companion. (EDIT: check the comments below for a little more information on this. There may be a free option for drow – the Pack includes the Panther companion and other goodies though.)

And to be honest, I kind of think that’s fair. Good Drow are supposed to be ultra-rare, but they’d be an amazingly popular race if they were fully unlocked for free players at chargen. Charging a premium is a good way to keep them rare, while providing a service that some fans won’t be able to resist.

What won’t be locked for free players? Content, at least according to the developers. The claim is that even free players will have access to all the content in the game. Devs are a little mum on their full monetization plans, but insist the game won’t be “pay to win.” If the pre-order packs are anything to go by, real-money options will include exclusive races, exclusive mounts, consumable items, cosmetic items, and in-game money which can then be traded in for armor, weapons, etc. There also appears to be a way to purchase additional character slots. 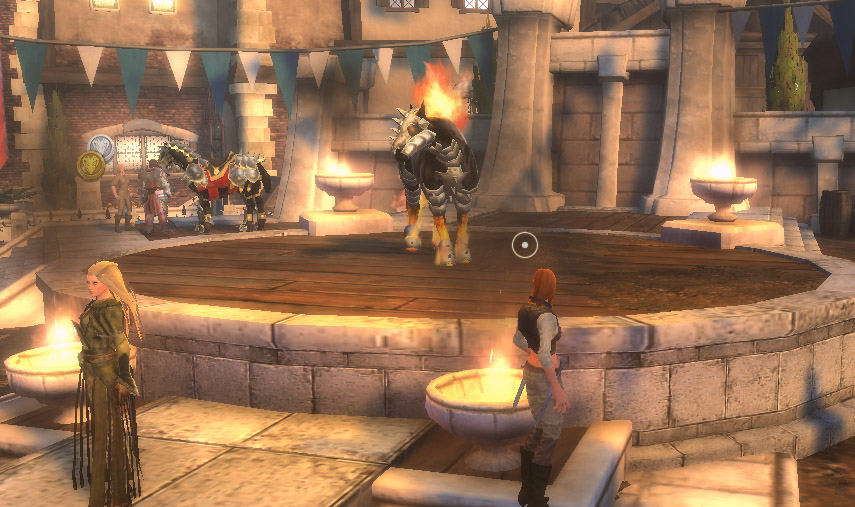 Mounts look sexy, but so far I don’t see too much usefulness for them other than bragging rights. There is a beautiful, taunting Nightmare on display in the stables that many players are already coveting. But traveling around in the game is actually done on a mini-map, which allows fast-travel between important zones and instances. This has its good and bad points. There’s no traveling through a lot of empty nothing space to slow down the adventuring. But a lack of empty nothing space can make the world feel smaller and less epic. This feeling is mitigated somewhat by the stunning vistas that you can see standing on hilltops, but you cannot go to all of the places that your eyes can see.

The game is all about keeping me on task, with a togglable, Fable-esque Golden Path that leads directly to important quest objectives. There are a lot of interesting things to see in town if you can resist the lure of the path (or turn it off) and just go wandering. The marketplace in particular, full of shouting vendors, has a great atmosphere. But, largely I would describe the play as task-oriented, with a big focus on the action combat components. That may just be the way I approached it, but the biggest rewards come from questing and handing in quests rather than exploring the city without a goal in mind. 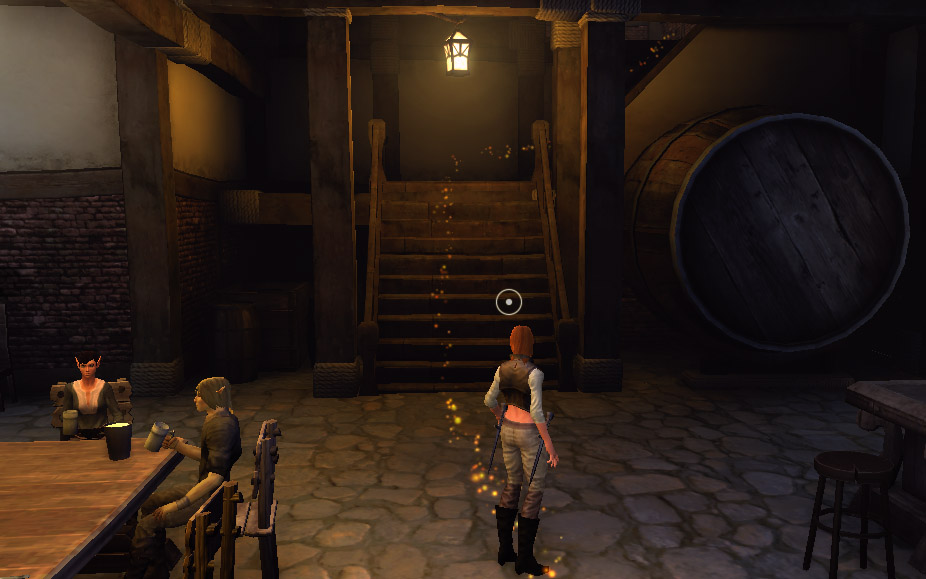 Exploring is just another word for “getting lost,” anyway.

The game does have PVP, which currently exists in the form of an arena-style domination. Time constraints prevented me from participating yesterday, but hopefully I’ll take a stab at it (ha ha) during a later beta session.

As a veteran D&D player, I came in with some lore questions. Here’s the answer to most of them: Fourth Edition. 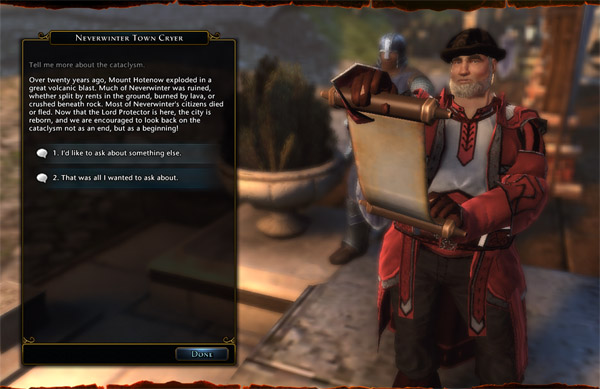 ‘Nuff said? If you care about this stuff, you already know what that means, and if you don’t really care, it won’t get in your way very much. Quest text is serviceable fantasy stuff. One thing I noticed was that some questgivers, though not all of them yet, were fully voice-acted. The developers state they intend to do a full VO pass on all in-game questgivers since it, quote, “really brings the game to life.”

This brings me to my biggest concern about the game, which is, basically, there’s not a lot of content yet. The starting area and tutorial is the same for all races, and primary quest chains appear to be largely the same. Leveling up largely seems to happen at quest milestones; there’s not much reward for random combats. If I do end up playing on an alt (and I do love alts), she’s probably going to have the same adventures, largely, as my first character. The Beta however is capped at only level 30, and content has been teased up to level 60 in the future. So it’s possible this concern will be addressed, but, so far, this feels like a very small game.

One of my most-anticipated features in the game is the Foundry, the player-created content section. Foundry assets will also be free for players to use according to Cryptic devs. Hopefully the Foundry will serve the purpose of adding additional content to the game and keeping it varied. If so, Neverwinter may become the MMO about running a weekly D&D campaign for thousands of your closest friends. I’ve just dipped my toe into this system, so I’ll be posting full impressions of Foundry options in a later article.