It’s been awfully… quiet… around here, something I know is unrelated to my own (temporary) inability to speak, and something I choose not to attribute to my recent injury-addled adjustment (now undone) to the top banner so thoughtfully provided for us by our own Gregg B. Instead I choose to believe that everyone is just… busy, and my frantic attempts to have someone, anyone, look at the GOD DAMNED PHP IT WILL TAKE YOU LIKE NINE SECONDS TO FIX I HAVE BEEN FIGHTING WITH IT FOR FIVE DAYS help me out with some tech stuff are not so much my mute voice falling on cruelly deaf ears, but on ears carrying out their own appointed duties.

I had kinda thought the aforementioned Gregg, being our great lover of and expert in indies, might have mentioned this one – plus I’m honestly not sure what to make of it. Independent developer Jason Rohrer found (indie) fame for his simple, haunting game The Passage, one which (for obvious reasons) reminded me of and disturbed me as much as the once-more aforementioned Gregg’s find Every Day the Same Dream. Rohrer’s newest work, Sleep is Death… well, as I said, I don’t know what to make of it. I do know that it has a chance to be the start of something big.

One of my oldest and dearest friends is a great lover of all things gaming – roleplaying mostly, videogames a little less so; but mostly he loves his friends and hanging out with them. Unfortunately, life after college changes things, and for us it’s been well over ten years. Many of my friends, including this one, live in faraway cities or even distant lands that I may never visit. This friend of mine who loves his roleplaying so much really misses the lighthearted days of undergrad, when eating nothing but tacos and vodka for a week meant nothing more than a vague sense of unease about going to class. He misses access to the things he loves: his games, his friends. 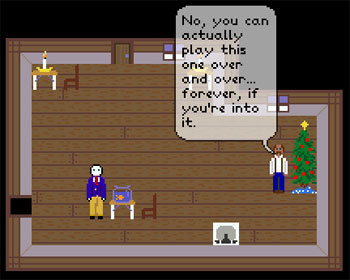 Sleep is Death could conceivably change all that. Here is an on-the-fly, real-time adventure creator for two (and I imagine could be pretty easily Rohrer-reengineered to accommodate more). On one end is the game’s referee, on the other is the player. You create a story together, one that can be exciting, sad, scary, funny, anything you choose. The ref pulls in – in real time – objects from a vast user-created database of stuff, building a world (did I mention in real time?).

Meanwhile, the player acts and reacts to the objects, characters, and places (in real time) the narrator chooses to add. Flipbook images of Sleep is Death adventures, described by Rock, Paper, Shotgun God Alec Meer, put it this way: Sleep is Death stories “read so well after the event, like tiny, mysterious comics from another world.”

Check this one out, also referred by Meer. While it may seem a sort of Coraline-esque adventure, like all things created by Jason Rohrer I found it hauntingly human and strangely disturbing. I just. Don’t. Know. What. To. Make. Of. It. Or him, frankly. I find Rohrer’s work both upsetting and exhilarating: the first because, frankly, some of that shit’s disturbing, yo; the second because, frankly, only a brilliant indie developer would have the courage and liberty to do such a thing.

The reason I brought up my buddy (hi Vince!) earlier is that Sleep is Death seems so him. There he is, living and working in a far-flung realm. He gets to come home and see his friends just a couple times a year. And he does so love his gaming. While the technology and visuals of Sleep is Death are surely primitive compared to some of today’s slicker productions, I can’t help but feel that there’s the opportunity for unbelievably personal and genuine connections between individuals and through narrative here.

RPS have been following Sleep is Death from day one, and this post is mostly to communicate the existence of the game to any of you Tap readers who might not be aware of it. It’s available, it’s growing every day. Yes, you have to pay a small fine to get it out of impound, but you do get two copies – one for the player and one for the narrator, and of course you can switch off. It’s nice to support art in games. Roger Ebert and I don’t share much in common except a current inability to speak; one of the subjects regarding which we differ most greatly is whether or not games are art. In that battle of wills, he is the cantankerous, future-fearing old grouch; I am the kickass young ninja of awesomeness-fueled new media defense. Silently we battle, me signing “fuck yes, games are art” while innovators like Jason Rohrer fearlessly do the hard work of actually proving it.

16 Responses to Like Tiny, Mysterious Comics from Another World