Brandon Sheffield, Senior Contributing Editor at Gamasutra and Editor Emeritus of Game Developer magazine, has announced in a recent op-ed that it’s time to retire the word “gamer.” This meme comes up once in a while – don’t call them games, don’t use the word gamer, etc. – always with the same basis. It’s derisive. It minimizes the medium and the hobby. Yadda. These articles, including Sheffield’s, usually leave something out, though: what “gamers” should be called, if they can’t be called “gamers.”

Technically speaking Tap-Repeatedly is not a “games” site. I generally refer to it as an “entertainment media and culture” site, more to prevent painting ourselves into a topical corner than out of any sense of shame at the gamer concept. And since Sheffield is not wrong – “gamer” is sometimes used derisively and can have a negative connotation – refusing to pigeonhole the place has the added benefit of making it look a little better on people’s CVs.

Featured contributor to Tap-Repeatedly, a popular online magazine devoted to entertainment and culture

That we do generally focus on games is the result of many factors. Our roots. Our interests. The writing staff we happen to have. And because of the games focus it wouldn’t be wrong to call the place a games site. After all, most of the people who visit are either

Anyway, Brandon Sheffield notes in his article that the words “gamer” and “gaming” were banned during his time at Game Developer magazine, based on the not-incorrect claim that it was a synonym for gambling years before video games were invented. The flaw in that argument isn’t it’s veracity, it’s the amount of water it currently holds: I don’t think most people associate the word “gamer” with gambling any more. Now, gaming, perhaps. But gamer? Harder to conclusively demonstrate, and even if it were still the regular connotation, there’s no law saying it can’t be changed. 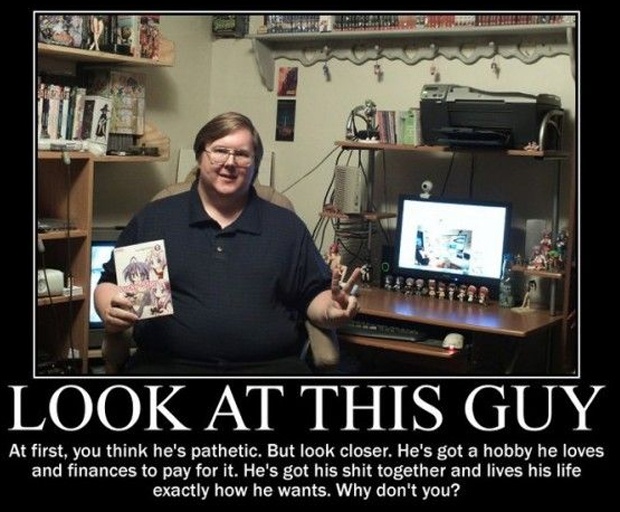 Don’t get me wrong, I’m not disagreeing with the core of Brandon’s argument – namely, that “gamer” is a word fraught with negativism in some usage. But I do think he carries that viewpoint a little far:

But that impression of the game player as a do-nothing, thoughtless drone persists to this day. And that impression is perfectly encapsulated in the word “gamer.” That is the word marketing people created to target and describe the basement-dwelling manboy. The person who just wants to play games and cares about nothing else. That person who only exists to shriek with horror and offense on internet forums about something he or she absolutely loves. And yet we have embraced this word with open arms, and proudly display it on our twitter tags. Microsoft even has its Gamer Points.

The word “gamer” was not invented by marketing. It was invented by… English. In fact, Marketing departments might well have been the ones warning that the word “gamer” might wind up being perceived negatively. You don’t need to analyze too deeply to figure out the origins of “gamer.”

A gamer is one who plays games. Even Sheffield remarks on this – moviegoers, concertgoers, etc. His argument that “gamer” has much more stigma associated with it than “moviegoer” isn’t wrong, but I see that as more a matter of time passing and increasingly widespread social acceptance than anything else. Practically everyone is a gamer right now (Solitaire and Angry Birds count). People who call themselves “gamers” tend to do so because it defines their preferred form of entertainment. It’s their answer to “what do you do in your spare time?”

The word “gamer” is regressive. It accepts the portrait of us painted by the mainstream news media, and every time I hear it or read it it actually makes me feel a little sick. I believe in this art form, and I believe in the people who make it. That’s why I am so hard on this industry, because I believe that as great as it sometimes is, it can get better.

Again, I don’t precisely disagree, though I think he’s running that ball a little farther than it needs to be run. You feel sick when you hear the word? Damn.

I don’t mind the word “gamer,” myself. I don’t love it, but I don’t mind it. I use it knowing that it can carry a very negative connotation, but I also use it knowing it’s the best existing term. Sheffield doesn’t really go into alternatives in his piece; he just says that “gamer” has to be retired.

In favor of what? Sheffield briefly mentions the word “fan,” but then seems to dismiss it. Are we to invent a word, then? Is the medium of the video game to be renamed the Audiovisual Ludic Experience? or should we go with Interactive Fiction, like Chris Crawford keeps saying we ought to (mostly, so far as I can tell, as a way of avoiding making games)? The scientific and critical study of games and gameplay is “Ludology,” from the Latin ludus, meaning game.

I’ve got it! Rather than the term “gamers,” we’re LUDDITES.

I agree that there’s stigma, and I agree the terms hurt us from time to time. But without a plausible alternative to adopt, complaining about the word “gamer” is just that – complaining.

Besides, there’s another reason to stick with the term “gamer:” I personally use it to judge other people. When they hear that I’m “a gamer,” or that I work “in gaming,” I’m able to quickly determine, based on their facial expression alone, whether they’re a person worth wasting my time with. That’s a silver lining right there.

8 Responses to The Part You’re Missing