Community, Dan Harmon’s ensemble comedy set at a wacko community college, is one of the most truly geek-friendly TV shows of the past decade. The first time I ever watched Community was the Dungeons & Dragons episode: among the most accurate representations of tabletop roleplay ever put to network television. There was also an entire episode of Community that took place inside a pixel art video game.

It occurred to me just last week as I was watching this episode: the internet is full of wonderful things. Could that video game be a real thing now?

Should I have even doubted? 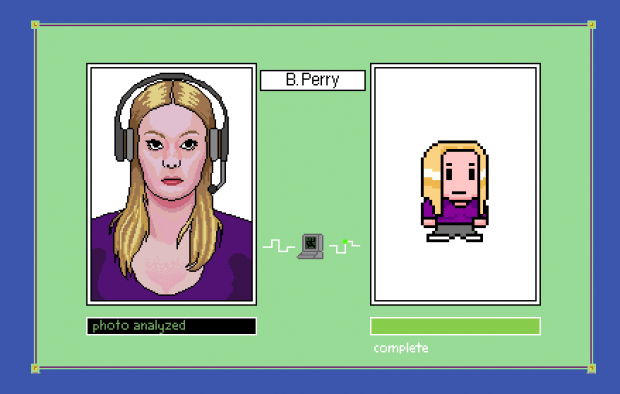 As my luck would have it, the mostly-final full playable version of the game was released just last week. It was developed by a group of enterprising Redditors, bravely toiling on art, sound, and code while ever mindful of the lurking threat of the dreaded Cease and Desist.

This game is amazingly accurate to the game portrayed in the episode. Watch the episode first if you haven’t yet (and if you can find a way; I caught up on the show using Hulu Plus but I am sure there are other options). Then try out the game. Obviously there are a few things in the game portrayed on television that are just fantasy, like the seemingly infinitely deep conversation trees, but the released game does try to stick to the spirit of the Community-portrayed game whenever possible. The fact that the developers got so close to this fiction is a testament to the open-source nature of the project, uploaded to a Github where anyone can contribute. This approach results in a credits sequence full of weird Reddit screen names. It’s set to a midi-sounding version of the song “Kiss from a Rose,” of course, because Community.

Aside from fandom gushing, how is Journey to the Center of Hawkthorne as an actual game? Well, the platforming is a bit unforgiving, so I recommend a controller. Split-second jump timing really starts to creep up on you somewhere around the Mexico level (called The Valley of Laziness). It’s made more difficult by the fact that characters take fall damage if they drop too far. The boss battles, on the other hand, aren’t too challenging, as long as you’re collecting the weapons you find along the way. The game is also surprisingly deep, with different subquests that can be encountered during or after main play and lots of cute NPC conversations. If you get to the end, there’s even a little Greendale Campus area to play around in! 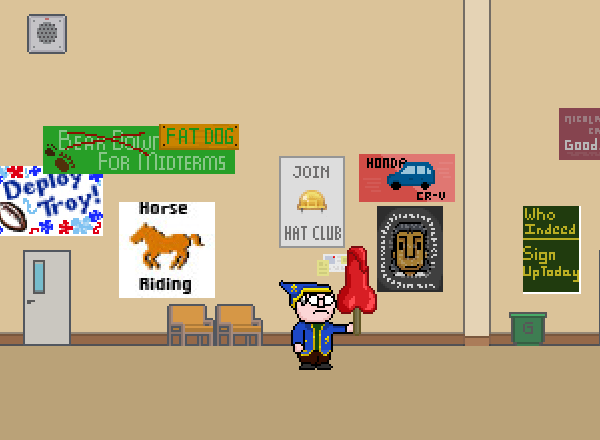 I’m the Cookie Crisp Wizard! That’s a Popsicle, and not the Saint’s Row inspired weapon you obviously think it is.

The game has a lot of different costumes that you can wear, both costumes from the TV show that the main cast wears, and other playable characters like Ben Chang and the Dean. The levels are also full of sight gags from the show. Some areas are more visually interesting than others, admittedly. A lot of the platforming bits are perfunctory, really, but short enough, basically a barrier between you and more jokes.

You’ve probably already guessed from my above description of the Mexico level (where the village is called Taco Town) that this game is racist. You would be correct. It’s also homophobic and bigoted in general! 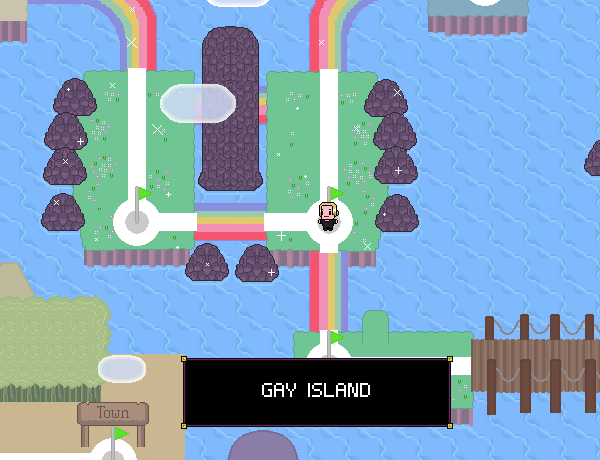 Yeah, you can go there. If you click for big you can also see the wheelchair boat that I had to crop out.

I’ll try to address this with nuance. I don’t know how successful I’ll be.

The actual cast of playable characters in the Hawkthorne game is as diverse as the cast of Community, which is to say, more diverse than video game playable characters are on average. In the show that this game is based on, the reason behind the bigoted level content is that the game was made by a bigoted designer. It’s a parody of racism. No one is good enough to pass under the watchful eye of the game’s final boss, Cornelius: even the white-skinned characters are the wrong kind of white.

Sometimes, in a film or TV show, the line between commenting on something, and indulging in that thing, is blurred. This summer’s big blockbuster Jurassic World is a good example of this. The film wants to tell us that a park full of living dinosaurs would be dangerous, an unacceptable attack on the natural order. On the other hand, it can’t help showing us just how much a park full of dinosaurs would also be awesome.

Video games have this challenge like no other medium, and it’s something I think we’re still sorting out. Witness the amount of games that comment on violence by being violent, or comment on objectification of women by objectifying women. In a television show, it’s enough to have a sight gag that there’s a level in this game called “The Black Caverns” full of enemies called “Jive Turkeys.” In an actual game based on that television show, someone has to really program a combat with the Jive Turkeys. It’s easy to be knee-jerk about this showing up in this format because you can’t just make that joke offhand; you have to really commit to it. Hawkthorne does this unflinchingly. If that’s likely to upset you deeply, consider this a warning.

Overall it’s pretty incredible that this game exists. It’s more incredible that it exists with so many strange features and so few compromises. Because it wasn’t originally conceived as a real video game, but more like someone’s fever dream of a video game, it’s not exactly like anything else I’ve ever played. If you want to give it a spin, the newest version is downloadable on the Reddit community. There’s also an official web site to check out some of the graphics and soundtrack.