A completely rhetorical question. The answer is obviously “no.”

But Square Enix spent a lot of energy last week trying to convince people that Lightning Returns: Final Fantasy XIII, was a game that they wanted. Many game journalists were invited to attend a press conference to this effect. There, they asked questions like “Why exactly is Lightning returning?” and “No, seriously, is that the real reason why?”

I was not at any of these press conferences. I do get press releases from Square Enix, where I have been getting information for a few months now about an “epic return to Lightning’s saga.” This generally passed me by, because it was not a saga I was personally invested in. However, I can offer some insight anyway.

I’m a Game Developer, and I subscribe to Game Developer Magazine. The postmortem for Final Fantasy XIII was printed there, over two years ago. Many gaming web sites repeated only the Gamasutra takeaway that the game “lacked a shared vision.” But reading the entire article is worthwhile.

I have to give Square credit for being candid about the game when many JRPG developers would stay mum. The postmortem is overall pretty negative. The introductory paragraphs of the article, before any point-by-point analysis begins, say in part: “It seems standard to start a postmortem with the things that went right. However, in this postmortem, we’ll be taking a look at the project in the chronological order of events, which necessitates starting with what went wrong.” That’s not a great sign.

Per this article, Final Fantasy XIII Fabula Nova Crystallis was, from the beginning, designed to be a series of games in a shared world. That’s the reason in the first place for the highfalutin subtitle. In some sense, there was always going to be a Final Fantasy XIII-3 (we have always been at war with Eurasia). It’s also important to understand, when Square talks about a “lack of a shared vision,” they aren’t talking about graphics. The visual style of Fabula Nova Crystallis was pretty well nailed-down from the start, from concept art and video trailers. The problem was they had no idea what the game was going to be, only what it was going to look like.

And so, the art pipeline began in earnest, before anyone really knew what the engine specs were, or even what the game was. This paragraph is telling:

“In the past, we had always created graphical assets that were presentable from all angles, so that they could be adapted for any situation. During development, there was an unspoken rule to craft everything in full detail. … As a result, some team members would exhaust their energy crafting a fully detailed asset that would only appear for a split second in the actual game.”

Emphasize “an unspoken rule.” The postmortem also directly cites a lack of team communication being responsible for a lot of wasted work on behalf of game developers and artists.

The bottom line: The FFXIII team had extra art. They had a lot of extra art, art that either wasn’t being used to its full effect in FFXIII once the full vision was finally realized, or, art that wasn’t being used at all. They had enough art to make another entire game… so they ended up doing that. And then again.

Art is expensive. It takes up a lot of time and energy and those things cost money. Even for art assets that haven’t been created yet, it’s easier for a team to work around an already-decided style, re-using small components where needed, than to create an entirely different art style and direction.

So, when Sophie Prell at the PA Report says “It’s also easy to be skeptical and to see this game as a way to re-use art, assets, and code to keep costs down while trying to milk the Final Fantasy brand,” I guess you can call me one of those people making that easy deduction. Do I believe the quote from Joystiq, where “Toriyama says that Square Enix heard from fans who wondered when Lightning would be back in a starring role.” Sure. Of course fans said something. Fans are CRAY. There’s always a fan of something who will say just about anything in its favor. But I doubt these fans are really the driving force in this instance. 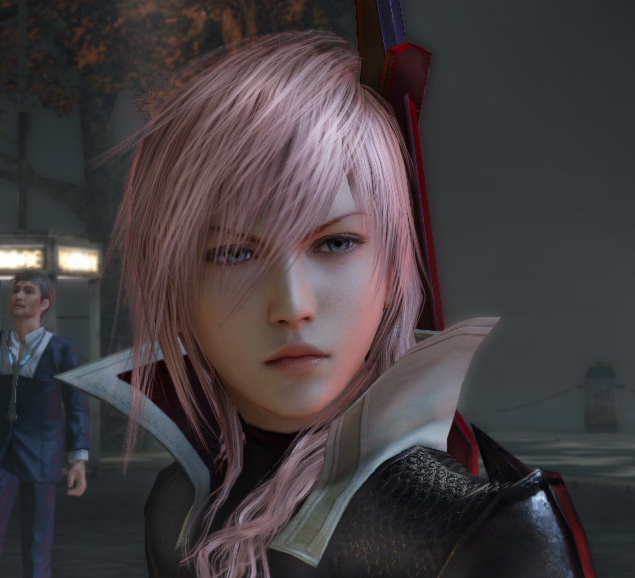 Even Lightning doesn’t buy it.

If SquareEnix really was “listening to the fans,” they’d be remaking Final Fantasy VII. This is where some might break down and explain all the reasons they should; I will instead tell you why they should not and have rightly refused to: because, again, art is expensive, ya’ll. FFVII has a tremendous amount of content that probably would not be doable at today’s extravagant production prices. So as much as I’m cynical about the reasons for creating Lightning Returns, I do not blame SquareEnix for trying to make a single brand out of Fabula Nova Crystallis. I do not blame them for recycling assets and art style to maintain a high level of detail and quality. They thought this was what you wanted.

Here’s what I will blame them for: a little sexism. Just enough to be annoying. Lightning is the first female protagonist of an FF game, now, because Final Fantasy VI wasn’t really about the adventures of women. Lightning will be able to change outfits and “her style” a lot in the new game, because Square doesn’t seem confident it can make an RPG about a woman without making it about dress-ups time. I’m not really against dress-ups time, but they already made that game, Final Fantasy X-2, which also apparently does not exist or is explicitly not about the adventures of women. It feels like they want to be on record as saying “this is our first female lead character” so badly, that they’re willing to throw all their other female leads under the chocobus.

I don’t know about the rest of the world, but as a jaded once-obsessed Final Fantasy fan, no, this isn’t what I wanted. I’d rather have RPGs with simple graphics and a lot of heart than some slickly-produced high-resolution hyper-dramatic mess. I was enthusiastic about the nostalgia of Theatrhythm, but maybe nostalgia is all I have with Final Fantasy now. For the rest of you, there’s Lightning Returns.

21 Responses to Did Anyone Actually Need for Lightning to Return?

Has the World Gone Mad