Overall we have a pretty nice solar system.

I do have mixed feelings about the Sun—it has a habit of burning my tender flesh—but on the whole it’s a good little star, and it’s gathered up a fine assortment of planets. Mercury is maybe kind of a loser, but the others have enough personality to make up for it. Seriously, I’ve visited like a thousand solar systems in Elite Dangerous, and most aren’t worth the trip. Lots of grey rocks and dim, sullen gas giants. You almost never see a vibrant blue Neptune floating around out there.

Most of the Sun’s collection are pretty, but not at all hospitable to humans. That’s why everybody likes Mars so much. The other planets would kill you instantly if you tried to stroll around on them. Mars would kill you too, but you could last… I don’t know, two minutes? It’d be painful, but at least Mars makes a small effort to be friendly, like it’s saying “I’m not really designed for you, but I won’t be a massive dick about it.”

Mars is a thing right now. There are three Mars-focused game icons sitting on my desktop. I don’t think I’ve actually started Mars Horizon yet, and the intimidatingly complex tutorials of Surviving Mars scared me off. Surviving is hard. Maybe reshaping is more my speed. 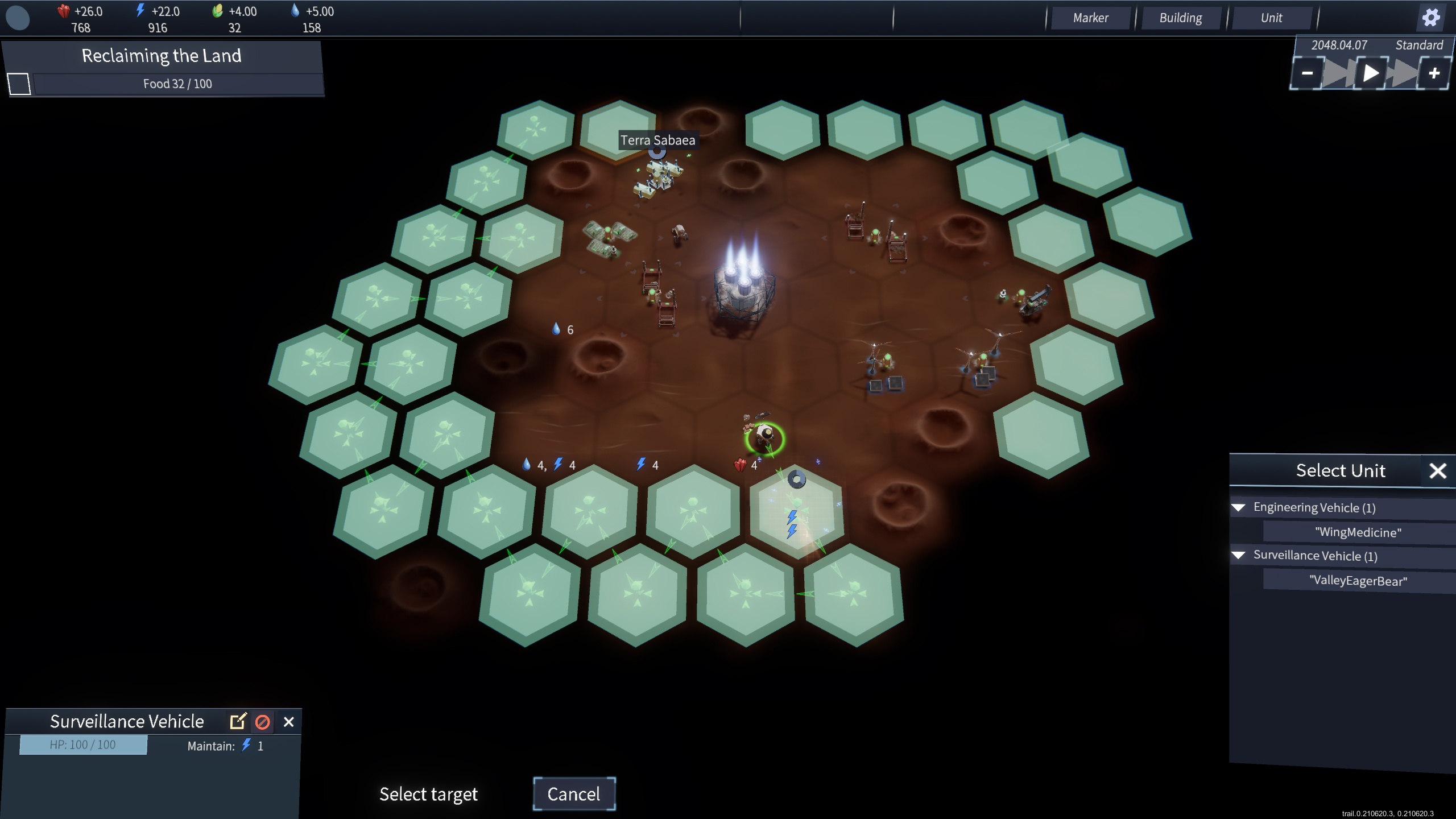 Off you go, survey-bot. Don’t come back without news of riches.

Reshaping Mars is a hex-based management sim that hides a reasonably deep experience under its modest production values. Having spent a couple hours with it, I’m reminded of why people enjoy city (colony) builders in the first place. It doesn’t pack in the same intricacy of its AAA counterparts, but Reshaping Mars has a lot to offer anybody who enjoys the type. While it seems to draw a fair bit of inspiration from Surviving Mars, this is a more easygoing sim, with a friendlier tone and less hardscrabble colonist’s-life misery.

Land a couple of drones on the planet. One surveys the area while the other builds early structures to mine minerals for production, extract water for drinking and future farms, and gather power. Once you’re set up to your satisfaction, it’s time to throw down habitat domes and open the floodgates. Some colonists have been waiting patiently up in orbit while you get the place ready. As soon as their boots are on the ground you can put them to work, as your little colony’s needs grow exponentially with the population.

The first 45 minutes are pretty hand-to-mouth, so the occasional care packages from Earth are welcome. The more housing you build, the more immigrants will turn up. But you don’t want to grow too fast in the early days, when food, water, and power are painfully thin on the ground. Your colonists weren’t expecting the Mars Hilton, but they do have higher standards than your faithful survey and engineering robots. People want consumer goods in exchange for work, and the colony’s logistical and administrative needs grow with the swell of humanity. It’d be so much easier to automate the whole thing, do away with people and their needs altogether and build a colony of obedient, uncomplaining drones on Mars. And you can, actually, supplement human labor with drones, but the machines are expensive up front and less efficient in the long run. 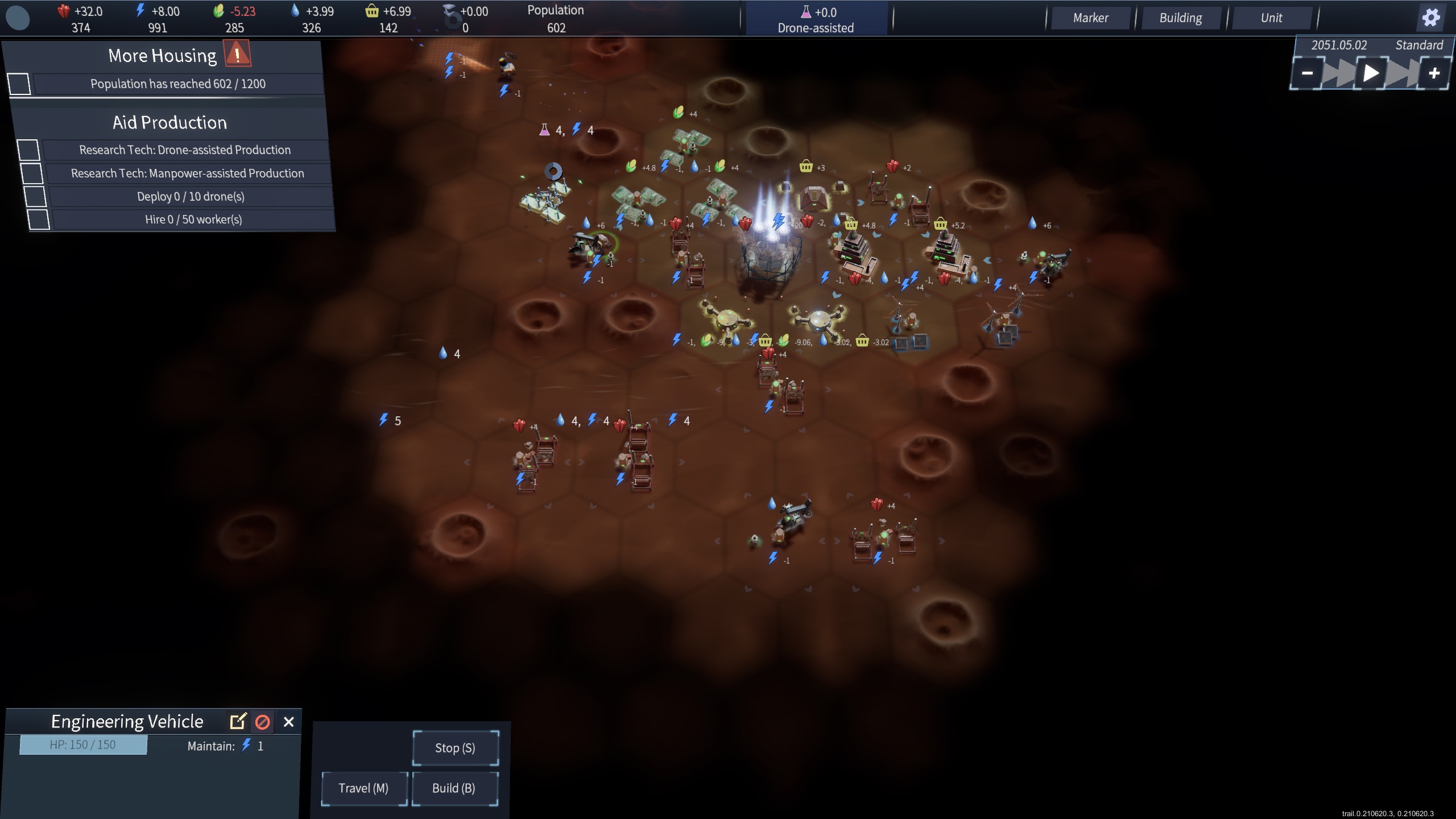 More production is one way to grow your resource stockpile, but maybe not the best. I found that investment in drones and human workers at existing facilities paid off in the long run.

Mo’ people mo’ problems. You’ll rarely get a minute to reflect without at least one alert warning you about a pressure suit leak, a broken bone, repulsive food, and a rainbow of other human gripes. In keeping with the tolerant feel of Reshaping Mars, the issues you encounter in the first few years are minor and easily dealt with. Which is good, because keeping the colony’s head above water is a full-time job in those early days. Then, just as you begin to see the various resources tick into surplus and take a moment to breathe, Reshaping Mars starts throwing the real curveballs.

Usually management sims of this nature build stories through random events: you’re minding your own business in RimWorld and suddenly a herd of man-eating chinchillas invades, or someone goes on a food binge, or a solar flare wrecks your power infrastructure. Such events do happen in Reshaping Mars (too frequently, in fact, and the same incidents occur too often). But this game adds another wrinkle in the form of scripted story events. Just as you’re beginning to get comfortable, Earth’s economy collapses and nations back home dissolve into war. Supply shipments vanish first. Immigration slows to a trickle before stopping altogether just when you need warm bodies the most. Then the governments of Earth start to wonder what you’ve done for them lately (nothing. I’m on Mars. What were you expecting me to do, dill-hole? Is moving to Mars not enough?)

Next thing you know, Earth has severed ties and you’re on your own… sort of. The end of diplomatic relations doesn’t mean Earth has left the building. I’ll be coy so as not to spoil it, but things go from bad to worse in short order. The philosophy behind Reshaping Mars goes beyond “build a colony.” In fact, I get the feeling that at some point humanity may turn to Mars to save the Earth, at which point players will face a tough decision indeed. 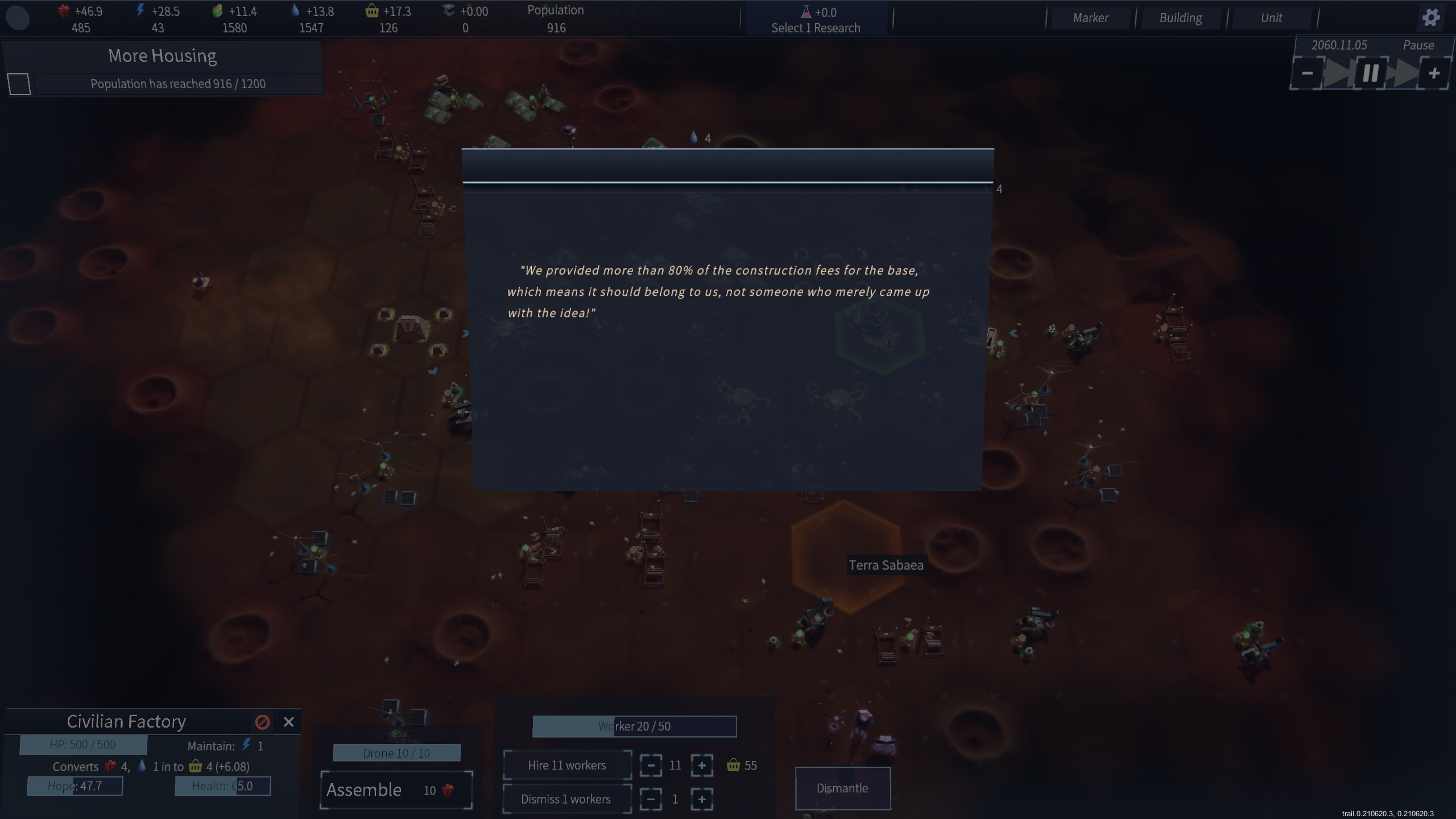 Luckily we’re here and you’re there. Come get us if you want (they do)

Though Reshaping Mars is simpler in presentation and mechanics than the top-shelf AAA sims, this isn’t a shallow game. There’s a big civics tree and a bigger research tree to chart your little society’s development. As you develop, planning becomes increasingly critical, with specialized districts and layered needs requiring careful attention and foresight.

Throughout this Reshaping Mars does a good—not great, but good—job with the pacing. It’s a slow enough burn that you’ll get the hang of each thing before the next comes along, but in time you’ll find yourself wishing the game was a bit quicker on the draw introducing new concepts. And while Reshaping Mars makes a real effort to teach you how to play, certain elements go unexplained in the demo, necessitating some guesswork. 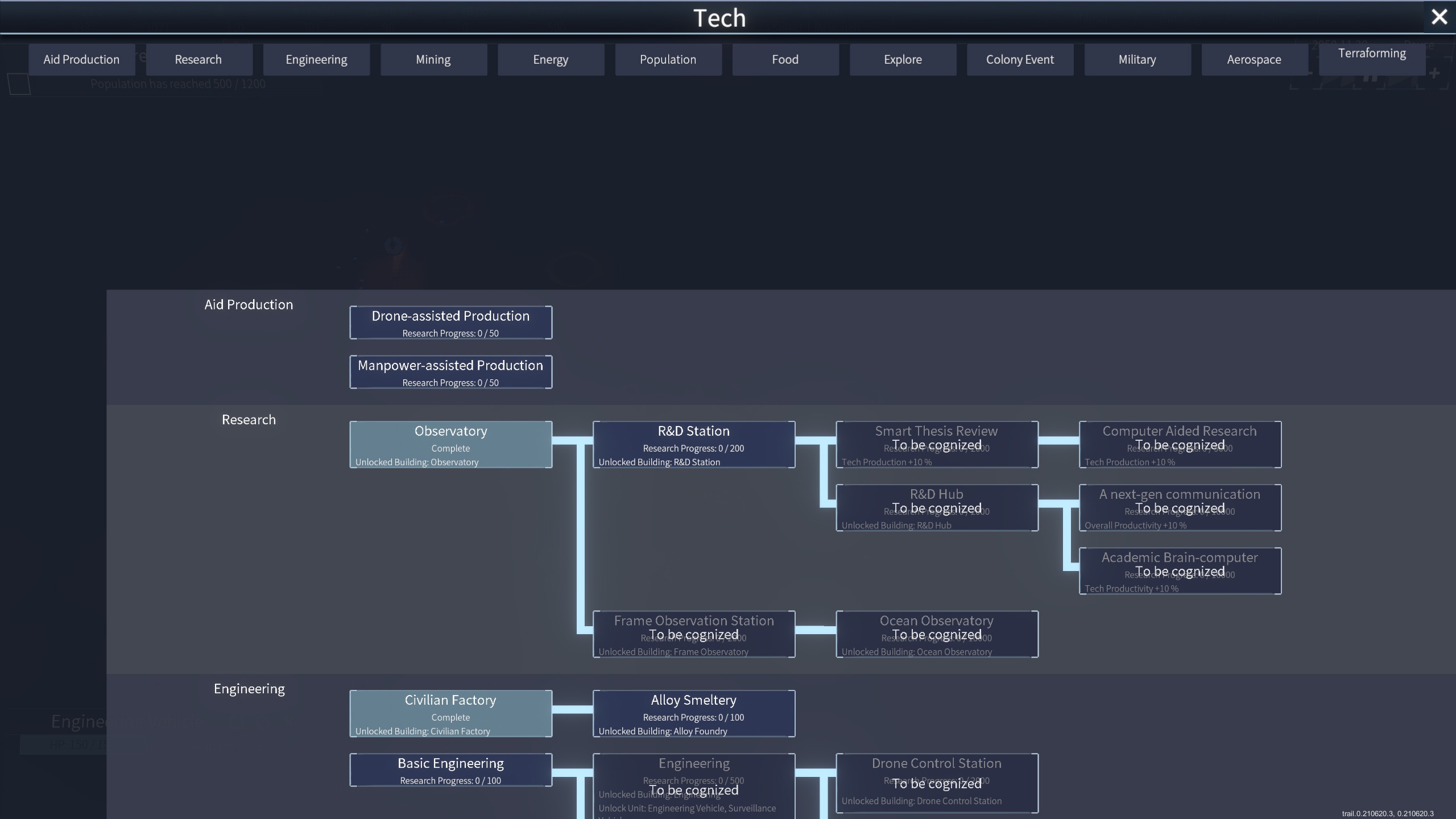 The extensive research and civics paths suggest Reshaping Mars has quite a bit to offer.

As you can see from the screenshots, this is a relatively simple game in some ways. One structure per hex, with adjacency bonuses and unique features dictating where and how you place your increasingly complex districts. There’s a lot to Reshaping Mars that I didn’t get to in my two-ish hours with the demo. In fact, broadly speaking I wasn’t too far from the starting point in terms of technological development and colony growth; and certainly nowhere near the planetary terraforming and space development shown in gameplay videos.

If you demand the most lavish graphics, most splendid variety, and most detailed simulation… look elsewhere. If you’re okay with a step down from super high-gloss, you should find that Reshaping Mars pushes most of the right buttons. In fact, I had to berate myself savagely in order to shut the game down, because Next Fest ends today and it occurred to me that all my demos might deactivate before I have a chance to play them. With six days of demo yet to go and a bunch of the ones I’ve already played being unsuitable due to crashes or awfulness, I can’t allow myself to get too scrunched up in one game. Mars will have to wait.

Reshaping Mars is developed by Tholus Games and published by Yooreka Studio. It’s currently in Early Access, slated to release on July 29.