Well folks, the bad news is we’re going to have to change the title of this project to “Steerpike’s Demo Decathalon” since I’ve kind of run out of demos that work (well enough to count). In a way it’s for the best, though, because just as I didn’t really plan out the games I’d play, I also didn’t put much planning into the order I played them. As it happens, the last two we’ll look at are actually interesting, so at least we’ll end on a high note. If I stuck with twelve then it’d be more of a whimper than a bang. We want bangs, not whimpers.

How did I not hear about this game before Steam grabbed my hair and announced that it’s “similar to games you’ve played?” I don’t know. It is similar to games I’ve played (XCOM, Phoenix Point, Gloomhaven) and it’s a game that has some buzz attached to it as well: Project Haven is a deserving Epic MegaGrant recipient, and gathered a bit of limelight even in its alpha state. And well it should because this game has a lot of promise. 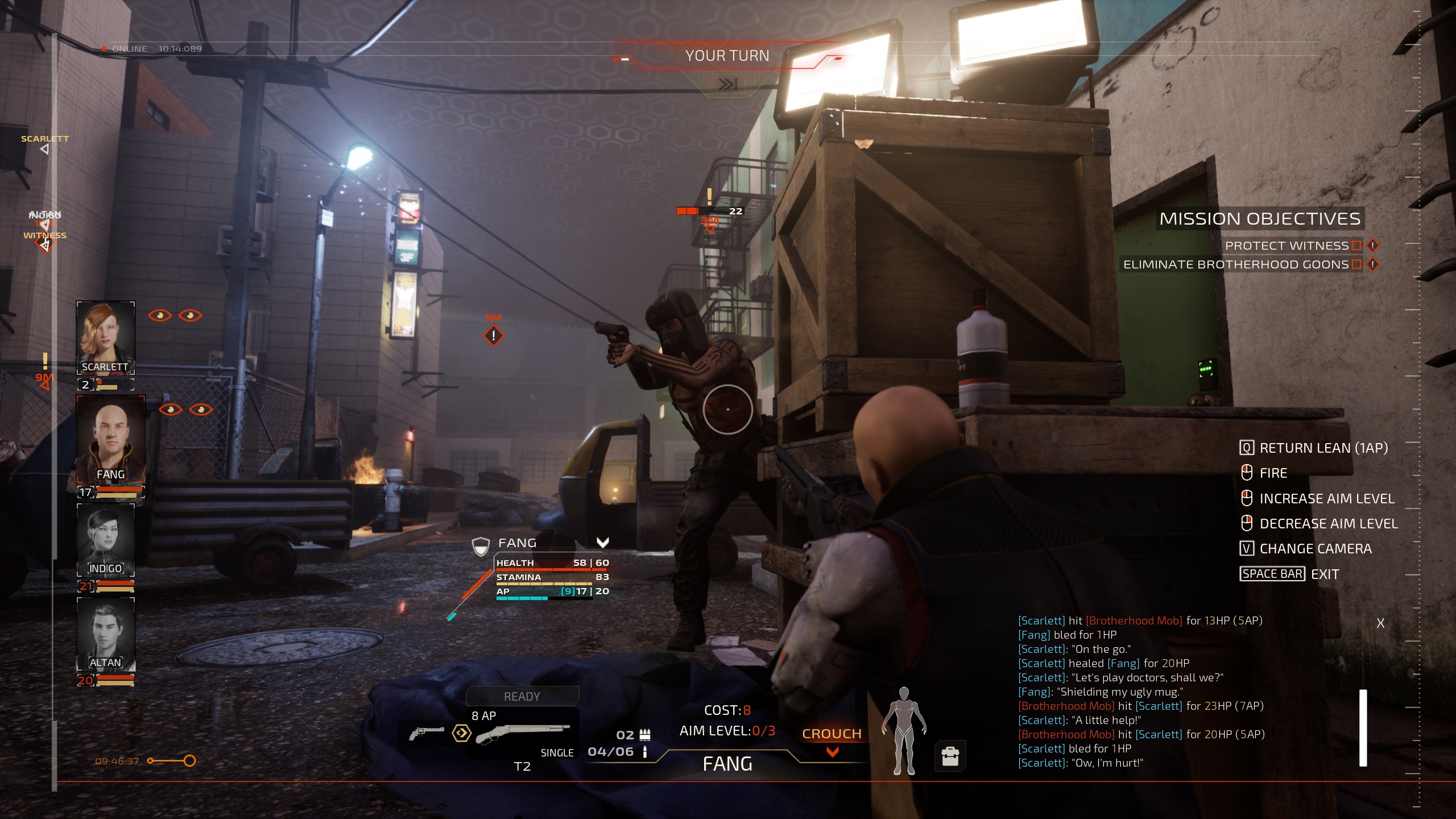 A small-squad tactical management sim along the lines of… well, games similar to ones I’ve played, Project Haven (not to be confused with Gloomhaven, they’re similar games but altogether different havens; one is a project and one is a gloom, do not mix them up or you will be confused) is a slick and stylish mix of good elements from many forebears. Set in a near-future urban wasteland, you take control of the Steel Dragons, which is a dumb name for a rather dumb group of mercenaries trying to make a less-dumb name for themselves in the high-stakes world of killing strangers for money.

I needed to open with the positive because now I’m going to mock Project Haven for several paragraphs in succession.

The merc team should change its name to “Steal Draggyynns” for an edgier feel. Indeed, if I have one complaint about Project Haven, it’s that this game tries so hard to be edgy that its dialogue veers into territory better occupied by a heavy metal band conceived by a nine year old grounded by his parents for swearing. In among the usual epilepsy disclaimers, Project Haven even daintily warns you that it uses swears because it’s gritty and adult, but you can turn them down or off in case you’re Mister Rogers and potty language upsets you. 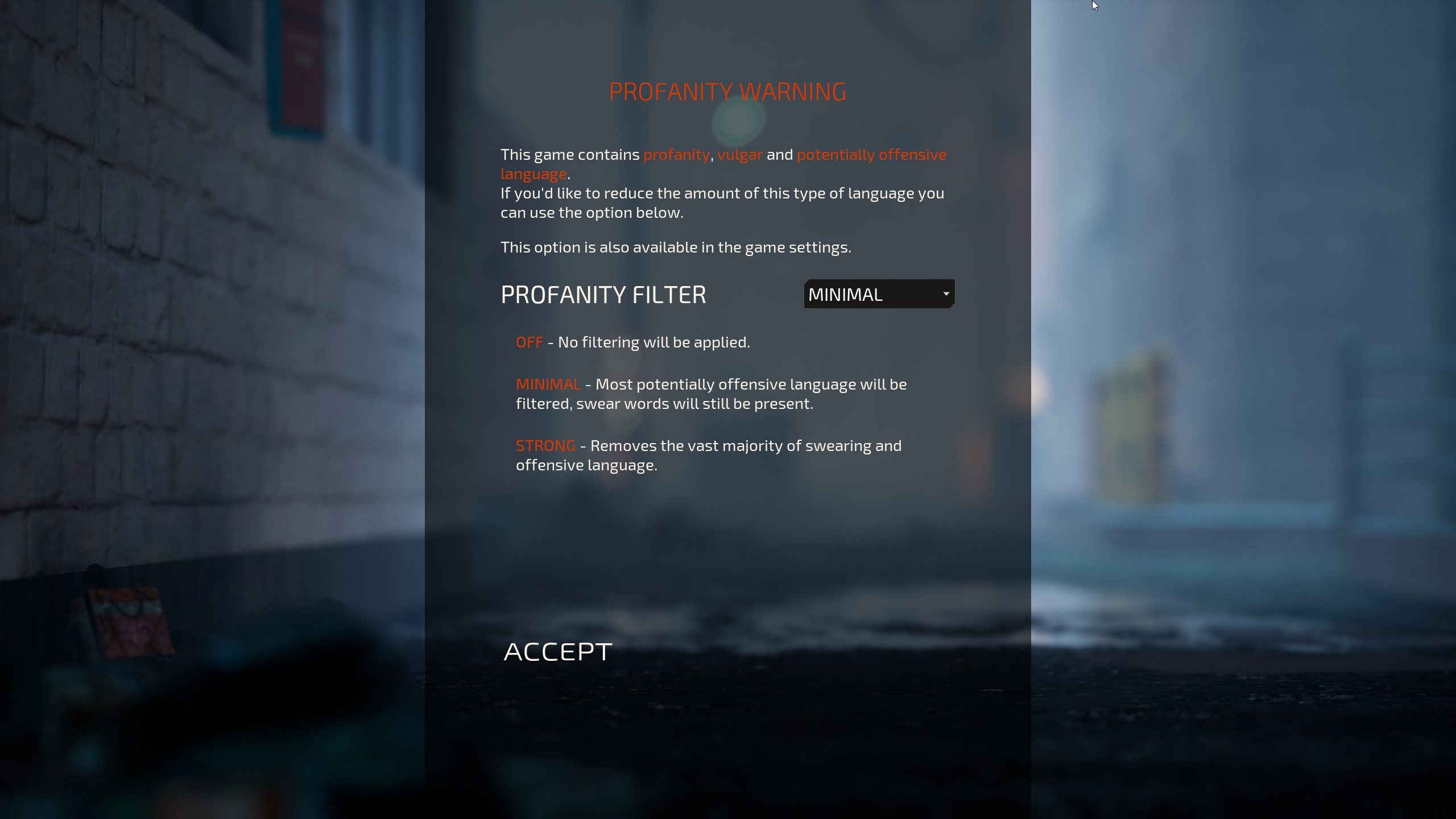 As you all know I am very easily offended and consider profanity to be a crime against god; but in the interest of journalistic integrity I left the poop-talk on. How else would I know what Project Haven wanted to be?

Project Haven wants to be edgy, man. Like, dick edgy. No, like… tits edgy. NO, like… BALLS edgy. With all respect to Tim Langdell, former owner of the word “edge,” Project Haven is all edge. It edges out other edges. WITH ITS DICK. And then it strokes dicks and talks shit and tits and fuck balls shit crap. Dang. Squad members don’t “run out” of bullets, they blow wads and empty sacks. They don’t take cover, they hide their ugly fucking mugs! Because srsly, damn. Also, crap. Do they reload? Tits cock no, they stroke their rods. Why say “sadness, I have been shot” when you could say “I’m pissin’ blood here!”

Then of course some of them say things like “I prefer not to get shot.” Which is a little out of the blue but fucking makes sense. Who the bitch wants their ass fucked, am I fucking right? You’d piss blood. What the fuck. Rectum. 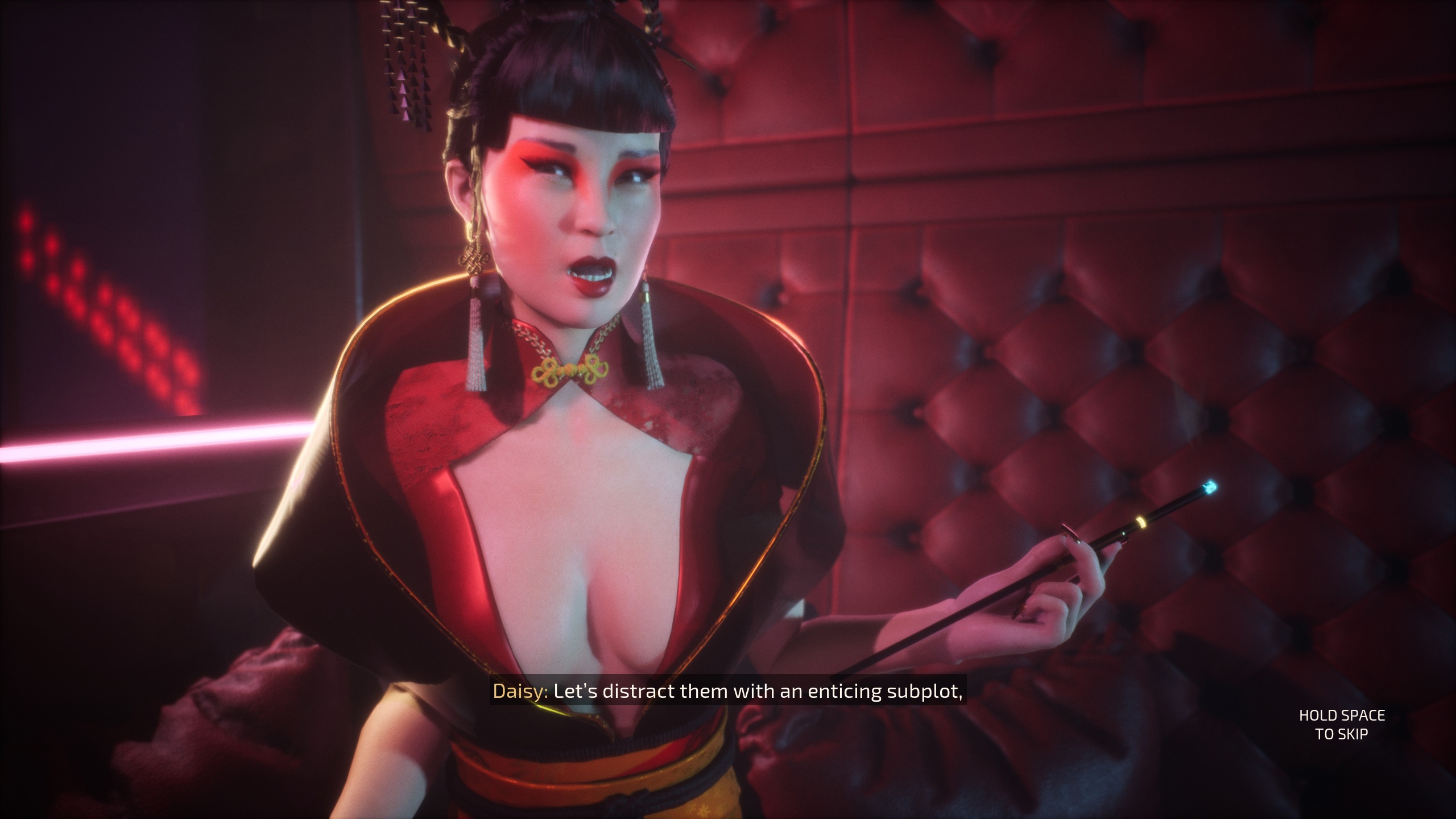 Believe it or not, this character isn’t talking about her boobs.

What was intentionally hilarious in Bulletstorm is unintentionally hilarious in Project Haven (I should try it with the swear-jar on, because I’m genuinely curious what the dialogue would be like). Now, in fairness, I don’t hang out with mercenaries so maybe they do talk this way. More likely, though, some misguided fucking soul thought that the best way to make Project Fucking Haven gritty was to fucking language that shit up, right in its fucking ass. 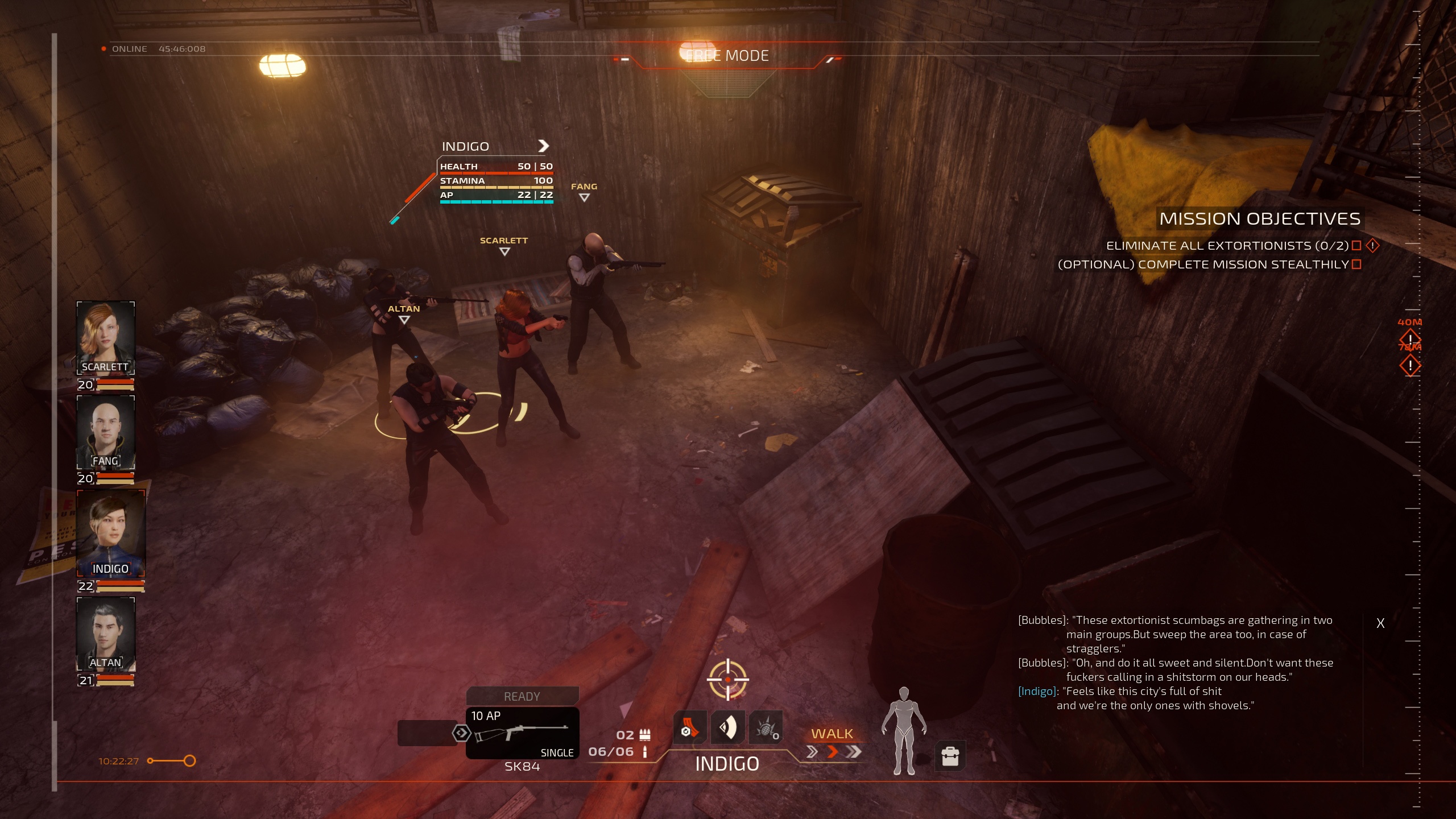 Try not to fuck this up, you fucking fucks, or we’re fucked.

Almost everything else about Project Haven is great, from the elegant controls and tutorial to the clever, detailed feedback system that pops up between missions, inviting granular input on the experience. Project Haven isn’t even in Early Access, but it should be, because tons of Early Access games could learn a bundle about how to solicit input from players.

It’s instantly familiar if you’ve played a tactical combat games before: turn-based, each character armed with a pool of action points to spend and an array of context-sensitive options for dealing with particular circumstances. Taking a cue from Phoenix Point, it gives you direct control when you discharge your weapon, which gives combat a more hands-on texture. Rather than pushing “shoot” and waiting for the results of an invisible die roll, you aim and shoot with your own hands. It’s still an invisible die roll, but you feel more involved, especially since the game makes good use of 3D space and conveys a mountain of tactical information like line of sight without cluttering up the interface.

Based on the demo missions, most of the tactical experience is already in place and superbly designed. It also seems like the developer devoted massive resources to its custom environments. Compared to the fairly generic puzzle-piece sets of Phoenix Point, where each location ultimately pulls from the same basic assets, the dim alleys and grubby interiors of Haven City have a handcrafted feel you can’t help but appreciate. The streets and architecture feel organic, like a place that’s been built up over time rather than snapped together in a predictable pattern. 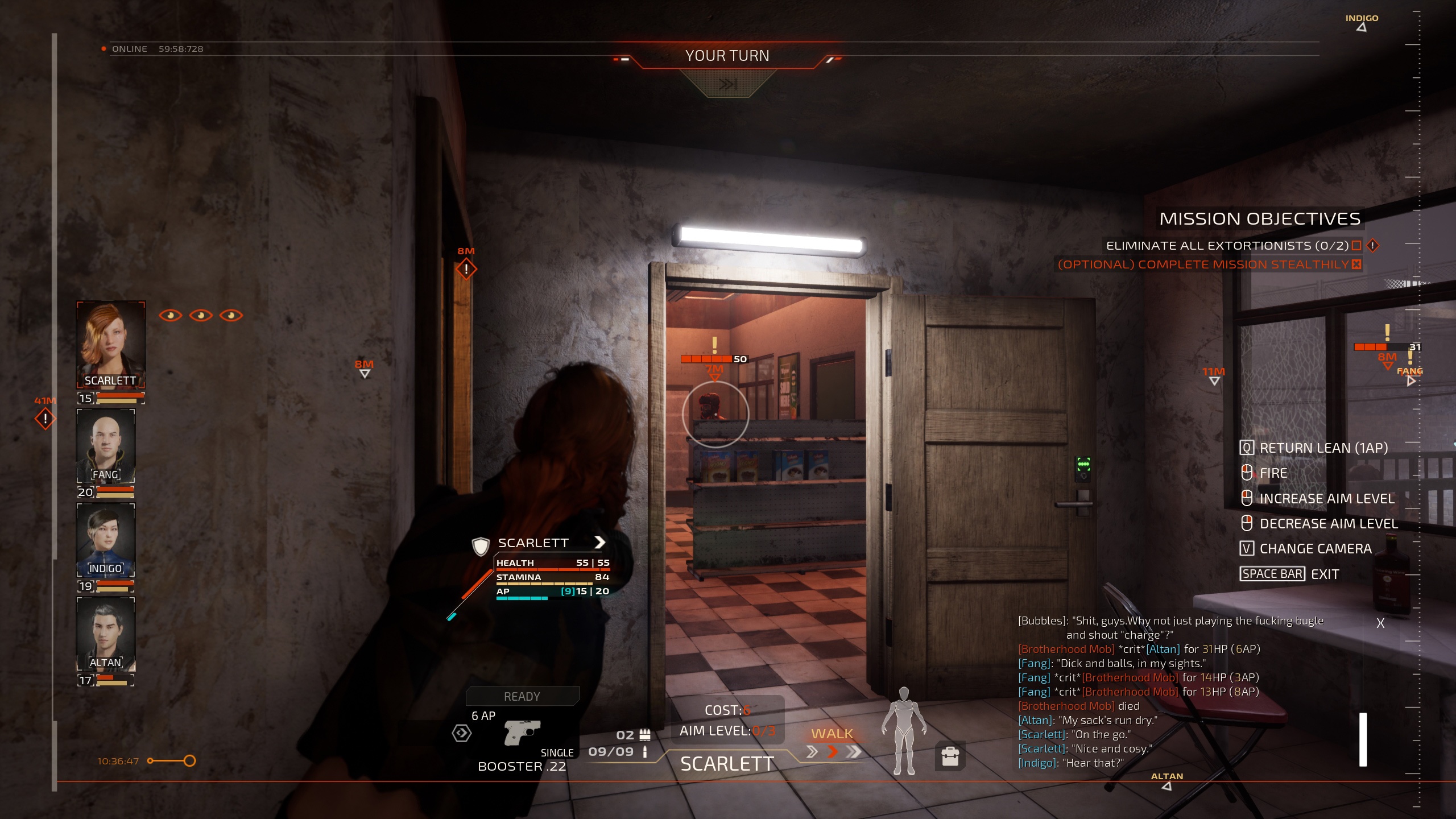 At this stage of development, it’s no surprise to find plenty of issues related to the custom setpieces. Project Haven makes no secret of the fact that it’s still in alpha, so I’m not too fussed when enemy turns take a long time to process, or the camera is occluded by structures, or the game shows me the second floor of a building even though my team is on the third. These idiosyncrasies are plentiful in the demo, sometimes to the point of interfering with gameplay, but I’m sure most will be buffed away before the final release. Play a game in alpha, you can’t complain about alpha problems. Project Haven’s alpha gives a very clear picture in broad strokes, and despite the issues it’s entirely playable.

Another interesting twist to Project Haven is that the campaign will evidently be playable in co-op. Tactical squad combat and cooperative play may seem like strange bedfellows at first blush, but thanks to Gloomhaven, we know for a fact that it can work beautifully if implemented well. Gloomhaven is based on a board game, and transplants the mechanics full-cloth; Project Haven isn’t, and it’s impossible to say at present how the multiplayer will work—though my guess is it’ll be similar to Gloomhaven overall, with each human player controlling a single squad member, with shared resources for equipment purchases and so on back at base. 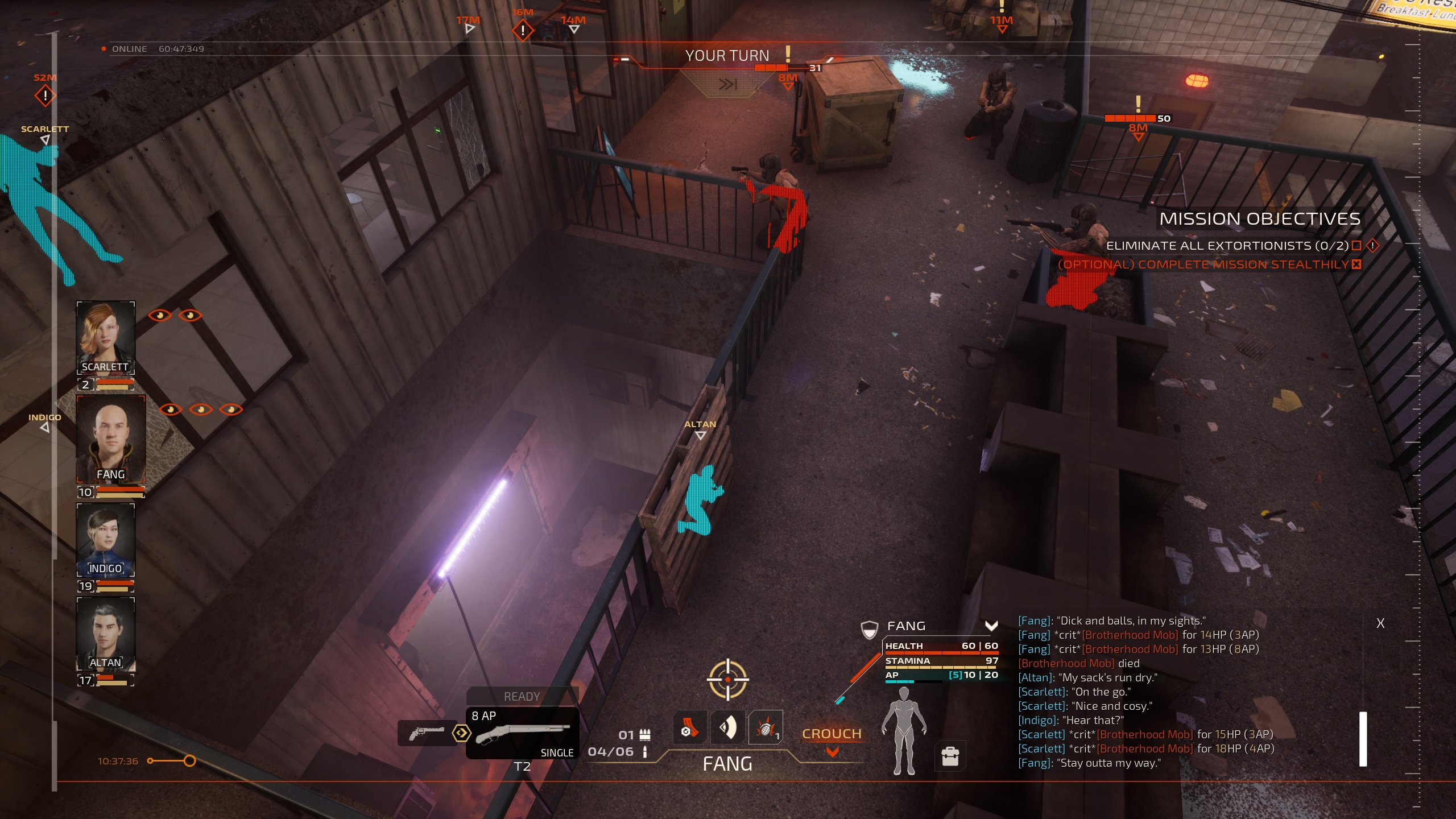 Seriously, it’s worth it to zoom in on these shots just to check out the dialogue scroll in the lower right.

Speaking personally, I find I have less patience for turn-based squad tactics games than I used to, probably because I don’t often play a game for hours at a sitting like I once did, and turn-based games tend to plod a little at times. So it says something about Project Haven that I enjoyed it so thoroughly even though it cleaves to that model. XCOM and Phoenix Point are the obvious contemporary comparisons, but at the end of the day it looks to me like Project Haven will mostly take after Jagged Alliance—the 1990s version, not the new-ish reboot—with its focus on personalities rather than generic cannon fodder soldiers.

That might wind up hurting Project Haven in the long run, because it comes off as so fucking childish with how fucking gritty it fucking is; it tries so fucking hard to be fucking hardcore and fails so fucking badly in that one facet of its fucking design that it could become a rather significant distraction. It’s probably too late for a course change; besides, I get the sense that the developer is entirely oblivious to the game’s shortcomings on that front. Will it ruin the experience? Probably not. Project Haven is really impressive where it counts, and with any luck you’ll be able to just tune out the annoying wrapper. There’s certainly reason to hope.

Project Haven is developed and published by Code Three Fifty One. It’s currently in alpha, set for release in 2022.

Email the author of this fucking post at Steerpike@Tap-Repeatedly.com.

One Response to Dozen Days of Demo #9: Project Haven