Dozen Days of Demo #8: My Time at Sandrock

I avoided Stardew Valley for years because I knew perfectly well that it would swallow hours of my life with its mix of time management and socio-career simulation. Eventually I gave in and found it just as charming as I’d feared. Oddly, I didn’t fall nearly as deep into the Stardew Valley black hole as I could have, which I put down to the fact that I played in co-op with my friends Eric and McShane, and while E and I slaved away under the burning sun every day to keep I Say Mechro Farms profitable, McShane tapped every girl in town.

I don’t hold it against him (much). He insists that “someone” has to take charge of Stardew Valley’s social element, and he’s not wrong. He also insists he was “just being friendly,” and I suppose that’s not wrong either, but he was very friendly indeed. With the entire town. E and I had our hands full keeping the crops alive and selling artisanal mayonnaise (McShane leveraged mayonnaise in an altogether different and less artisanal way); by nightfall we were too tired to be friendly. I can only imagine how tough it would be to keep all the necessary plates spinning when you’re just one person. The social element of Stardew Valley may be super-charming, but it’s the first thing to go when you’re trying to actually succeed in the game. In single player, it seems like it’d be almost impossible to find love while building a successful farm.

McShane’s crimes aside it’s no surprise, given Stardew Valley’s runaway success, that others would try to emulate it. If there is a surefire formula that always results in a game like Stardew Valley, then it hasn’t been found, as many half-assed copycats have learned in their “homages” to it. My Time at Sandrock is definitely an “homage” to Stardew, but it’s not a half-assed copy. And it deserves applause for quality and production values.

Pathea Games has been around since it successfully Kickstarted its debut title Planet Explorers, which launched in 2016. I backed that game, and enjoyed the final product pretty well too, though the rough edges did finally put me off. Since then I hadn’t paid attention to what Pathea was up to. Turns out they’d seen an opportunity and decided to remodel the house that Stardew Valley built. 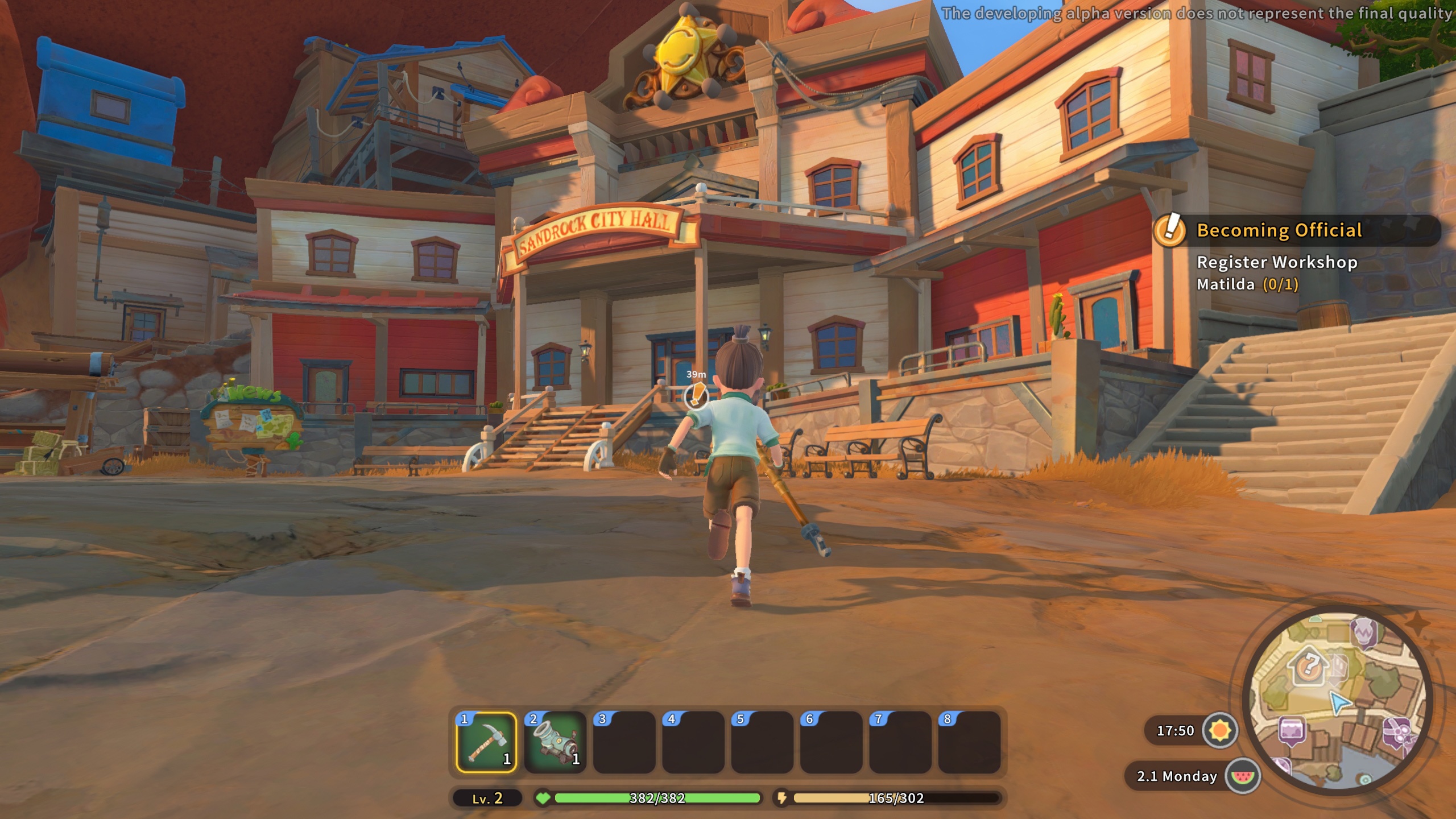 This isn’t their first attempt. 2019’s My Time at Portia is, by all accounts, a more direct Stardew Valley-like. I think it did okay; at least, it did well enough for the studio to stay in business, and now they’re back with My Time at Sandrock. It deviates slightly from the Stardew/Portia model in terms of focus, but it’s still the same bones.

Apparently there is farming, at some point, in My Time at Sandrock, though I didn’t get to it. The game is more about building stuff than growing things. That’s your job. “Builder.” A carpenter/plumber/electrician/general fix-it person who’s arrived in the titular village to take over for the Builder who’s retiring. Once you arrive and get your bearings, it’s up to you what to do and how, as with all such games.

I gather that both Sandrock and Pathea’s earlier My Time at Portia share a world and lore. Strangely for this type of game, that world is a post-apocalyptic far future Earth, but don’t expect too dystopian a setting; cuteness is still the name of the game. You take assorted commissions to build things for townsfolk, explore the ruins of old earth to find valuable artifacts, roam the desert battling wildlife, make friends with people in town, and so on. These games are about living a life, which means doing whatever the hell you want, provided you manage your time effectively.

My Time at Sandrock is slick and well-produced, and I could see myself losing hours to the final product. It also does promise multiplayer of some sort, though I didn’t check the preview out; hopefully we’ll see the same four-player campaign co-op that was introduced in Stardew Valley a couple years ago. As fun as these life-simulators are alone, they’re more fun when McShane is fucking everything that moves you get to play with your friends. Ironically, the life of a Builder is not one I’d seek out under any circumstances outside a video game (same for the life of a Farmer). But inside a game, even in single player, it can be hypnotic. 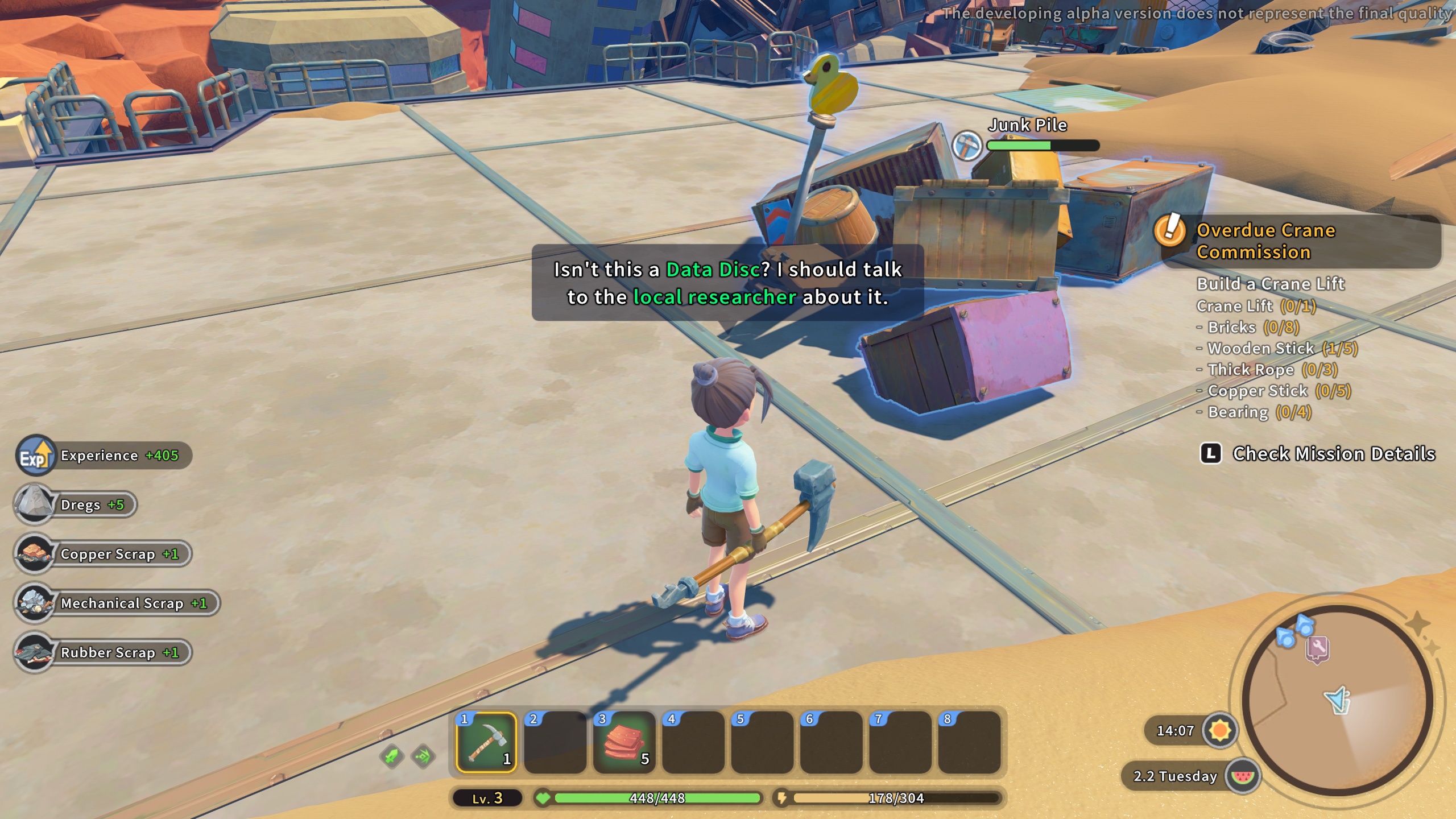 Sandrock’s cheery style and wry sense of humor serve it well. I suspect there will be moments of darkness—there usually are in this type of game—but if deployed well they’ll actually add to the lighthearted flavor. Right out of the gate the demo introduces you to a likably silly cast of characters living in a likably silly place. Sandrock is built on the ruins of an Old World city, and exploring it is clearly going to be a major part of the game, much like the mines and caverns of Stardew Valley. Indeed, the parallels between this game and its inspiration come fast and furious, but this is clearly a labor of love on Pathea’s part, not a callous money grab. They took things they liked from Stardew, and things they liked from other games, and made it their own. It’s fun and full of heart. I have high hopes for the final product.

The core challenge loop comes down to the fact that there’s more to do in any given day than there are hours to do it, but it’s more complex than just that. First off, you have to decide what you want to do in broad strokes: quests for townies? Exploration? Monster hunting? Are you more interested in becoming the best Builder you can be, or in finding that special someone? Do you care about the town and its history, its people, its secrets? If not, that’s fine. There’s still plenty of other activities to choose from. If you do care, that’s fine too; you can care to the exclusion of everything else and still get a lot out of the game. 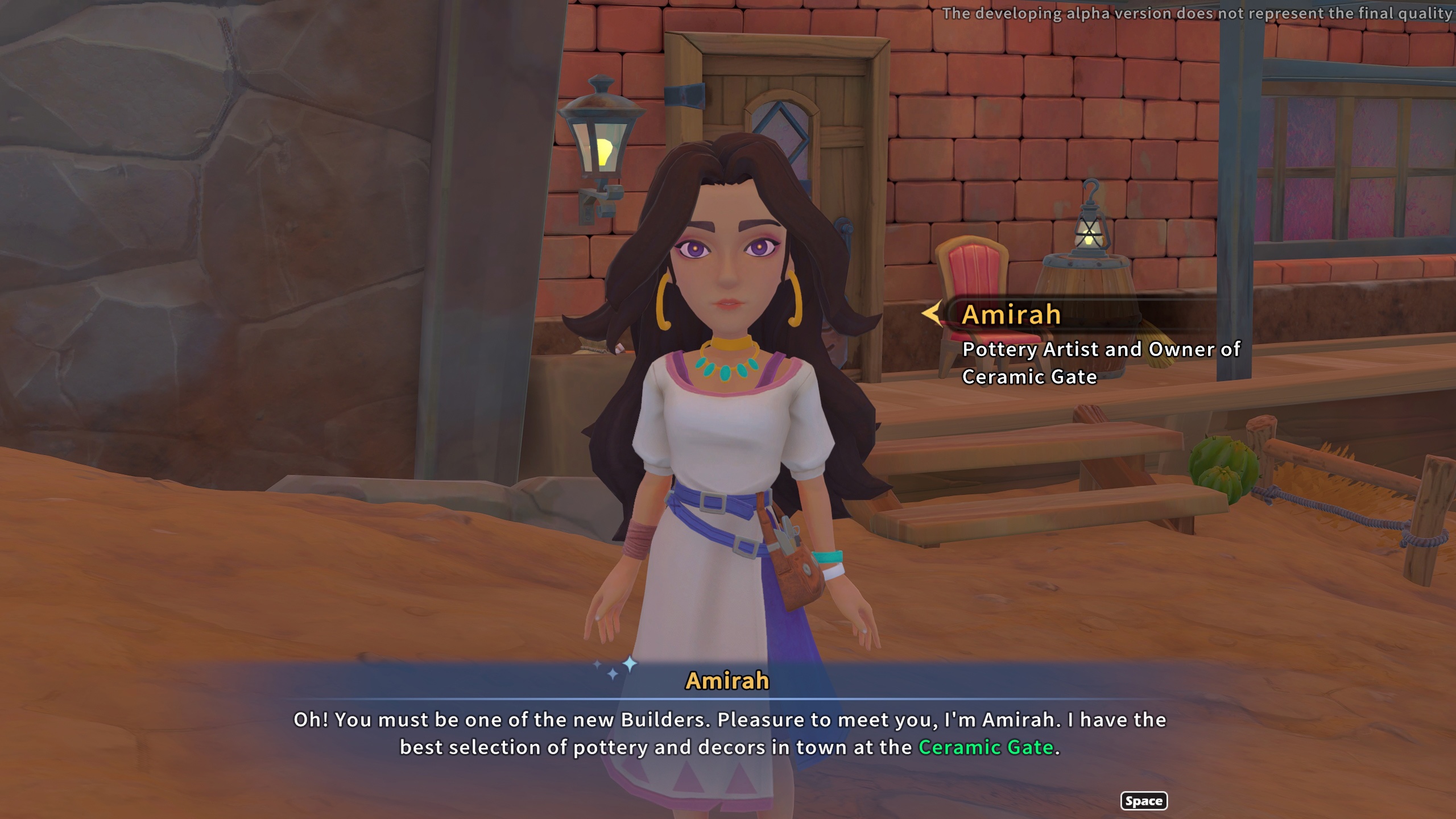 For the purposes of the demo, I went with a balanced approach, breaking my days roughly into thirds. Morning gathering resources, midday building, afternoon/evening getting to know my new neighbors, though not Biblically (wooing takes time and I’m on the clock here). The other townspeople have their own schedules, and part of the experience is therefore about using your time not just efficiently but intelligently: people work during the day (mostly) and sleep at night (mostly). They go shopping on weekends and out to eat in the evening. And as with its inspiration, My Time at Sandrock has a bustling calendar of holidays, birthdays, market days, and all the rest. It’s a small town.

Now, here My Time at Sandrock offers some welcome quality of life improvements, like a calendar you can call up any time, and the ability to set custom reminders. It doesn’t necessarily make it easier to juggle everything, but at least you won’t forget Enrique’s birthday or the Feast of the Sand Lobster or whatever. Just set a reminder. Set five if you want. 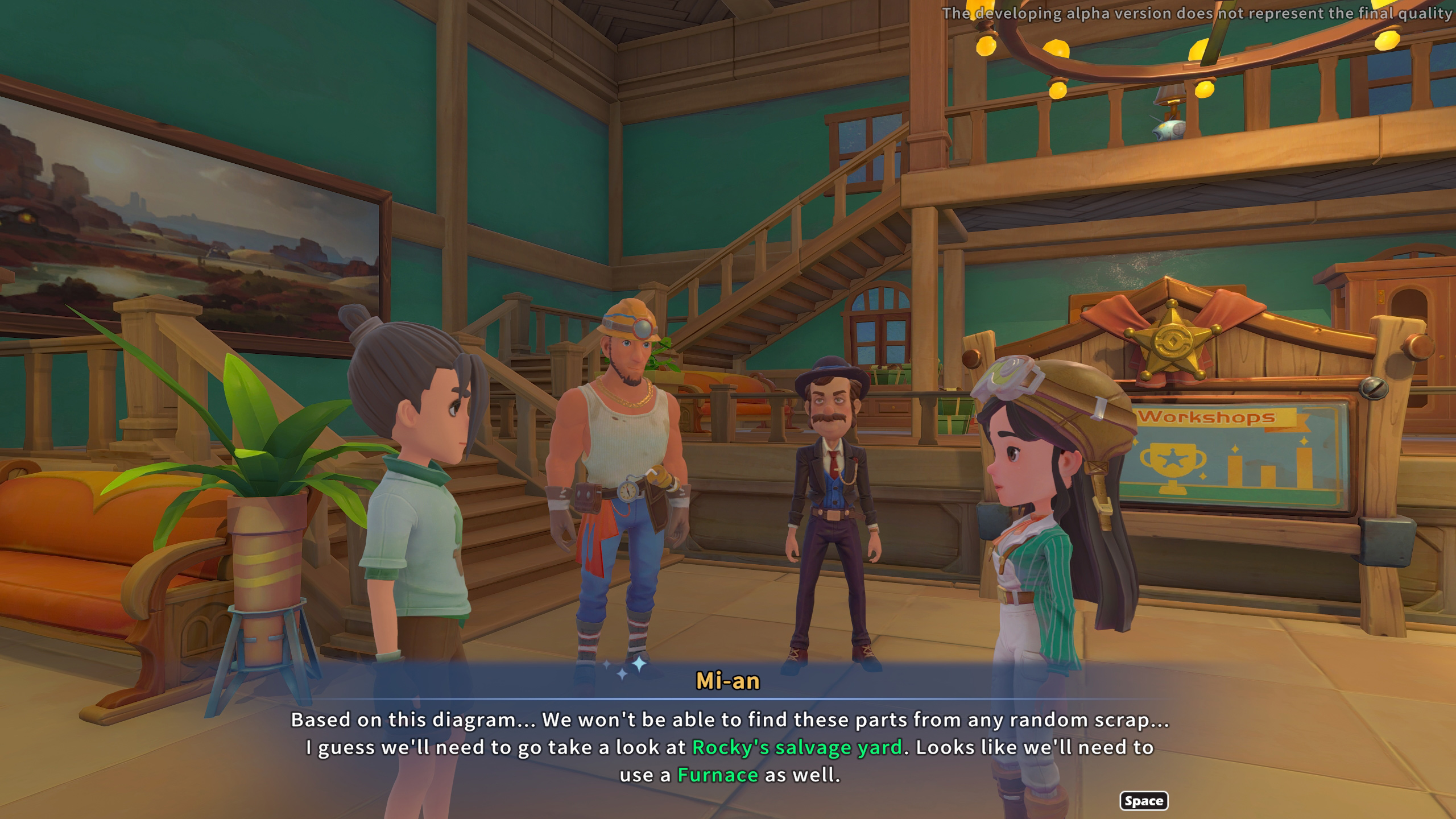 Since this game is in Early Access, I choose to believe that Pathea is still working on polish elements. The bane of these games is your character’s daily “energy,” which drains with all activities until you make it to bed or collapse from exhaustion. Stardew Valley in particular is infuriating for this mechanic; not only does watering your crops quickly take up half the day, but apparently wielding a watering can is so tiring that one can only hope to manage if one takes several naps, wasting still more time. I get why the mechanic exists, but it’s annoying as hell, and judging from the demo My Time at Sandrock promises to be no different. Here’s to hoping Pathea remembers that games are supposed to be fun, not obnoxious, and iterates this a bit.

A few other odds and ends stand out as needing more attention. Pathea Games has never been great with interfaces—the horrific inventory system is what finally put me off Planet Explorers—and though My Time at Sandrock isn’t the worst in the world, it could stand to be better. The basic loop of needing to process garbage into semi-useful resources also seems rather pointless, though I like other new elements such as the requirement that your machines be powered and cooled. 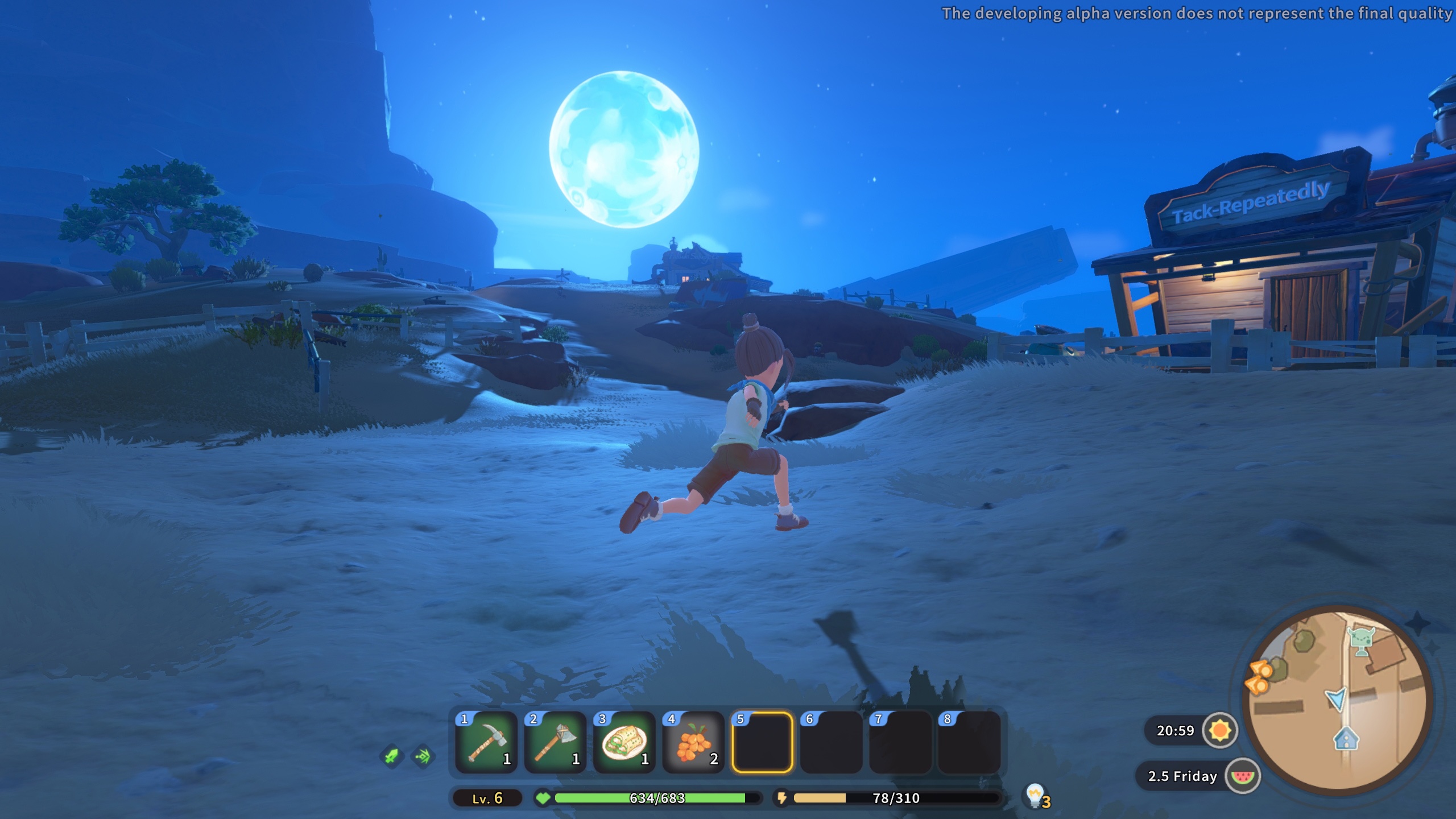 Indeed, I liked My Time at Sandrock overall. It’s too early to say with certainty, but it feels extremely promising. After two hours with the demo there was still a ton more to discover, and whole facets of play I hadn’t gotten around to exploring. It looks like there’s an actual story arc to this game, or at least major narrative beats that the player can choose to get involved with or ignore, and I’m curious to learn more about them. Games of this nature are ultimately sandboxes, but you want some structure to keep the whole thing from devolving into chaos. I’d say that My Time at Sandrock isn’t quite ready yet, but it’s getting awfully close, and it’ll be one to watch.

My Time at Sandrock is developed and published by Pathea Games. It is currently in Early Access, with a planned release sometime in 2021. Hurry and try it out before McShane has sex with it and doesn’t call it back.

One Response to Dozen Days of Demo #8: My Time at Sandrock