Anybody who knows me at all can’t be surprised to see this title listed. I’m a Chernobyl nerd, so obviously I was curious to see what we were dealing with here. This is tricky subject matter for a game, and it’s only fair to acknowledge that fact right up front. Games like STALKER are rooted in abstract fiction and use Chernobyl as a similarly abstract and fictional setpiece. A game that openly claims to simulate the Liquidiation, on the other hand, could be in rather poor taste given the fate of most Liquidators. The verdict there depends on how the developer executed this concept.

Live Motion Games seems to take its subject matter seriously. According to the studio, a great deal of effort went into accurately recreating key environments and events. At the same time, this is a game first and foremost. And these days, the decision to slap the word Simulator onto the end of a title is asking for trouble. There are just too many tongue-in-cheek budget games and silly physics platforms using that word, so when you’re trying to produce something that should be treated with care bordering on reverence, it’s not a great look.

So right out of the gate, Live Motion should’ve chosen a different title. That’s hardly a capital offense, though, and for the most part I felt like Chernobyl Liquidators Simulator tries to recreate certain elements of certain experiences respectfully and responsibly, while remaining within the framework of an interactive product. This is a game. The arguments about disrespect and poor taste are fundamentally rooted in the view that some things should not be games, which is an unfair generalization. There are a few missteps in the execution, though, which I’ll get to shortly. 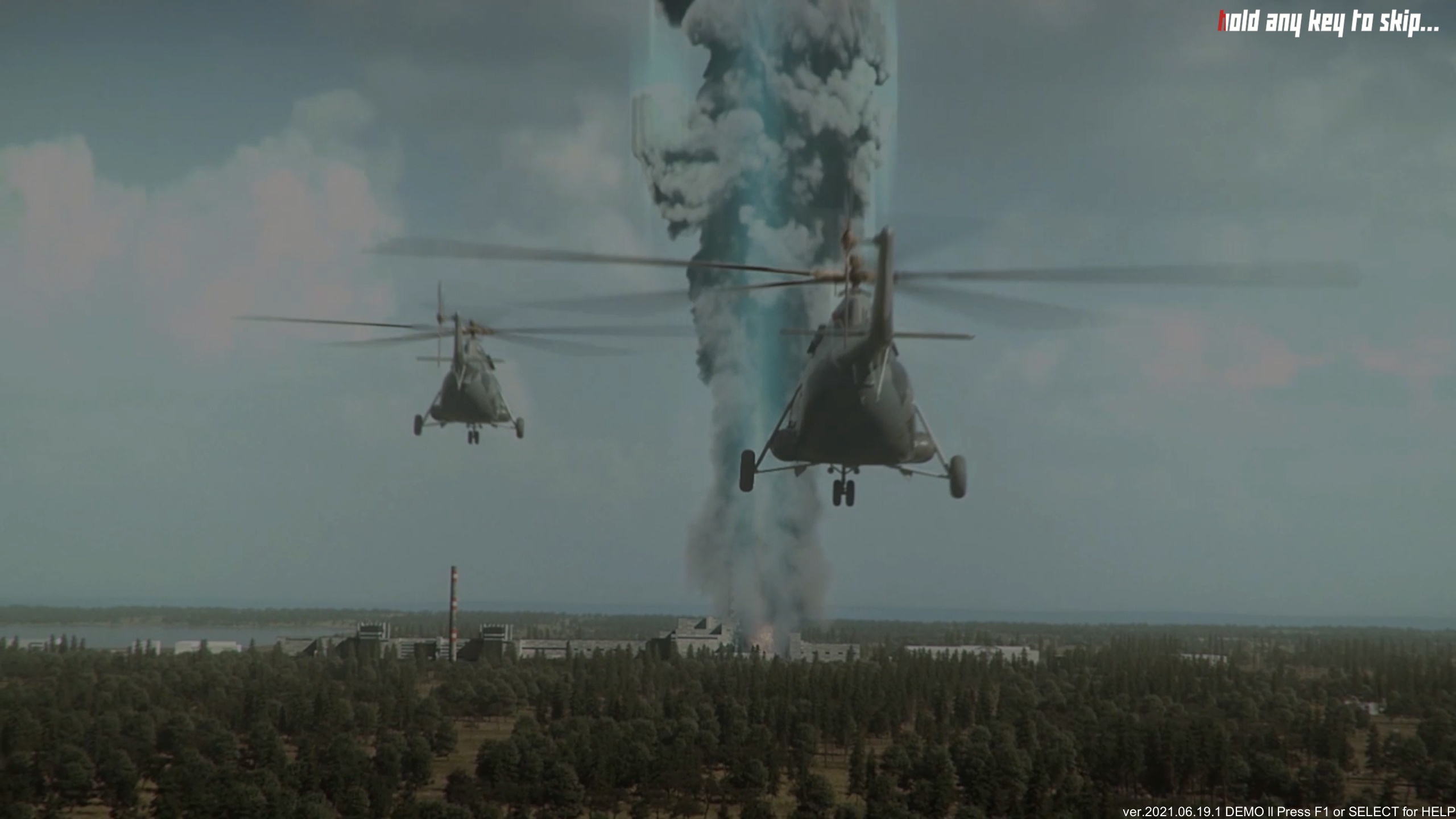 The word “Liquidator” is typically associated with the individuals tasked with cleaning up the area around the Chernobyl Nuclear Power Plant. That process started months after the April 26 explosion: after the evacuation, after fire had been put out, and after the most devastating meltdown scenarios had been averted. But technically “Liquidator” is a catch-all term applied to anybody involved in any response or mitigation effort related to the disaster, which is why Chernobyl Liquidators Simulator isn’t factually inaccurate to put you in the boots of a first responder.

If you watched the miniseries Chernobyl on HBO, or read Voices from Chernobyl on which parts of the drama are based, then you already know the basics: at 1:23am on April 26, 1986, CNPP Reactor Four suffered a catastrophic explosion caused by steam overpressure during a safety test. Fragments of radioactive graphite were hurled in all directions. As the steam rushed out, air rushed in, and the graphite that remained inside the shattered reactor building started burning. Firefighters from the nearby city of Pripyat were first on the scene. In Chernobyl Liquidators Simulator, you’re one of them. 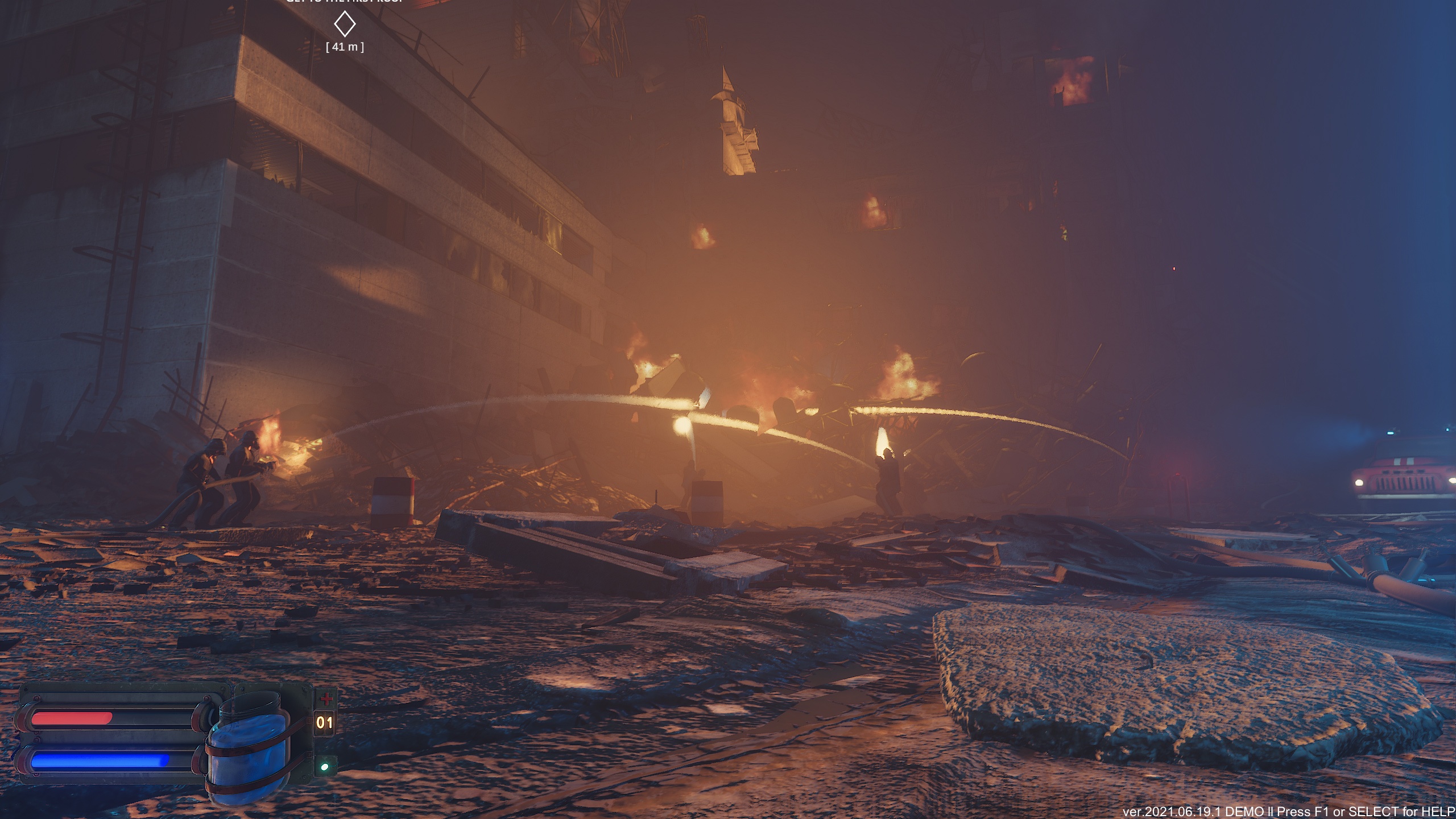 Municipal firefighters from Pripyat were among the first responders. Some were in such a hurry to help they arrived in street clothes, without even firefighter’s gear for protection.

Critically, no one had told the firefighters that it was the reactor building burning. They thought it was an electrical fire, which a civilian fire brigade is equipped to handle. Not being complete fools, they could tell something was seriously wrong: the air was glowing, for one thing; and a spear of shocking blue light stabbed up through the hole in the roof like a laser beam into the night sky. Unnerved but with a job to do, they unlimbered their hoses and got to work. Every one of them would be dead within six months.

Chernobyl Liquidators Simulator certainly does atmosphere well. The shattered reactor building is captured in flickering reds and oranges, shadows of men maneuvering gingerly among the rubble, spraying hopelessly inadequate jets of water toward a blazing, hellish maw of tangled metal and concrete. In some ways this game is like a traditional first person shooter, but instead of a gun, you’re equipped with a hose that sprays water from a pressurized tank on your back. Instead of monsters or Nazis or monster Nazis, you’re shooting at fires. Water is heavy and can’t be compressed, so “ammunition” is maddeningly scarce; your tanks are empty after maybe 15 seconds and must be refilled. The fires are very intense, often dealing out damage long before you’re close enough to actually fight them. 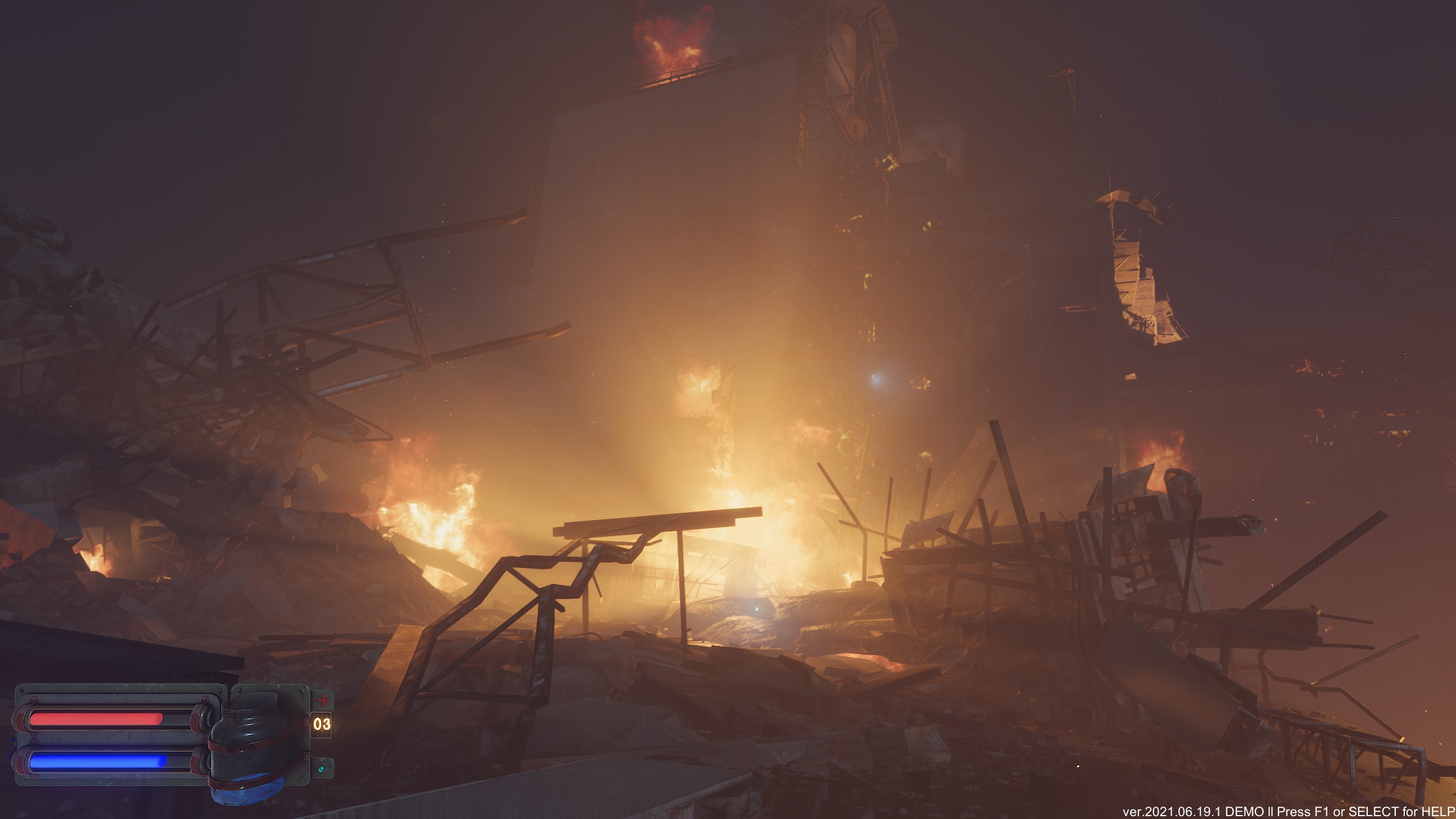 The main fires—on the roof and inside the reactor—were too hot to be fought by conventional means. It would be months before they were fully extinguished.

It takes a while to get the hang of things. Inadequate water effects make it hard to tell how far the hose spray can reach, the colored icons indicating a fire’s status are unreliable narrators, and the often-jerky frame rate makes control difficult. In terms of pure realism, the game deviates heavily from the facts right away. You’re warned repeatedly about radiation, and some of your time is spent gingerly shoveling up radioactive graphite and moving it out of your path. Neither of these things actually happened, and the graphite fragments on the ground certainly didn’t glow like miniature suns as they do here.

Indeed, lots of stuff in Chernobyl Liquidators Simulator is fabricated in the interest of making the game exciting. Your character is instructed to climb onto the burning roof for some reason (no), and poke around inside the shattered complex for a while (no) collecting “health stims” (no) and looking at inter-departmental memos from power plant staff (no) as if you’re trying to piece together the mystery of what happened (no) before ultimately coming out on a catwalk directly above the exposed reactor (no), which has started emitting pulses of heat and radiation like an angry transuranic metronome (no). 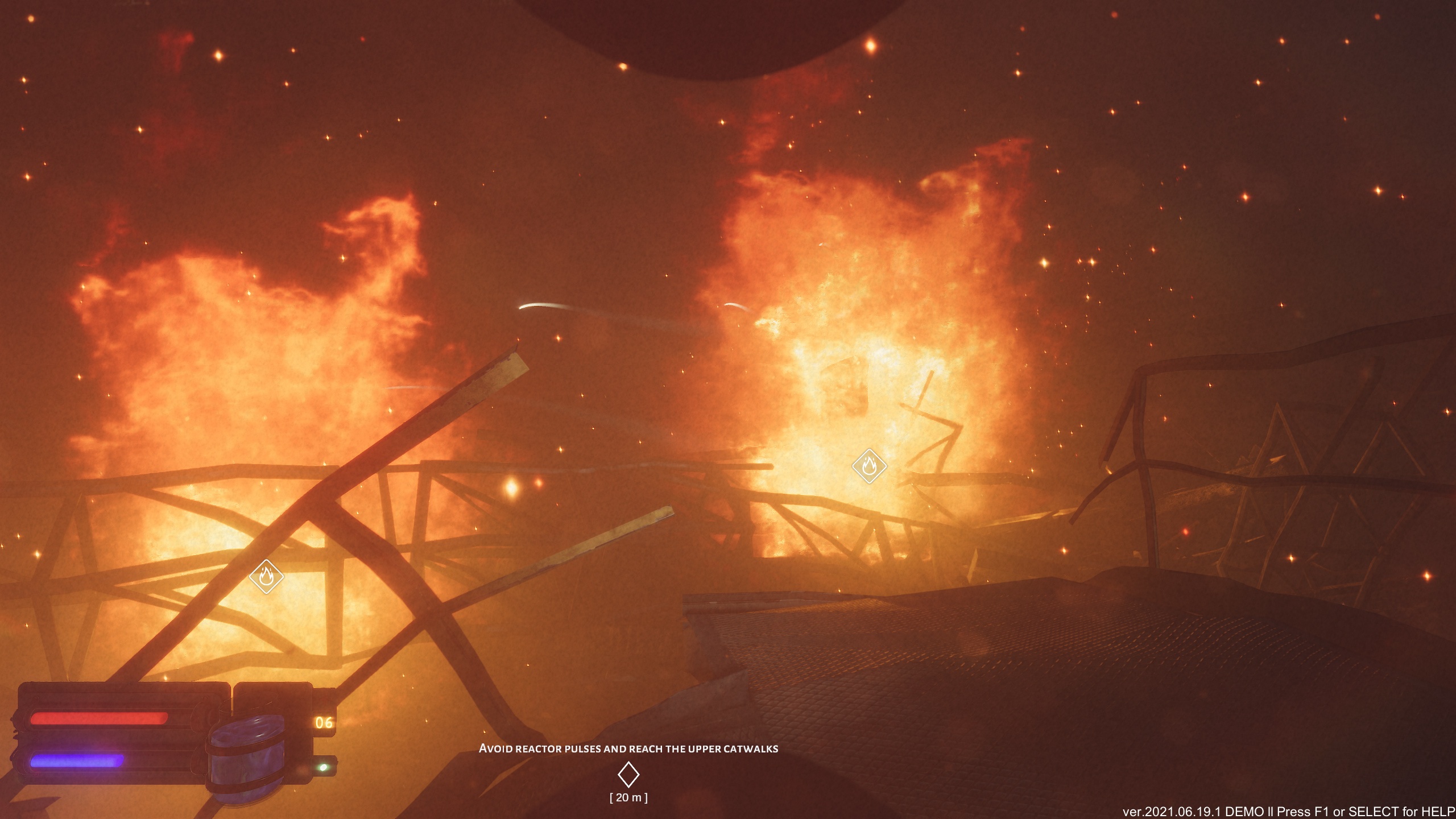 View from the catwalk. The exposed reactor is directly underneath.

Accomplishing this traversal requires you to leap and clamber in jumping puzzle fashion, smash through doors, extinguish fires, and manipulate gas valves to turn off jets of flame you can’t put out. It even includes the classic FPS chestnut of crawling through the air ducts. Every now and then your character wheezes or drops to his knees and vomits himself into a dead faint—this is to remind you that radiation is dangerous, I think—before picking himself up and pressing on.

As I said, it can be quite atmospheric at times. I even shot a bunch of video while playing, because the effect is most pronounced with motion and sound. But the demo’s framerate problems and inherent jerkiness with mouse/keyboard play make it difficult to watch, so I’ll spare myself the trouble of editing it together. 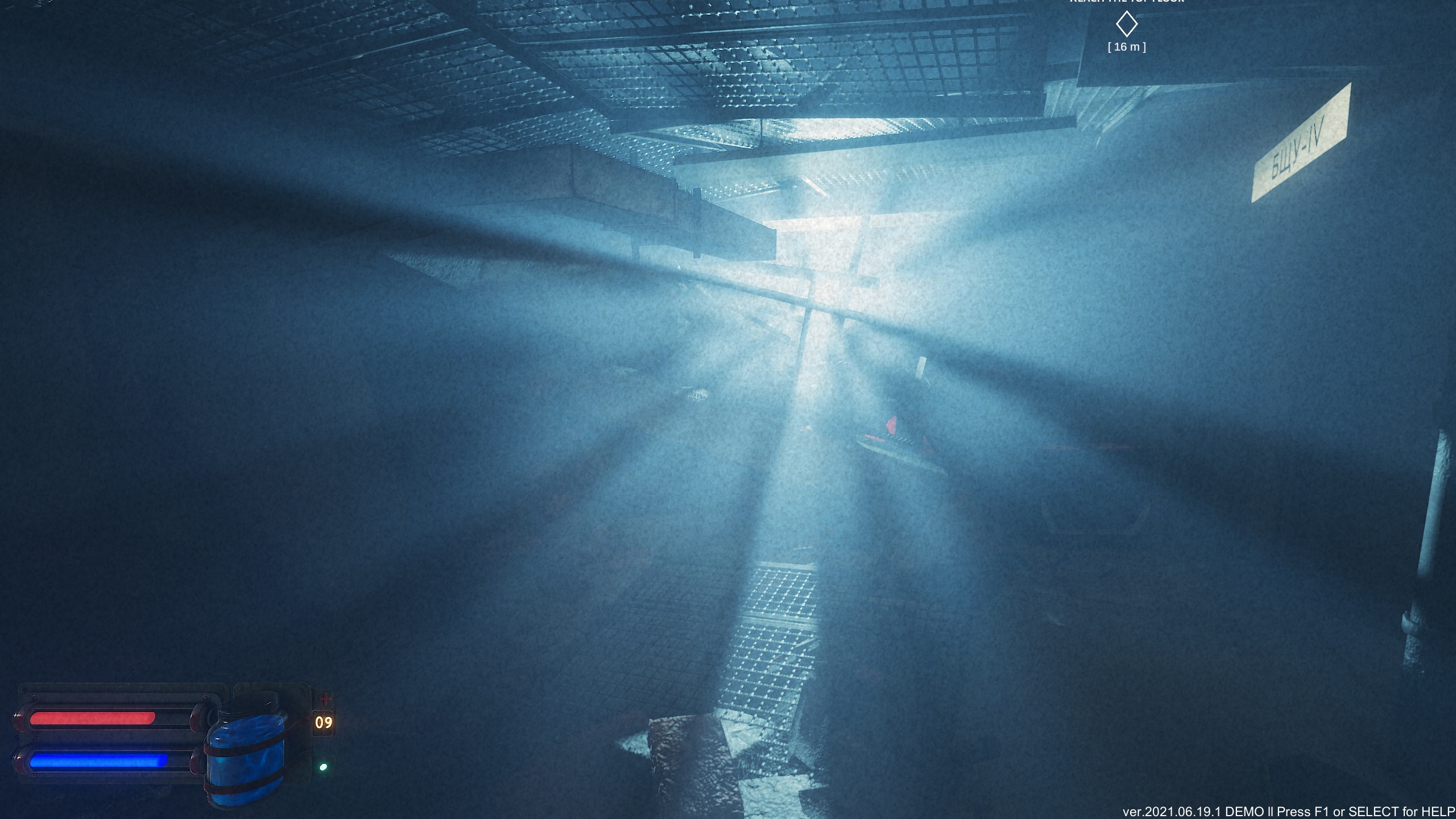 The blue glow of Cherenkov radiation, its blue-ness and glowing-ness amped up for drama.

Atmospheric yes, but it’s also janky, difficult to control, and all too often swerves out of the “simulation” lane and into one reserved for disbelief-suspending video games. This speaks to a problem, I think, not just with the decision to simulate this particular event, but with attempting to simulate firefighting in general. There’s never been a truly great firefighter sim, possibly because the reality of fighting fires isn’t that exciting moment to moment. No one wants to spend an hour and half standing on a ladder pointing a hose in one direction. And some of the immersion is lost when your field of view is peppered with colorful fire icons and objective markers.

The foundation of this game is strong, though. It could simply be that Chernobyl Liquidators Simulator is an early, unreleased product and needs more time to optimize performance, improve the interface, and iterate on certain aspects of the experience. Since there’s no release date set, there’s no way to tell how Live Motion plans to improve the game. I reckon that with six to eight months of polish, Chernobyl Liquidators Simulator could become something fairly impressive. It’s just not there yet. 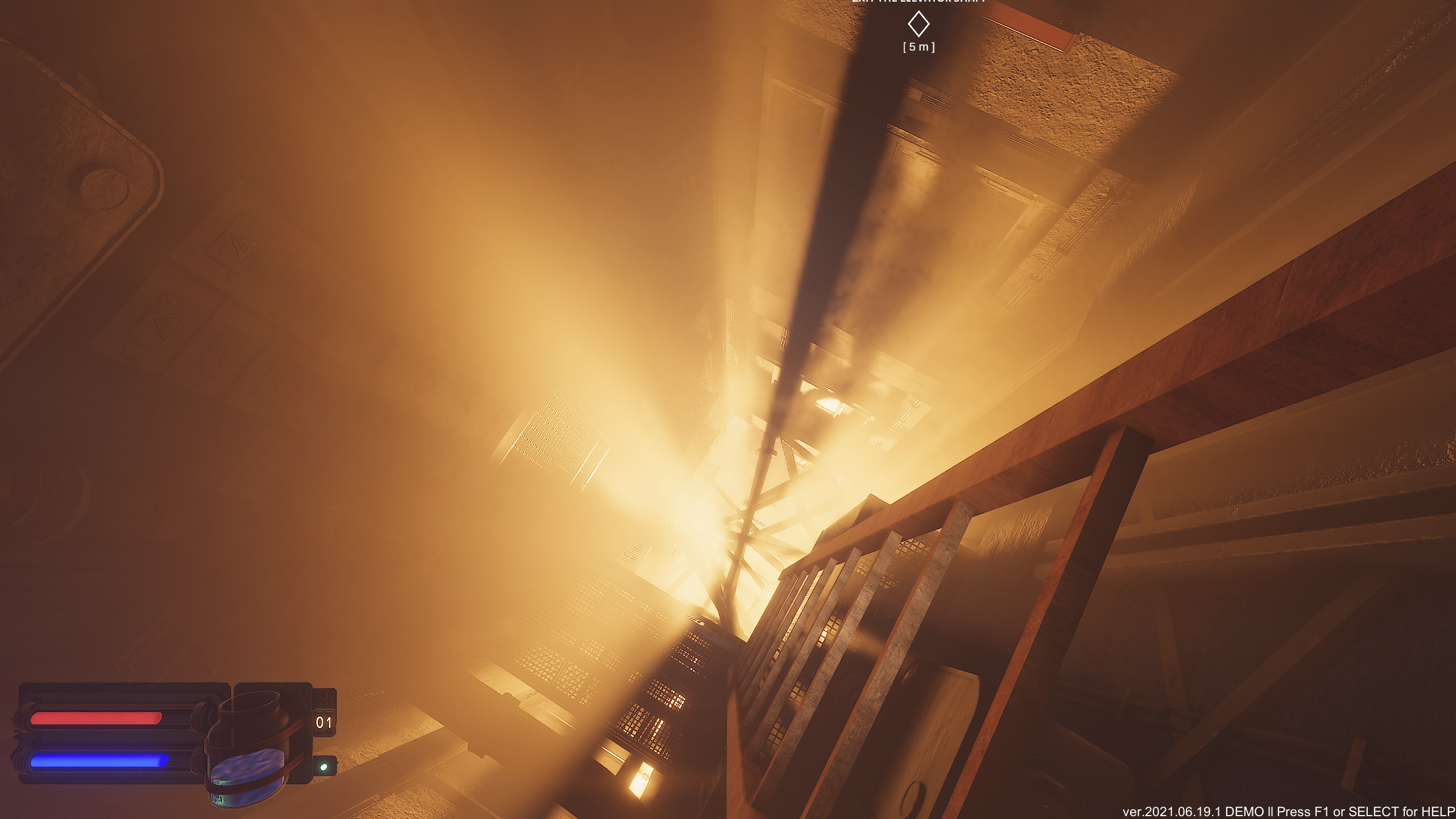 It looks similar to the earlier image, but this time we’re looking down an elevator shaft toward Secondary Reactor Control, near the heart of the fire.

Self-proclaimed Chernobyl Nerds should think twice before finding fault with others who use the disaster as grist for entertainment, and I don’t feel that Live Motion Games was disrespectful—certainly not by intent—with Chernobyl Liquidators Simulator. But I wouldn’t judge others for taking a different view. The developer doesn’t hesitate to assign fictional words and speculative motivations to real people while framing your fictional character as some kind of hose-bearing detective piecing together the truth of what happened that night.

Nor does Live Motion make much effort at simulative realism. As a game, stuff like checkpoints and reloads are unavoidable par for the course; it’s internal elements like health packs and turn-the-power-on puzzles that are out of place here. How out of place is a matter of personal opinion; it didn’t bother me all that much, but others may dislike the thread of gamification woven through the experience.

In a lot of ways I was pleasantly surprised by Chernobyl Liquidators Simulator. It’s hardly a slam dunk, but it has potential, and deserves credit for trying.

Chernobyl Liquidators Simulator is developed by Live Motion Games and published by the developer in collaboration with PlayWay. It is currently in closed-access beta. No release date has been announced.