It might be worth it for Severed Steel, though. This game a waffle sundae of awesome.

So! Day 7 has arrived. Steam’s Next Fest came to an end yesterday, and as I suspected, a bunch of my demos are no longer available to play. Not all though, so while I can’t guarantee we’ll make the full Dozen Days without running out of stuff, we’re not out yet. I installed about 20 demos last week to accommodate for ones that didn’t work or turned out to be bad subjects for discussion. All the icons are arranged in a pair of tidy columns on my desktop, and Severed Steel was actually the ninth. Succubus and another one I can’t remember came before it. But they deactivated, so this got promoted.

Severed Steel is a warp-speed first-person shooter with heavy emphasis on “stunts:” running on things, diving through things, sliding under other things, and shooting guns at things while generally behaving like a human Tsui Hark film. Stunts are the core of the gameplay. The stunts, and never stopping for any reason ever I’m so not kidding about that seriously I mean it just keep moving always you’re like a shark that dies if it stops swimming except instead of swimming you’re running and instead of anoxia you’ll die because a villain shot you so keep moving at top speed it doesn’t matter which way you go just go what is wrong with you go I mean it stop looking at me and move fool I said go go go GO GO GO GO G-aaaaaand you’re dead.

I did warn you. 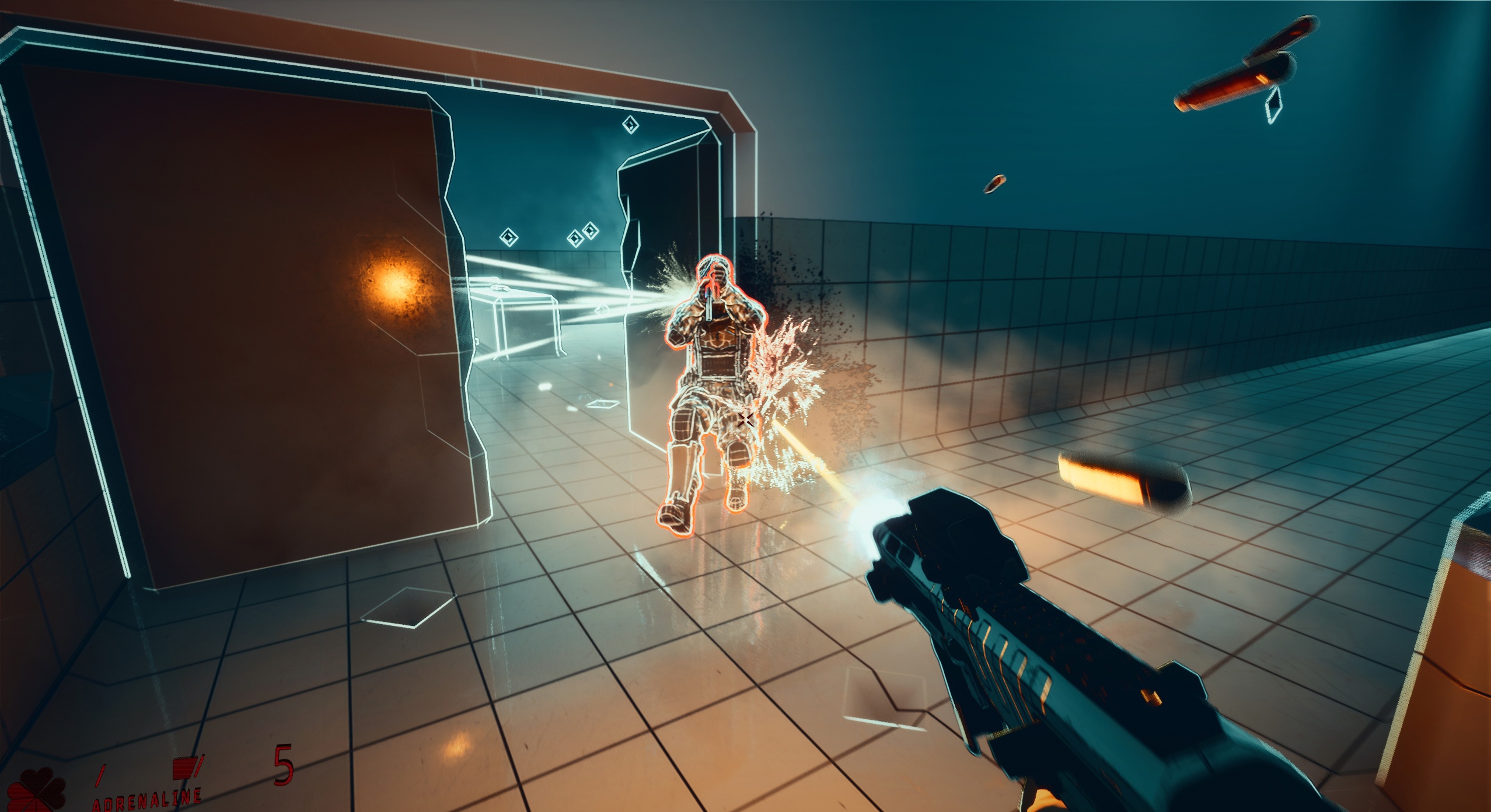 Strangely, the comparison game that comes most vividly to my mind is Superhot. The strangeness is because Severed Steel is VERY FAST and Superhot—while not exactly slow—certainly enjoys a different relationship with speed. Superhot can be an incredibly fast game, but time only moves when you move; therefore you have to stop, often, to evaluate the situation and make considered decisions. In Severed Steel, time is always moving (as time will) and you quickly learn that stopping for any reason, or making conscious decisions of any kind, means you’re playing it wrong.

The result is like a flash of lightning that doesn’t end. At first it’s so chaotic you won’t even know what’s happening. But as you play—as the controls become more comfortable, as your conscious brain steps back and your reflexive, don’t-think-just-react brain takes the controls—then Severed Steel comes into its own and you enter a kind of flow state. Play becomes musical. Never think about what to do. Just do it.

You’re a person being attacked by other people. As far as I can tell that’s the plot. Maybe someone has severed some steel? I don’t know. Run on walls! Not to cross holes, but because the wall is there. Dive through glass windows! Because of all the ways to enter a room, that one is the most awesome. Skid along the ground! Sometimes to scoot under low-hanging stuff, but also because why shoot a person while standing when you can shoot a person while hurtling toward them on your ass like a human murder toboggan. 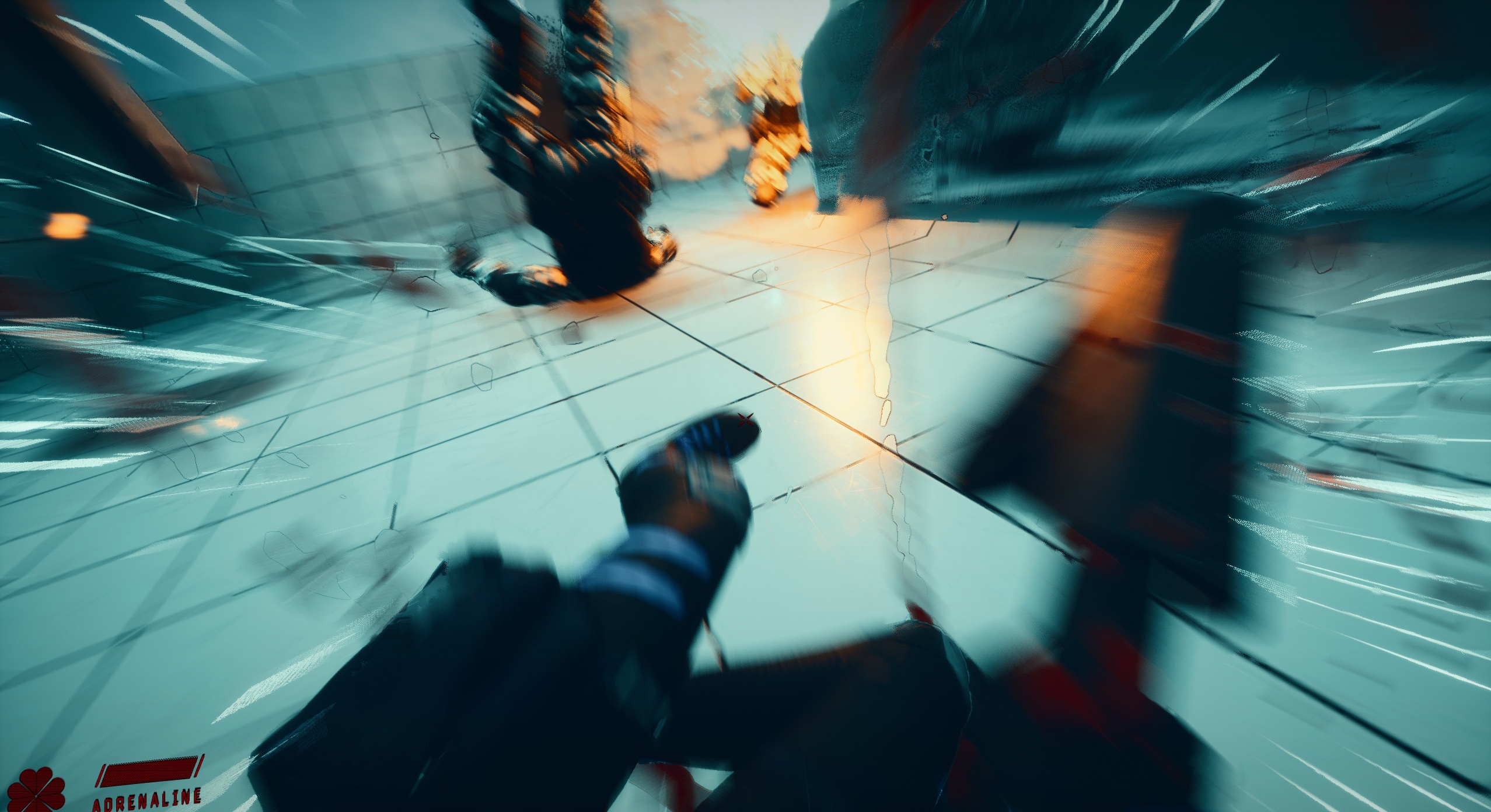 Basically you’re looking at WASD plus three other keys, all placed logically enough that it only hurts a little to use them all at once. You get a quick in-game primer on the controls, but Severed Steel stops holding your hand about two minutes in. It’s harsh but necessary. To do well you need to act reflexively, without processing. And you need to learn that critical skill on your own, not by taking to suggestions from the game.

Standard shooter fare for the most part, but like the time-moves-when-you-do conceit of Superhot, there’s a twist: you can’t be injured when you’re doing stunts. Run down a hall and you’re vulnerable. Slide down the hall, or bullet-dive down the hall, or sprint along the hall-wall, you’re fine. So obviously the more you do these things, the better. Once you grasp that on an instinctive level, once you stop thinking about which key is “dive” and which is “slide,” that’s when you enter the zone.

You still get killed constantly. It doesn’t become easy just because you’ve grokked the controls. But once you start thinking and reacting at the speed Severed Steel demands, the chaos becomes manageable. Instead of just randomly mashing buttons, you start to string moves together, and begin to gravitate toward a certain playstyle. 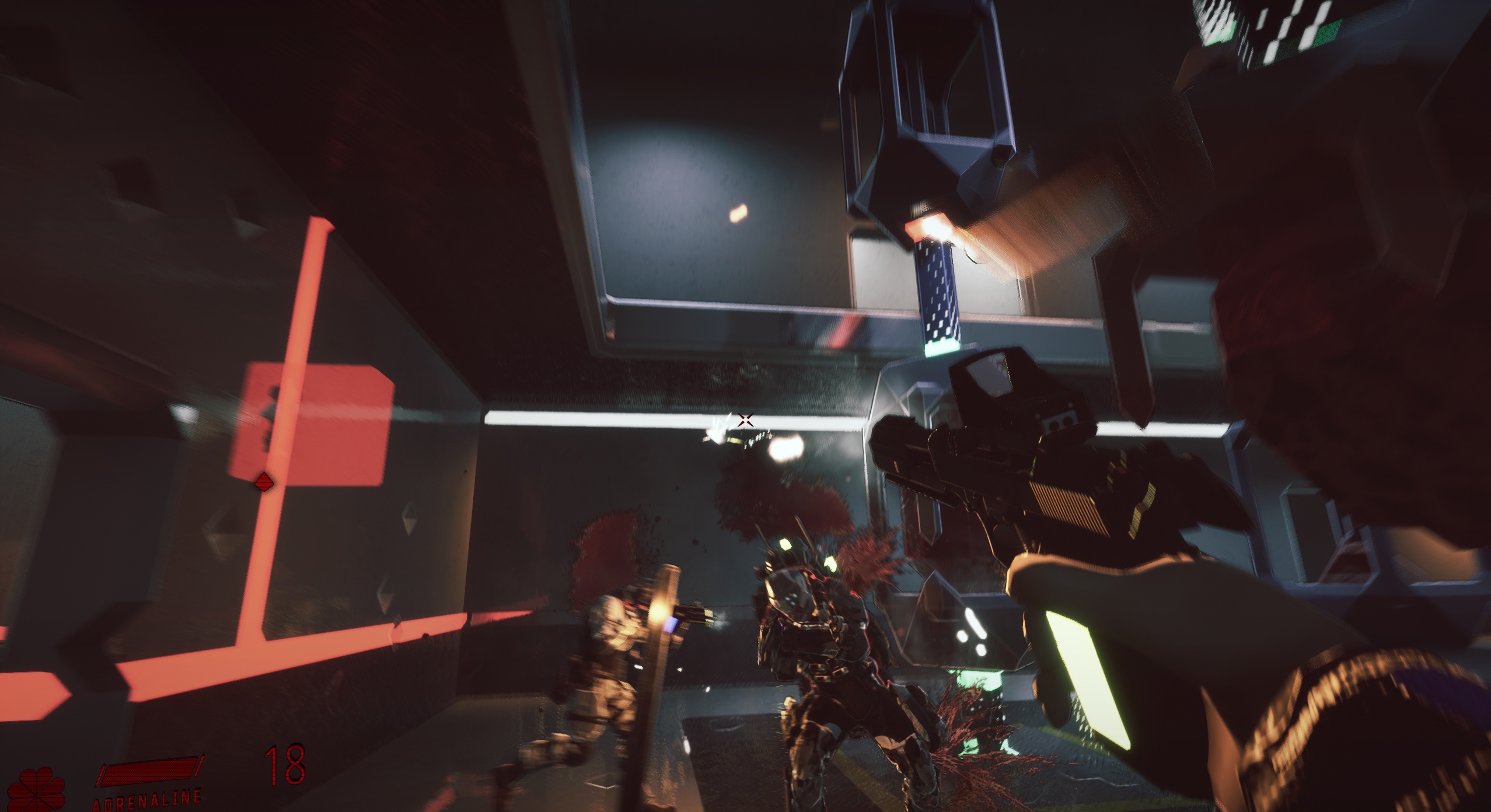 As enjoyable as playing Severed Steel is, I think it’d be even more enjoyable to watch someone else play it, especially if they know what they’re doing. You can’t appreciate the ballet as much when you’re in it; it’s too intense. I can see this becoming a streamer staple, because spectating is downright hypnotic. And whether watching or playing, you get to enjoy the fabulous soundtrack and clean visuals.

Like Mirror’s Edge, Severed Steel does break down a little when the action falls off. This is rare, usually occurring when you’ve cleared a level of enemies and completed the objective but aren’t sure how to leave. Since you move through areas almost at random, choosing your path based on expedience of stunts rather than any kind of cognitive navigation, you may find yourself roaming a familiar-looking area but having no idea where you are or how the space is put together. Though Severed Steel endeavors to offset these moments with objective and exit highlights visible even through walls, you will find yourself with downtime now and then. It’s not a big deal, but the game might be better served by just ending the mission when you complete the objective. 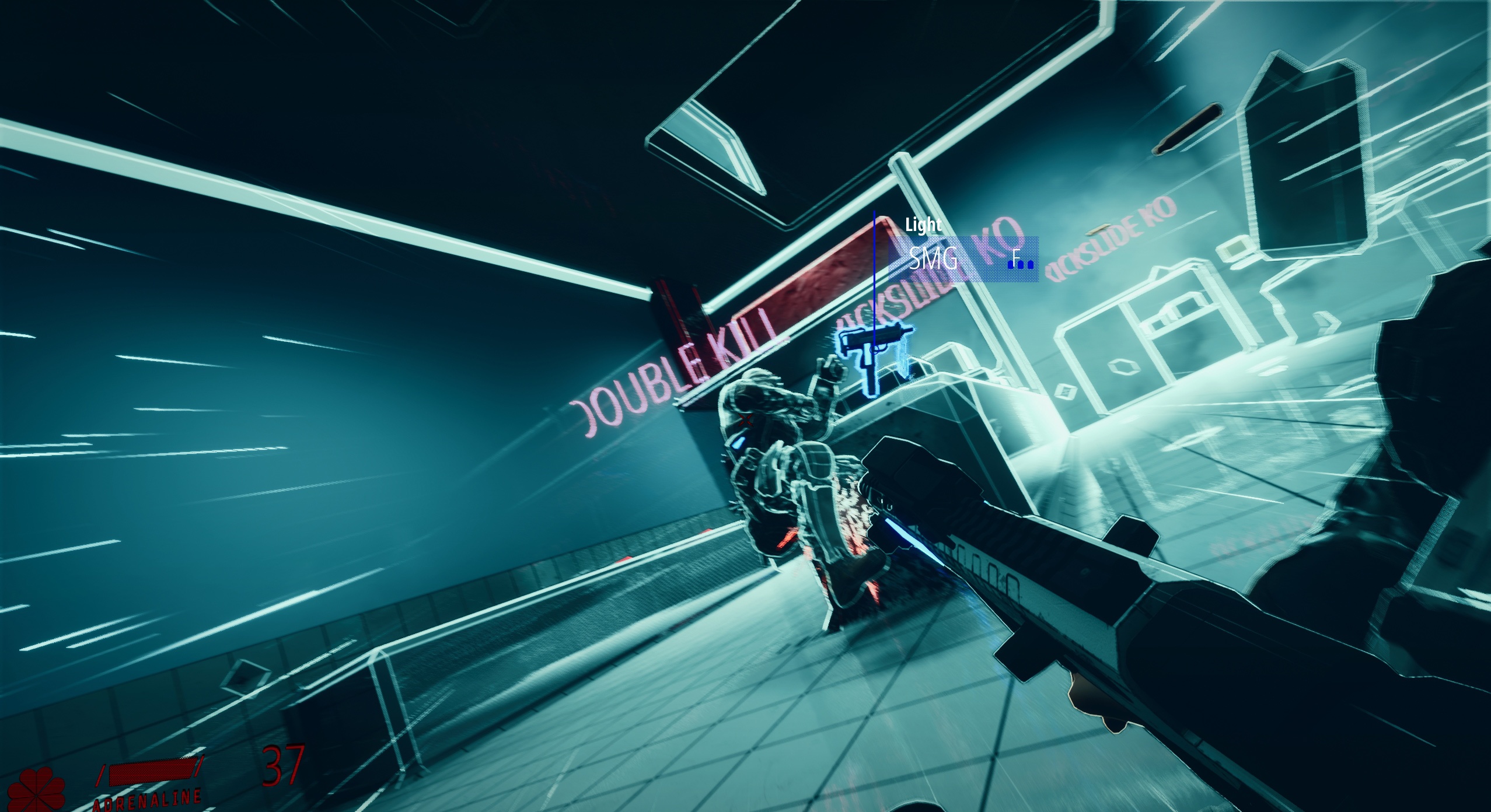 This isn’t a $60 game (at least, it shouldn’t be), and it’s not a game you’ll spend hours at a time with. It’s a game you play in 20-minute bursts when you need some adrenaline. Forget cocaine; if you’re feeling lethargic, just do a quick bump of Severed Steel and you’ll be back at full power in no time.

By the way, I wound up with 4,236 screenshots of Severed Steel. It was easier to just order ShareX to capture a shot every second than to try and take them manually. Stills can’t really do justice to the kinetic, high-RPM feel of the game no matter what, but at least this way there was a chance that at least a couple snaps included some sense of the action. I wrote this paragraph before I sorted through them, though, so no promises.

What is this steel? Who severed it, and why? I don’t know. Maybe you find out later. But who cares, it’s a blast. Give it a try.

Severed Steel is developed by Greylock Studio and published by Digerati. No release date has been announced.