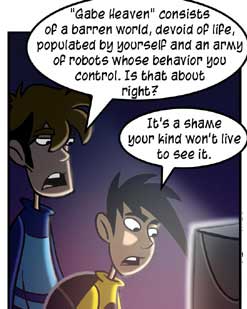 With all due credit to Penny Arcade for the image that defines not only Gabe, but Steerpike as well.

This comes up because Dave Perry, formerly sort of still of Shiny Entertainment, opined at D.I.C.E. that “the days of single player gaming are numbered.” He goes on to say that “without question, our focus is entirely on multiplayer.” Dave, you’re a frickin’ genius… of course, everyone knew that, since you drove Shiny into the ground, singlehandedly transforming it from one of the most innovative and clever powerhouses of the industry into That Place That Made Enter the Matrix. Complaints continue below.

In college, I studied Roman History. And one of my TAs consistently graded me down for making what he called “sweeping, generalized statements” about a culture or event. In fairness, he was right. Careless historians say things like “Christianity caused the Roman Empire to fall,” or “Caesar was murdered because people feared he had too much power,” when in fact any event is really a perfect storm of smaller occurrences collaborating to effect a large change. So while I still make sweeping, generalized statements, I do so now knowing that it’s wrong, and I feel suitably shamed.

Saying that the days of single player gaming are numbered is a sweeping, generalized statement. Perry, who knows he’s responsible for the ruination of what was once considered a truly great studio, is now saying crap like this for attention. (which I guess I’m giving him, but hey). Incidentally, while we’re being mean, Perry is a very outspoken advocate against quality of life reform in the industry, which makes him one of my arch-foes. He’s also really tall and I don’t like super-tall people.

Anyone who makes a remark like this is ignoring the general misanthropy of the gaming world, and the inherent privateness of video game play. While multiplay is huge, and will get huger, it is not going to fully eclipse the world of single player any more than television eliminated radio. “Play” as an entity has long been communal – you “go out and play” as a child, usually because your Mom kicked you off the videogames and told you to go outside; you “have friends over to play,” etc. etc. etc. But videogames, part of the larger whole, started as individual experiences and have a long and successful life as such. The advent of multiplay has, in some ways, increased the level of isolation.

Think about it. In the case of MMOs and even group-based shooters like Left 4 Dead and Team Fortress 2, most of the time the physical players are miles apart. The age of the LAN party is over. The only true multiplay is when people get together to enjoy games – something I like to do with friends, but each time we bemoan the shortage of really excellent split-screen titles out there. I tell you, there’s no fun like pummeling your best friend with a chair in Smackdown vs. Raw as two of your other best friends pound one another with sledgehammers, especially when you just rented the game from Blockbuster and no one knows what the controls are. But year after year, when we get together for a weekend of this, we find ourselves playing the same games, despite the fact that titles like Crackdown and Dead Rising have same-room, co-op multiplay written all over them.

Multiplayer games, particularly MMOs, are a dangerous proposition. They cost much more to make, are much harder to balance, tend to be much more vulnerable to attacks, and often crash and burn. If I had a nickel for every developer that in the past two years insisted its MMO was going to bring down World of Warcraft, I’d have like sixty cents. Now the millions spent on each of those games is money up in smoke, as the litany of failures batter themselves to pieces against the bulwark of WoW. It’s the game equivalent of the walls of Constantinople, and I have clear advice when studios ask my opinion about their building a World of Warcraft killer – don’t even try.

Furthermore, a lot of people, myself included, prefer single player games, always have, and always will. This is partly because I loathe most people and would much rather be in my own company, but also because the single player experience is, to me, revelatory in ways that multiplay never is. Single player games can tell stories, present themes, and hook the player with emotive narrative in ways that multiplay simply can’t. So Dave Perry, my advice to you is this: you’ve already made an ass of yourself creatively; you’re on record stating that working 16-20 hour days with no overtime is a sign of “passion” and to be expected; don’t put your foot any further into your mouth. Sweeping, generalized statements make for good conference fodder, but in the real world you’ll get a bad grade every time.