In the interest of full disclosure, I want to say right up front that I am not a member of the Cult of Sable. I have nothing against the game beyond a vague, polite confusion borne of the existence of an entire subculture that’s been obsessed with it for going on two years now.

Sable is an environmental platform/puzzler from the two-man indie startup Shedworks. If you follow video games at all, you’ve probably heard of it; I’m not kidding about the obsession thing. Even some press outlets seem to talk about nothing else. If I sound critical of this fervor, it’s because people who should know better nonetheless ginned up a lot of excitement over what amounted to a handful of tantalizing screenshots. The fact is not much was known about Sable until fairly recently, and it seems ill-advised to go crazy about a game based on its art style alone, however striking that art style happens to be. 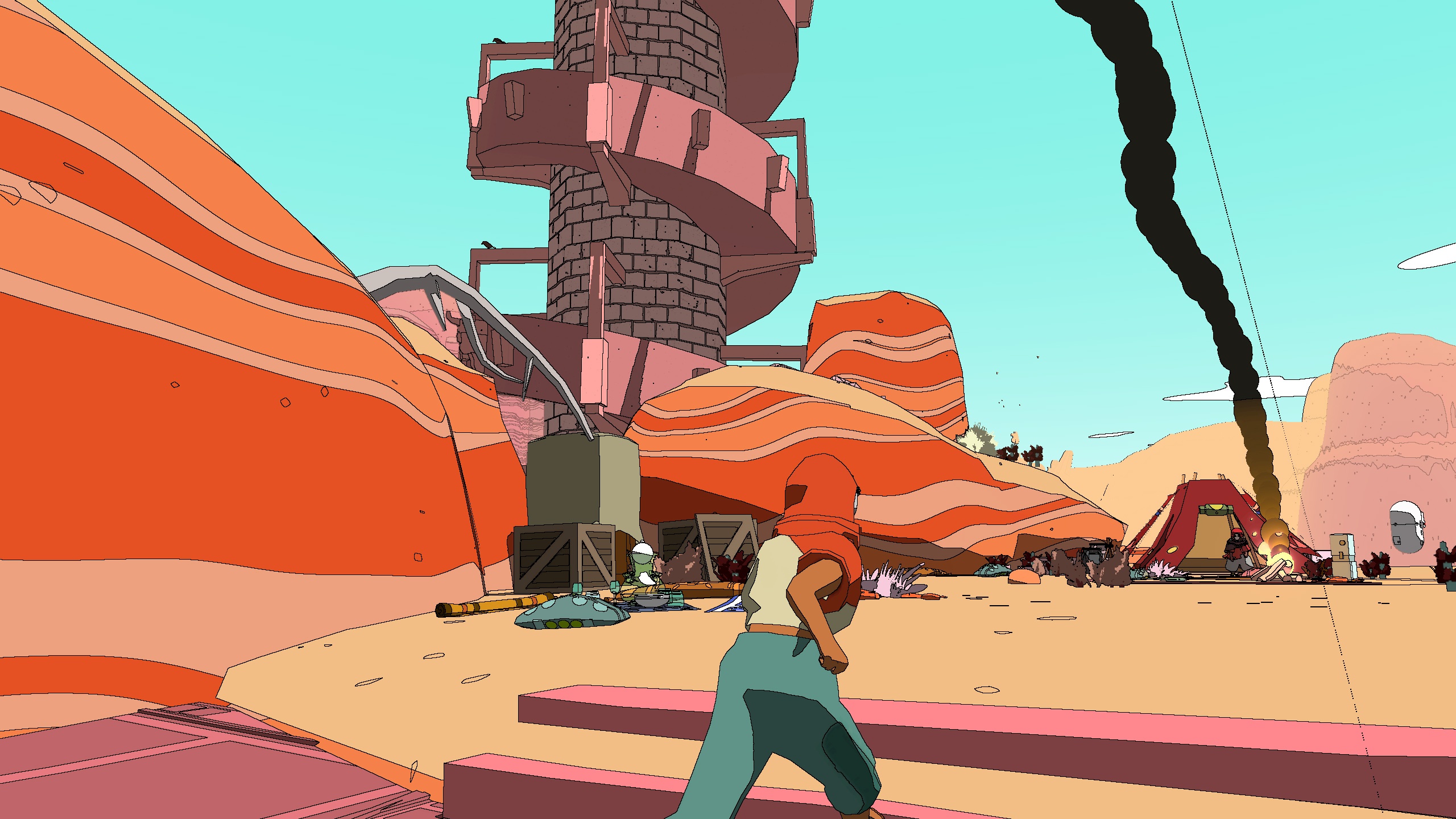 See? Striking indeed. But there’s a but.

Now that I’ve spent a few hours with Sable, I know it’s not just a pretty face. It feels good to play. In fact, having played it, I feel like Sable’s Ghibli-inspired, cel-shaded visuals—which looked so good in stills—are actually a bit disappointing in motion, when the noticeable paucity of tween frames in character and object animations jerks to the fore. The vivid desert hues may pop in carefully selected screenshots, but half the game takes place at night, when its lurid sunlit dunes wash out into faded shades of blah. 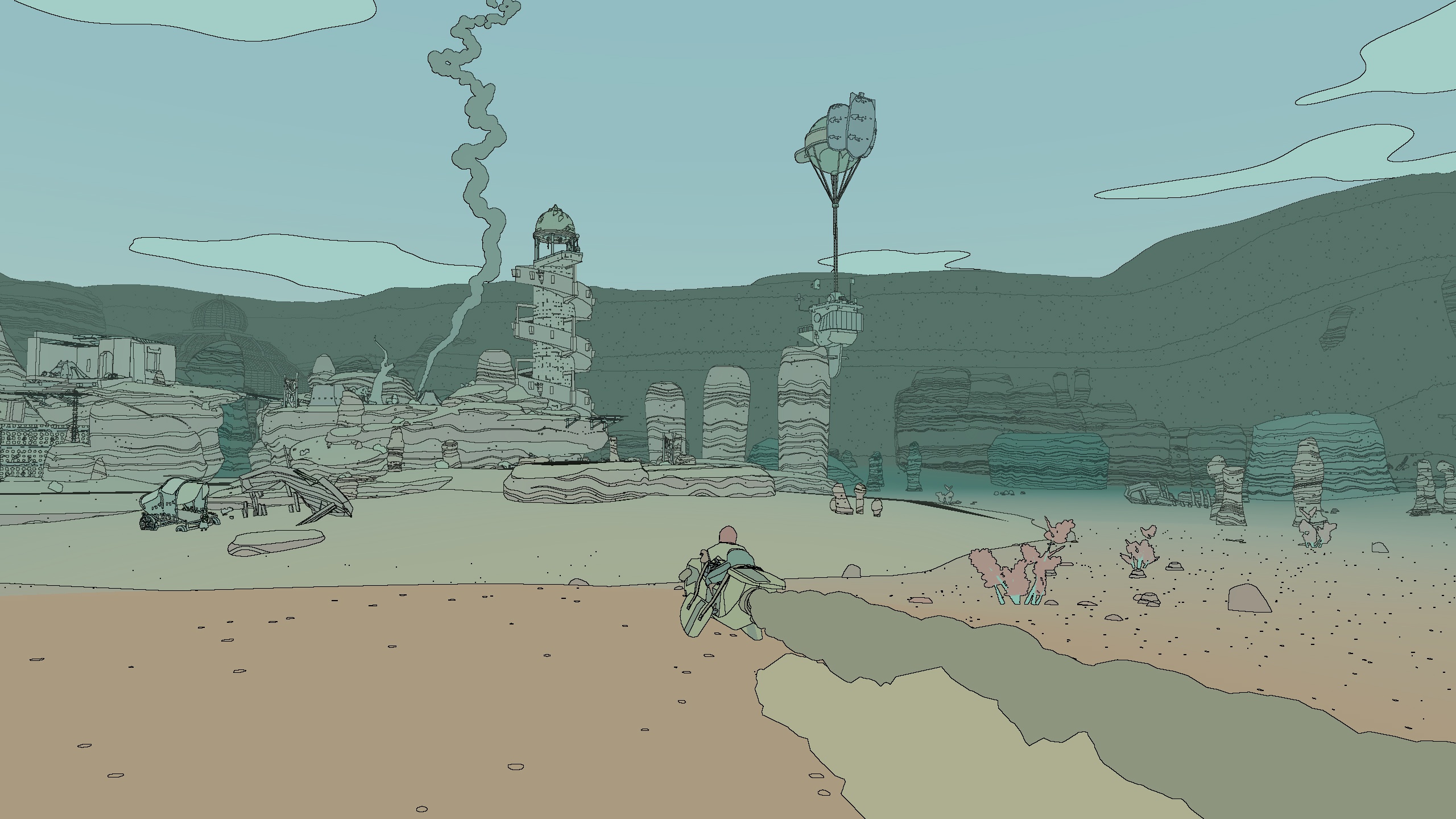 Night and pre-dawn are disappointingly washed out. And like the rest of Sable’s visuals, the still shot looks far better than the game.

Sable is often arrestingly gorgeous, but less than you might expect. It shows better than it tells, at least in terms of visuals. I can’t remember the last time I saw a game that needs anti-aliasing as badly as this one does. Those stark colors and strong lines devolve into serrated jags at close range, even at 1440p, and the demo at least offers essentially no options to fine-tune the effects. 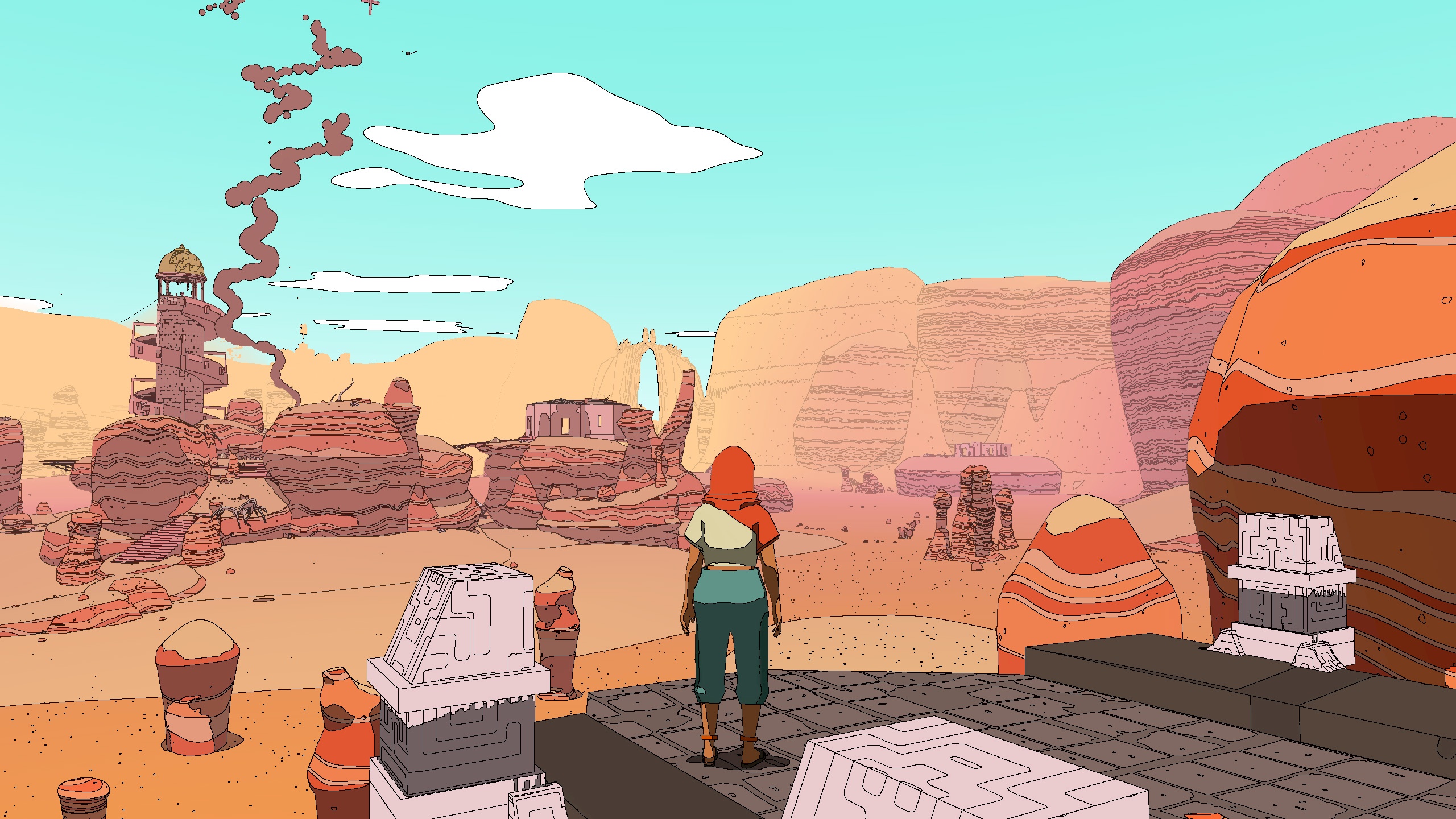 FXAA, you’re our only hope.

Frankly I wish it were otherwise, given how much work clearly went into Sable’s painstakingly hand-drawn environments. But the light at the end of the tunnel is that while I found the visuals disappointing, pretty much everything else about the Sable demo was outstanding.

The demo opens on the morning of the title character’s sixteenth birthday. That’s the age when young people of the Ibex Tribe embark on a rite of passage called the Gliding: saying goodbye to family and friends, they set off into the desert, alone. Sometimes they come back and sometimes they don’t, so the Gliding is a bittersweet celebration, but it’s central to the tribal identity and the individuality of its members. Every Ibex wears a mask—all the time, apparently—and while kids get a sort of generic one, grown-up masks are unique. Find your mask and you find out who you are. That’s what the Gliding is really about.

Like any good birthday there are presents involved too, and since teenagers tend to be more immediate in their thinking, that’s the focus of young Sable’s attention throughout the day. It’s understandable because a Gliding birthday means some seriously nice gifts: chief among them a custom hoverbike for the pilgrimage across the dunes. This is a much bigger deal than getting a car; each hoverbike is hand-built by a specialist and becomes part of your identity from that moment forward. It’s all Sable’s been able to think about for months, and who can blame her. 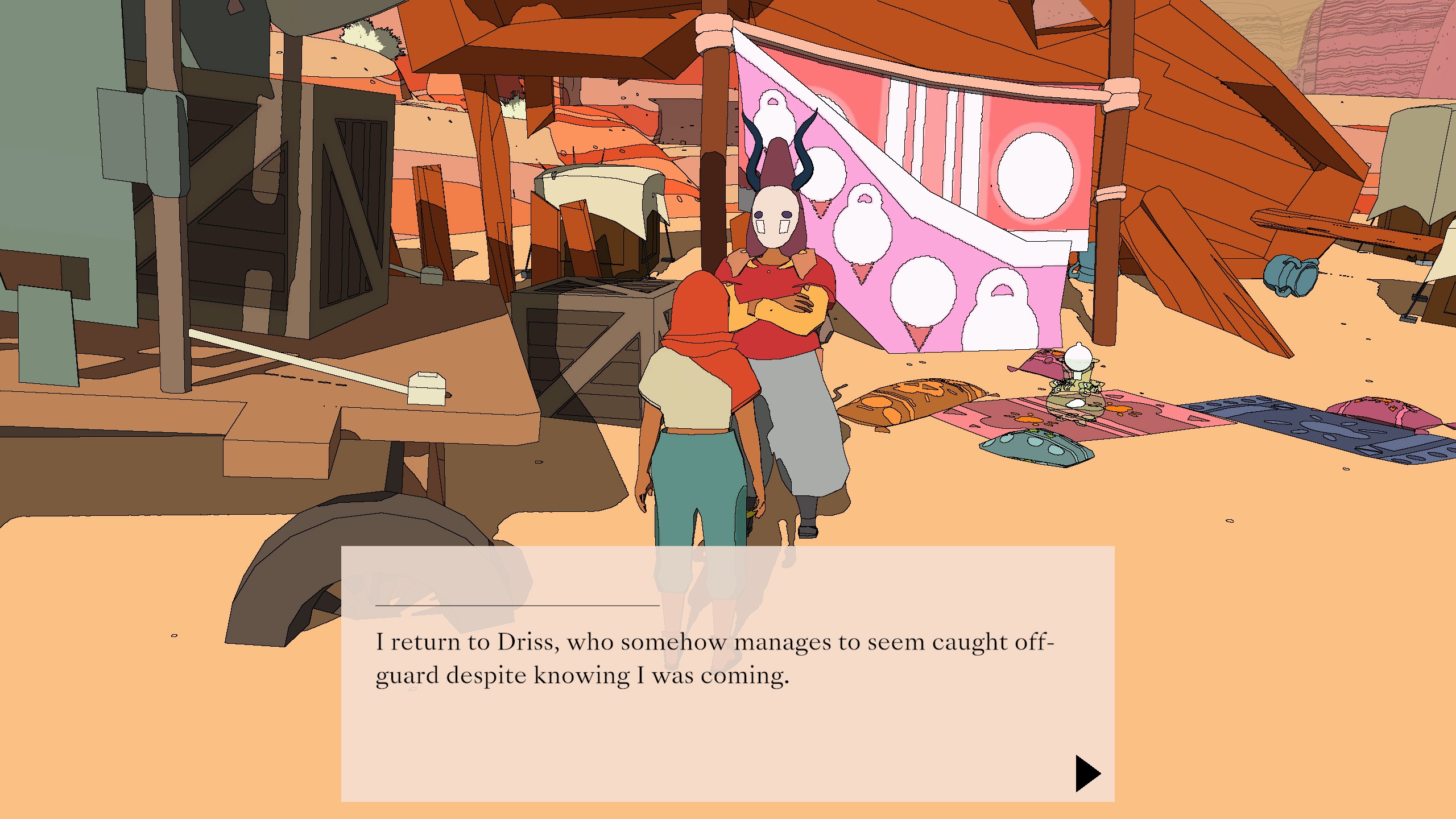 This community needs a more on-the-ball Bike Guy, I mean it.

In a moment of presumably intentional hilarity that channels the worst fears of every teenager, Sable turns up at the bike-maker’s yurt to discover that not only did this man forget her birthday, he forgot to build her bike, full stop. Thus begins our heroine’s personal Sixteen Candles nightmare.

Mr. Forgot Your Bike “solves” the crisis by giving her a rusty, broken-down hoverwhatthefuckdude instead, cheerfully warning about the possibility of engine fires. Strictly speaking all I was supposed to do was take this sputtering deathtrap for a quick spin, but since he didn’t specifically ask for it back, I “forgot” to return it for the rest of the demo. 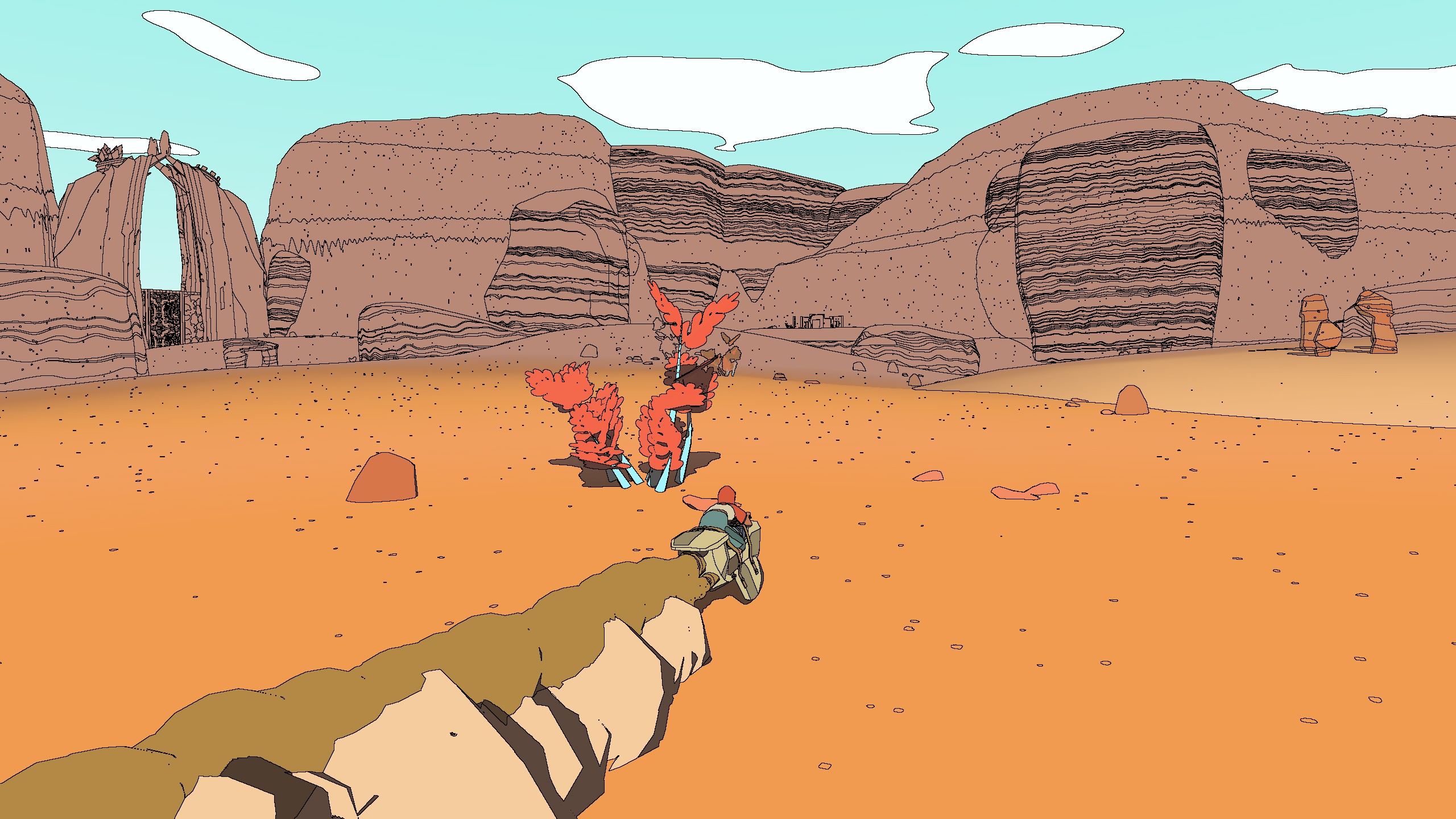 “Happy birthday, Sable! I got you this tetanus-ridden, hand-me-down misery scooter that could catch on fire at any moment. Many happy returns!”

All is not lost, though, because the other thing a youth gets on her Gliding day is the ability to, er, glide. I’d call it “flying,” but it’s really more “falling with style,” which when compounded with the travesty of a hoverbike I’d rightfully stolen felt more like an insult than a gift. So Sable has some light roleplaying elements too, and they’re pretty great for the most part. The dialogue is wry and humorous, managing to extract a fair amount of comedy from Sable’s plight while still doubling down on the more poignant characteristics of this weird tribal custom: the limited flight, for example, is predictably life-changing but fades with age; something the older folk at camp are quick to remind Sable about. Her grand liberating adventure is a short-term event, just like youth itself.

From there the Sable demo settles in to what we’ve been given to understand most of the game will be: exploring, climbing up things, jumping off things, finding things you’ve been asked to find, and solving environmental puzzles to get from A to B. There’s another bike-maker in camp, who helps Sable make lemonade out of the trauma of the most important day in her life being forgotten by promising that if Sable finds the parts, they can work together to build the bike she deserves. 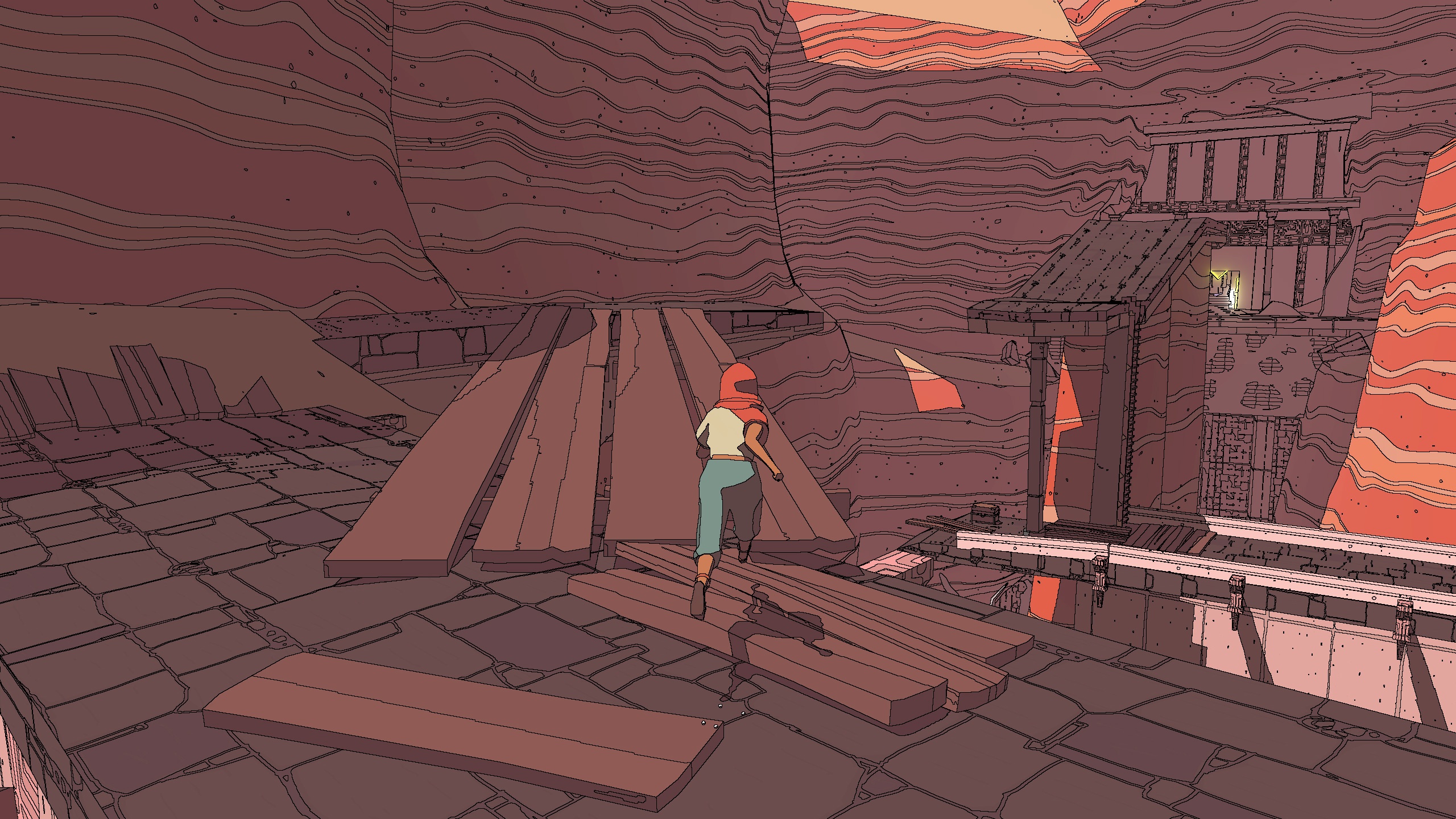 Cue a child who agrees to disclose the location of a critical component if Sable drops what she’s doing and hunts beetles. Thankfully, one of Sable’s dialogue options is “You are a horrible child,” which felt nice to say even if it didn’t get me off the hook for the insects. By this point I was pretty in tune with my protagonist and I’m almost certain that Sable was making a mental list of all the people she would shortly murder. I put the kid on it and promised myself that her body would never be found.

Controls are everything in a platformer, so it’s nice that Sable’s are elegant and responsive. The clunker hoverbike shudders and smokes and backfires, but driving it is thrilling nonetheless (which makes it all the more agonizing when the demo ends juuuuuuuust before you get a chance to try out Sable’s real bike for the first time). Playing with an old corded 360 controller, Sable felt smooth and natural whether I was riding or on foot. 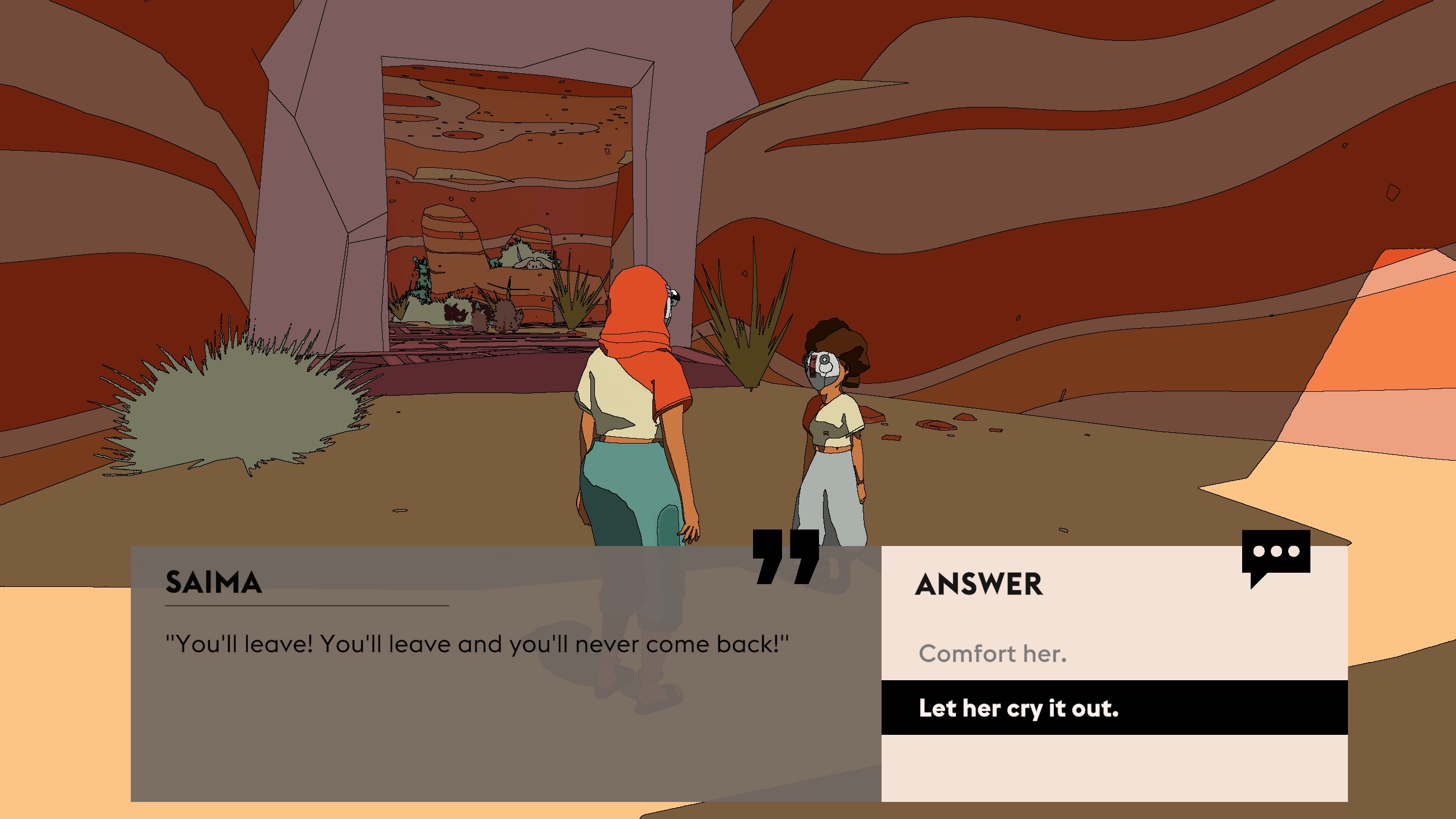 That’s right! I will leave. And I won’t come back. Because of children like you.

I should add: though I fully intend to carry out my plan to murder the beetle girl and the man who forgot my birthday, it will only happen in my dreams. There’s no combat or violence in Sable. I’m not sure if failure is an option, either, since Sable doesn’t take fall damage and nothing in the environment was actually dangerous to the protagonist. And while it’s billed as a platform/puzzle game, the demo at least doesn’t lean too hard on the “puzzle” side of that equation, preferring instead to be a low-pressure exploration-focused experience.

If the point of a demo is to sell people on the full game, then Sable’s is a successful demo. I won’t commit to buying it the day it comes out or anything, but now that I’ve seen how much it seems to offer, any sense of wariness I had is gone. If exploration, platforming, and sentimental coming-of-age stories are your bag, then Sable, with its very few flaws and many delightful qualities, should go on your shortlist.

Sable is developed by Shedworks and published by Raw Fury. It will (probably) be released on September 23, 2021 for PC, Mac, and Xbox Series X/S.