Could Bandit Simulator be the greatest game ever made? Yes. Yes it could.

But it could be.

Remember AJ’s Deadly Premonition review, when she said that game is “not ‘so bad it’s good,’” but rather “it’s really, really good” (she’s right, by the way)?

Bandit Simulator is on the threshold of being so bad it’s good. Really! At present, though, it’s just bad, but in a specific, highly entertaining way: picture a Thief/Mount & Blade hybrid programmed by meth-addicted sea otters living in a bounce house.

Notice: apparently there’s a Roblox game called Bandit Simulator. We’re not talking about that one. And when it comes to who these Bandits are and why they might be Simulated, the confusion doesn’t end there. More in a second. For now, the game! 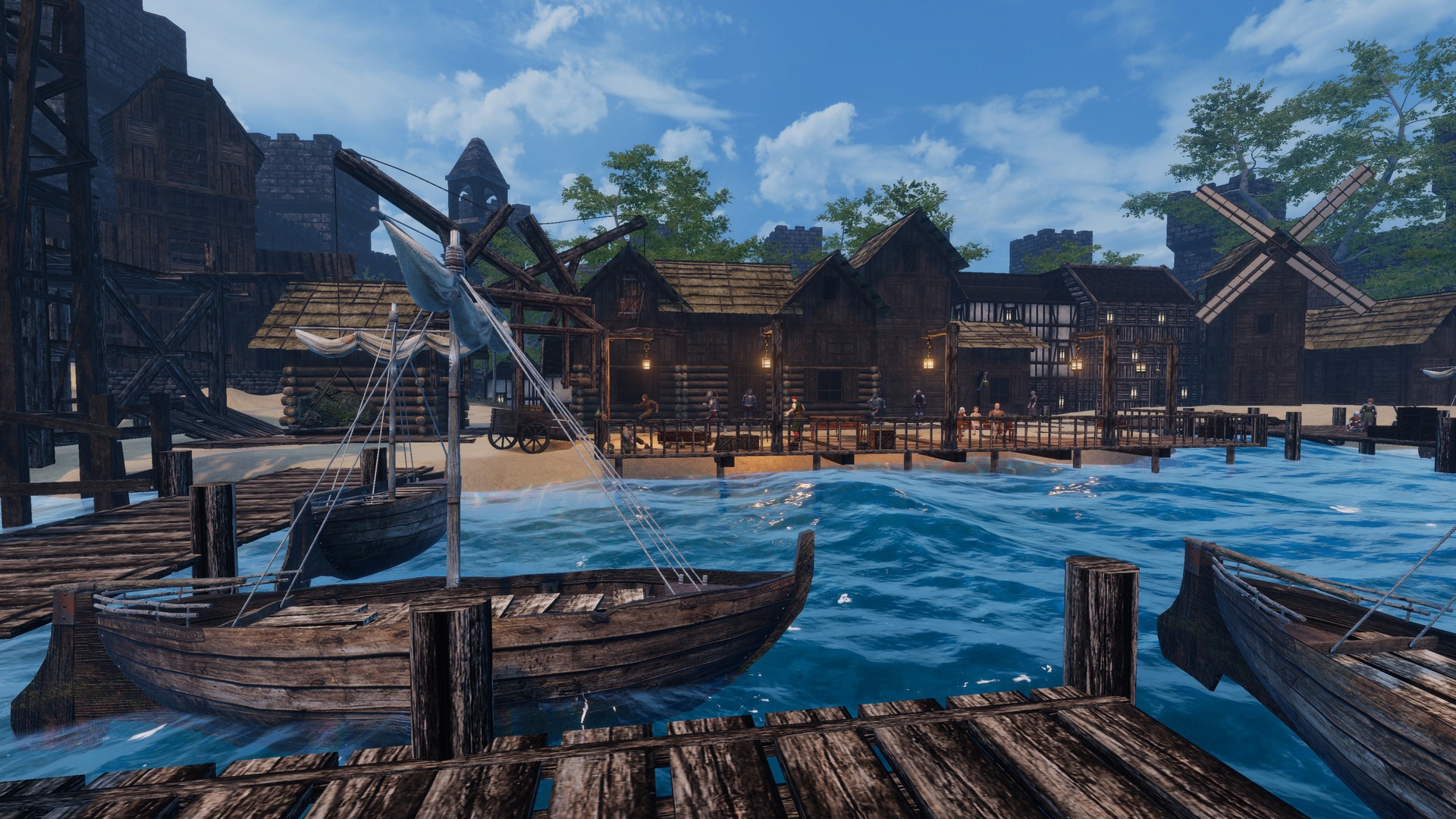 This is a publicity shot from the game’s store page, meant to lull you into a false sense of Bandit Simulator’s overall quality.

I was expecting Bandit Simulator to be one of the absurdist <NOUN> Simulator games that turn up on Steam occasionally, largely because I assumed that if someone was making a sincere attempt to develop an actual game, they’d know better than to call it Bandit Simulator. My assumption was wrong. Bandit Simulator has a story, a setting, and a cast of characters with whom you (as the titular bandit undergoing simulation) interact. It has minigames, side quests, dialogue options. It has genuine(ly terrible) stealth and combat mechanics. Pinocchio wanted to be a real boy, Bandit Simulator wants to be a real game.

You start out in a Medieval dungeon, having evidently simulated banditry and failed. Your cellmate—a master thief nicknamed Quickfingers (Lightfingers? Nimblefingers? I can’t remember. Something fingers)—laments that he’d have escaped already, but he can’t operate a lockpick because the guards broke his hands. You probably see where this is going. That’s right! To a tutorial. 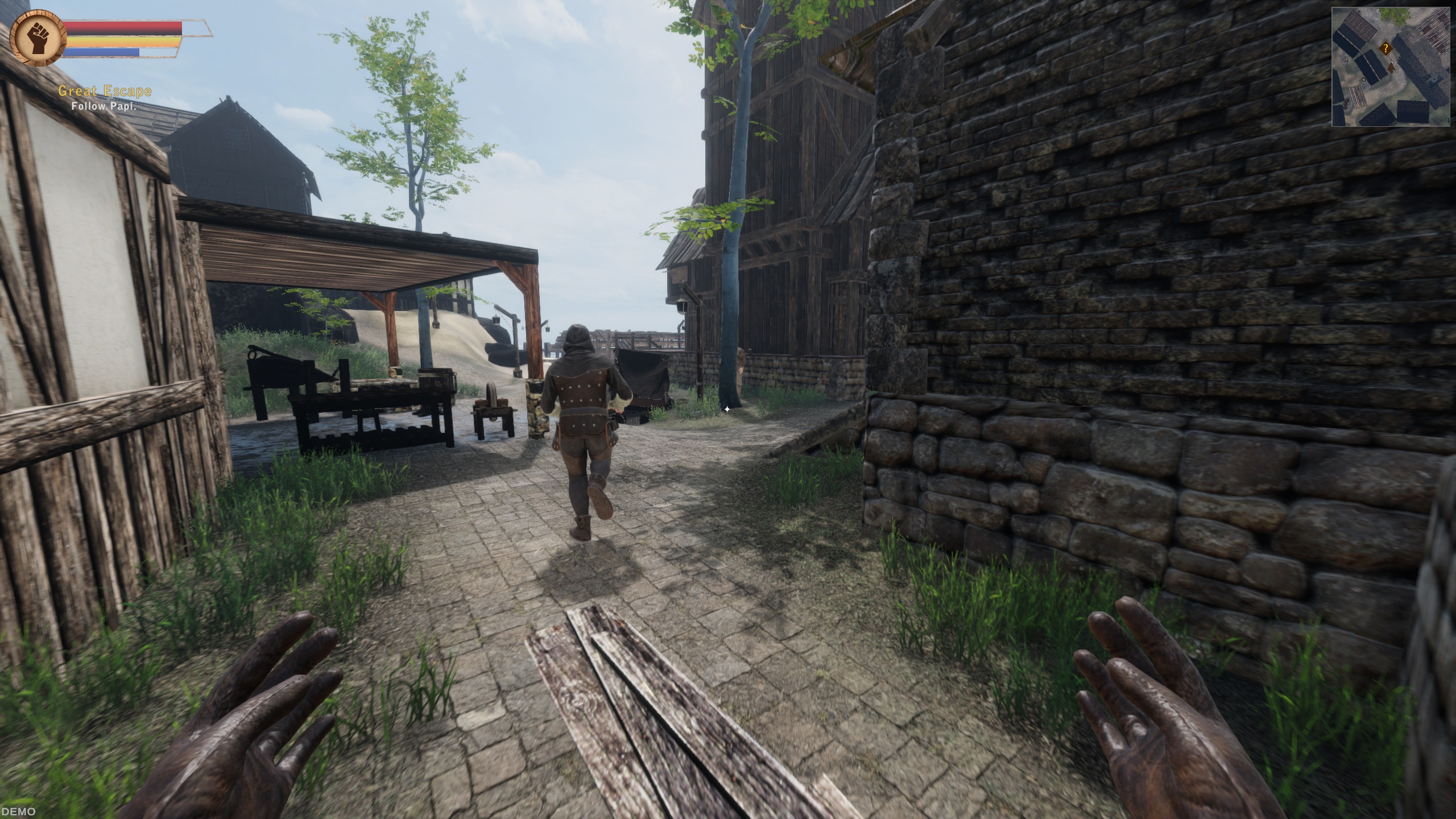 You’ll notice my character’s hands sticking out in most shots, like a gloved seal. Once you unholster them as a weapon, they won’t go back.

After playing through the demo, I’d conjured a mental image of one or two very young, very earnest developers with a large dream, a fresh download of Unity, a copy of Learn to Program C# in 21 Days, and no actual game design experience. Based on that, I resolved to not be too hard on the game. It would be easy to rip Bandit Simulator apart, but also needlessly cruel, if my assumption about the creators’ inexperience was accurate. The last thing I want is to discourage passionate, eager developers who are clearly trying and probably know they have a lot to learn.

Bandit Simulator’s store page promises a lot: big open world, multiple quest lines, a skill system. The demo is basically the tutorial and starter missions, maybe an hour or two of content during which you’re mostly trying to get out of town. Apparently the game doesn’t truly open up until after you manage that. Since the demo ends at the city gates, I can’t really judge the experience on its full merits, other than to say this game’s ambition is somewhat comical already. 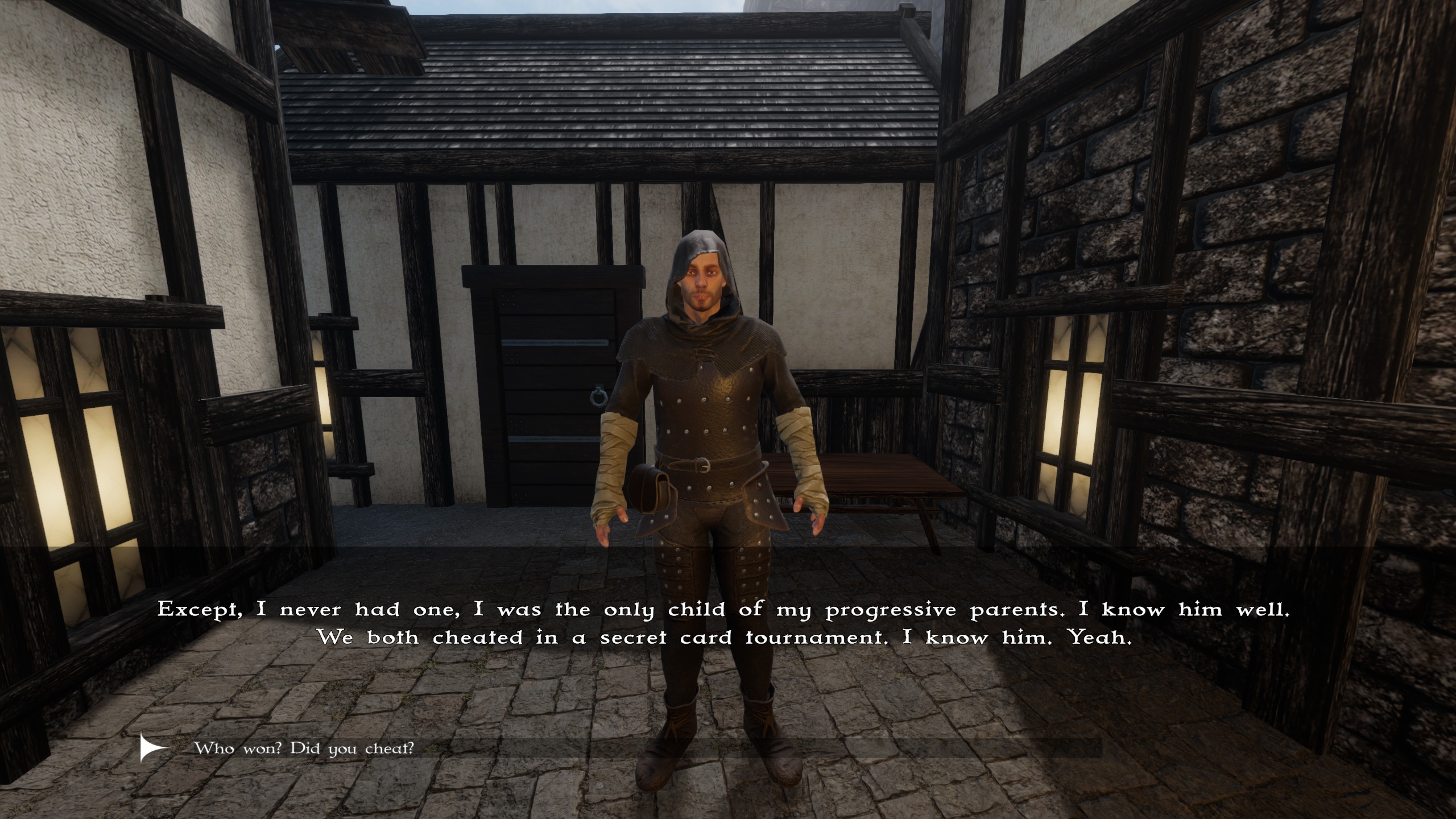 This guy is trying to convince you that you’re like a brother to him. Where the thing about progressive parents comes from, I don’t know.

A lot is comical, in fact. Sometimes on purpose: Bandit Simulator’s dialogue and object descriptions are surprisingly funny. This isn’t a game that takes itself too seriously. Other times the hilarity is less self-referential and more broken. Weightless combat, floaty controls, identical houses full of sleeping homeowners who slumber on unconcernedly as you steal literally every object they own. People in the street will attack if they catch you picking their pockets, but a single punch was usually enough to send enemies into low orbit. One time during a fistfight, my opponent’s arms vanished, which made him pretty easy to beat. And of course you can rob merchants and fence the stuff right back to them.

I could have just stopped playing, but I didn’t, which is why Bandit Simulator could be the greatest game ever made. The more you play, the less you care how unbelievably inept it is. It’s just so ludicrous, and you sense that on some level, the developers know that. Why else would they make NPCs and quest givers stand in place and frantically wave their arms in the air to get your attention? Why, if not to offer a nugget of comedy gold?

I made a gallery of them.

They appear to be the same game. It’s a puzzle, but I lost the will to dig deeper.

I kind of want it to be CreativeForge, because there’s a pretty interesting story about that studio. But I’m guessing it’s Titanite, since they’re the one listed on Steam, and developers (or their publishers) control a game’s store page. Also, CreativeForge doesn’t mention Bandit Simulator on its own website, while Titanite does, so let’s go with the likelier candidate.

Either way, it shatters the mental image of Bandit Simulator being created by some noob developer with bright eyes and big dreams. Neither company is impressive, but they both have catalogues. As such the appalling first person mechanics and core gameplay of Bandit Simulator are just bad, rather than “Oh, look how cute, that little boy is programming a video game.” 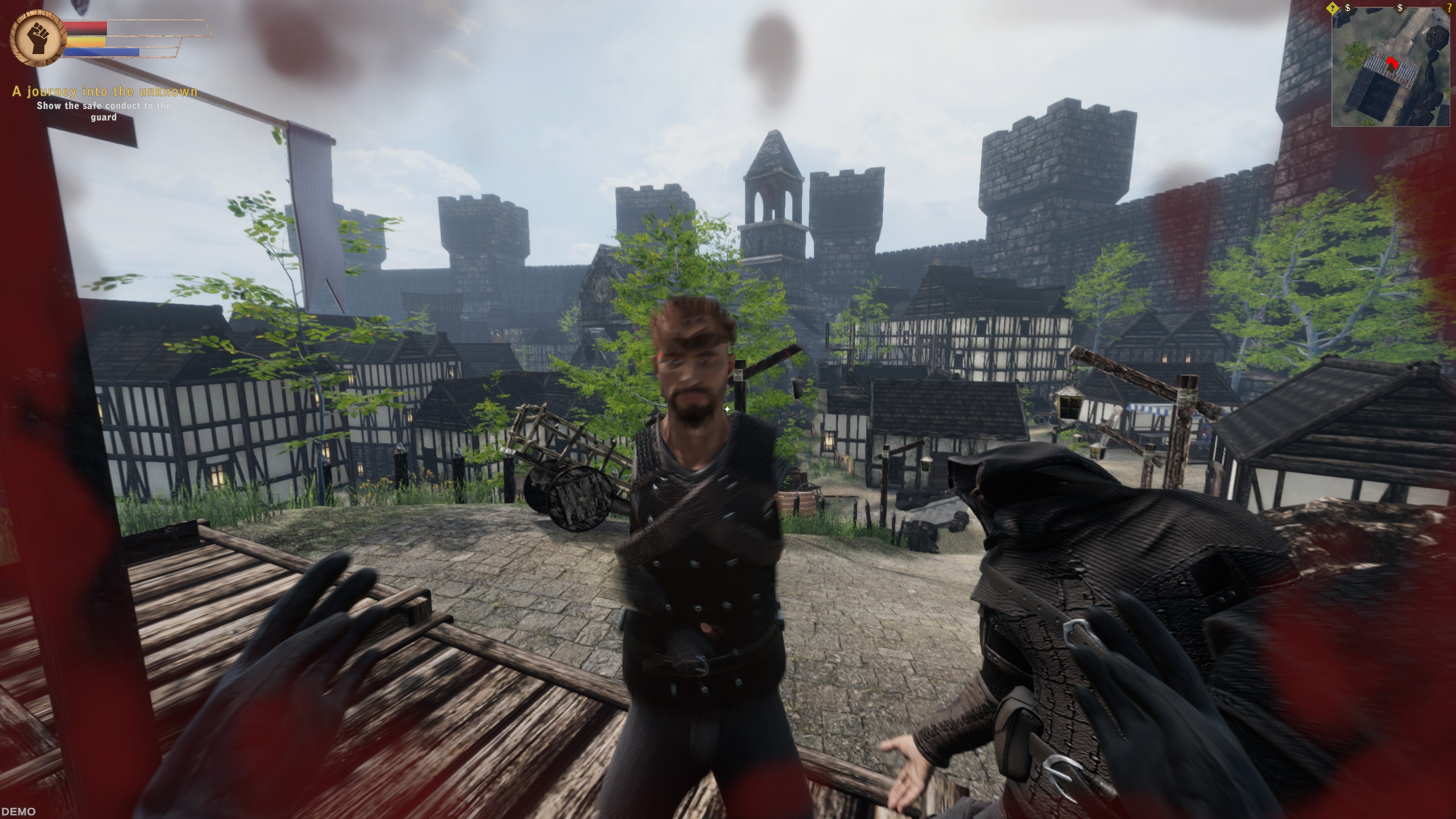 Here’s the guy whose arms disappeared. Sorry it’s blurry… he’d just punched me. Then his arms vanished, which made him less threatening overall.

Now that we’ve given bandits and the simulation thereof their due consideration, I’d like to expand upon some of my statements about Steerpike’s Dozen Days of Demo. This should hopefully clarify why Bandit Simulator is being discussed at all.

The truth: I didn’t choose demos entirely at random, nor did I have any particular plan. I scrolled down the list and picked some. For the most part, the decision was a knee-jerk reaction, with special attention given to titles or descriptions that made a game seem especially interesting or hilariously bad.

I’ll leave it to you to decide which one I thought Bandit Simulator would be.

Bandit Simulator is developed by Titanite Games or CreativeForge, depending on which part of the internet you’re reading. It’s published by Glob Games Studio, or CreativeForge, or PlayWay. Some combination of these is correct. Which? Don’t ask me, I only work here.