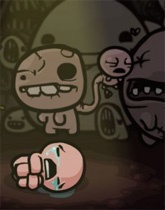 “The Binding of Isaac is fully saturated with gameplay. If players can get past the grotesque art style and abrasive story, both of which are pretty much irrelevant to the actual game, they will find dozens of hours of intense, fresh play for less than the cost of a latte.”

The Binding of Isaac is an arcade-style game currently available on the Steam platform.  The controls and basic gameplay are found somewhere in the old school Smash T.V. and older school Zelda, yet it takes much of its design from the ancient school of roguelikes. It sounds like the developer put salami, bananas, eggs, and Worcestershire sauce in a blender, but the result is a beautiful thing. I personally can’t stop playing it.

Our hero is a toddler that escapes to the basement (i.e., Pit of Decay and Despair) before his mother sacrifices his life to god. Using his tears as weapons against the evil below, the toddler grows in power to eventually come back and kill his mother. It’s about as much story as is needed for a game oozing with delicious gameplay.

There is so much to like about this game. The control are very simple. WASD moves our lil’ bugger and the arrow keys shoot tears in the cardinal directions. Players can move diagonally, but they cannot shoot diagonally. This is “fixed” because players can shoot curveballs, basically, by moving in one direction and shooting perpendicular to that movement direction. This lets players basically shoot around wide corners. There are also bomb, power, and item buttons, and that’s about it. Like the developer’s prior, Super Meat Boy, the controls are insanely responsive and simple.

Each level of the dungeon is procedurally generated with a few basic rules: there is a boss, a treasure, and a secret. Everything else is up for grabs. Monsters get tougher and different as Isaac delves deeper into the dungeon, and once in awhile one of the monsters will become rarer. After the boss is beaten the next dungeon level opens up, but Isaac cannot return to prior dungeon levels once he drops through the trapdoor. I’ve read that as a player progresses in the meta-game by getting more wins, items, etc. the procedural generator will open up to make the game harder and crazier. Since I can’t even beat Mom yet, I seem to be mostly in noob mode. Still it gives players something to work for.

Along the way Isaac can gather three commodities and a bunch of other items and powers. The commodities are pennies (and nickels!), bombs, and keys. Pennies buy things from the merchants and can be used to gamble in the arcade rooms. Bombs hurt things, like enemies and rock formations, and they are also used to find the hidden entrance to the secret room. Keys open locks. Sometimes treasure chests and doors will have locks. Many a level have I spent praying I would find one more key because like a roguelike, The Binding of Isaac squeezes players on commodities.

Items and powers are the special moves. Items are one-off, and I’ve seen pills and tarot cards. Pills effects are completely random in that when I pick up a red-colored pill, I won’t know what it does. Once I swallow it and understand its effect, then all future red-colored pills will have that same effect. Tarot cards are basically the spells of the game, but I don’t think they are random. When I pick up a pill its name is “???”, but when I pick up a tarot card it has a name like IV The Emperor (this will teleport me to the boss room). Both can be pretty powerful, but they can also harm Isaac. Powers are only helpful. They charge up based on clearing a room full of monsters, and until Isaac replaces the power with a different one, it can be used again and again.

Basically what this potpourri of mechanics comes down to is a fresh experience every time. One run through I might fight easy bosses and get mundane power ups like “attack up.” Another run might net me more difficult bosses, but then I have homing, piercing tears and I can fly. I, as a player, have to adjust each time. If I have 20 bombs then I can go crazy throwing them at enemies. If I have 2 bombs, I want to save them for secrets and chests surrounded by rock. Any roguelike fan that has wasted away hundreds of hours in to the genre will instantly see how The Binding of Isaac has used this same system.

I personally can’t stop playing because of it. If I die, most of the time I see how it is my fault. I read the little farewell to the world note left by the dead-or-dying Isaac, and then gleefully press replay (regardless of time in the night) to see what the next run’s game will become. Sacrifices are made to the necessary deities in the hopes that I will get piercing tears this run.

I hate to be that reviewer, but there is nothing “bad” about this game. I bought it for less than $5, which will barely buy me a McDonald’s meal anymore. Yet, it’s price does not wash away any flaws because I simply cannot find any. I have not seen any bugs. The gameplay is rock solid, and it’s some of the most fun I’ve had with a PC game.

There are two bad-ish things with playing the game that are not necessarily of fault. First, it’s insanely intense. I decided to do a few more runs before bed and my adrenaline was so amped that I couldn’t fall asleep for a few hours as globs of blood and tears were shot across the back of my eyelids. Second, the RNG can really suck. Some runs are made for Isaac’s death. When I get a pill that hurts me, relatively no commodity items, and things are not going my way, I figure it’s a wash. Yet, the beauty of it is now I want to see how far I can go with slow, low-range, boomerang tears and 2 hearts of health because I never know how quickly my luck can turn around. Half the game is just playing and exploring, and the other half being the intent to beat Mom.

Here’s where we go all subjective on this game. The story and art are abrasive and crude. Instead of the Zelda bushes to find rupees, Isaac is flinging his never-ending stream of tears at piles of poop in the hopes that there is a penny inside. Maggots and disease are everywhere.  I find a hanger, and stick it through my head to increase my tear output, and then I jab myself with a dirty needle to give anybody poison that touches me. By the end of the run I look like a Frankenstein of freakish upgrades.

Images of my fat trailer-park mom in her bra stops all the monsters in the room. A dead cat gives me nine lives, where before I had no extra lives. My mom’s maxi-pad is an item. And to top it all off, one pill makes me fart once with a deadly area-of-effect attack.

Anybody familiar with Super Meat Boy’s style and humor shouldn’t really be affected by The Binding of Isaac’s. It’s crude, but it can be ignored. Piles of poop are just destructibles with treasure. A hanger through my head is just a statistical upgrade. Yet, fair warning to sensitive gamers: it is an ugly game.

And, I keep playing. I curse the RNG, but I know that the death was because I stepped in to a bullet stream. I’ve only been stomped on by Mom’s fat leg once because I can’t seem to get past the Monstro II boss. I used to not be able to get past the first Monstro, and now I can kill him without any personal heart loss. I know that if I do a few more runs, I’ll hit a sweet spot between RNG love and skill. Maybe then I can kill Mom.

Email the author of this review at ravious@tap-repeatedly.com.

Website: Steam Forums or The Binding of Isaac Wiki (Unofficial)

15 Responses to The Binding of Isaac