This is Telltale throwing us a bone – a nice meaty bone with some good stuff on it – and hey, I can think of worse things to do with five bucks.

Telltale Games returns, if only briefly for now, to the world of Robert Kirkman’s The Walking Dead to whet your whistle for the to-be-released second season of their award-winning game.  If you lived under a rock last year, you might not know that Telltale’s game adaptation of the comic – which told an all-new story of the zombie apocalypse – reminded everyone how damn powerful interactive storytelling can be, especially without being weighed down by half-baked RPG/shooter elements.  The game brought Telltale enough awards to erect an effective barricade around their offices to weather the undead onslaught. 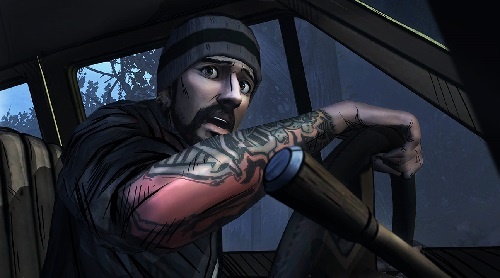 Yes, I just insulted Mass Effect. What of it?

Although Season 2 is on the horizon, those who can’t wait can drop a few bucks on the new DLC, 400 Days, and partake in five short stories about survivors in The Walking Dead‘s world.  This is not a return to the characters from the first season, instead introducing five new survivors to feature in their own vignettes.  These stories can be played in any order, and take place at various points in the first 400 days (imagine that) of the apocalypse.  They intersect in small ways with the first season (and some of your choices there will be reflected here, if only in the odd line of dialogue or decaying corpse of someone you failed to save) as well as with each other.

The new characters run the gamut and are as effectively written as any from the game proper, with each episode striking its own tone and posing its own dilemma.  There’s Vince, a convicted felon who finds himself caught on a prison bus as the apocalypse hits; Wyatt, a stoner surviving with his stoner friend Eddie; Russell, a young man who chose to separate himself from the group he’d been with; Bonnie, a recovering addict caught in the middle of the marriage troubles of her companions; and Shel, who is trying to protect her teenage sister Becca from the harsher realities of the new world.  None of these characters feel particularly like a weak link, though each is different enough you’ll probably have a favorite or two.  I’d be happy to spend more time with them (or most of their supporting cast) if they make appearances in Season 2.

With the exception of a couple minor new gameplay bits, 400 Days continues doing what Season 1 did.  Inventory puzzles are left behind completely, though, possibly to limit the number of areas players need to wander around and explore – there are relatively few here, with each story being ultimately highly linear.  That works out fine, though, because the narrative was always what the game did best, and while they last each story moves along briskly.  Each culminates in an all-important decision that lives may depend on, and there are some consistent themes that run through each story and build toward the DLC’s own climax that follows the separate chapters. 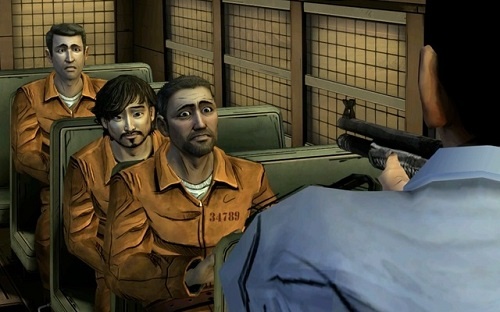 The “while they last” is the sticking point, though.  All told, the game took me about an hour and a half to complete, and that was with taking advantage of the handful of opportunities I had to explore and engage in optional conversations.  Some people will be very disappointed with this amount of content on principle; for the modest price I paid ($5 on Steam) I felt like the quality of the content made the purchase very worthwhile.  I mean, I could pay double that to go to a movie of similar length that I’d probably have enjoyed less.  But it’s probably unfair to compare the price of anything to movies these days.

The bottom line is, if you liked The Walking Dead proper, 400 Days is a nice little chunk of storyplay that can kill an evening (hopefully without having it reanimate and try to eat you) and alternately help you wait out the lean months until Season 2 and make you desire it even more.  If the blink-and-you’ll-miss-it length gives you pause, maybe just wait for a sale or something.  This is Telltale throwing us a bone – a nice meaty bone with some good stuff on it – and hey, I can think of worse things to do with five bucks.

2 Responses to The Walking Dead: 400 Days