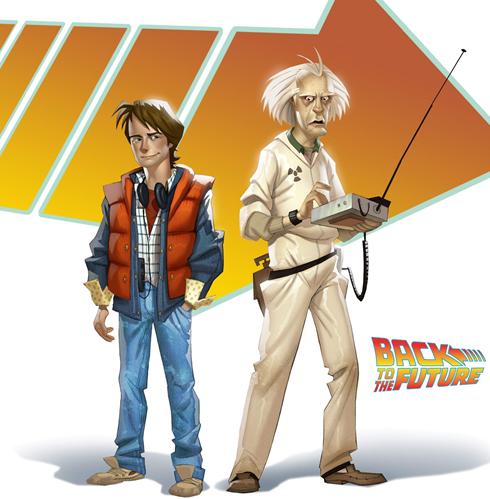 Telltale’s recently-completed episodic adventure proves nothing less than a love letter to the most charming sci-fi trilogy ever made.

Tell Me, Doctor, Where Are We Going This Time?

If you are an individual of impeccable taste, then I hardly need to tell you all the things that make the three Back to the Future films great.  Increasingly, it seems like they’re the only classic 1980s adventure films that haven’t gotten one or more unnecessary sequels in the last decade.  But that doesn’t mean that it’s quirky world and characters don’t still have plenty of unharnessed potential.  Let’s just be thankful that the inevitable continuation of the license was handled by the likes of Telltale Games.

Like most of Telltale’s releases, Back to the Future: The Game is actually five episodic installments, released about a month apart, but these episodes form a cohesive story (complete with cliffhangers at the end of each episode, a la the conclusions of the first two films) that make it hard to jump straight into the middle.  Playing all the episodes together produces a roughly ten hour puzzle adventure full of enough charm and nostalgia to excuse some of its blemishes – and since they’ve all been released now, you can play the whole game without waiting between episodes.

The first episode, “It’s About Time”, kicks off a few months after the end of the films.  It’s 1986, and Marty’s life has once again returned to a comfortable, if unremarkable, rhythm without Doc Brown around to get him into crazy adventures.  But Marty misses his friend, and worse, the bank is foreclosing on Doc’s house.  Marty’s father is handling the estate sale, so Marty rushes next door to try to save any particularly important items. 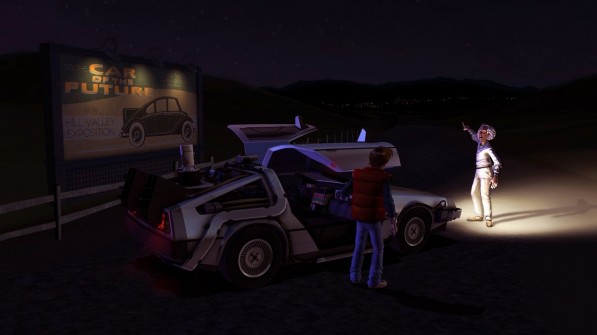 Say what you will about the character designs, but the DeLorean looks great.

This is all just the beginning, though: the usual introduction to the game’s interface (which is nothing new or different for puzzle adventure veterans) and an opportunity to get in a few nods to the movies in the form of lots of recognizable props: the Hill Valley model Doc and Marty used to plan Marty’s way back to the future in 1955, the enormous speakers Marty nearly knocked himself through the wall with at the very beginning of the first movie, and so on.  It’s also a good time to get used to the art style, which I find just a tad awkward for Back to the Future, and Marty’s voice actor, A.J. LoCascio, who does a pretty good Michael J. Fox circa 1985.

But things get heavy when a driverless DeLorean shows up in the driveway with only a handful of clues to what’s become of Doc.  And so begins another timeline-hopping adventure in the most awesome time machine, well, ever.

You Better Promise Me I’ll Be Back in Time

The series kicks off well enough, with the right touches to call back to the films without feeling completely reliant on them, and before long Marty has zooms off (at 88 miles per hour) to 1931.  Most of the series pops between the Hill Valley of 1931 (albeit with a small amount of time passing on occasion) and several alternate future Hill Valleys of 1986 created by some action in the past.  Setting everything right will take Marty the whole of the series as time twists and turns, and a lot of what happens is just the right kind of fun paradoxes-may-care sort of time travel that make the movies so entertaining.  Yes, there’s plenty of times that the time travel logic will start to crack if you think on it too hard, but really, if you are, you’re probably playing the wrong game.

As you might expect, Telltale reuses a lot of locations and characters throughout the game; that’s just part of the consequence of a monthly release schedule.  The technique works better here than it does in, say, Sam & Max, though, since many times the settings and characters are slightly tweaked to reflect an alternate timeline.  Marty spends a lot of time running around Hill Valley’s town square, but it’s often a different Hill Valley’s town square. 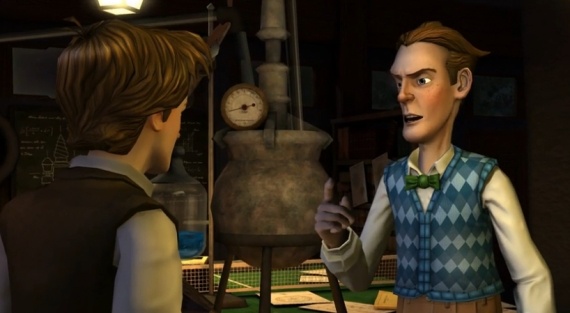 Doc’s teenage self is also a regular character throughout the game.

Unfortunately, the early portions of the game – part of the first episode and a good deal of the second – are a bit slow as Telltale gets their rhythm down.  And, yes, as often happens with Telltale’s designs, a lot of the puzzles aren’t very hard.  But Telltale’s usual strengths are on full display here: the story is fun and the dialogue often pitch-perfect, with a capable voice cast behind the characters.  That cast includes Christopher Lloyd as Doc, and Claudia Wells also returning as Marty’s girlfriend, Jennifer Parker.  Michael J. Fox himself makes a voice cameo in the last episode.  Telltale also had help from Bob Gale, the films’ co-creator, to craft the story, which aside from the usual time-twisting, lightning-striking, Tannen-humiliating antics, digs into Doc Brown’s past, among other things.  This makes for not only a fun adventure story but some really interesting character drama for Doc and Marty alike, and the later episodes especially have some scenes that really make this pay off.

Of course, Back to the Future: The Game is an adaptation, essentially, and while Telltale took great pains to be respectful to the films (and are clearly fans of the films themselves), they’ve also brought their own brand of humor and storytelling to the games.  The result is that you can tell that the tone has changed a bit, which is to be expected twenty years after the fact, I suppose.  But it’s close.  I sometimes wonder if the game development environment is, by nature, unable to exploit the sort of perfect-storm chemistry between various cast and crew that the best films seem to, that Back to the Future certainly did…but I digress.

Back to the Future: The Game probably isn’t going to become a genre classic – it’s too easy and not nearly innovative enough for that, even if it does have some cool climactic sequences involving moving vehicles and Mr. Fusion.  It’s a game by fans, for fans, and one that gets the important parts of such a game very, very right.

Back to the Future: The Game is, on the face of it, much like Telltale’s other adventure outings – Sam & Max, but a lot less twisted.  But Telltale has taken on the monumental task of adapting some of science fiction’s most beloved film characters and sending them on a new adventure, and in that, Back to the Future: The Game is very nearly all we could hope for.  It’s chock full of the kind of witty writing that made the movies such a pleasure, character cameos, nods, and homages to the films, while still standing very much on its own.  As I played it on the episode release schedule, the episode cliffhangers always left me wanting more, and despite a few pacing and design missteps, Telltale delivered where it was important: the game’s heart and soul. 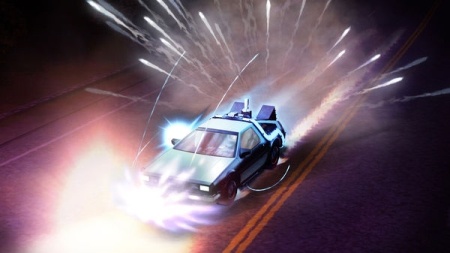 If that doesn’t get you all teary-eyed from nostalgia, nothing will.

Which sounds really sappy, I know.  I watched the film trilogy again back to back in preparation for the series, and I was reminded of just the sort of magic that these movies brought to theaters back in the 1980s.  At the best of times, Back to the Future: The Game brings a glimmer of that magic to your gaming device of choice, and everything that goes along with that.

5 Responses to Back to the Future: The Game