I hate the environment. It’s where Nature comes from, and Nature is the worst. Seriously, Nature will sting you (with wasps and scorpions), burn you (with lava and the sun), eat you (with sharks and bears), break you (with rocks and rolling logs), and cut you (with claws and other, sharper rocks). List goes on.

Look, we went to a lot of trouble to stop being gorillas, and we did it to get away from the environment. Birds and meerkats and stuff, they chose not to evolve. Human beings said, “the environment is being kind of a dick with the rain and the tapeworms; let’s invent ‘Inside.’”

The price of Inside was a hundred thousand years of miserable self-awareness. Air conditioning? Hot Pockets? Insect repellent? We bought those things, my friends. And by God, we paid for them.

I don’t know why we kept the environment at all. Far as I can tell there’s no reason to have it any more. What does it do? Nothing, except sit there being gross and dangerous. Take food, for example. Food from the environment is horrifying. Did you know that meat used to be kept inside animals, where the eyeballs and feathers are? It used to have blood in it, for God’s sake. Plants were grown in “soil” (which is another word for “dirt”) and fertilized with poo. When the environment is in charge, food is veins, entrails, brain-devouring parasites, and small, misshapen tomatoes. When people are in charge, you get standalone food units: genetically engineered, stuffed with antibiotics, irradiated, laser-inscribed, wrapped in plastic, frozen into convenient bricks, and artfully arranged in rows. Food comes from stores, which are antiseptic and brightly lit with mercury-laced fluorescent bulbs as God intended. We no longer have to deal with botulism or tendons.

Don’t say “nature does it better.” Nature didn’t give us the Honeycrisp™ apple. In nature, onions live underground, like trolls. People onions are size of garden sheds and adorned with colorful barcode stickers. The environment is dumb, but even though humanity clearly won the war, it’s decided to kill us all. So to appease it, we have to stop cutting off rhinoceros horns and keep our microplastics in a place that isn’t the ocean.

The first of Steerpike’s Dozen Days of Demo saw me sacrifice myself on the altar of Terra Nil, the upcoming sophomore effort from Broforce developer Free Lives. 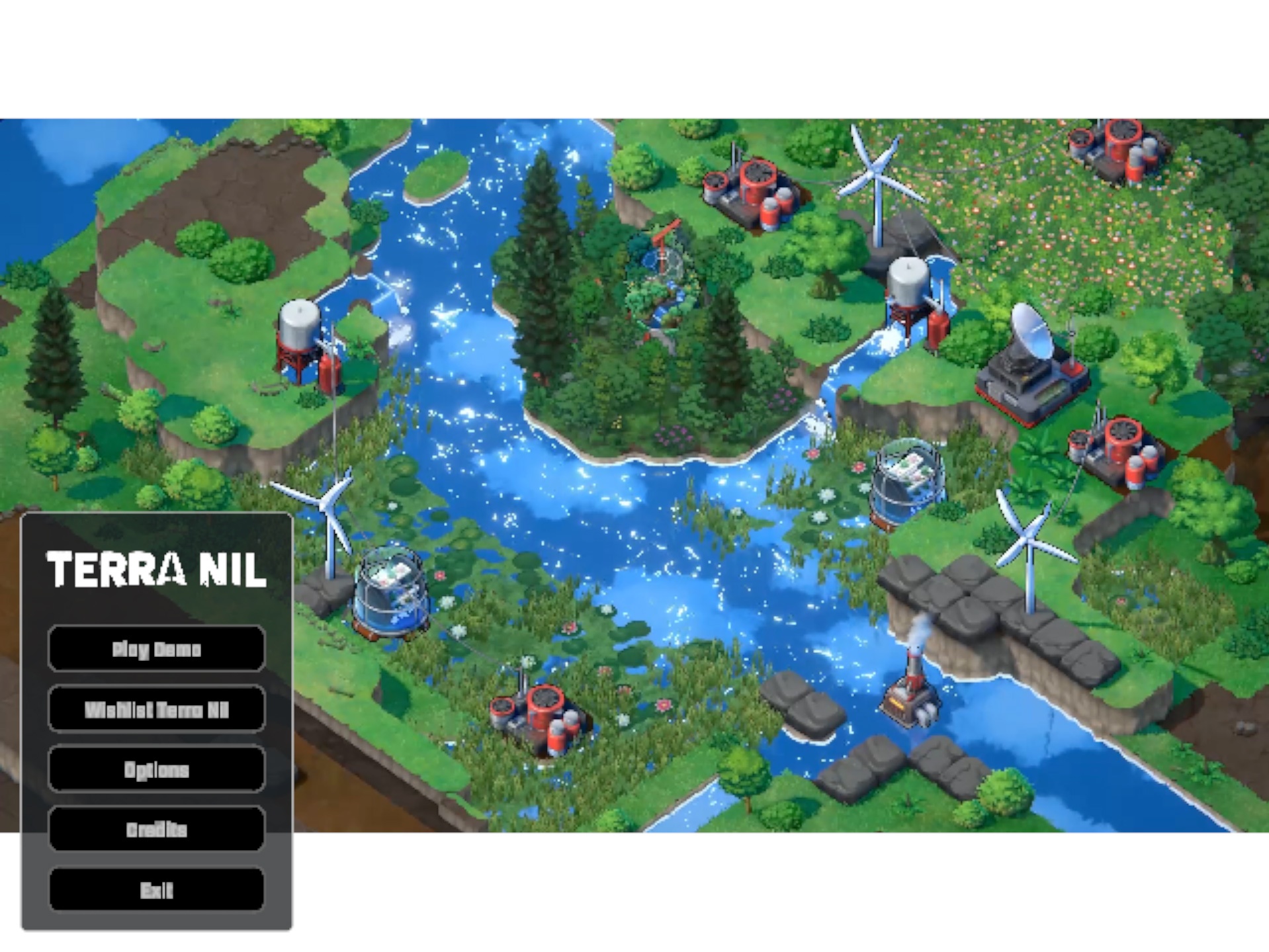 Its creators call Terra Nil a “reverse city builder,” which is good to lure players in: you’re handed a small, procedurally-generated tract of wasteland utterly annihilated by environmental abuse. I’m talking lifeless moonscape levels of ruin. Your job is to make it bloom again, which you do by putting in structures that rewind the damage. In a regular city builder, you’re chopping trees down and evicting frogs to make room for apartments. Here, you’re trying to coax frogs and trees back.

As you play, however, you quickly realize that Terra Nil is more puzzle game than city builder. During the 30 minutes or so a game lasts, you progress (or try to) through three discrete phases, each unlocking a new objective and new technologies with which to achieve it. You could conceivably fail pretty early on, but it’d take some effort; more often you’ll run out of resources (which appear to be leaves) near the end of the game, when you’re trying to tidy up and exit the newly pristine land. 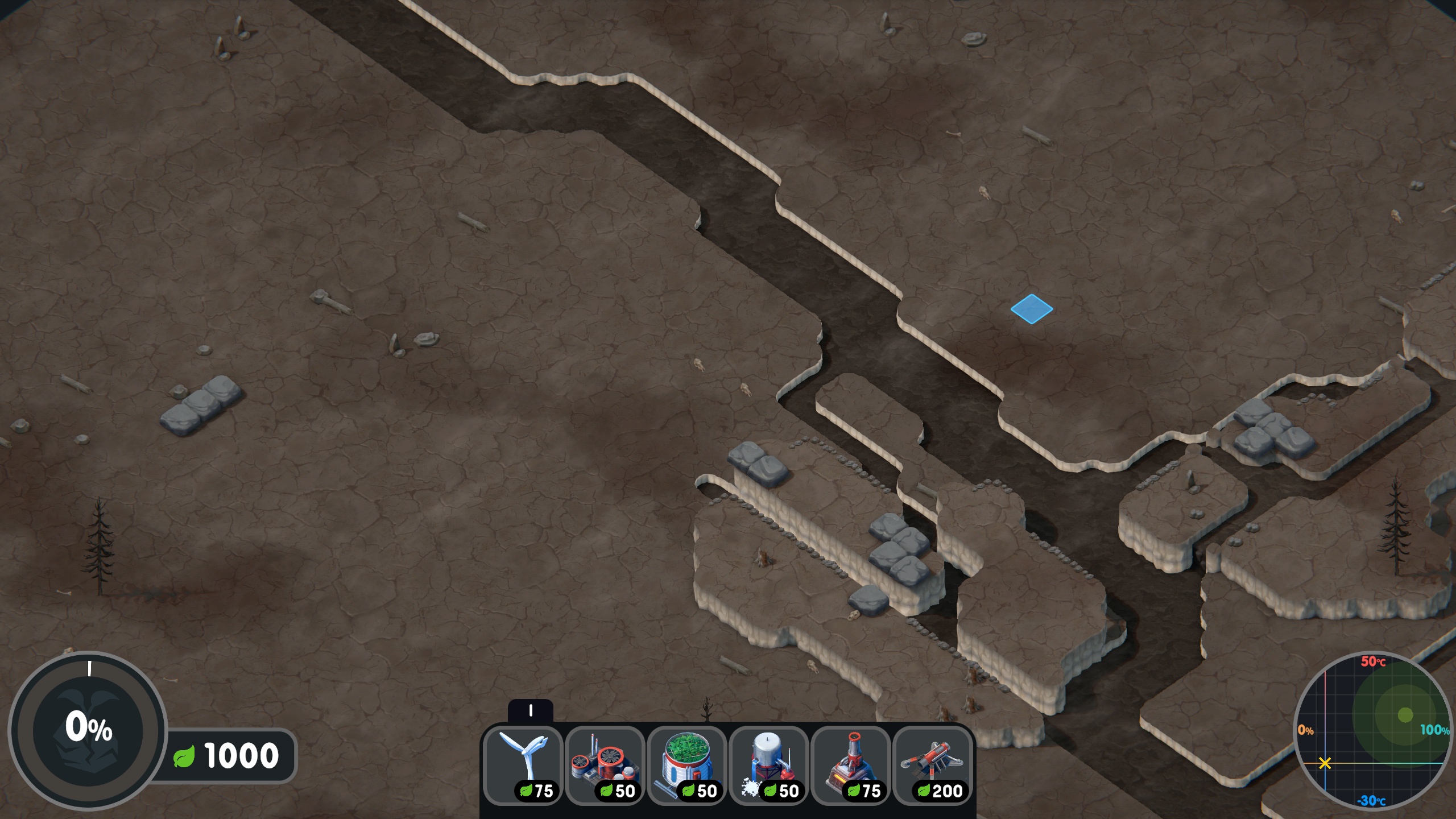 This land is my land.

City builders are about efficiency—efficient layout, efficient expenditures, efficient progress. Terra Nil is more chaotic, rather like the environment itself. Symmetry and optimal land usage are right out in this game, which is unsettling at first, but you soon get used to it, and once you do, that’s when the real strategy element becomes clear. Sometimes you have to destroy to rebuild. Sometimes you need to waste a lot to accomplish a little, though you shouldn’t make a habit of that.

Balance mechanisms are quite clever overall. In the first phase it’s all about cleaning the dirt and putting in grass. The true heart of the game is its second act, when you’re trying to diversify the landscape by meeting specific biome quotas. But wetlands don’t wet themselves. Flowers don’t pollinate themselves. Trees don’t fertilize themselves. If you’re not careful, every step you take toward expanding one type of biodensity turns into a step away from the other two.

Plus, it’s hard to pull the trigger on some projects, even when you know it’s the right play. You need to carry out controlled burns to encourage forest growth, for example. But “burn” and “controlled” don’t always play nice with each other. So this happens: 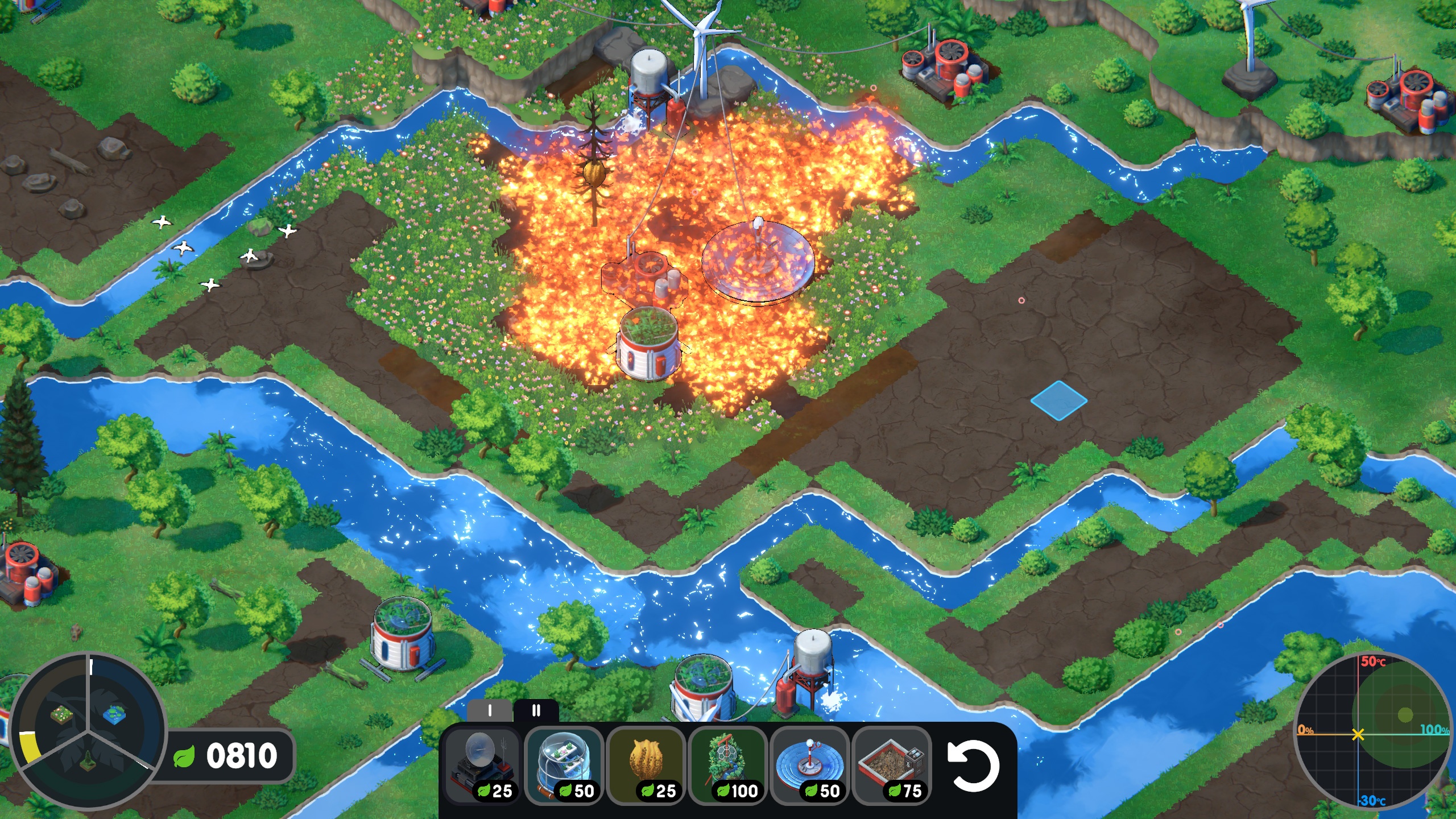 I’d burned down like half the map before it finally fizzled out. Fortunately, I hate nature—perhaps I mentioned this elsewhere.

But eventually Terra Nil is satisfied that you’ve put in enough Festering Mud (“wetland”), Pre-Paper (“forest”), and Things That Won’t Grow Without Beehives (“flowers”), and it promotes you to the third and final tier of the game, when your principal task is to tear everything down and leave, so the nature can creep around unfettered. The bite-sized structure is pretty clever.

It’s also pretty shallow. Overall I came away with a basically positive opinion of Terra Nil but no desire to buy it, which speaks to an endemic problem with game demos in general: did they lose a customer in me, or did they break even since I’d never intended to purchase?

Hard to say. Certainly the Terra Nil demo makes some missteps. The game itself feels pretty close to done, but is at times capricious and arbitrary, and I have no way of knowing if that’s pre-release roughness or baked into the product. The biggest issue is it’s unclear what exactly the demo is. How much of the game have I already seen? You’re not shown any indication that there’s more to it at all, and if that’s the case, then Terra Nil would qualify as a five dollar purchase at best. 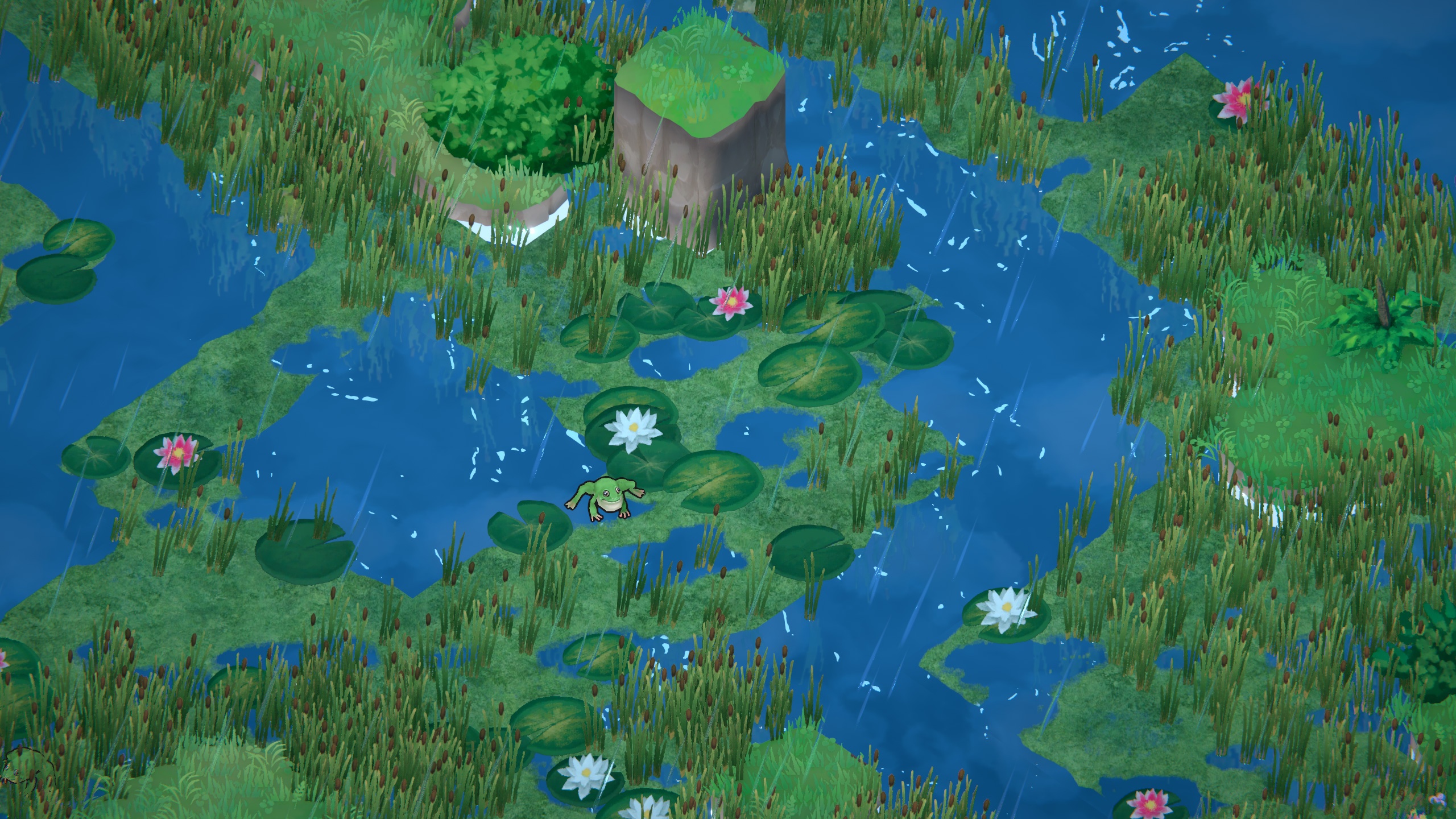 FROG! Seriously, what the fuck, Nature? Do you make anything that’s not repulsive?

Meanwhile, if there is a lot more to it—more game phases, more complex interactions between elements, more biomes, more landscape features—it could have potential. But since the game didn’t tell me what else (if anything) to expect, I don’t know, and the cynic in me assumes the worst.

Finally, I had a philosophical issue with the game. It sounds weird to say, but I felt like Terra Nil didn’t care that much. It simplifies the massive, existential challenge of undoing millennia of environmental damage to such a degree that it cheapens itself and minimizes the urgency. Nature’s collapse will be fixed by Technology: loose, ill-defined “Machines” that “Unpollute.” It’s not like I wanted the game to be preachy or anything, but at the end of the day, the message I took from it was click here to fix the environment. There’s no weight, no investment, and no sense of catastrophe or ruin. This is the polar opposite of Fate of the World, a game that shows you in soul-annihilatingly stark terms just how difficult the next hundred years are going to be.

It isn’t trying to be Fate of the World—I get that—but the demo didn’t tell me what it is, either.

Terra Nil will be published by Devolver Digital at an undisclosed point in the future. At present, it’s available for wishlisting on Steam. It also has a demo that may or may not remain available after Next Fest comes to a close.