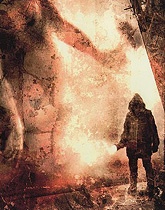 “Penumbra: Black Plague punches well above its weight and while the progression of the story may not be to everybody’s liking, it’s such an unpredictable, frightening and exuberant thrill ride that I’d be hard pressed not to give my heartiest recommendation.”

Black Plague is a pain to talk about without revealing some of the more interesting aspects of the game so you’ll have to excuse the number of spoiler tags littered throughout this review. The spoilers are there for those who’ve played the game already, those who don’t care, and for the scaredy cats who’ll never play it anyway. You know who you are. [Me. —S].

The slow burning intrigue of Penumbra: Overture was one of the game’s crowning achievements and despite it being eight long months since I concluded the first episode of Frictional Games’ underrated horror series I, much like our intrepid nutter Philip, was eager to find out what the hell was going on down those God-forsaken mines. My only concern with Black Plague was that the whole thing would come crashing down should the game try to explain the very mystery that made Penumbra: Overture so compelling. 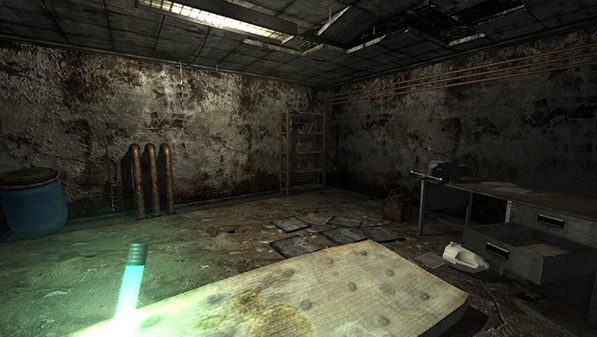 This is Black Plague’s idea of a warm welcome.

Much remains from the first game: the oppressive atmosphere, the sullen environments and dramatic lighting, the horrific sound design and pitch perfect music, the weighty physics are back with a clunk and so too is the tactile mouse interaction synonymous with the series. Perhaps the most notable difference between Black Plague and its predecessor is the lock, stock and barrel abandonment of combat, something players may be more familiar with in Amnesia: The Dark Descent, Frictional Games’ widely praised recent release. In real terms, gutting the game of combat makes no sense considering the extreme circumstances and the number of potential improvised weapons there are lying around but in game design terms it’s a bold decision that works brilliantly. The limited empowerment offered to players in Overture was at times enough to totally undermine certain enemy encounters.

Combat spoiler from Overture: when viciously bopping dogs with an ice pick lost its magic I adopted the tried and true method of puncturing pressurised canisters and hurling them like improvised grenades. In one particular area it was possible to lure dogs into steam chambers of doom using beef jerky but this proved far more difficult than simply bludgeoning them to death or detonating their canine butts. End spoiler.

In Black Plague you’re entirely defenceless and all this confrontational nonsense has now gone. Short of hysterically flinging the nearest object at a pursuer you have the unpleasant choice of hiding (without looking at enemies thanks to the panic element remaining intact from Overture) or running like Forrest. Or hiding then running like Forrest. Your vulnerability is now more apparent than ever and it’s telling that I can clearly remember every enemy encounter in Black Plague simply because each one felt like a major threat rather than a minor inconvenience. The whole experience feels tighter, more focused and all the more terrifying for it.

Scare spoiler: interestingly, certain enemies use torches to search for you so you can kiss that dark safe corner of yours goodbye. I found this out the hard way and after a few moments ohfucking around a room while some gangling figure scratched and scraped at me, I found the door and bolted down the dark corridor outside. As I made my escape I noticed the walls suspiciously lighting up around me — the emaciated torch-wielding fuck was catching me up. I turned around, cried, and seconds later died. End spoiler. 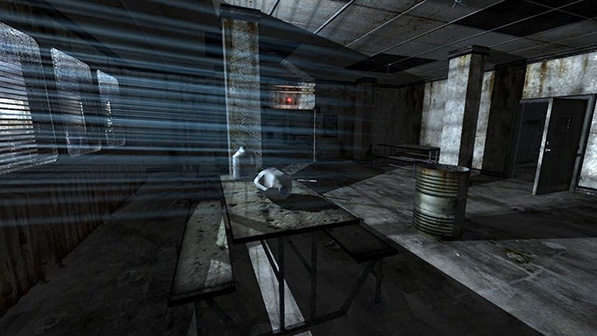 The puzzles in Black Plague, just like its predecessor are naturalistic and more often than not have fairly obvious logical solutions. What’s refreshing here however, is that a number of puzzles have a couple of solutions. Later on in the game some appeared to have elaborate and potentially laborious solutions — solutions which were entirely possible — but with a little vigilance it was possible to discern a much simpler workaround. This two tier approach to puzzle solving makes the experience far more engaging than simply trying to second-guess the one solution the developer had in mind.

Puzzle spoiler: very early on in the game you reach an impasse in a ventilation shaft due to a broken pipe spraying out freezing cold coolant. In order to stop this deadly spray of death you have to cool down a thermostat inside a warm door-less freezer. I didn’t have a clue how to cool it down and after a lot of pissing about I decided to cut the crap and drag an unwieldy 10kg sack of Stuff™ up into the shaft, wedge it against the leak and squeeze past. I knew it wasn’t the intended solution but it worked perfectly. End spoiler. 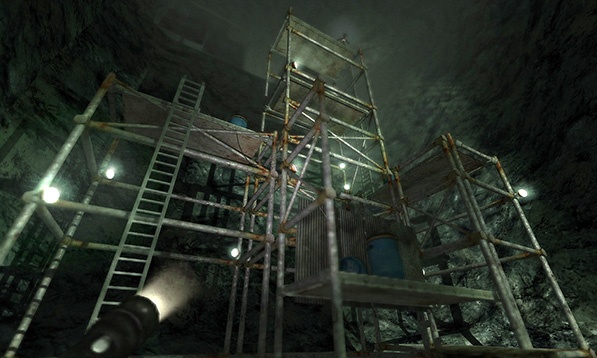 As with Overture, Black Plague is structured around a few central hubs that lead off to other areas and while this allows players some welcome freedom to deviate from the straight and narrow it also allowed me to access certain areas and solve puzzles or pick up objects before there was any logical reason to do so; a quality I’ve always associated with non-linear adventure games. At one point I’d ended up in a computer room fixing a network server. Don’t get me wrong, it was a fun little puzzle and I’m betting a damn sight easier than it would be in real life, but at the time I didn’t quite know why I was supposed to be doing it. All I knew was that at some point I was going to have to do it anyway.

Should I be doing these puzzles before I need to? Should I be picking up these seemingly useless items? Should I even be allowed to? Should Philip want to? Should I want to? All interesting questions. Frictional could have put me in a straight jacket and linearly dragged me from one plot point to another but where’s the sense of adventure in that? They could have bombarded me with so many useless items, pointless minor puzzles and empty areas that I’d have been driven to follow the logic of the game for fear of becoming a deranged puzzle-solving rag and bone man. That would have been an interesting experiment if nothing else. I’ve heard that Amnesia: The Dark Descent has all the subtle cues and magical sign-postery of a Valve game so these rare moments of aimless bumbling about may very well have been reduced even further.

That being said, if I sense a game is leading me somewhere I tend to go in the opposite direction anyway which probably says more about me and gamers in general than these well intentioned guiding devices. It’s one of the reasons I loved Every Day The Same Dream: years of hidden areas, secrets and haplessly triggering events that prevent us from returning to areas has conditioned us to ignore instruction and go off exploring. There were times in Black Plague where exploring for exploring’s sake seemed totally out of the question purely because, well, let’s just say that some areas didn’t exactly have welcome mats outside their doors. 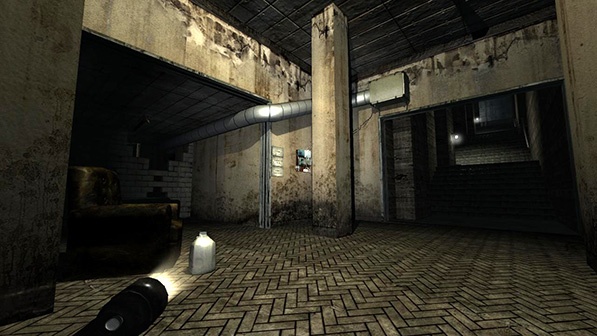 The backbone to Penumbra: Black Plague is its story, and most notably here, the way it’s told. Penumbra: Overture was shrouded in mystery; ominous notes, unsettling records, barricaded passages and locked doors all hinted at something altogether more sinister going on. Philip wanted answers and thankfully, as players, so did we, even if our curiosity seemed destined to kill the proverbial cat and all of its kittens. Black Plague picks up right where Overture left off, and over the course of the game takes Penumbra far beyond its comparatively modest prelude into bold, thrilling and equally bizarre places, and save for a few moments it’s rarely predictable. The story is a little weak once it has been unfurled but it’s told so impeccably and complimented with such enduring characters that it never failed to keep tugging me along. Most surprising of all is the welcome streak of anarchic black humour breaking through all the po-faced dilapidation, even if a few moments of it were somewhat out of key with the game. Tannoys occasionally announce redundant protocols into the earless gloom, all delivered by an upbeat, seemingly unhinged female voice reminiscent of GLaDOS and to a certain extent Xerxes from System Shock 2.

Major plot spoilers: speaking of System Shock 2, Black Plague’s ingenious and unique antagonist Clarence, was a totally unexpected surprise and I believe, conceptually, he ranks up there with Shodan. Clarence is the twisted personality that splinters off in Philip’s mind after he contracts the Tuurngait virus; he is the beating heart of Black Plague’s humour and  the driving force of the game. Unfortunately, for a long time I found his accent jarring and, while I did eventually get used to it, I spent a good portion of the game furrowing every time he spoke up. This wasn’t something I encountered with Overture, which apparently had such a paltry budget that Frictional Games couldn’t afford professional voice actors. Red was truly remarkable from start to finish and Philip’s voice in the intro of Overture sounded genuine and natural. But here in Black Plague — where professional voice actors were used — I’m inclined to say that some of the voice acting sounds a little too, well, voice acted. I’m being very pedantic here because generally speaking the performances are solid and convincing, but it was apparent right from the moment Philip started delivering his opening lines that something had changed. End spoiler.

Black Plague has a clever and confident awareness of itself and the player which I can only assume is what makes it so consistently entertaining. In a few ways this sensitivity reminds me of Thief, System Shock 2 and even Bioshock. It wryly comments on your situation while jabbing fun at your ability to problem solve; it subtly breaks the fourth wall and makes you do numerous double takes — did I just hear that? Did I just see that? At one point I actually checked a video walkthrough to make sure that what I’d just witnessed wasn’t a glitch. It turned out it wasn’t and this anomaly was later explained.

Scare spoiler: for me the most spine tingling moment in the game was when I’d found the necessary objects to gain access to a particular area and on arrival saw that the door had disappeared. For that brief moment I was trapped and didn’t know what to do or where to go. It caught me unawares and was such a slight visual trick. End spoiler. 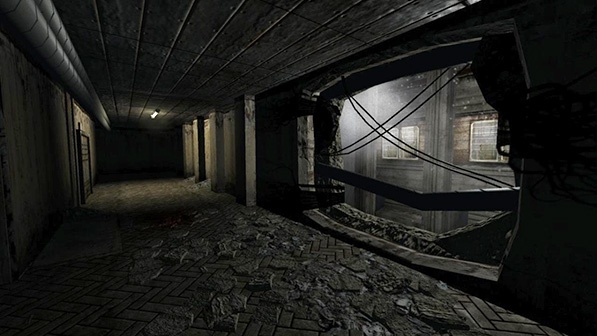 Given the game’s technical limitations, Frictional Games and Tom Jubert — the writer and narrative designer of the Penumbra series — should be commended for such an ambitious but carefully measured effort. Few games would be able to deliver so much with relatively so little. The finale is as equally unexpected and as rousing as its predecessor’s, and despite it tidily wrapping up the story thus far I don’t think I’ll be able to resist firing up Requiem to properly end the series.

The Penumbra games can be bought from most digital outlets and are available directly from Frictional Games’ store. Demos of each title are also available here.