This is a post all about funny events that really happened.

I’ll start at the top with a confession.

Last year I got myself a press badge for the Philadelphia-based gaming event Too Many Games. Then, after attending the event, I struggled with how to write an article about it that properly captured the zeitgeist. As a result, a draft for this article, sans content, sat in the drafts folder on this site for an entire year. Steerpike can attest.

Seeing this unfinished draft sitting there, taunting me, I resolved that I would attend the event again, and write about it this year, as penance. Of course, this year, I forgot to register for the press badge in advance, so now I had to pay at the door. I can’t feel too bad about having to pay, since enjoying the event gratis one year means I should very well pony up the next. Anyway, I feel much freer to write about the conference in my own words this way, without any puff.

Too Many Games is an event I’ve typically regarded as a minor thing. This is because I’ve been spoiled by attending at least one PAX a year. An interesting thing about the Too Many Games event, though, is that while it seemed small and weird to me the first time I attended, every year it seems to get bigger, bolder, and attract more people from further afield than just the usual Philadelphia locals. 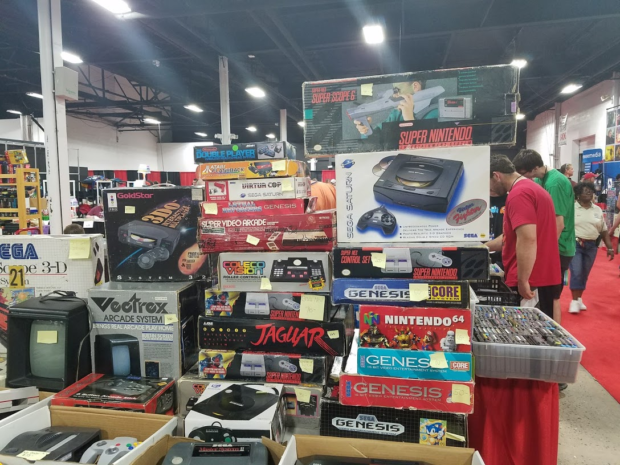 To describe the event in brief: it has five major components. First, one big expo room full of vendors – mostly retro games stores and independent artists, kind of a combination flea market and craft fair, but with video games. Second is an open, free arcade, featuring dance games, fighting games, and retro games in open play. There are panels, and an area set in the back for other entertainment like costume contests, which I’ll throw under the panels umbrella. There are concerts: one stage set up for local and other game-related acts that make this event partially like a mini-MAGFest. And of course, there are indie games, from developers and students alike. A minor component, in the form of a tabletop games area, was added in the expo hall this year, and I’m wondering how much this is going to expand in the wake of PAX Unplugged coming to the city later this fall.

Where it comes to indie games, there wasn’t a lot there last year that I hadn’t covered before. Whenever it strikes me, I do my best to highlight local indies coming out of the scene here in Philly. Rather than retread, I’ll link this highlight reel done by my friend Elliface on Twitch, where she played different Philly-based indie games every day during the month of April this year. It you gives some idea as to the variety of what comes out of this scene, and who the major players are.

This year at TMG, I did see some games I hadn’t seen before! IntiCreates had a stall at the event, there to display about four different flavors of Gunvolt. Pixel art seemed like a prominent theme with RPG Pixel Noir and co-op beat ’em up Neon Krieger Yamato catching my eye. There was also a nice display for cute-horror game Spooky’s Jumpscare Mansion – one of those games I always meant to write about, once I got around to it. What I’m learning about indie games at these events is that if I want to see new content at a local festival, it’s probably best to only attend every other year. Despite the fact that there’s millions of games in the world, on a local level games are only released so quickly.

Then, There was Cosplay Wrestling

To explain what happened at the event on Friday evening, I’m going to have to bring back a segment I sometimes write called “Conversations with my 16 year old self.”

Me-Now: Hi, 16 year old me. It’s weird that we’re still in touch after all these years. I keep getting older, and you keep being the same age. Anyway, you gotta hear about the thing I saw this week.

Me-Now: There was this thing called Cosplay Wrestling. It was pretty good amateur wrestling, like, as in pro-wrestling, but also with people in costumes. Basically, a guy dressed as Ryu, got into a public fight with a guy dressed as Sub-Zero, in the style of backyard WWE.

Me-Now: Oh, sorry. WWF. I forgot about the pandas. But you know, wrestling. 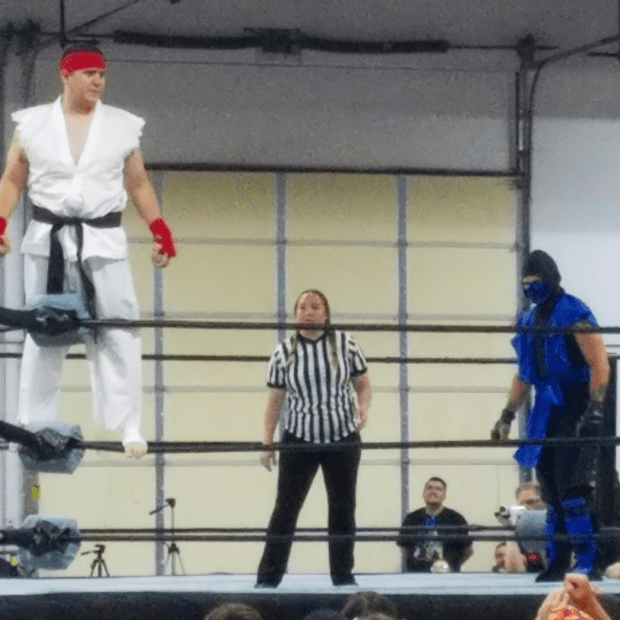 Me-Now: Yes. That did happen.

Me-Now: There’s more. There were tag team matches! The first one was Team Rocket, versus Deadpool and Harley Quinn.

Me-Now: Yeah, and I coincidentally wore my Team Rocket hat that day, so I was in a bucket. If it helps, though, it was just like, two guys in Team Rocket gear, so goons, not Jessie and James Team Rocket.

Me-16: Oh, so Deadpool and Harley Quinn then. 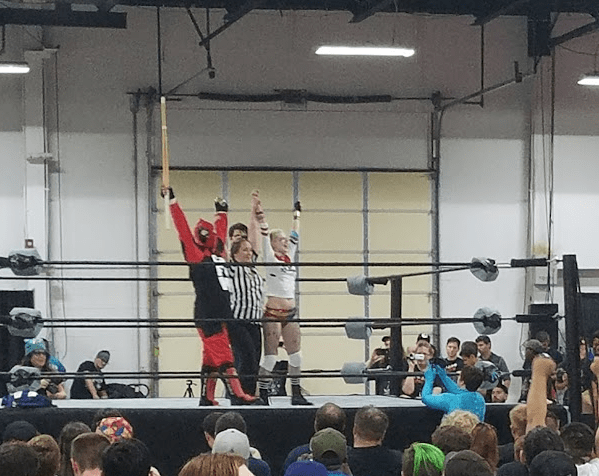 Me-16: Wait, is that what Harley Quinn wears now?

Me-Now: Yeah. Um, that’s another story entirely. Anyway, check this one out: 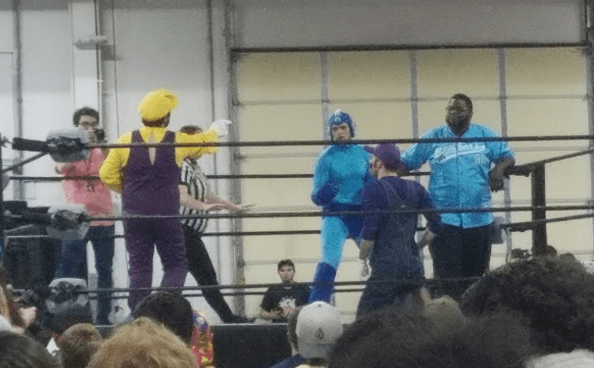 Me-Now: There is a Waluigi.

Me-Now: That’s Mega Ran. He’s a rapper, who raps about Mega Man. And Street Fighter and like other stuff like that.

Me-Now: I’m not going to tell you who the President is.

Soooo anyway, yeah, that’s Mega Ran! He wrestled with cosplayers, and the world is a surreal place. He’s one of the artists I’ve mentioned before as part of the locally based nerdcore/geek music scene. This has developed a lot over the last several years. MAGFest is obviously the place to be to see what I’d think of as big-name acts in the space, but if you couldn’t make it, Too Many Games has you covered, with lots of geek-related acts big and small.

Philadelphia, over the last couple of years, has developed an impressive variety of game-music related artists. This is largely in part to local artist DJ Cutman, AKA The Video Game DJ. DJ Cutman is a local chiptunes artist who’s been remixing game music for a long time. Now with his own label, GameChops, he highlights chiptunes artists, promotes other DJs, supports their labels, and runs regular dance parties and DJ battles at multiple local events. Also, he dresses like Cutman. That’s key.

This year, the theme of the Too Many Games show happened to be Sonic the Hedgehog. DJ Cutman appropriately kicked off his set by playing some items from his upcoming Sonic-themed ensemble remix album, Spindash 2.

Following around DJ Cutman and listening to his This Week in Chiptune radio show has done nothing but improve my life, so if you made it this far, I’m happy to share the magic with you. He’s a tremendous performer who also does great things for the local music scene as a whole. The rest of the local DJs are pretty fun too, but video game remixes have always hit my happy buttons.

On Sunday, we finished off the event by playing a full round of Shadow over Mystara at the free arcade. This probably would have cost me 20 bucks with how bad I was at it, so I’m glad it was free and it therefore it didn’t. Note my accidentally slipping and picking a second J in my name for that truly authentic fat fingers at the arcade experience. 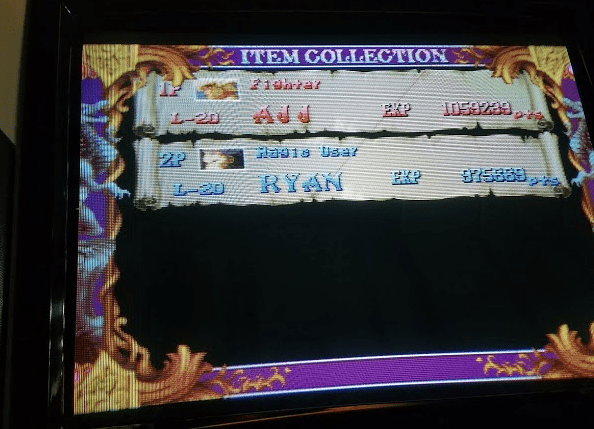 After a fun weekend, and a little round of shopping, I just want to close out with one more word to the wise to my younger self. Dear me: Don’t resell any of your old game stuff. 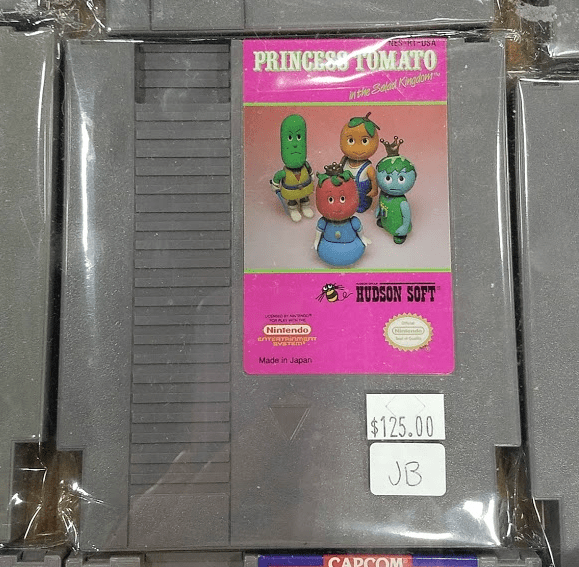 Me-Now: Yeah I seriously have no idea.

2 Responses to Too Many Games and the Philadelphia Game Scene

Side by Side: Double Takes