Finally being the owner of a Playstation 3 console, I’ve taken the chance to play some of the games I missed. One of those games is the original Uncharted: Drake’s Fortune. I’d played a little of the second, and a little of the third, but I had yet to touch the original. I came in with a general feeling of goodwill and an open mind.

And now I’m struggling with this. Though I’ve heard nothing but raves, I personally did not like the first Uncharted game. It’s hard to look at something so beautiful and say “it aged poorly,” but in many respects I think my problems with the game are that I came to it when I did, and not when it was new. It’s possible that when the PS3 was new this would’ve been awesome. In 2012 for a first-time player, it is less awesome (especially when the first time player is me). So let me tell you exactly what I didn’t like about Uncharted. And the few things that I did.

In Uncharted: Drake’s Fortune, I play as Nathan Drake, a charming everyman adventurer who’s dexterous, but self-effacing and a little sarcastic. He’s good with a gun, too. And he had better be, because the game is about forty percent cover-shooter. Uncertain platforming makes up another forty percent, and the rest is split between vehicle sequences and cut-scenes. 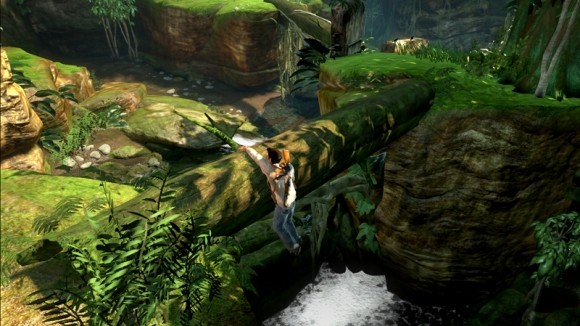 The problem with the platforming in Uncharted is that it’s of the school that favors beauty over responsiveness. In a responsive platformer, the character jumps when the player hits the jump button. In a cinematic platformer – Tomb Raider was a leader in this school – the character jumps at the soonest possible time that his/her run animation will permit, some time vaguely around the time that the player hits the jump button. That means the jumping looks elegant to a third-party observer but feels sluggish to the player. In Uncharted (and Tomb Raider, and games like this) the platforming is usually cheated a bit by a ledge-cling power on behalf of the protagonist, so that while the jump itself is hard to time, the landing is forgiving. This is fine, and works great in lots of games. But it’s not always entirely clear in Uncharted how far I can jump and still cling to a ledge. It’s also not entirely clear how far I can fall before Drake perishes. Some drops of a story or more cause no damage in certain chapters but are instant death in others. It’s all exception-based depending on what’s going on at the time.

The environments are high-fidelity, and look marvelous. In this sense, Uncharted: Drake’s Fortune wants to deliberately invite comparisons to Hollywood adventure blockbusters. I personally feel it compares a lot to Final Fantasy VII. Both games were developed early in the lifecycle of their respective consoles. And both games have environments that, while they are pretty, seem to be designed by people who didn’t yet know how to be responsible with the great power of the hardware they were working with. In attempting for the highest possible fidelity, Uncharted often fails to provide obvious affordances.

How am I supposed to feel, exactly, when Drake says “I’m goin’ around in circles in here”? Yes, I agree with you, Drake. The levels, while detailed and lovely, do get to look all the same after a while. It’s easy to get turned around. Your lampshading it just allows us both to share in a frustration that should not have existed.

And, no, Drake, I don’t know where all these guys with guns are coming from. 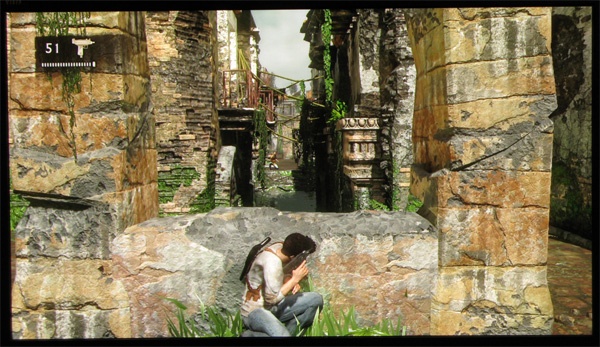 A lot of hay has been made of the ludonarrative dissonance of the Uncharted series, related, specifically, to all of the murder. Here I will just nod in general agreement. Indiana Jones certainly killed, but never in this volume or with this little excitement or sense of variety. I arrive in a tomb, ostensibly untouched for centuries, because I was the first one to solve the puzzle of how to open its entrance. I am entirely unsurprised to be somehow beaten there by three-dozen nameless, faceless goons. “Shoot to kill!” they all shout, because killing Drake is apparently more important than the fact that you’re ahead of him on his treasure hunt. As it turns out, this ancient, untouched corridor opens up to nowhere in particular anyway. Why’d I bother again?

Also, I can’t figure out why shooting is mapped to the right shoulder bumper. Why isn’t it on the trigger, like in every other console shooter? More to the point, why do I not even have the option of remapping controls I dislike? 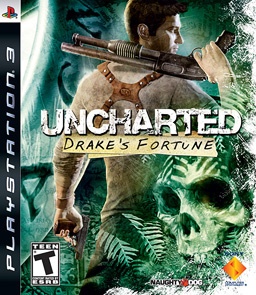 As mentioned, Uncharted has a few puzzles. They are the opposite of what they should be. I obviously understand that I have to somehow arrange some sigils I found in a particular order, because I have a document onhand that numbers them. But how do I interact with them exactly? Do I touch – what button – oh, I climb up there? Maybe this is realistic tomb raiding, but it doesn’t engage my brain in an enjoyable way. What would be interesting is instantly knowing how to interact with the puzzle, but having to deduce the answer.

As far as vehicle action goes, there’s a little fun, by the way of a rail-shooter sequence on the back of a Jeep. The other vehicle sequences involve a jet-ski, and they are the opposite of kinetic. One would think that riding a jet-ski up a roaring river, while men above shoot at you with guns, could not be made dull. But it is dull. The best way to approach the water sequences is by treating the game as a cover-shooter still: edging the vehicle slowly up the shoreline, hiding it behind pillars, and carefully waiting for men to pop out their heads to be shot. Any attempt to, say, go fast, or enjoy yourself, is going to result in death by snipers in short order.

Speaking of water sequences, when Drake dives into the water, his shirt gets temporarily wet. Having not played the game prior, I was nevertheless aware of this important detail from the marketing. What I didn’t realize was that, the first time this happens, Drake makes sure to point it out himself. “I’m sure wet!” he says, in a way that highlights the artifice.

The game has some good things, which I will give it its credit for. A horror-type enemy in the last act adds some much-needed combat variety. (Their AI is a little primitive, but I can’t really blame a melee-oriented monster for backing off when I get the high ground.) The cover shooting in itself is fairly responsive once you recognize the fact that the game is mainly a shooter. Uncharted is also a great tech demo for environment design. The tropical grasses and trees are lush and inviting. Colored light scatters playfully off of wet-looking surfaces. Characters’ eyes are glossy and their skintones scatter believably. Production values are definitely high in other areas too: the game has solid voice acting and snappy dialog.

So… maybe it’s a game/movie, like the marketing emphasizes. I’ll be the first to admit that I’ve slogged through some unpolished, even downright terrible gameplay in service of a great game story. But Uncharted has … just an okay game story. It’s perfectly serviceable action movie pulp. But it’s a fairly straightforward story that doesn’t say anything new or take much advantage of the videogame medium in its telling. It also feels really tacked-on when the game implies Drake is covering literally uncharted territory, only to meet mobs of prepared thugs when he gets there. I think trying to be a Hollywood movie does the game a disservice in a way. If it were a Hollywood movie, it would be a fairly forgettable one. 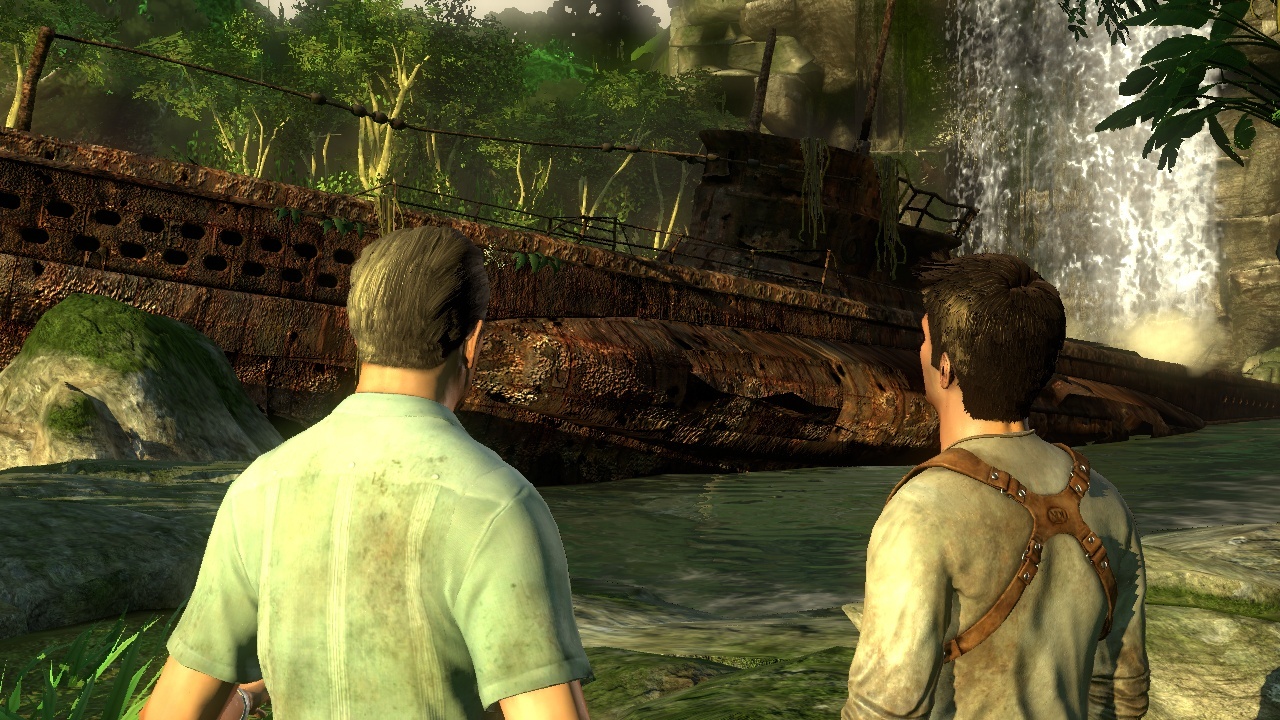 One last thing I liked about Uncharted is that it is short. That seems like a sarcastic thing to say, as if I were saying, “at least it was over quickly!” But I actually sincerely mean that. It’s nice to try out a story-focused game with low commitment, something I can finish in a day. Of course, at about 8 to 10 hours (depending on how often you fall (and I fell a lot, so I’m calling it at around 9)), it’s still too long to be a film. There’s little reason to play it again, unless for some reason looking for glittery treasure bits in bushes to get Trophies is an interesting hook to you (it isn’t to me).

I do have the second Uncharted game, because I got them in a bundle. I’m likely to play it. And from what I have played of it so far, I find it all right, and a bit of an improvement on the formula. But, to sum up, I didn’t care much for Uncharted: Drake’s Fortune. Given the plaudits it’s gotten that really surprised me. I guess maybe you had to be there when it was new to feel much enthusiasm.

Discuss: Rage Against the Rage Quitters