In our previous episode, a stalwart hero named Steerpike (actually his name is Ste, because it’s really irritating entering letters into the PS3 with thumbsticks) died 133 times while accomplishing essentially nothing at all. That installment took me to about October 12, so an even week of play since Dark Souls released. I’ve been writing these silly diaries in an email chain to friends who literally couldn’t care less, so what you’re reading here is the edited, tidied up, improvified versions.

This time around, Ste ventures ever higher into the Undead City, a dizzying confection of parapets, towers, bridges, and horrible, horrible monsters. Taurus Demon lay in defeat, and onward I continued my quest to find and ring the Bell of Awakening, a task given to me by a person to whom I owe nothing and who provided no reason whatsoever for asking me to do it. To adventure!

With Taurus Demon down, there’s naught to do but head across its bridge and see what horrors lie beyond. You may have heard offhand that one such horror was a dragon. A large one. Actually you know how I closed the last installment?

The adventure continues! I wonder what’s over that bridgOHDEARFUCKINGCHRISTIT’SADRAGON

Imagine me shrieking that last part in a high-pitched schoolgirl voice. My voice is normally pretty deep but when I get startled I tend to go up a few octaves. Not my manliest feature. I’m also afraid of spiders.

At this altitude the Undead City is riddled with towers and bridges; a big dragon has claimed one as its home. Nearby player messages point to its tail as a weak spot, but I’ve never killed a dragon in a Souls game and I doubt I’ll start now. Besides, attacking its tail means, you know, getting close to it. That’s not going to be easy. I have noticed that the dragon does fly off on errands sometimes – and is sometimes gone for a pretty long while – but so far I haven’t been able to pin down any sort of schedule. I think it might be off to pick up the kids from school or take them to hockey practice or something, or maybe it takes night classes? I don’t know.

The campfire I’ve been using for most of my first 133 deaths is still an ideal staging area. One of the things I’m learning about the immense open world of Dark Souls is that most places tend to sort of circle back to each other, meaning if you look you’re likely to find lots of convenient shortcuts. I’ve already kindled that fire, which means I get twice as many healing doses in my Estus Flask, so I see no reason to leave it yet. 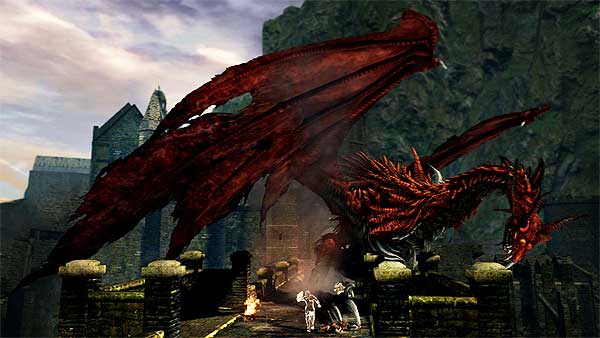 The dragon would be a problem, but a narrow staircase leads down to an under-bridge of sorts, haunted only by skeletal knights. Those guys I can deal with. Shortly thereafter, however, lurk three diseased rats, and I’m still having difficulty working out a way to destroy them without getting poisoned. Spending souls to increase my Resistance stat is the obvious approach, but souls are a little thin on the ground in the Undead City. I’m Level 23; it costs a good 3,500 souls to upgrade a stat, and the paucity of souls makes accumulating that much a big pain. I still haven’t found a bow, and my Sorcerer’s Soul Spear just seems to make them angry. These rats aren’t too hard to kill, but you wind up fighting them on this incredibly narrow causeway sort of thing with a dragon roaring above and a billion-foot drop to the river below. Indeed, the chief problem, aside from the geography, is that their bite typically poisons you. Poison is no small matter in Dark Souls, because it degrades your health over time and takes a while to go away. You wind up using the Estus Flask to keep alive rather than to recover from battles, which impedes your ability to make forward progress.

After sneaking below the dragon and killing the rats I moved from Undead Burg to the Undead Parish, a second neighborhood in the Undead City. I don’t know how close I am to the Bell of Awakening, but I’m sure I’m on the right track.

There was this metal plated boar demon sitting on the stairs with some skeleton guards, just kinda chillin’ up there. This is maybe a block or two past the dragon’s bridge. At first I thought it might leave me alone, but no, it took its duties as a metal plated boar demon seriously and came charging down with smoke pouring from its nostrils. Player messages said “behind,” which I’ve gotta say I didn’t find too helpful. Behind me? Behind it? Seriously, people, choose your words. That could mean anything. 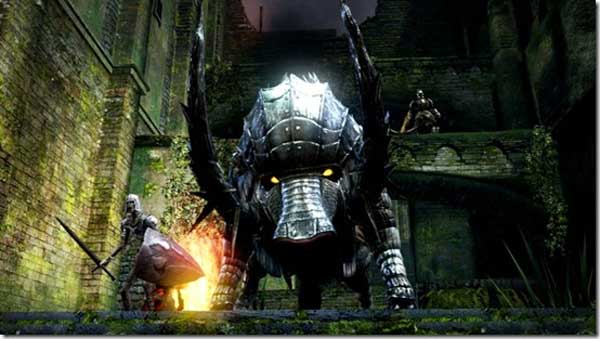 Hello, I’m the Armored Tusk. You can see why, it’s because of my armor. And my tusks.

I killed it, and it’s a bigger demon, so it won’t respawn. Shortly thereafter I had this conversation with Gregg over Steam:

Never tell your password to anyone.
STEERPIKE: GO TO BED!
GEGGIIS: It’s only 10:30 mate
STEERPIKE: Oh.
GEGGIIS: Want in on some Borderlands?
STEERPIKE: No, thanks, I just stopped in to check my email and stuff. Playing Dark Souls.
GEGGIIS: Still enjoying?
STEERPIKE: Oh yeah, it’s excellent. I just killed this giant metal plated boar demon thing.
GEGGIIS: Brilliant! I think that’s the part I played at the Eurogamer Expo! Did you kill it the same way I killed it?
STEERPIKE: I bet I did. Assuming you killed it by screaming like a girl child and hurling firebombs at it until it died.
GEGGIIS: No, I shoved my sword up its bunghole. Didn’t you see all the “Behind” messages?
STEERPIKE: Um. No. There weren’t any about. Weird.
GEGGIIS: Firebombs work too.
STEERPIKE: Hey, did you know that Dark Souls was originally going to be called “Dark Ring,” but they changed it because in the UK I guess that’s slang for “anus?”
GEGGIIS: So that means “Skyrim” is God’s asshole. 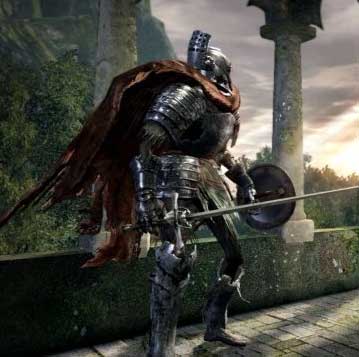 Hello, I’m a Cloaked Skeleton. I’m the sort of enemy Steerpike means when he says “harder but not impossible.”

I’d eased into an area that basically announced “You’re in the right place because the foes have suddenly become slightly more challenging, but not so much that you want to run away.” Bigger skeletons and Hollows, a couple of extra large-sized semi-bosses, that sort of thing.

I’ve left a few major opportunities behind. There is a Master – a deadly-with-a-capital-D demon – in the basement of the tower that led up to Taurus Demon’s bridge. I had a couple whacks at him but it quickly became clear he was way out of my league. So though I’m curious what sort of riches he might be protecting, I’m gonna need some serious power boosts before I go after him. Besides, there’s a ton more to explore and it appears I’ll be in this general neighborhood for a while yet, so he can wait.

I found a delightful caption adorning a screen shot in some blog reviewing Dark Souls: “RUN AWAY! CAN I JUST RUN AWAY? PLEASE SAY YES!”

And I discovered something really cool about the always-on multiplayer: whenever any player manages to ring a bell, you hear the sound in every game. It’s a little thing, but touches like that can be better than gold. The Bell of Awakening is first on my task list of things to ring, followed by the Bell of Remembrance, and I enjoy the idea that when I ring those bells, everyone else playing Dark Souls at that moment will hear the sound. It happened a couple times while I was playing tonight and it made me smile. Sort of reminds you that there are others out there, enduring what I’m enduring.

Dark Souls is an open world, unlike the hub-based structure of its predecessor. Everyone agrees that the Undead City is the best place to start, but I was curious, so I wandered back to Firelink Shrine and took some other paths.

Just a tip: the Undead City is the best place to start.

In the New Londo Ruins I met two great big fat twin demons who only went down after my entire collection of fire bombs was rained upon them. My reward? Like ten souls each and a fucking dung pie. I rid the world of two hideous abominations and I get a glob of excrement as my payout. The dung pie apparently poisons demons who approach it, but it poisons you too, and poison is serious business in Dark Souls.

In truth I think I was stalling, because I essentially have two paths open to me: “forward,” and “kill that guy in the basement of Taurus Demon’s tower.” As I mentioned earlier I left a fairly major demon alive in the general neighborhood where Taurus Demon lived. I haven’t seen any new actual boss demons, but this guy would give any of them a run for their money. 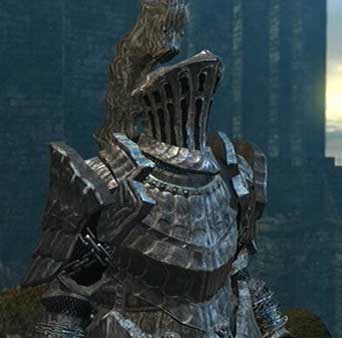 Hello, I’m Havel the Rock. You’re going to have to read a lot more of these Diaries before Steerpike beats me. Spoiler!

Anyway, I went back to the Undead City where I belonged (I’m undead too, everyone’s undead here, I don’t know why these ones in the city are so mean), and made a series of utterly thwarted efforts to kill him. This afforded me the opportunity to improve my combat reactions and save up a multitude of souls, which I then invested in a short bow and some arrows. With this I can almost always get past the three diseased rats in the under-bridge below the dragon, but it doesn’t do much against that super demon in the basement. I took a moment to look him up on the Dark Souls wiki: his name is Havel the Rock, and he’s one nasty piece of work. But he has something I need.

You see, I also learned that in Dark Souls, your maximum carry weight really is your maximum carry weight. Whereas other games don’t penalize you at all if you’re carrying 99.898867376 kilos and your max is 100, in Dark Souls you suffer significant penalties to speed, dodging, stamina, and reaction time if you’re carrying more than half your maximum. Since you can’t sell the shit you pick up off bad guys it seems like this wouldn’t be too bad, but between my chainmail armor, my longsword +1, and my Hollow Warrior Shield, I’m at 24.5 pounds… out of a max of 50. So one of my current challenges is to find equipment that protects better but weighs less.

I didn’t make any physical progress in this recent 51-death marathon, but I learned a lot and gathered some useful items. I can now leave messages for other players, and recommend ones that I like. A recommendation gives you one more shot in your Estus Flask, which is welcome, but you’d be amazed how many stupid, pointless messages people leave. They’re in the game for a purpose. I’ve lost count of how many messages I’ve found that simply say “Praise the Sun!”

You know what a useful message might have been? “Be wary of enemy on the right.” Fuckers. Fuck the fucking sun. It never shines here anyway.

Tonight I’m going to give up on Havel and try to make more progress toward the first bell. It’s not like I’ve seen any signs saying “Bell ahead,” but you know, it can’t be too far.

I am so busy with a project at work that I literally haven’t checked my email in two days. Apparently I run a popular gaming website, too… I should check on that sooner or later. Yet still I managed to play until 3:00am yesterday.