I play fighting games for the story.

I say, “I play fighting games for the story,” and then, I usually follow up with the joke, “which is like saying that I read Playboy for the articles.”

But it’s true… or, it’s at least, partially true. I could say, rather, that I play fighting games for the characters. After all, colorful characters are the core of fighting games, and central to their appeal. But that’s not quite it, either.

For a small, but formative time in my life, I worked with designer Jesse Schell at his company in Pittsburgh, PA. I recall vividly, one day in the office, that he was talking about a game he’d played that year that had surprised and delighted him. This game was called The Subspace Emissary. If you’ve heard of it at all, you know that that’s just the name given to the story mode of Super Smash Bros. Brawl. If you’ve played any Smash Bros. game, you know that the metaphor that drives the game’s backstory is literally one of a child who owns a lot of action figures. He smashes the figures together, and makes them fight. In the context of Brawl’s story mode, the Brawl designers came up with lots of different reasons these little action figures might fight… or might temporarily team up, to go on a short adventure together, fighting other enemies along the way before parting ways for some other zany subworld. At the end of the story of any Smash game, the final foe is “Master Hand,” literally, a gloved hand, representing the hands of the child playing with his toys. To defeat the Master Hand is a small triumph against a petty and unforgiving God. 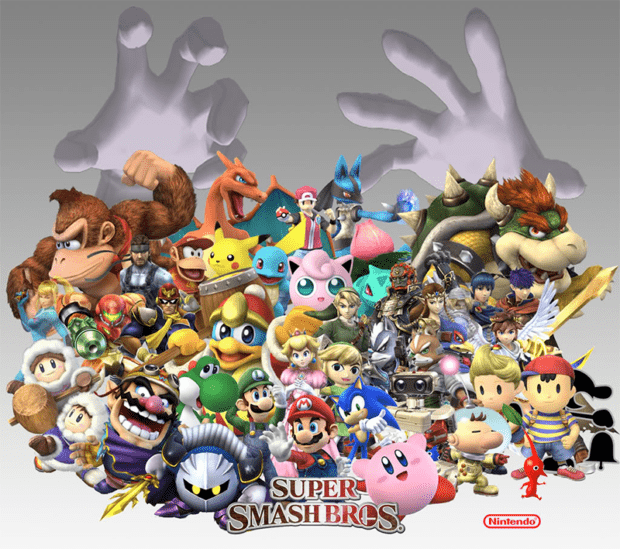 In an earlier part of my life, I once ran a round of the tabletop RPG Big Eyes, Small Mouth which I called “Fighting Game: The Movie.” Players randomly rolled character parameters off of a chart, and given even confusing results, they had to fashion a somewhat complete character. For example, you might roll that your profession was a baker, your fighting style was kung fu, and your country of origin was Italy. Or you could be a kickboxing DJ alien from outer space. After the random chargen, the actual “point” of the game was an improvisational writing exercise wherein people had to decide exactly why this random character was invested in an underground fighting tournament, which other characters in the game they had pre-existing rivalries and relationships with, and come up with as many reasons as possible for them to encounter those other characters and challenge them to duels over some beef… until it all came head to head with them resolving their differences and teaming up to battle the real endboss.

Structurally, Street Fighter V‘s story is similar to the structure of the story mode in Mortal Kombat X. I can’t be sure, but maybe this was Capcom aping the format. Mortal Kombat is another fighting series I love partially for its willful narrative incoherence. It has all of the classics: 10,000-year-old princesses, insect people, Aztec God-kings, Jason. But Mortal Kombat, for what it’s worth, took all of these desperate elements (well, aside from Jason) and arranged them into something that resembles a coherent yarn. The mode finds a way to let the player stick with the same character for three fights at a time. Though you never feel like you’re sure that you, as a player, know what “side” you might be on, playing Mortal Kombat X’s story mode until the end feels fun and results in a good reward.

Street Fighter V has its highlights, of course. I was happy to see some personality displayed by the “Dolls,” Shadaloo warriors who were, in previous titles, essentially palette swaps. Rashid, a new addition to the roster who fights with technology, is an interesting new character from a design and story perspective. I’m all in for Frankenstein’s Monster Charlie Nash. And seeing pampered rich girl Karin Kanzuki take charge of the mission and order around the rest of the crew is a joy. Her broadshouldered-in-formalwear look is my new #goals. 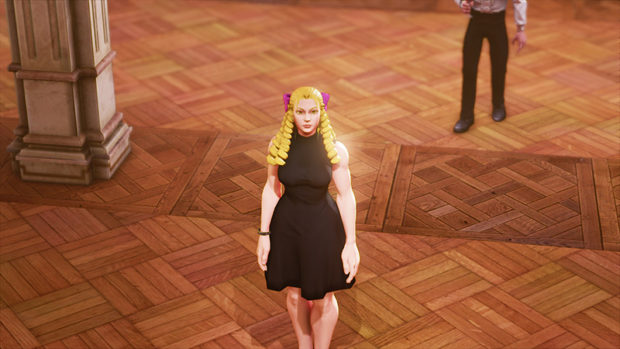 But the bad here outweighs the good. Long cutscenes, some of which are fine if awkwardly translated, are interspersed with single-round combats, which generally seem… perfunctory. Often, the character you’re tasked to defeat doesn’t even have a proper name. Viewpoints swap wildly as well, much more so than in the Mortal Kombat story. Just as an example, I might be playing as Rashid, only to swap immediately to FANG who now has to defeat Rashid for the story to progress, and there is not much clear warning that my player character has changed other than what side I’m standing on. Things that should be fights (oh, cool I get to play as Zangief and Rainbow Mika in a tag team?) turn out to just be teases with no player action (no, you just have to watch that one happen). And a minor but real annoyance: small details in cutscenes are handled by the Havok physics engine, just as the main game is, meaning the actual position of things like characters’ hair and clothing is left up to God. It’s extremely distracting for someone to be having a tearful and heartfelt character moment while a wild ponytail is spastically clipping through her shoulder.

Rashid is in search of “his friend,” a hacker so mission-critical that she is never, to my recollection, given an actual name. Trying to make an old plot thread from Street Fighter III make some kind of sense, the Illuminati occurs. The battle difficulty spikes wildly around Cammy’s chapter, at least when I initially played it (her second fight here is against some cop dude who is not even a properly real Street Fighter character). Then, the climactic battle against Chun-Li and most-famous Street Fighter endboss M. Bison which should, logically, occur at the end of this story… is denied to the audience on a technicality. Ryu is obviously the “main character of Street Fighter,” so he should get to beat the bad guy at the end, despite having no prior heat or existing story rivalry with Bison. Boo.

Without the stapled-on gameplay bits, and just a few fixes for story logic and flow, this story might have been really good as a digital movie. In constrast to SFV for example, the Juri Han animated short film for Street Fighter IV is a joy all the way through. Maybe Capcom could just stick to making anime.

Now we are on the verge of the release of a new Marvel Vs Capcom title. I was excited when I first saw the reveal. As a long-time Mega Man X fan (evidence:  my icon) I was happy to hear that the new endboss was a combination of Ultron and Maverick leader Sigma. I was all ready to open my wallet… but, I admit that the news of the game’s full roster had me a little less than inspired. I completely understand why marketing and rights reasons removed characters like the X-Men, and my personal favorite Deadpool, from the game. But other than the Mega Man X content, there’s not many exciting surprises… frankly, I’m starting to worry that with this, and a disappointing Street Fighter V, Capcom may be slipping away from being my favorite fighting game studio. Though Marvel Vs Capcom Infinite seems it will launch with a story mode… for what it’s worth.

Recently, Nintendo, whose Subspace Emissary was so entertaining, joined the fray again with an arena fighting/boxing-shooting game called ARMS. Here – with a pointer taken from a Tweet, which is actually text taken from a Kotaku review – is the entire backstory of the game ARMS:

“…one day, people just woke up with extendable spring arms. Nobody knows why. Some of those folks decided to use their arms to make money fighting.”

That is it. That’s the story. For more details about this amazing non-story, here’s a developer interview:

“It’s possible that some characters have had this since birth and it’s also possible that, for some characters it just suddenly…one day, they woke and were different. So, there are actually, really several different possibilities that could be the cause for this. So, aside from Helix, all the other characters like Spring Man, Ribbon Girl, and Min Min – these are just regular people with extendable arms and not cyborgs or anything like that.”

Uhhh, sure, that sounds good!

I haven’t played ARMS yet. But I want to. Not for the reason that the story seems any good, obviously, but because of something else touched on in the above article, which is this character: 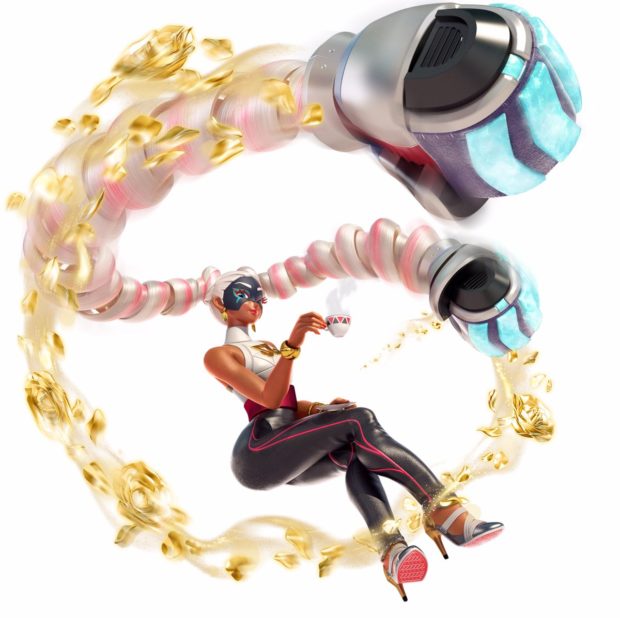 Since I bought Street Fighter V initially to main Rainbow Mika, I’m starting to fear I might have a “type.”

But given how disappointing my old habit of playing fighting games for the story has turned out to be, I think I’m going to have to cut back on it. Fighting games are, after all, designed to be played with others. The real stories in fighting games aren’t supposed to be the “canon” stories, anyway. They’re the stories you tell your friends about the amazing matches you had with one another. You pick up your action figures, you smash them together, and you make memories.

10 Responses to I Play Fighting Games for the Story