When his eyes meet yours, you know you want to stay. But if I stay, you think, it must be for the right reason. It must be because he is a magician who will help make my quest a success. It can’t be because of my feelings. I haven’t time for that now.

Should I just come right out and tell him what’s on my mind? you wonder. Or will he think I’m silly? Childish, even? Or should I just leave, and find a magician who won’t complicate my goal with romantic feelings?

What is your decision?

If you leave to find a magician who won’t be a romantic problem for you, turn to page 37.

If you stay, being honest with Folc about your feelings, turn to page 130.

When I have occasion, I like to explore the somewhat narrow world of games that specifically target straight women. I also enjoy writing about Dungeons & Dragons. Knowing these facts about me, a friend of mine gifted me recently with a pair of books he’d found at a used book store: Secret Sorceress and Moon Dragon Summer. These two books are from the short-lived Heart Quest collection, a book series written in the early 1980s and published by the venerable TSR Inc.

These are real Dungeons & Dragons story books, their stories taking place in D&D inspired settings with D&D magical spells and classes. The books are, however, written for young women, likely teen or pre-teen in age, and feature only female protagonists. They are also “Choose Your Own Adventure” style books, as you can tell from the snippet reproduced above. A reader of the books is also like a player, making choices at critical moments, then turning to the appropriate page to see how those choices worked out.

Choose Your Own Adventure is actually a brand trademark as well as a style, so not all books that read like Choose Your Own Adventure are technically Choose Your Own Adventure. There were actually several book series of this type published for young readers in the 80s and 90s under different labels. This series, Heart Quest, was spun off from the more successful Endless Quest brand. Unlike Endless Quest, which according to Wikipedia had 36 volumes in total, there are only six Heart Quest books. This relatively small run may indicate that marketing D&D adventures directly to pre-teen girls wasn’t a particularly successful gamble. But, given that pen and paper roleplaying has long been regarded as a hobby for men and boys, and that the role of women in this hobby is still debated to this day, it’s remarkable that TSR tried. It’s particularly remarkable that they tried in the early 80s. These books as it turns out are very cool, and even historically important to fans of Dungeons & Dragons.

Take Secret Sorceress, the book that was listed as #3 in the Heart Quest series and was published in 1983. It features a unique cover by someone credited as “Elmore.” This is legendary Dungeons & Dragons artist Larry Elmore, in an early piece that would predate his famous covers for the Dragonlance series of books in 1984. The cover has similarities to the slightly later works, depicting a young woman with feathers and beads tied into her flowing red hair. 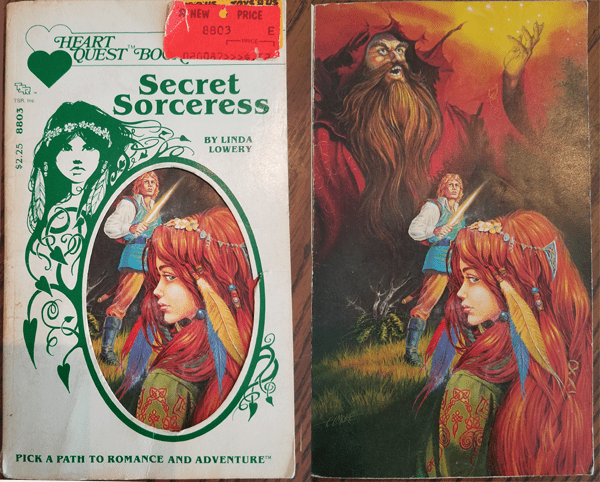 This young woman, interestingly enough, is the sorceress Mialie. The class “Sorceress/Sorcerer” would not appear in Dungeons & Dragons officially until the third edition. And nor would the name, where a “Mialee” shows up as the archetypal third edition elf wizard. In Secret Sorceress, Mialie is a wizard essentially, but with looser rules around her spellcasting that are easier to fit into a narrative. These rules might theoretically lend themselves to the sorcerer mechanics that wouldn’t appear in D&D properly until the year 2000. In Mialie’s world, magic-users are shunned. The central conflict of her character is whether she should embrace her magical powers at the risk of persecution, or hide her light forever for her own protection.

Mialie, in fact, experiences a conflict very similar to the story of Terra in Final Fantasy VI, complete with the potential shocking reveal of powers at a critical time in the presence of a stunned noble. I say “potential,” because, of course, this is a CYOA book. It’s possible for Mialie to do nothing at a critical moment, and hide her powers. This, however, leads to one of the book’s worst possible endings:

…suddenly, a thousand ants storm forward, swarming all over Shaw, all over you, and you feel hot stings on every part of your body.

The stingers are pricking at your skin like knives. You scream out in pain, wondering when the poison will take you, make you drowsy and weak.

You wonder what would have happened if you had decided to cast a spell. But it is too late, you feel consciousness slipping away. Shaw’s eyes close, then yours, too. All is dark except the glowing embers of ant eyes.

The two Heart Quest books that I have are both written by Linda Lowery. These two books have some thematic commonalities. A moral reinforced in both books is that the main character should always be an active force in her own life. It’s hesitation or passivity that will lead to defeat in these stories. If the heroine believes in herself, trusts that she is smart and capable, and takes action on her own, she is going to succeed. If she waits for a man to handle problems for her, she inevitably will fail in her quest.

The book Moon Dragon Summer features the adventures of the titular Summer, who is a girl of the fighting-woman class and excellent with a sword. Her quest is to defeat the other title character, the evil Moon Dragon, and save her village from the blight and terror that it spreads. However, it is possible for her to give up, and allow a handsome knight to take up the quest instead, at which point…

“I shall return tomorrow, milady, triumphantly!”

He rides off, his silhouette graceful against the backdrop of the mountain. “I hope so, Sir Euston,” you murmur. “But I’m afraid I’ll never see you again.”

And you are right. The next day there is no word from the gallant knight. But as the moon begins to rise, the dragon strikes again, this time destroying half the Hollow, leaving deadly trails of pink dust in his path. And you know that even if you pack up your sword and sunbeams again, it is too late.

You reach another one of the books’ rare bad ends.

The tagline on the front of each book says “Pick a path to romance and adventure.” The books do contain an equal helping of both of these, with plots that center on perilous magical quests. As shown with the scene where Mialie is defeated by ants, the books don’t shy away from horror or violence if the situation calls for it. But of course, there is a good helping of feminine coding: talking songbirds, fields of wildflowers, elves dancing by firelight, and handsome suitors. Secret Sorceress includes an extended sequence of riding wild horses, because of course it does, girls. If it seems like I’m picking fun of this, by the way, I’m not. It’s wonderful. 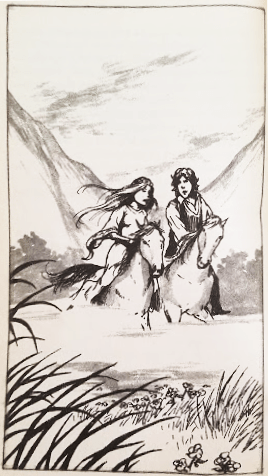 Each book has a total page count of around 150. Keeping in mind that the stories are also interactive, this isn’t a lot of space for a love story to develop that feels particularly natural. The romances tend toward the “love at first sight” variety, and focus around only one central male character. Any potential love triangle situation is extremely short-lived. Mialie has known the prince, Shaw, for all of two days in some story paths, and so her declaration of endless love to him comes across as perhaps a bit premature. Of course, this is also very common in fairy tale stories, and that rushed feeling can occasionally plague even modern romance games and stories.

Still, for their small pagecounts, the Heart Quest books contain a fair amount of plot twists. There are some characters who simply won’t be encountered on certain paths (Summer’s quest might include rescuing her amazing grandmother from the Moon Dragon… or not!). There are surprise appearances from D&D monsters such as dragons and doppelgangers. There’s also a little bit of psychosexual imagery. Or perhaps my adult mind is overthinking the innocent concept of Mialie’s magic pearl joining with Shaw’s magic sword to unite their two kingdoms for eternity…

The books have bad endings, as mentioned, but they feel fair. Arbitrary player deaths were common in CYOA books targeting boys, which would typically rate higher than Heart Quest on Andrew Plotkin’s Scale of Cruelty. What prevented the more pure CYOA books from being the highest levels of cruel was that an “undo” action was just a page turn away. The Heart Quest books are, however, not as cruel as even that, as it becomes obvious quickly which choices are the right sort to make. Try, and you will succeed; only doing nothing leads to a bad end. I suppose purists could make the argument that winning in the Heart Quest books is therefore “too easy.” But having a choice system with an internal logic to it is flat-out better game design than just killing the reader/player at random.

These two books are a piece of history that I’m thrilled to have in my Dungeons & Dragons collection. I’m going to make an effort to collect the other books in the series. They’re entertaining reads, lovingly illustrated. And I’m fond in particular of the core message. Swords and spellbooks help, but they aren’t everything. Armed with courage and confidence, a girl can be the hero of her own tale. Even if a little help from a ruggedly handsome wizard might not be turned away in the end… 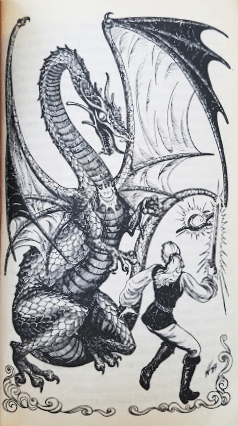 Your heart pounding, you clasp the sword firmly in both hands, the blade pointed upward. Then you stab with all your strength, forcing Streak’s sharp blade deep into the dragon’s throat.

A deafening roar echoes through the clearing, and then … nothing – total silence, as the dragon sinks to the ground. The pink mist surrounding the clearing slowly dissipates into the evening air.

Shaking, you close your eyes and feel Folc’s arm wrap around your shoulder. You turn to him, letting yourself melt into his strong arms.

“You did it, Summer,” he whispers. “You conquered the evil Moon Dragon.”

“No, Folc, not I. We conquered the Moon Dragon. We did it together.”

Email the author of this post at aj@Tap-Repeatedly.com. Or, send books.