This is just one last PAX East post to discuss stuff I didn’t discuss before. The event in general, a couple panels I attended, and how the experience has evolved over the years. If that doesn’t strike you as too interesting of a hook, I can also promise at least a couple cool cosplay photos. But probably none of me. Unless that would really be a draw for you, then we’ll see what we can do.

At PAX East I attended a few interesting panels. Jonathan Blow gave possibly the best keynote (“Storytime“) that I’d ever seen at a PAX, talking about not the games he’s made, but games he’s played recently that he finds an inspiration. “My First Pixel” was a sort of reprise of the “my first game” panel I attended a couple years ago, this time with different folks talking about the first games that they developed. “Adventures in Game Writing” was a great look at what the job of doing the writing for game – as opposed to writing about a game – was really like, with writers from board games, card games, and video games all on stage.

I didn’t feel the panels were quite as crowded this time as they were in years past, or at least, maybe not the panels I personally attended anyway. There were a few panels that were outright mobbed, though. The long line to see Markiplier’s panel made me realize my age. 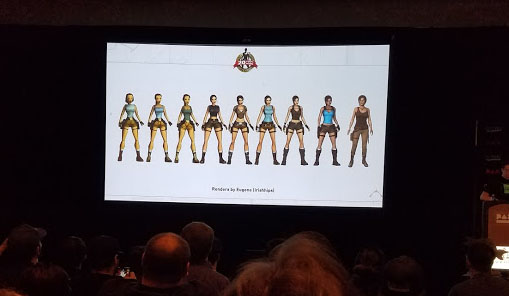 I’d say the panel I had the strongest feelings about was the one titled: Lara Croft: the Undisputed Queen of Gaming. I have a really complicated relationship with Lara Croft, which I’ve talked about a little before. But as it turns out, I’m a big fan of the latest incarnation of Lara in the Tomb Raider reboots. I wanted to check this out for a retrospective of how she’s changed over the last 20 years. Going into the panel, I would’ve totally disputed that Lara Croft is undisputed, in terms of her Queen of Gaming status. That was me disputing! But the panelists made some great arguments. She’s certainly an extremely recognizable popular culture character, and I found myself caught up in learning about her journey from big polygons to feature film star to today’s more nuanced Lara. I also met some terrific cosplayers… 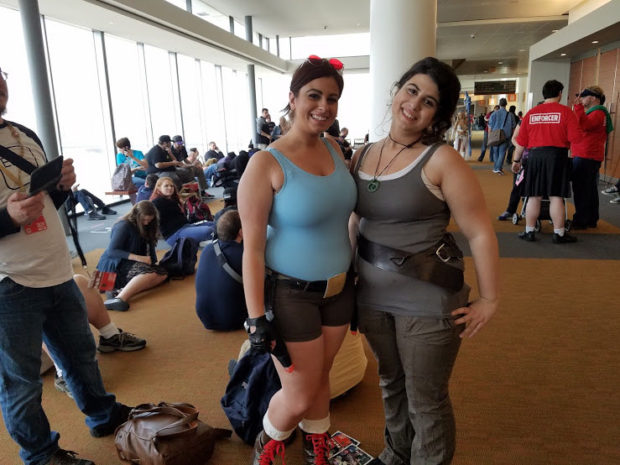 Looking in the bathroom mirror on my way out of the panel, I realized that with my own predilection toward ponytails, I certainly resemble Lara myself these days more than many other lady video game stars out there. Maybe it would be fun to give that comfy looking outfit a try? There’s a revelation a past me would disown myself for.

But that brings me to…

PAX brochures indicate that PAX isn’t a huge convention for cosplay, but I don’t generally find that to be true. I felt like I saw a lot of it, though maybe not quite as much density as one would at an anime event such as Katsucon. The amount of cosplay at PAX East (and, at MagFest) is really about my speed. Lots of small groups, a few solos, people just doing it to have a good time, and nobody seems very stuck up about it or anything. Plus, you might end up seeing some of your favorites! This awesome group really did it for me. 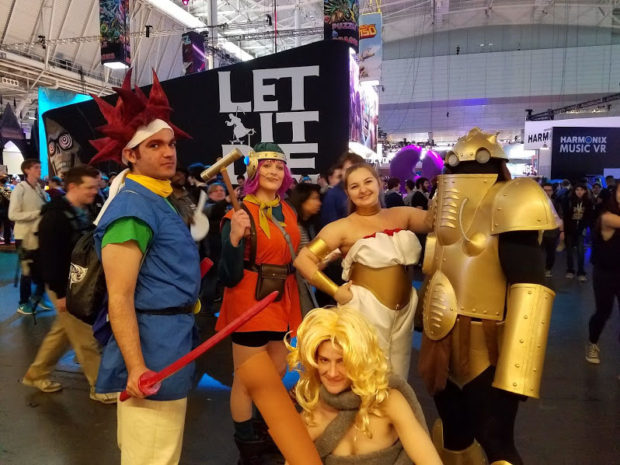 Overwatch is starting to gain traction as the new hot thing to be and it certainly had a big space on the show floor, with long lines to try out the beta and several people already portraying the characters. But that’s nowhere near the mob that I used to see at the most heavily cosplayed game in PAX…

I’m not much into MOBAs at all. Compared to 2014’s show, though, it already feels like this bubble has burst, leaving behind only the big clear winners in the MOBA space. A great change that PAX made to the show floor this year was to move a lot of their League of Legends content to a separate area, called the Riftwalk. The LoL professional cosplayers and Riot staff could mostly hang out there, have their own separate line, and keep from causing immense traffic problems on the show floor. A good change. They always do a terrific job with their show content and I have lots of respect. But the floor is busy so this helps with traffic.

Another good change is the amount of sincere effort PAX has been making toward diversity and outreach programs. I won’t write as much about this because my co worker, Adina Shanholtz, who was also my roommate at the con, has a great summary about PAX Diversity. I enjoyed reading her perspective since she was a first-time PAX attendee.

I do think they got the balance just right this time. I think the initial reception to the Diversity Lounge was a bit shaky. This time around, I heard mostly good things, and it’s good to see an event take this stuff seriously.

The Omegathon is a tradition started at PAX where different attendees of the event go head to head in a single bracket games tournament to compete for a grand prize (consisting of an all expense paid trip to a future PAX). The tournament is usually an eclectic mix of games, both digital and analog, and the final round game is left as a surprise to be announced at the very end of the show.

During the pre-PAX “Made in MA” party, I got the chance to talk for a while with Tim Rogers, designer of the game Videoball. You may recognize him as someone who writes long game reviews and editorials. Tim at the time may have mentioned something about the game being in the PAX Omegathon, but I didn’t say anything to anyone about this, I guess because I’m really a terrible journalist.

So lining up at the end of the event to see the final Omegathon round, the Penny Arcade emcees mentioned that it would be “an unreleased team multiplayer game,” and asked if anyone could guess, and at the moment, I was like: Oh right, of course, it’s Videoball. 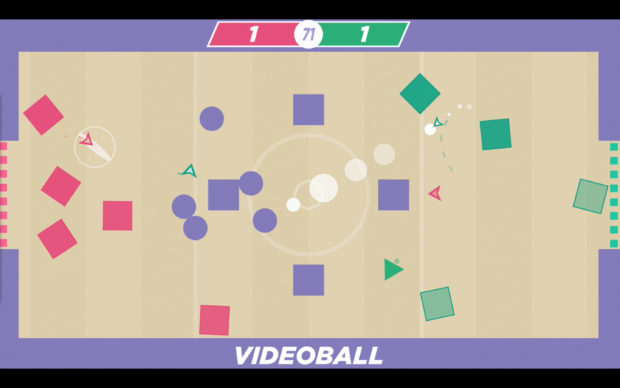 Videoball itself is a fun game. It’s fun to spectate, which made it a good choice for the last round. It’s what I might call a “Hokralike;” can we safely call that a genre yet? Lo-fi high action team multiplayer, a bit like soccer with shooting. This is a style I’d definitely compare to ClusterPuck 99 or of course Hokra. I think I actually prefer ClusterPuck right now, because it’s a little more nutty and manic, but Videoball is more… exquisitely fine-tuned. Also, it has net multiplayer, which probably took forever to code, but a game like this is more fun to me on the couch. Or on a big stage, if you can get that…

I don’t read Penny Arcade, the comic, that much anymore.

I attribute this to the fact that the creators have kids now. The comic, naturally, has drifted to being less about the experience of just gamers, and more about the experiences of adult gamers with kids… that’s fine; the world needs that, but I don’t have any kids and so I don’t really identify.

I feel like PAX has definitely become its own beast, something started by Penny Arcade but just as obviously separate from it. It’s clearly a huge moneymaker. Tickets still sell out fast. And people still do line up in long lines for the panels focused on the Penny Arcade creators, such as “Make a Strip” and “Acquisitions Inc.”

Still, I’ve gone to a good half-dozen PAX events now, and I have yet to line up for one of these panels, or encounter “those Penny Arcade guys” at all, except for watching them host the final Omegathon round. I wonder how exhausted they must be, now doing four shows a year while raising families. Four shows a year of course means four “Create a Strips” a year, in all their in-joke incoherence. They’re already making plans for PAX South and West. There seems to be endless demand for attendees to come to the events. Will there be that same demand for game companies to keep showing up? I think indies are likely to fill in the gaps here. I’m interested in seeing how the show will continue to evolve in the years to come, and curious how much Penny Arcade continues to be a part of this great big monstrous thing.

Thanks for reading, everyone! If you see me in a crowd like this, step up and say hello! 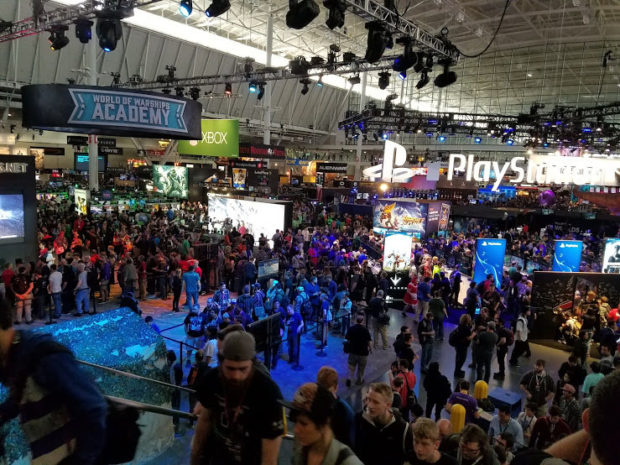