Ukrainian developer 4A Games took advantage of E3 to pre-pimp their work in Metro: Exodus, the third interactive installment and member of the growing cross-media phenomenon that began with Dmitry Glukhovksy’s brilliant novel Metro 2033. Let’s recap before the news.

In 2005 Glukhovsky was just 26, already burned out on journalism, and probably unaware of the mighty thing he was about to set in motion with the publication of his first novel. Metro 2033 is a master class in good-natured fatalism, an attitude endemic in the Russian spirit. It is so, so, so very dark: one of the bleakest, most hopeless things you’ll ever read. But despite this it is, at times, wonderfully funny, and the English translation captures the humor as effectively as it does the nihilism. Metro 2033 is a good read.

4A Games is composed mostly of refugees from GSC Game World, they of STALKER fame; much of the technical staff of GSC left in 2005 to form 4A. The divorce was not amicable, and lawsuits sprouted between the two for several years. While GSC bumbled toward the 2007 release of STALKER: Shadow of Chernobyl, 4A turned Glukhovsky’s slow-paced, philosophical novel into an action shooter. Metro 2033 the game had no shortage of flaws, but it was a powerful piece of work all the same. By the time it shipped, Glukhovsky’s novel was already a worldwide bestseller. 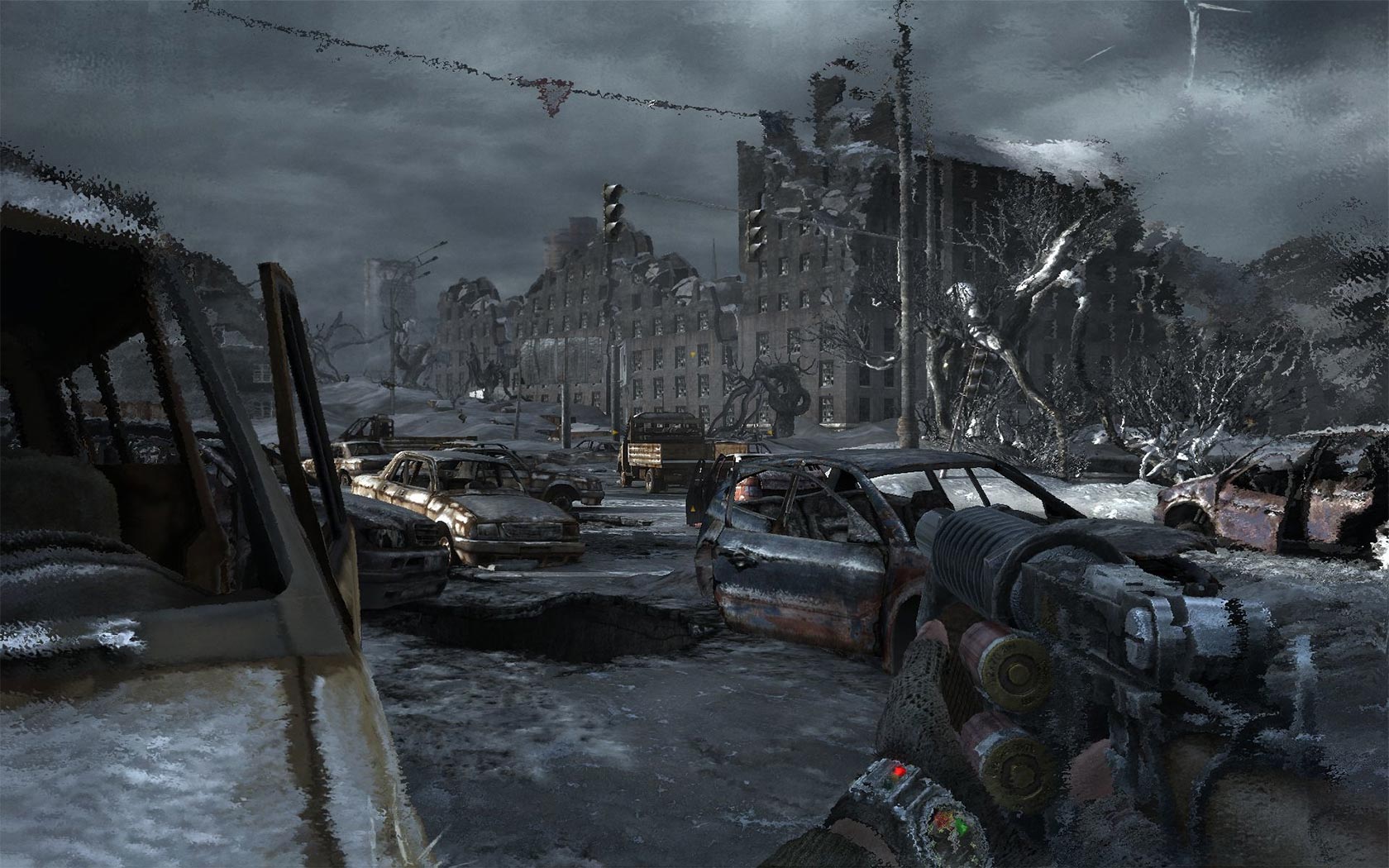 The game wasn’t a bestseller, but it did okay; well enough to warrant a follow-up in the form of Metro: Last Light.

Glukhovsky also has not been idle: Metro 2034 wasn’t really suitable for a game but is still an interesting read. Metro 2035 is a novelization of Last Light… which was a bestseller, to the great joy of 4A games. Last Light corrected most of the problems of Metro 2033, introduced some new ones, but overall was a stellar game. Both are now available in remastered editions — Metro Redux, they’re called — with further enhanced engines and improved what-have-yous.

The only complaint that really sticks to either Metro 2033 or Last Light is that neither game was what it should have been: the Metro series practically begs to be an open world RPG, not dissimilar to STALKER but perhaps better imagined as a non-zany Borderlands. Instead, both games are linear corridor shooters with the bare minimum RPG elements — none at all, really — and thus a great amount of unrealized potential.

With the announcement of Metro: Exodus, 4A has acknowledged that the Metro story, at least, hasn’t come to an end with the hard stop of Last Light; characters maybe, arc evidently not. But other than saying it’s “ambitious” (they all have been) it’s coyly avoided telling us whether Exodus will be what Metro was meant to be.

Publisher Deep Silver has said things like “vast nonlinear levels,” which frankly to me sounds like Exodus is going to be another corridor shooter. 2033 and Last Light both had vast nonlinear levels. What they didn’t have was a nonlinear structure or the RPG elements from which the series would so obviously benefit.

We’re not going to see Metro: Exodus this year; 4A is in a good cash position thanks to Last Light’s sales and has never been particularly quick on the ball when it comes to making and releasing products. 2018 is the earliest we’re likely to see Exodus. And while the engine updates shown in the video above are impressive, they also speak to the diminishing returns that such technology will bring in the future. Frankly, Last Light looked almost as good. Indeed, to a lay person it probably does look as good, particularly the Redux update, so generationally-improved graphics are just less and less attention grabbing. Eventually we’re going to hit a zero-point when games truly are photorealistic, and sequels will have to differentiate themselves in ways beyond just advancements in technology.

That’s not meant as an indictment of sequels or anything; I like sequels. In fact, I like “more of the same” if it’s a sequel to something I really adored. If it ain’t broke, don’t fix it; strictly speaking the absence of RPG-ness in the earlier Metro games didn’t mean they were broke, but — to my eyes at least — it certainly meant they weren’t able to be what they ought to have been.

Here’s to hoping the third time’s the charm. With GSC Game World vanished and the STALKER IP buried in the dead letter vault, with GSC successor Vostok Games largely MIA and its Survarium a mess of cheating and microtransactions, with Fallout good but perhaps too much an RPG to really be a suitable comparison, the Metro series is what we’ve got for radiation-addled post-apocalyptic Eastern European survival hi-jinx.

Riding on the Metro with Steerpike@Tap-Repeatedly.com.

3 Responses to Let My People G-OHGODWHATISTHAT

Wow, I Was NOT Expecting That: Killzone Edition

Side by Side: Gang Beasts, Abyss Odyssey & Season 3