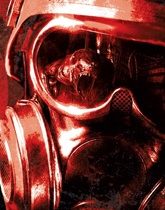 “The good parts are as good as it gets in an FPS, but the overall experience is tarnished by a handful of missteps “

In Metro 2033 you play the part of Artyom, a young man living underground in one of several inhabited Metro stations in the aftermath of a nuclear apocalypse. Strange new creatures have been attacking the human stations and Artyom is sent to seek out answers from the friend of a ‘Hunter’, a character who spends the majority of his time outside. The majority of game play is spent moving through the Metro tunnels and Moscow itself.

The game was developed by 4A games. I’ve read that this group splintered from GSC during the development of the original S.T.A.L.K.E.R.. There are graphical similarities between the two games and one of your guides mentions S.T.A.L.K.E.R.S. while you’re exploring above-ground Moscow, but the games could hardly be more different. If S.T.A.L.K.E.R. could be categorized by the inhumanity shown between inhabitants of the zone, the human world of Metro 2033 is generally a pretty warm place. There are people with aggressive interests but the metro stations at the beginning of the game felt pretty welcoming in contrast to the dangerous darkness of the tunnels or the sere landscape on the surface. 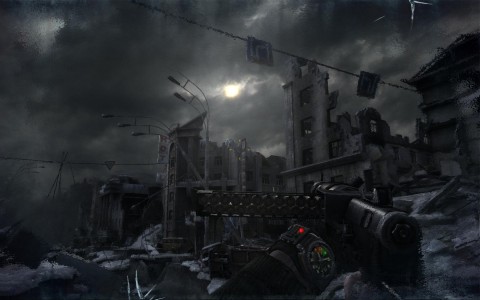 Aboveground Moscow is bleak and grim

The game begins with a number of first person cut-scenes to establish the story and Artyom’s position in the world mixed with a little bit of action: not a tutorial exactly, but simple encounters with some creatures and weapons with the ability to wander the station eavesdropping on several conversations. The voice acting is a standard Russian accent over English and provides a somewhat familiar feeling background for the story. You also get a chance to investigate the marketplace. The money system seems like it should make sense in this world. Cash is gone, the only thing that has any real value are prewar military rounds. The ammo you find on the corpses littering the landscape has been watered down making it less powerful and not directly a trade able item. Currency kiosks allow you to trade one type of ammo for the other, for a price. It is a shame that you really can’t afford much in the first station as this left me somewhat confused and you don’t have enough of any type of ammo to trade to make any kind of significant purchase. The exchange booth user interface is a little bit confusing as it depends on the ability to read ammo gauge markings off the bottoms of casings or to recognize a quite subtle colour difference between the military and working shells but that’s easy to get used to and with time you’ll be able to spot the military shells by their colour as they lay on the ground.

After you’ve wandered the opening station, you’ll set off on your first mission. Purportedly, you’re delivering an aid package to the next station, but you know that you’re likely on a one way journey with no return. You rarely travel alone in Metro 2033 as you are often accompanied by an experienced guide (with one reputation or another) who fills in a bit more details of the world as you travel. The missions start fairly simply as you travel from station to station and get more involved and your life gets more complex as you progress. These early levels are simply tremendous. The tension level, for me, was perfect; never so serious as to be off-putting, yet I was always seemingly scrabbling along trying to keep up, trying to find everything, or just trying to stay alive. Combat is a mixture of assaults by groups of freakish mutants mixed with stealthy encounters with human bandits or ideological factions trying to expand their sphere of influence. The stealthy sections can be very engrossing with traps and noise makers catching out hasty movement. Attacking a well defended, booby trapped station using a combination of stealth and (eventually) aggressive combat was as much fun as I’ve had in an FPS, period. 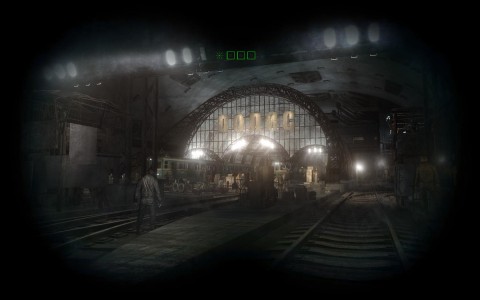 An intermediate destination is bright and welcoming

The corpse pat-down system was so rewarding I feel guilty for mentioning it. Mousing over a corpse brings up a little image of the ammo type you’re about to pick up, and picking it up triggers a little physics animation in the body and an appropriate sound effect. This system was so satisfying that I spent a lot of time dying because I was too busy looting when I should have been, heh, shooting.

On a scale of one to ten where one is a linear pathfest and ten is an open roaming sandbox world, Metro 2033 is firmly a one, or even a 1/2. There are no side missions to speak of in the traditional sense. You get asked to go off and block a tunnel or find a way round to open a door by flipping some switches to restore power but the range and extent of these side trips are laughably short. In this case, however, this isn’t necessarily a bad thing as the story that’s presented and the epic trip you eventually complete are completely engaging. I felt a lingering background tension when I was never quite able to poke around and just look, instead often feeling pulled along in my narrative guide’s wake.

So what keeps this game from getting the golden Amoeba 5/5 rating? Sadly, I think the game goes slightly awry in some of the mid-latter levels as the developer’s fondness for taking control of the viewpoint becomes overly intrusive.

First, there are a couple rail shooter levels (literally!) which feel out of place after some of the earlier greatness. A perfectly linear level is OK when the player is still required to find the path; when he/she is filled with nagging doubts, doubts about decisions made or doubts about the path chosen. I think it’s well done when a map maker both provides enough information to guide the way, yet allows the player doubt as to whether their choices are correct and I think Metro has this quality early on. A rail shooter level is the exact opposite of this, with the replacement of uncertainty with the simple execution of some skill. I found the transitions between level types jarring.

Then there are several levels where the only hope for survival is to accompany your guide through a scripted sequence regardless of tactical considerations. In one section, I was supposed to cover the back of my guide as we cross a courtyard while being attacked by a couple dozen creatures similar to the Snorks from S.T.A.L.K.E.R. Breaking and running for cover results in immediate death, and the solution is to walk slowly across the yard stopping at each of seven developer designated stops and deal death to the demons metered out there. The troublesome part is that it’s not clear that you’re dying for anything other than tactical reasons which leads you to reload and try again. And again. 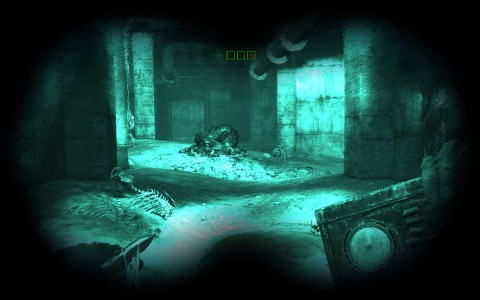 Try to avoid stepping on the skeletons

The third type of problem is the way the first person cut scenes are inserted directly into the action. I had thought the industry had settle on a pretty standard for the format of first person cut scenes lately. When you get to a point where a little narrative is called for the presentation starts, the player (the watcher) chills out – takes a break for a moment, hopefully watches and enjoys, and waits for the ominous music indicating resumption of control or the jump to the level loading screen.
Metro goes beyond this framework with (at times frequent) relatively short camera face grabs in the middle of live action. In one section on the surface in Moscow, I’m following my guide as we jump across a series of car hoods getting across a river. I fail to make the jump but instead of the normal first person view of me sliding down the bank, I get the five second cut scene of my guide’s desperate attempt to grab my wrist to pull me clear followed by resumption of ‘play as normal’ and my having to navigate the long way round. This is bothersome because I’m playing in good faith, trying to follow along when it’s clear that the dev’s had already determined that I must fail, since they spent the money doing the cut scene. I don’t like spending time/ammo/attention when the outcome has already been decided. They also get downright annoying when the frequency ramps up near the endgame. 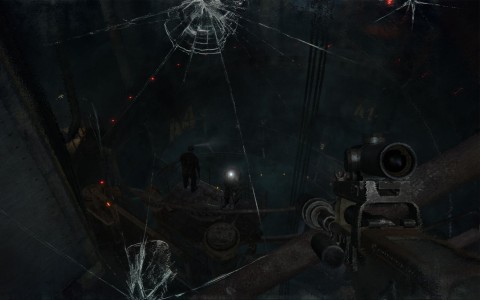 The perils of silo living

Weapons are an interesting bunch of home-brew guns including various pistols and shotguns with the odd prewar AK-47 variants available later in the game. For the stealthy, there are some pneumatically powered weapons such as an arrow rifle and a lethal pellet weapon. Inventory consists of weapon slots as in S.T.A.L.K.E.R. with a few extra slots for throwing knifes, sticky bombs, and dynamite grenades. The game presents the ages old conundrum of going with a stealth mix or the all out aggression package. Stealth has its place to a point, but it’s presented as an opportunity to confuse the enemy rather than the ability to avoid combat altogether. Still, Dark Lurker types will get a few chances to scythe through enemy lines silently and I thought this was well done.

The UI for the weapons is a little unconventional and it’s both useful/clever but at the same time it feels a little too cute. You press ‘F’ to turn on the flashlight, and you hold ‘F’ to bring up the flashlight charger. This is clever because the related functionality is tied to the same key, but under pressure I frequently brought up the charger when I just wanted to see what I was shooting. Similarly, the 5 chamber shotgun has some strange reloading modes that I haven’t figured out even after my second play through. It’s something like pressing ‘R’ loads only couple rounds while holding ‘R’ reloads fully. The upshot is that when I most desperately needed it, it was always out of ammo and I was running and dodging while always watching the reloading animation. Period.

Graphically the game looks good enough. I only have options for DX9 but even with a limited CPU and graphics card the graphics were satisfying. Level load times were entirely acceptable even with my outdated system.

I should mention value, I suppose. I played entirely through the game twice in a span of three weeks, having bought the game Thursday evening and finished it up on Monday afternoon. This isn’t Dragon Age: Origins or Fallout 3 by any conceivable measure. I’m sure I’ll play it a few more times before I’m completely done. While $50 was maybe a bit steep I don’t feel particularly cheated. It’s a heck of a ride. 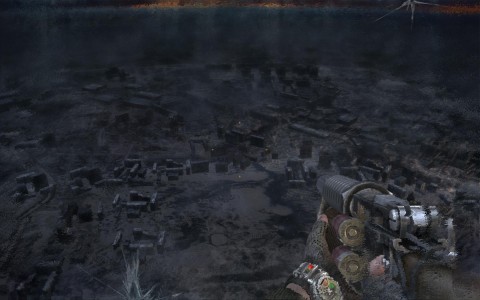 In summary, the aforementioned issues are present but they are reasonably rare. Their presence however, brings my score down to the “thumbs up” 4/5. In my second play through when I wasn’t quite so worried about running out of air (etc.) I was reminded of the epic journey that you undertake. You will see and do some incredible things and the ending is very satisfying.

Email the author of this review at helmut@tap-repeatedly.com

Obviously, my system is barely at the minimum system specs but I found it completely playable at medium detail levels. Auto-detection started me off at high which was fine until several creatures were on screen at which point I was lagged to death.