When I was a teenager I once dressed as Princess Zelda for Halloween.

This was in the Link to the Past days, before Zelda became a ninja, and before cosplay was quite so mainstream. My costume was nowhere near as complex as the outfits I see at modern cons. I just had a simple long dress, pink, which my mother sewed for me. I dutifully used fabric paint to paint Hyrule crests on it, made pointed ears out of cosmetic wax, and wore a necklace on my head as a crown. I used metallic gold acrylic to carefully paint a Triforce symbol on the back of my hand. I made my little sister be Link.

Zelda may have just been a princess in a crystal in those days. But she was still a powerful character in my imagination, in a way that retained her femininity. She was the holder of the Triforce of Wisdom, skilled at magic and archery. She could run in the forest with the hunters and the deer, or sit in the mystic library with Athena’s wise owl. She was brains and beauty at once. The perfect icon for an awkward lady nerd. That meant something.

Let’s face it: Smash Brothers, even if you love it, doesn’t scratch the itch exactly. There’s a longing, not just in me, but among many gamers, to play as Princess Zelda in a real adventure.

And now, with Hyrule Warriors, I finally had some ghost of a chance.

When I put the game into my new WiiU, I was already anticipating it. I flashed back to my childhood, keeping my hand steady as I painted on the little Triforce because it was so important to my costume. I can be Zelda. I am Zelda.

…Goddamit, I’m still Link? You have to unlock Zelda?!

Hyrule Warriors, you had one job. 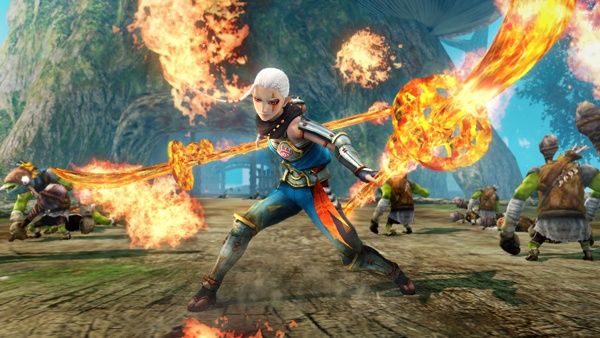 Okay, so. Deep breaths. Hyrule Warriors isn’t a Legend of Zelda game exactly. You probably know that already. It’s a Dynasty Warriors game starring Zelda characters. When I booted it up, it asked: do I want the Zelda style controls or the Warriors style controls? I didn’t even know what the difference was. I’ll take Zelda, I guess: thanks!

Thus follows a game of mass combat and light strategy. Mountains of unlimited enemies pile in hoards to get chewed up by your weapons and magic, and their destruction paves the way for a game of territory conquest. There’s a giant enemy spider, and you attack its weak point for massive damage.

Hyrule Warriors, though using a Nintendo IP, was developed by Koei Tecmo’s Omega Force, typically responsible for Dynasty Warriors, and by Team Ninja, who has seemingly settled into a role developing the occasional “dark serious” game title for Nintendo characters when Nintendo’s own slightly more G-rated sensibility will no longer sustain the attention of older gamers. It stars Link, Zelda, their very cool supporting cast members from other games, and Lana, a new character that doesn’t belong.

Every character other than Link has to be unlocked to be playable, but the first few unlocks are at a rapid pace. Sheik unlocks pretty early really, so playing as Zelda doesn’t really take too long. It’s not quite the same though. You understand. 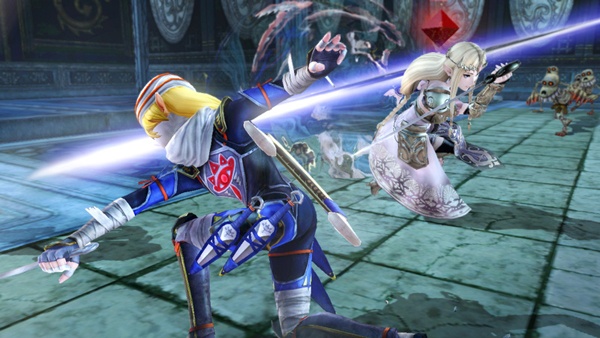 A fun thing in the story mode is that everyone in-character doesn’t know Sheik is Zelda. But you know that, obviously. That is not even a spoiler. But the game pretends like you don’t know that, making no use of dramatic irony what-so-ever until the reveal of the thing we already knew. I know the Japanese must have some concept of dramatic irony because Sailor Moon exists, but Hyrule Warriors does not make elegant use of this device.

Another fun thing in the story mode is (I guess this is a spoiler, sorry, you can skip this paragraph? It’s pretty minor/evident from game marketing…) that you think it’s over, but then you start playing the game as Ganondorf. Which puts you in the weird position of trying to sincerely kill Link and Zelda, cussing and screaming at them, before flipping back and trying to actually kill Ganon. The game also has another villain, the sorceress Cia, who was obviously designed by Team Ninja in such a way that the camera makes sweaty uncomfortable love to her anytime she walks onscreen. She unlocks as playable the minute you boot up the game, though (via a free DLC patch) which is jarring. 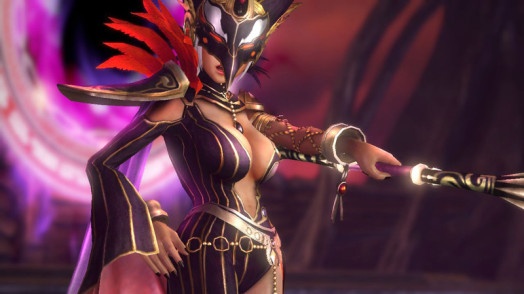 So the story mode (called Legend Mode in the game) is kind of wacky. That doesn’t matter too much for the following reasons:

It, however, matters a little, because:

After completing maps in story mode, the maps unlock for Free Play, where you can play the map using any character (even, for example, villains that you’ve unlocked). But the game treats this as if the plot that the story mode implied for the map is still going on, making for a jarring experience, where for example Zelda is yelling at Link to help her but you’re actually playing as Cia. I don’t really care too much about Free Mode.

The other two play modes are Challenge Mode and Adventure Mode. Challenge Mode is about taking on special maps with specific parameters. Adventure Mode is probably the most interesting mode, where a map that resembles the original Legend of Zelda sprawls out in glorious pseudo-8-bit, full of different challenges for characters you’ve unlocked and new weapons to uncover for them. Adventure Mode is the game’s most expansive mode, and there are DLC maps for it to continue it if you should happen to exhaust it (I haven’t, yet). 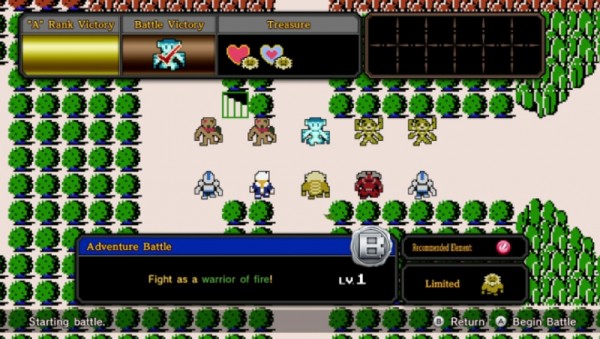 Because Legend of Zelda as a series has no lack of interesting female characters, lots of the characters to pick from are kick-ass women. That is pretty great. (I guess the male characters are fun too, but I always favor ladies.) I can still think of many favorites I’d love to see included (I’m a shameless fan of Ashei the yeti-hunter from Twilight Princess) but DLC is still dropping and adding more to the roster. Midna, Ruto, Darunia, Agitha, Impa, and more are all fantastic to see already.

Most characters have more than one weapon choice for a variety of different ways to play. Weapon effects are fun, too: over the top, colorful explosions and slashes decorating everything onscreen while the little monsters caught in their wake shatter to bits. The combat isn’t really super-strategic and you’ll get the hang of most techniques quickly, but I find that a good thing. Balancing weapons and items doesn’t have a huge effect on play as long as you play consistently to level characters up. Nevertheless, it’s fun to have options to mess with, even if it just means your blue explosions are now red explosions.

I’ll talk about Lana one more time: she’s fine, I guess, but they could’ve just given her combat style and level map to Saria and had her in the game instead. Then I wouldn’t have to keep thinking “why is this new person here again?” The story rationale behind Lana’s existence is kind of batty. It’s not a deal-breaker to have her in the game, but she comes across as a fan-fic Mary Sue where the game doesn’t need it.

That’s really just a quibble, though. My most sincere complaint about the game is about its boss fights. During story mode, Hyrule Warriors gets a lot of mileage out of the introduction of some giant boss type enemies: King Dodongo, the afore-referenced Gohma, and so-on. They’re exciting to fight the first time, but the bosses continue to show up on other maps in different themed challenges, along with their dramatic intro cutscenes. This gets old pretty fast. I’m not sure what the solution is here, but it’d probably be a combination of “add more boss variety” combined with “stop showing the dramatic cut-scene the third subsequent time I’ve fought the same boss.” Yes, these scenes are skippable, but the game should just assume I want to skip a scene after a certain point, really. 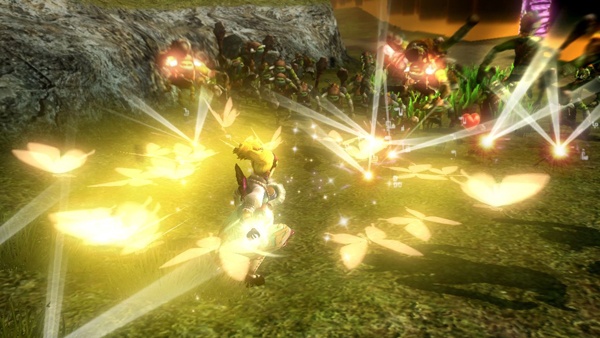 I’ve accidentally lost a couple of late nights to Hyrule Warriors, because of the powerful compulsion to play “just one more map.” Sometimes I’m saved by the battery life on the WiiU controller. So in spite of the few things I’m iffy on, I’m pretty sure I love this game. You may get less out of it if you are not a long-time Zelda fan. But I’d guess the urge to swing around a tree branch and send hundreds of little crunchy skeletons flying around the screen is universal.

I think I’ve discovered, based on the themes of many of my reviews, that what I personally want in a video game is hot girls and lots of fiddly menus. Please be on the lookout later this year for my new indie game: Hot Girls Fiddling With Menus Simulator 2015. If possible, Zelda will be playable.