Do you love learning about upcoming games and their developers? Well… you know the drill by now! I talk to developers on the East Coast who make neat things, and ask them stuff about their neat things. I caught up with several developers at the IndieCade East event in New York City last weekend, so for the next few weeks, I’ll be discussing projects out of New York City, Baltimore, and of course my home town Philadelphia.

I’m going to start off covering my IndieCade East finds with Extreme Exorcism, a game by Golden Ruby Games. I sat down with game producer Mike Christatos in the IndieCade East Esports arena to ask him a few questions. And I got to try out the demo right there on his laptop, pure indie developer style.

Extreme Exorcism is a paranormal pixel-art platformer. In single-player mode, the object of the game is to clear out entire rooms of ghosts in a kind of puzzle combat. In single-player, the player takes on the role of action exorcist Mae Barrons. Weapons spawn (from a list of about twenty different weapons ranging from swords to rocket launchers), at random in an arena-style stage. Mae picks up the individual weapons and defeats a ghost. In the next, subsequent rounds, the ghosts that spawn will take whatever actions Mae took previously. First, there’s only one echo ghost… then more, as the game layers your old actions back at you in sequence.

“You’re your own worst enemy…” said Christatos, before laughing and correcting himself: “‘Everything comes back to haunt you.’ That’s the one I should use.” To move on in a round, the player has to defeat his or her most recent ghost actions, though defeating other ghosts adds points. Once there’s five ghosts in an area, an Extreme Exorcism power-up will appear that allows Mae to suck up the ghosts and defeat them for good. 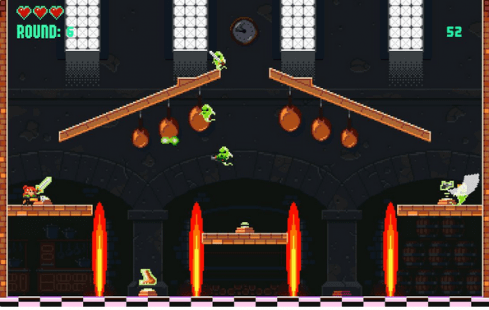 Golden Ruby wanted to keep the gameplay simple and intuitive, so Extreme Exorcism only uses two buttons, “NES Style.” Though an exorcist can use more than one weapon at once, all weapons on hand fire at the same time when the attack button is pressed. That makes it simple to understand how to attack, but also makes it quite hectic once ghosts with multiple weapons start mimicking your old actions…

Initially, the game was based around just the idea of the single-player, and Mae’s adventure. But Golden Ruby realized that a four-player mode would be a great hook, especially if they planned on taking the game to shows and festivals. In Extreme Exorcism‘s death match mode, ghosts are only created for the winning players. Your ghost will only hurt other players, not you, becoming a kind of automated team member. To prevent this from causing a feedback loop that makes it too difficult for people to catch up, players with lower scores enter the battle arena first, and have a prime chance to collect up the spawning weapons. If a player ever gets really behind, the Extreme Exorcism power-up will drop in for them to turn the tide. 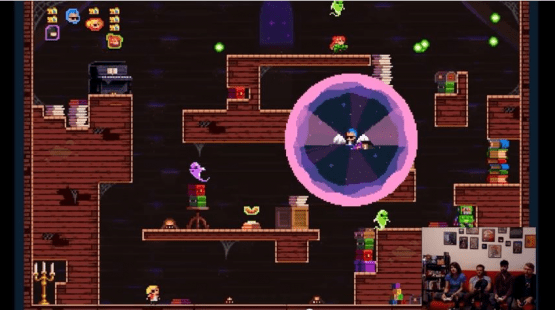 In multiplayer, Mae is joined by her sister Sylvia Barrons, and their friends Ace Blade and Mikoto Itako. It’s an odd remark, I felt weird saying it, but I had to point it out, anyway: Extreme Exorcism has four playable characters, and three of them are women. “If it were the other way around, no one would question it, right?” Christatos asked. “I believe being a female is not a personality trait. It’s just a gender, like others.”

Other than Ace Blade, the names are based on puns around ghosts and ghost films. Mae Barrons’s name is a reference to the characters Oda Mae from Ghost, and Tangina Barrons from Poltergeist. Okay, so where do you come up with a name like “Ace Blade?” Christatos said he got the idea from his boyfriend, who, as he explained it, was almost actually named “Ace Blade” as a child by his dad. Christatos said after hearing that amazing name, he knew he had to use it as a game character somehow.

The pixel art that makes up the game’s haunted levels is another stand-out. Each level style has a different obstacle for players, like the bouncy beds in the bedroom, or the piles of junk in the attic. The level art contains a lot of hidden visual references and Easter Eggs. I couldn’t help pointing out Mr. Destructoid hiding upu in the attic.

This isn’t the only time I heard this at IndieCade East: though producer Mike Christatos is in New York City, the game is being developed by a distributed team all over the country. The pixel designs are by by Johan Vinet, with UI design work by Jason Boyer. Andy Wallace is the lead programmer and designer on the project, and sound design is by Nathaniel Chambers, a former New Yorker now living in LA. Technology allows the team to work together and stay connected. 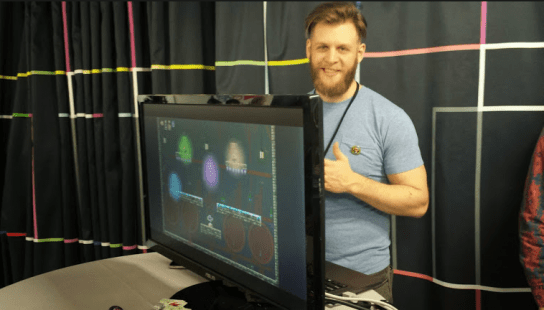 Extreme Exorcism is being published by the UK-based Ripstone. I asked Christatos, in an era when a lot of indies like to go it alone and self-publish, what influenced your choice to work with a publisher? He said that working with Ripstone has been a great experience. The development team wanted to concentrate on the game, so having a publisher helped them to make the business deals that would normally be a distraction from development. They also helped get them ready to launch on consoles, so Extreme Exorcism will be coming to Xbox One and PS4, as well as Steam. Being able to skip over the Greenlight process was another nice advantage, and they’ve provided some additional exposure, too. When you’re a first timer on a console, Christatos said, “it counts to make a name for yourself.”

If you want to give Extreme Exorcism a spin before launch, the game will be at the GDC and PAX East Megabooths as well. Thanks to Mike for sitting down with me to chat and deathmatch!