A new year brings some new editions of my Local Flavor series, where I talk about and with local game studios on the east coast, especially indies, and especially around my home base of Philadelphia. In this article, I’m chatting with local shop QuadraTron Games, a team that works out of the Philly Game Forge co-working space. My questions were answered by studio head programmer Zenas Bellace, who moved into game making full time in 2013, with a little input from the rest of the studio. Q&A after the jump!

AJ: Tell us about the projects Quadratron has done in the past!

Zenas: We created a game called Monsters! which was released in March of 2013. It was a retro pixel art game inspired by the classic dual stick shooter Robotron 2084.  The development of Monsters! was partially funded by a successful Kickstarter campaign. While the game is currently available from a variety of online distributors such as Desura, the Windows App Store, the Mac App Stores, and itch.io, it was recently approved for release on Steam. As a result, we are going to look into developing a new version of the game, Monsters! Reborn! for a special release on Steam. The game will be made available as early access to start, with development on the new version taking about six to eight months.

AJ: Your new game Threshold started out as a Global Game Jam project. What made you decide to pursue it further as a game?

Zenas: We received a lot of positive feedback for Threshold after the jam. As a result we were inspired to jump back into development of the game so that we could work on a more polished prototype version of the game.

AJ: What kind of evolution has Threshold gone through from the Game Jam to what it is today?

Zenas: The first thing we wanted to do was refine the game’s art style. Our artist Mila has been working really hard to create a unique look for the game that is greatly inspired by the works on Mary Blair and Gustav Klimt. What we’ve come up with is a beautiful hand painted look and feel to the game that we feel will capture player’s imagination. Additionally, we’ve been talking a lot about how to refine and improve our core game play mechanics. We have a lot in store for the next build of the game.
AJ: What advice would you give first time game jammers? What do you like about game jams and what do you get out of them?
Zenas: The best thing about game jams are the connections that you make with other game jammers. The network of game developers and friends that result is hugely invaluable. It’s not so much about making an awesome, well polished game as it is about getting to know the people who you will continue to develop games with over the years.
AJ: How has your work environment helped with this process? What’s it like working in the Game Forge and how did you make the transition to developing in a co-working space?
Zenas: Working together in the same room is a huge benefit to our creativity. Being able to bounce ideas off of each other and get almost instant feedback on our work greatly improves our productivity. This isn’t always available to new developers so we are very grateful that we have the opportunity. 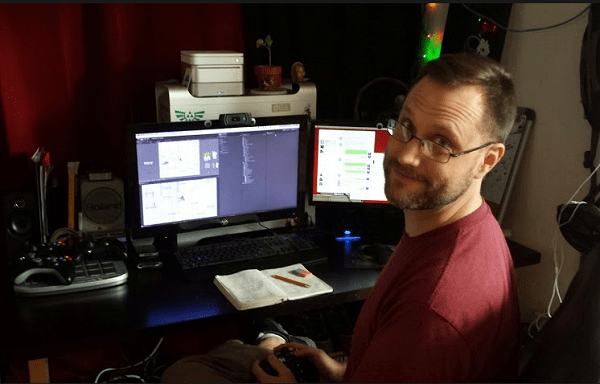 AJ:  One for all team members – what would you say your favorite 2D platformer is? Why?

Zenas: Braid is probably the most influential platformer for us in regards to our development of Threshold. I’m also a fan of Rayman for it’s beautiful environments and fun gameplay.  Mila loves the classic Spiro the Dragon for it’s inviting universe, lovable protagonist, and a lot to explore (oh and also DRAGONS!). For Christian it’s MegaMan X; he played it until his fingers bled, or so he claims. It takes everything that made the series good, built upon it, and took out many of the weaknesses. Woody is a big fan of Super Mario World.

AJ: All great choices! Any kind of genre of game you’d love to work on in the future?

Zenas: We would love to work on a local competitive brawler style game sometime in the near future. We love playing games together and nothing is more fun that beating the pants of your friend on the couch in my book.  😉
Thank you to Zenas and everyone at QuadraTron for answering my questions. You can look at the Kickstarter for Threshold right here!

You can email the author of this post at aj@Tap-Repeatedly.com. She already broke her New Year’s Resolution of not backing so many Kickstarters.

One Response to Local Flavor: QuadraTron Games and Threshold

Tap vs. Tap: Xbox One

…And a Stick to Steer Her By