So: now you’re thinking with portals. In the technical sense.

A portal is a functional element used in the Unreal Engine and other engines like it. It’s not exactly the type of portal used in the game by the same name. Really, an engine portal is kind of a barrier, which a designer can put between two locations in a level to mark a seamless transition between one area and another. Game engines can then use these demarcations to save memory. They do this by culling from the frustum, which is my absolute favorite game development phrase that sounds like it is complete nonsense but actually really means something. The “frustum” is the rectangular flaring area that comprises your viewport onto the first-person world. “Culling” means to remove. In essence, in a 3D game engine, if you can’t see it, it may not be there at all. Using this technique, a level designer can move seamlessly to new areas while erasing areas that have been left behind.

With Antichamber, indie developer Alexander Bruce and his small team basically pushed this technology to the next level. If the engine can be told to cull away what I can’t see, this can result in folding impossible spaces inside one another. Antichamber dares to ask: is there a way to make that the entire game? 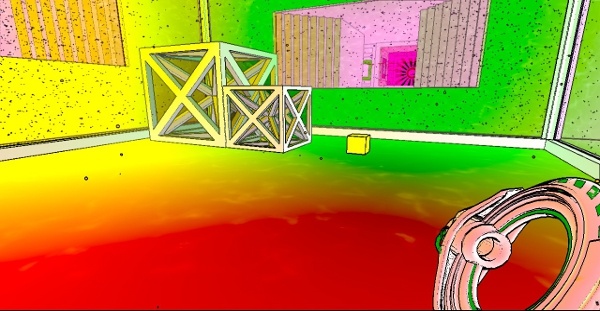 And the answer is… well, no, not really. It needs something else to be really compelling. Action elements could’ve worked. But the Antichamber designer decided to forgo that for more peaceful puzzle-solving, so the environment could be the star. The result is a game that’s somewhat comparable to Fez or Braid, a series of environmental puzzles that can be solved in a non-sequential order. It’s set in a world that’s constantly changing around you, where, if you can’t see something, you can be almost certain that it isn’t really there.

The idea of a maze that constantly changes around the player isn’t a completely new one. Legend of Zelda titles, going all the way back to the original, have The Lost Woods areas. These forests defy navigation and loop in impossible ways unless the player knows the secret to traversing them. Playing Antichamber is like walking through The Lost Woods all the time. Sometimes an area will seem to repeat itself indefinitely. Sometimes you’ll turn around, and the room behind you isn’t the room that you walked through to get to the spot you started from. Sometimes you’ll fall for what seems like forever, but then walk up a short flight of stairs to return to your origin point.

It’s kind of nifty. It might blow your mind a little bit if you didn’t know how it was done, but, oops, I ruined that for you already! I will say my explanation is simplified, but, I mostly just wanted to have an excuse to use the word “frustum” again. Such a great word. Anyway. 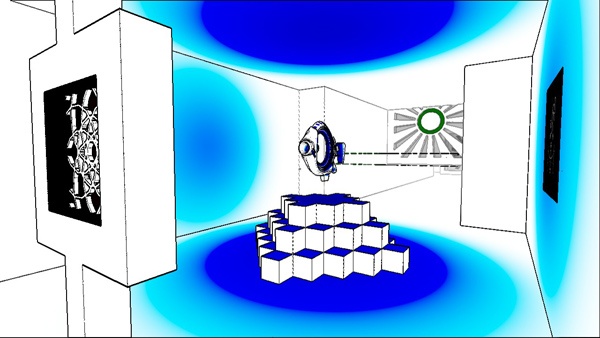 A problem with the very concept of Antichamber is it’s really difficult to make puzzles out of a world of inconsistent logic. A problem can’t really be solved if the rules are impossible to internalize. So most puzzles in Antichamber don’t really revolve around environmental manipulation so much as they involve manipulating more prosaic things.

Okay, mostly actually blocks: sometimes large blocks that you can push around to stand on or counterweight things, but, more frequently, little blocks, which you can fire out of a block-manipulating-gun you find in the maze. There are different colors of blocks, each of which behaves with a reasonably-consistent set of physical attributes (except when they don’t; I never did understand why some green blocks disappear forever while others constantly regenerate). Note that color and only color differentiates the block types, so this game may be difficult for some colorblind players. Even I had trouble telling the pink and yellow fizzler fields apart at times.

There were a few times I checked hints playing this, and I never regretted it, since that was preferable to banging my head against certain puzzles for another hour of time. Antichamber makes the mistake of requiring precise execution as well as problem-solving for several of its puzzles. It’s difficult to aim the block-shooting gun as it is, and this screwed me up several times when I wondered if I was on the wrong track for solving a room, or if I had the right idea but was doing it wrong. 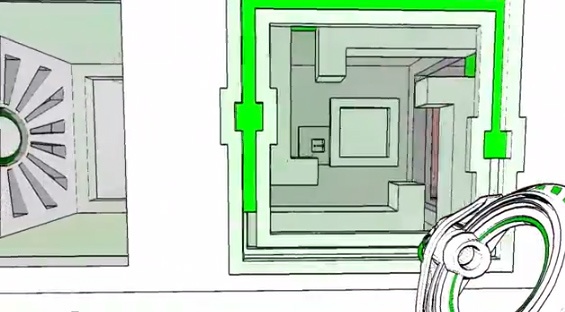 Worse than the shooting puzzles are the puzzles that involve jumping. I get that some Unreal Tournament masters out there are perfectly comfortable jumping in the default UDK setup, but it’s a challenging thing to require from someone who is here to play a puzzle game. I can’t see my feet in Antichamber, and my character is heavy. It’s troublesome when a puzzle requires me to leap to a single block that, in the real world, would be about the size of a Rubik’s Cube. And at least once, I brute-forced a puzzle by precise jumping that turned out to have an easier solution. But since several of the puzzles actually did require brute force jumping, it wasn’t clear I’d broken sequence until later when I approached the room the “correct” way.

I had over ten hours of play with this title before I reached an ending. Your play time may differ wildly. It’s very possible to play in a short amount of time if you solve puzzles faster than I do and are better at aiming blocks. My experience may have been a little diluted by trying to look too far under the hood with this one. I got overwhelmed thinking about how it was done and never got sucked into the world’s inconsistent logic or the game’s loose narrative. 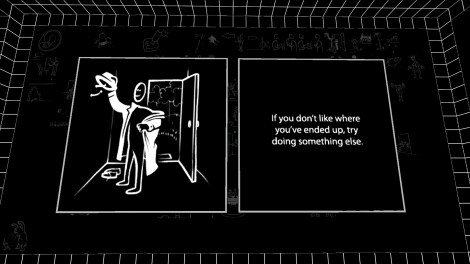 There is a kind of story to Antichamber. The game was originally called Hazard: the Journey of Life, and it’s sort of a “message” game. Right after solving a puzzle, you’ll get a little sign on the wall as a reward. Click the sign and receive a clue. Generally, it’s a clue that would’ve helped you with the puzzle that you just solved, but that also serves as a moral platitude about how life should be lived. “Try very hard and you will succeed,” or “look before you leap;” paraphrasing, but it’s all that sort of thing. I was hoping this would come together with some kind of interesting thesis by the time I reached the finale, but it never really did. To me, that’s a missed opportunity. With its mechanics, the game could’ve had a nice ludic dialogue with Fez about whether or not there is value to a world we can’t empirically observe. Instead it sort of settles for proverbs and a light show.

As a block-puzzle-manipulating simulation Antichamber is generally well done. But because the puzzles often revolve around block manipulation rather than the environmental craziness the game seems to promise, it’s hard to shake the feeling that it never quite lives up to its premise. Then again, it’s a premise that shouldn’t have worked anyway if you stop and think about it. So I guess that’s kind of a wash.