03/13/2012|Dix|Editorials22
Home » Home » Editorials » I’m Commander Shepard, and This is My Favorite Flavor-Aid on the Citadel

I want to talk to you about a very dangerous individual whose word is, even now, spreading to your very living rooms. This individual has formed a small cadre of loyal followers and true believers on little more than force of personality. This cult is threatens to draw all of you into it if you aren’t careful.

Tappers, I want to talk to you about Commander Shepard.

By now you are probably thinking, hey, this guy is just riffing on…well, something, I guess, because Mass Effect 3 just came out, and maybe this article is just going to be all about that game and fandom and such because, like, sometimes we call that stuff a cult, right?

For one, I haven’t played Mass Effect 3 yet.  That said, this is a bit topical, because, as I will go on to explain, Commander Shepard is essentially a cult leader.  It would be totally okay with me if ME3 ends with the revelation that the Reaper threat was basically the result of Shepard’s mad ravings, resulting in the death of the crew of the Normandy, suicide-pact-like, because they believed.  In fact, I’d probably think better of the series for it.

But anyway, to the meat of the issue.

A “cult”, in the sense of, say, the Peoples’ Temple, as opposed to Buffy the Vampire Slayer fans, refers generally to a new religious movement or organization, often one which appears to use some suspect tactics to gain and keep members.  Americans, especially, have certain loaded ideas of what a cult entails, with the anti-cult movement of the 1970s having burned this into our brains – not to mention events like the Manson Family murders or the Waco siege in 1995.

A cult also tends to be characterized by being led by a charismatic authority.  This also shouldn’t be anything new to you because pop culture has convinced you of this several times over by now.  As defined by sociologist Max Weber, a charismatic authority is built on the devotion of followers to an individual’s exceptional characteristics.  This following will generally respect whatever decrees the authority passes down to them.

To be fair, charismatic authorities arise lots of places that aren’t cults, and not all cults have one.  I posit, however, that it is safe to say that Shepard is clearly a charismatic authority, especially given that many of the characters that make up the crew of the Normandy are under no particular compulsion to join Shepard.  Consistently, they join the party because of some belief in or loyalty to Shepard in particular.

Besides, to be a cult leader, Shepard would need a cult to lead.  Which reminds me…

But there’s more, and this is the part wherein I get all academic on you people.  Dr. Robert Lifton published a paper on cult formation (ironically titled “Cult Formation”) in 1981, in which he outlines the following three features of a cult:

I think I hardly need to detail too much why (1) applies here.  You can’t play Mass Effect without eventually hearing every single party member lavish Shepard with praise for one thing or another.  Eventually, when their individual plots are done, many characters stick with the party because of their admiration for Shepard.

The second point is more interesting still.  “Coersive persuasion” is a process most people would recognize better under the moniker mind control or brainwashing.  But we’re not talking about any “God loves you and so does Jacob” stuff.  This is a bit more subtle.

Popular Psychology: An Encyclopedia outlines the process.  Let’s play along with this list, shall we?

We probably shouldn’t be too surprised that most any RPG party shares some traits with a cult, in general.  It’s exclusive.  It’s primary purpose is the accumulation of power and wealth – often through gaining additional levels (albeit often toward some other goal).  The implicit inferiority of those outside the group, expressed in the designation NPC and, often, the mechanical fact that any one party character has stats infinitely superior to the generic grunt types that exist throughout the game.  Even a level of paranoia, which is not present in all examples, but certainly could be argued exists in Mass Effect.

Leaders of cults often rally their followers around some singular belief, one which the leader is privy to because of some divine revelation or special knowledge.  The fact that most of the world refuses to be enlightened to this belief serves to create a sense of “us” vs. “them”.  Shepard is no different here.  How often, in either Mass Effect, must Shepard struggle to convince those outside the Normandy crew of the threat the Reapers pose?  Even after Sovereign’s climactic attack on the Citadel, the galaxy at large, and the authorities in particular, tend to disbelieve the idea that there is a continuing threat – that Sovereign was any more than a one-off thing.  Those that join Shepard believe that his concerns are valid, that the Reapers are a genuine threat.  They believe that Shepard has special information, special insight.

Mass suicide is another feature of cults that tends to be over-emphasized in popular culture, but it’s not entirely inaccurate.  Suicide cults do occur, though not all cults have anything to do with suicide.  The most legendary such suicide was the 1978 mass suicide of the Peoples Temple movement in Jonestown, Guyana, in which 918 people died.  This is the event from which the idea of drinking poisoned Kool-Aid comes, although technically it was a different drink called Flavor-Aid.  This suicide was supposed to be a “revolutionary” act, a chance to send a message in support of the Temple’s Communist ideology.

Others have had religious motivations, like the Heaven’s Gate suicides in 1997, an act which the 39 participants believed would allow them to join the crew of a spaceship traveling in the wake of comet Hale-Bopp. 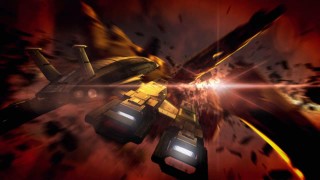 I guess cults also like spaceships...and SHEPARD HAS A SPACESHIP.

The key to this is that cult members are willing to die for their beliefs – beliefs that they may have little more than faith in.  Need I point out that Mass Effect 2 frequently refers to its final mission as “the suicide mission”?  None of the party believes they’ll be coming back, not even Shepard.  It’s a wild, reckless mission to stop a threat that, really, they still have little real evidence exists.  Sure, the Collectors are abducting people, but more than that is largely conjecture.

That whether individuals live or die is based on the outcome of their Loyalty missions is almost a little creepy when you think about it.  That is, their survival is largely determined by how much they’ve bought into Shepard’s incredible command abilities.  Those characters who have gained Loyalty status would follow Shepard to the ends of the galaxy on a whim.  The hero worship is…well, frankly, hard to believe, from a writing standpoint.

This is enough to make you think, but then you further consider that Shepard has been brought back from the dead.  It’s not out of the question for cult leaders to claim miracles such as this.  The fact that it’s true in Shepard’s case hardly matters.  The fact alone provokes its share of awe in those the commander meets.

Consider, too, Shepard’s tendency toward absolutism.  It is very difficult to play Shepard in the middle of the road between Paragon and Renegade.  Shepard’s choices generally are between the populist and the pragmatic – and they often need to be made with the barest real understanding of the situation, sometimes when the situation must be incredibly complex.  This sort of judgment is also characteristic of cult leaders.

Seriously, think about it.  BioWare’s games have, for a long time, revolved around player characters who have an implicit level of charisma that explains why the party will follow them to the ends of the earth.  But Commander Shepard is one of the most manipulative, and one of the only such protagonists who can actually win the hearts and minds of the entire party, more or less.  (As opposed to, for instance, the Jedi Exile, who could really only gain serious admiration from those characters with a similar Force alignment.)  And the true danger of the Reapers is internally questionable: we know they pose a real threat because of a metafictional sense that BioWare wouldn’t tell this story if they didn’t, they wouldn’t build up three games of stopping the Reapers from annihilating life in the galaxy only to get to the end and discover that, yep, they actually were just some mytho-historical bogeyman.

But if you were an individual in the Mass Effect universe, with the limited knowledge of, well, anyone who isn’t Commander Shepard, what would you think of this strange pseudo-celebrity?  Would you think Shepard mad, or would you, too, be drinking his Flavor-Aid?

22 Responses to I’m Commander Shepard, and This is My Favorite Flavor-Aid on the Citadel