I’ll tell you: twenty minutes is a very long time to know you’re going to die.

If you’d rather go in blind, you might prefer to play TRIHAYWBFRFYH before you read this. Just sayin’.

At first everything seems normal enough. Grass waves in the wind. The sun is shining, sort of. It’s not idyllic or anything – this is moor more than it is meadow – but it’s okay. There would be worse places, but for the fact that you know the title of the game. You clicked it to get this far.

And abruptly in the sky there’s this black disc, flat and featureless, alien but not exactly extraterrestrial, hideous and wholly unwelcome and more frightening than it has a right to be. Don’t look at it! If you look, it emits a gnyyeeaarroowwl sound, a synthetic grumble like demonic microphone feedback. Don’t look. It’s freakish, nightmarish, just hanging there so completely out of place, so unnatural. Don’t look.

Not a disc exactly. More of a sixteen-agon.

I realize it looks silly in screenshots.

In the game it’s horrifying.

In part because you can’t not look. It’s huge. Something about its wrongness draws the eye. Also: it’s getting bigger. How you know this you’re not sure, because it’s imperceptible. Even if you hold still and steel yourself and endure that sound and stare at it you won’t see it moving because it’s glacial. But you know it’s getting closer. The sixteenagon is reaching for you. You know it, just like you know that this is going to be a bad Rapture, not a take-me-jaysus-into-your-hands-I-commend-my-spirit Rapture. This is a you’re fucked Rapture.

So you start to run.

We live in a strange time. Not like an “end time” strange, I don’t know anything about that and leave such speculation to the Veggie Tales crowd who spend all day cooing about how God has a plan for for each of us, so we’re best off doing nothing (I’ll give you this one for free, Veggie Tales crowd: God doesn’t give a shit about you. God doesn’t even know you exist. God is making sure electrons keep spinning, because God is God. Take responsibility for your own life).

No, I mean we live in a strange time for video games. A couple years ago, the very concept of an “art house” game would’ve been alien. Art house game? Who would make an art house game? Art houses don’t make games. But today there’s the Unity engine, and ready distribution, and the whole world is different. Today you can download Connor Sherlock’s The Rapture is Here and You Will Be Forcibly Removed from Your Home – just go with TRIHAYWBFRFYH – and play it and be afraid and think about it and fail to understand it and still it’s awesome, and nobody will care whether you “get” it or even whether Sherlock had some kind of message in mind when he made it. 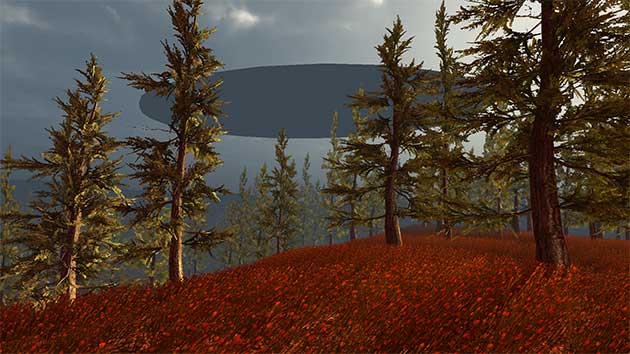 It’s really… it’s… it’s terrifying. Basically in TRIHAYWBFRFYH that sixteenagon thing is going to be here in twenty minutes and then it’s curtains for us, so enjoy your remaining time. You are, for whatever reason, out in this really quite vast open field, which somewhat limits your options activity-wise. You can run, or stand there I guess, but you’ll run. Sherlock’s game is cunningly designed. It’s hard to describe until you’ve experienced it, but the juxtaposition of a natural world and that awful looming spot taps into a really base fear. Playing TRIHAYWBFRFYH I think I understand, for the first time, how petrified cave people must have felt during an eclipse. A vast and comforting presence so innately familiar as the sky abruptly violated, the sudden appearance without warning of something so wholly contrary to the very fundamentals of how you and the world get along… even just sitting on my sofa in my pajamas, it had an effect on me.

Eventually you calm down, because as I said, twenty minutes is remarkably long time to know you’re going to die, so panic dwindles. And—lacking anything better to do—you’ll start poking around. Before long you’ll stumble on strange pillars made from upward-falling droplets of colored light. Touch them and you’re treated to assorted actors of varying but limited elocutional skill delivering dramatic readings of passages from Lovecraft. After a few minutes you realize you’re assembling pieces of short stories. The Colour out of Space is, unshockingly, one of them. Others triggered flashes of recognition, but honestly I didn’t read Lovecraft so much as endure him, so I lack any specific recall of his output.

Twenty minutes later the sixteenagon arrives, because while you weren’t looking it somehow went from merely colossal to horizon-spanning, and you’re forcibly removed from your home and dumped back at the main menu. That’s it! 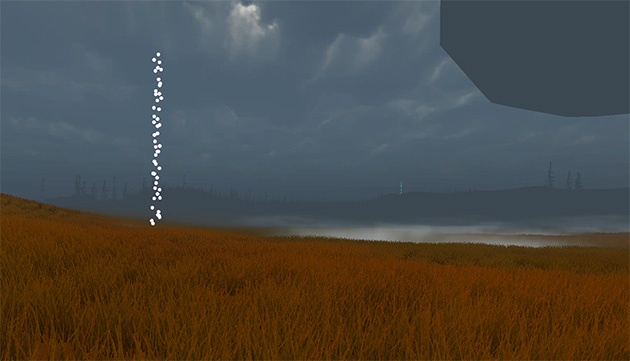 I’m not a fan of H.P. Lovecraft; his writing is terrible, and bigoted, and sexist. AND my own floridly Byzantine contortions of prose are bad enough, thank you, I don’t want to endure someone else’s. But here in this game, they work. Actually they work better than they do in the man’s own writings.

The natural gamer instinct to collect them all kicks in, but it doesn’t take long to realize just how deceptively big the game world is. The light-pillars, color-coded by story but otherwise scattered throughout the playfield at random, are sometimes inconceivably far away from each other. I’m not sure it’s possible to get them all in twenty minutes; I tried three times and was still stumbling on new ones by the end of each game. You’d have to work out some kind of most-efficient route to cover the whole territory, and even though  TRIHAYWBFRFYH has plenty of landmarks to work with, it’d be a surprisingly difficult task to really learn your way around. I wasn’t just finding new readings by play three, I was stumbling on whole new areas of the map. 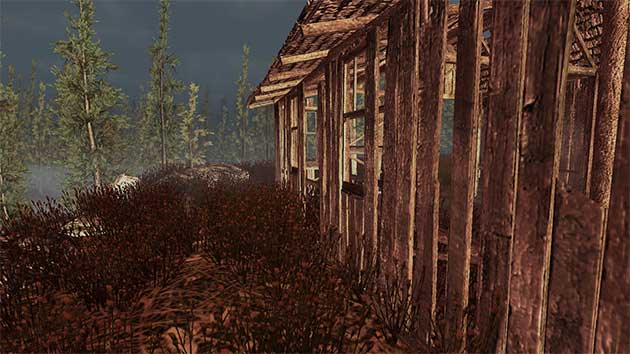 Plus, the whole time there’s that thing in the sky above you.

At first I didn’t realize that TRIHAYWBFRFYH was on a timer. I thought the disc was getting closer every time I looked at it, because of the tortured-woofer squall it emits whenever your eyes so much as brush its perimeter. I assumed it was reacting to me.

This led to a hilarious and ultimately doomed attempt to not look at it, which is practically impossible. The sixteenagon is so big that an errant mouse-flick brings it front and center unless you keep your eyes fixed on the ground the whole time, but even that won’t work for long. In the final moments it’s looming so close you can barely see anything else, yet even then its advance is too slow to see. It’s like you’re watching the end of the world approach at one-thousandth time.

The Unity engine has made some remarkable progress over the past few years, to the point where I’ve seen tech demos that easily compete with top shelf engines. TRIHAYWBFRFYH isn’t quite that polished – it’s a little angular here and there (hence the terrifying annihilative black disc appearing in-game as a modest sixteenagon); the foliage pops a little; the ground fog effects look gorgeous from a distance but fall apart up close. Still, these judgments are mild and do nothing to seriously hamper the game’s impact. Particularly impressive is its subtle use of light and shadow to instill growing dread as that thing in the sky creeps inexorably closer.

So we live in a strange time, when free Unity games are out-wowing the big boys and some of the most impactful work is being done by lone programmers who must have terrifying nightmares. You may not know exactly what to make of TRIHAYWBFRFYH—I don’t—but as investments of time go, there are worse ways to spend forty minutes of your life. I’d say twenty, but this is one end you’re likely to circle back to at least once.

It’s an intriguing concept, made all the more worthwhile by how unbelievably effective it is. Whether the world ends with a bang or a whimper, maybe the scariest thing will be how long we have to wait, knowing it’s coming.

You can play The Rapture is Here and You Will Be Forcibly Removed from Your Home right in your browser at GameJolt (Unity Web Player required), but if you want the full experience, I strongly recommend the install-free 184 megabyte download.

10 Responses to Don’t Look, the Rapture is Here