In late March of 2011, Tap-Repeatedly’s Lewis B sat down for an exclusive interview with Daniel Dociu, the formidable creative force behind Guild Wars 2 and its stunning art direction. Daniel is the creative director for the highly anticipated MMO, and one of the most talented and respected concept artists in the business. As insightful as it was fascinating, the interview makes us love his work all more…

This is Part 1 of our three-part feature. Be sure to check out Part 2 and Part 3!

Tap: To begin with, can you just tell us about your role at ArenaNet and how you first came to find yourself at the company.

Daniel: I am the studio Art Director and project Art Director for Guild Wars 2.  I started working here around seven and a half years ago.  I was hired shortly after the studio was acquired by NCsoft, the parent company, and was given the mandate to step up the art production and in general put a greater emphasis on the visuals. As you may know, the company was founded by three software engineers and for the first few years of its existence, the studio focused primarily on technology with art as an afterthought.  The acquisition prompted a new effort towards bringing up the quality of the art.

Daniel: The development team has grown a great deal, with the size of the art department having more than doubled.  We’re currently in the mid 80s as far as number of artists on the team and that has lead to my role evolving into more of an oversight role.  I still insist on art directing in a very hands-on fashion and still spend a fair amount of time getting my hands dirty creating concept art, but I also have to delegate a lot more.  The lead artists and all artists in general are encouraged to contribute more of their own vision to the game. Growth is a mixed blessing as it creates a new set of difficulties: more structure is needed; more processes have to be implemented, policed, and massaged to fit our development culture.  But it’s also more rewarding. The game we feel is going to be so much better.  Bigger, better, and more beautiful.

Tap: You’ve been quoted that in your work, you’ve been trying to convey an emotion or a high-level, sometimes abstract idea, rather than a technique-driven process. Is this as a direct result of you first working in industrial design and the rigidity that this must enforce?

Daniel: That’s a very correct assumption. Indeed, I’ve been trained in Eastern Europe back in the 60s and 70s — primarily the 70s — and as you know, the education system was extremely structured and rigid, but effective. I guess games were the first opportunity I had in my career to loosen up and to shake off all those constraints and limitations and do something that is a lot more freeform and open.  It’s a very gratifying experience, but as you said, it is probably a reaction to my over-structured youth. 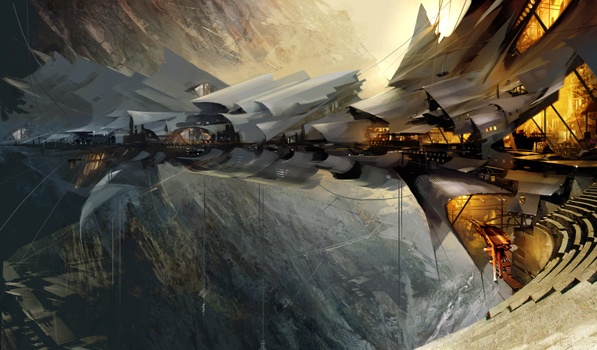 Tap: As a young art student you’ve admitted to finding it difficult to discovering a ‘style’ and only discovered it after stopping ‘looking’. Has working in the games industry allowed you that greater freedom to really find who you are as a concept artist and solidify your style?

Daniel: I’m impressed, you’ve done a lot of homework; I appreciate it. You seem to know more about me than I can remember! I wasn’t realizing how insignificant style for style’s sake is – I was putting it at the center of my struggle for developing as an artist and wasting unreasonable amounts of thought and effort towards this stylistic search. I guess it comes with age or maturity, but eventually I just stopped worrying about it and got into a mindset of digging a little deeper and focusing on things I had to share and say, things that were preoccupying and consuming me that I felt I needed to get out of my system.  Doing it in a spontaneous, honest, natural way became more important and that some how materialized in what I guess one could call my own style.  But I don’t obsess much about it and don’t worry about keeping it pure and staying strictly within the boundaries of what has defined me so far as an artist.  I just let go and focus on the message or the emotion I want to share and everything else in my opinion should come naturally.

Tap: How do you usually work? Do you prefer working traditionally or digitally and why?

Daniel: Lately I’ve been working almost exclusively digitally, simply because the closest washroom is in the other wing of the building and getting my hands dirty would be a luxury.  I’m interrupted frequently and I can’t really sit down for stretches of more than 15-20 minutes at a time.  I couldn’t join a meeting all covered in charcoal dust. Because of that, I only do it on weekends or when I can count on a block of time without interruptions, but it is really satisfying doing things the old-school way.  There are pros and cons to any medium, but the digital tools haven’t yet fully substituted the spontaneity and the tactile involvement of traditional materials.

Tap: Did the immediacy of digital work translate well into Guild Wars 2?

Daniel: Well, good art is good art.  I personally didn’t make a deliberate decision to move towards digital in my personal work or for Guild Wars 2.  It really just happened. There are so many factors that contribute to the style of a game.  Often there is the assumption that the Art Director defines the game very strictly and puts in place a style guide and writes up a set of rules that are never to be broken and are there for the production team to follow unconditionally. It might be that case in other development cultures, but it is absolutely not the way I like to run an art department.  I would loosely point in a stylistic direction and try to communicate that in high level terms as eloquently as I can. I not only allow, but encourage and expect everyone to contribute and bring their own baggage of experience towards moving the product in that general direction.

Tap: Would you like to see more games in the vein of Okami, Braid and Love where the visuals are more expressionistic than literal? Perhaps more representative of the visual quality of the concept art?

Daniel: To me, the art of a game is extremely important.  It’s what moves me, more so than the mechanics of gameplay or storyline.  I’m a visual person and it’s what I see on the screen that prompts an emotional reaction on my part.  Strong artistic vision that’s well executed on will have a bigger emotional impact on me, so would I like to see more of that? Hell yeah!

It’s what works for me, but that being said, I’m not sure to what degree my sensibility is relevant, because we are all so different.  It seems at times that a strong visual identity tends to polarize the main stream audience. People will tend to love it or hate it, the further developers deviate from the vanilla.  It prompts an attitude — which is what art should be about; but of course that response can be positive or negative. A realistic approach is easier to digest. With budgets only going up and teams getting bigger, with pressure increasing to generate more revenue faster, there is understandably a tendency on most developers part to play it safe and stay within a comfort zone.

Tap: Stormy Horizon is one of my favorite pieces.  Despite the scale of the dragon, the image has a serenity and sense of calm. Almost all your pieces allow the imagination to run wild with intrigue.  Is this difficult to capture or do you find it comes entirely naturally? 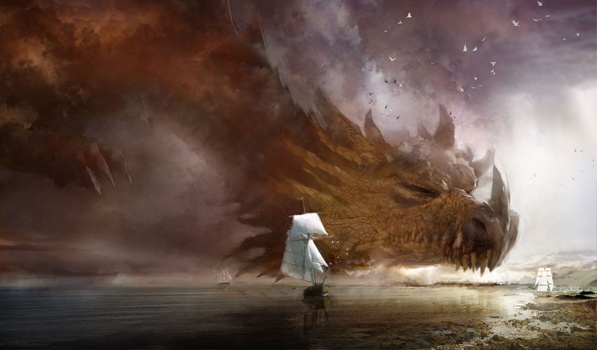 Daniel: That’s funny as it’s a piece I did only two weeks ago. Its one of the most recent.  It just happened, without much planning and is getting a lot of good reviews.  It happened rather spontaneously!

Mood is something that comes naturally to me, more so than structure or shapes, in spite of my formation as an industrial designer. I’ve managed to shake off a lot of that and I’m allowing myself to be lead by intuition and not over think these pieces.  I start a piece with a mood in mind and shapes follow.  Doing something that is devoid of mood or emotion is something that just doesn’t appeal.  Pieces that are strictly informative, isometric views or orthographic production drawings aren’t interesting to me anymore.  I’ve done my fair share of that.  I stay mostly at an inspirational level and allow the other members of the concept art team to fill in the blanks and define the details, specific shapes and structures.

This is just the beginning of our conversation with Daniel. In the coming days, be sure to look our for parts two and three, where we discuss Guild Wars 2’s user interface, the sylvari redesign, Daniel’s career goals, and the games he likes to play.