The third and final part of my coverage. Phew.

It was hard to play Dream and not be reminded of the likes of thechineseroom’s Dear Esther and Korsakovia, with its atmospheric exploration and creepy smoke creatures, but I was also reminded of the Penumbra games and Amnesia: The Dark Descent. Now I loved Penumbra: Overture and Black Plague for the way they combined traditional adventure game elements (like inventory-based puzzles) and clever physics-based puzzles with first person exploration and top-notch horror, so anything going down a similar path gets my attention immediately. Even in the noisy expo environment (with headphones on I might add), I was amazed at how unnerving I found Dream; I jumped at least three times while navigating some sort of maze to switch off a series of lights (for reasons that remained unclear). And true to its name, Dream felt very dream-like; I found myself coming across objects that seemed to have no place in their surroundings, like TVs and computers on a beach, some broken, some fully functioning. I didn’t particularly enjoy Dear Esther or Korsakovia, they aggravated me in various ways, but Dream looks like it might just hit a sweet spot between those two games and the aforementioned Frictional titles. We shall see. For more information you can check out the game’s Greenlit page here.

This was easily one of my favourite games at the expo for several reasons. Firstly, it’s a light platformer with light adventure game elements (similiar to Stacking‘s). Secondly, it’s two player co-op which makes adventure gaming that much more entertaining (Mat and I dived into this on the last day and he came away from it feeling as positive as I did). Thirdly, it’s Ron Gilbert and Double Fine so it’s as utterly charming and witty as you’d expect. And fourthly, it looks fantastic (even more so on PC, see here). There are seven unique characters in total, three of which can be chosen to venture into the cave. Each character has their own ability and secret or story to unveil so replays will provide different experiences. In the 20 minutes we played we crowbarred our way into the cave, overburdened a suspended platform, fixed a well, caught a drip that was shorting a fusebox, drank New Grog and baited out a blue fire-breathing dragon from his slumber using an Omdog. I can’t wait to get stuck into this.

Muse Games have returned this year with a fully fledged online co-op/competitive multiplayer sequel of sorts to their devilishly promising proof of concept Guns of Icarus (which I reviewed last year). In a nutshell, Guns of Icarus Online revolves around aeronautical warfare between different airships, each manned by a team of up to four players. Muse Games demoed a few maps at the expo but generally stuck to the desert deathmatch map as that was easier for newcomers to just dive into. Mat and I managed to get into a team together with me as captain piloting our ship (no easy task I can assure you) and Mat as a gunner delivering the payload to our opponents (no easy task either). Presumably the other two players were engineers holding our suspended tin can together. The two of us (as well as Ryan who was on someone else’s team) had such a great time that I asked one of the devs if it would be possible to secure a bunch of closed beta keys for a group impressions piece in the near future. However, knowing the game’s due for imminent release (Oct 28th I believe), if we don’t get in on the beta then I hope to follow this up with some impressions of my own, so stay tuned. All in all though, Guns of Icarus Online was a huge surprise and I’m eager now to get some quality time in with it.

That’s why Natural Selection II was my highlight of the show; two asymmetrical sides, online co-operative and competitive multiplayer, first person shooting combined with solid RTS elements, robust, exceptionally designed, and so much more polished than I ever expected. That trailer also features what sounds like some badass didgeridoo drone.

Built from the ground up after the popular Half-Life mod by the same name, other than itself,  Natural Selection II most closely resembles the likes of Savage and Nuclear Dawn. The aim of the game is to simply destroy the ‘hearts’ of the enemy’s team. Each team has foot troopers who move around in first person carrying out the dirty work, and a single commander who looks over the battlefield from a top-down perspective strategically placing structures (or their plans at least), issuing orders to troops to help build them and to co-ordinate attacks against the enemy. I started out playing as an alien grunt which, like some of the other creatures, is viewed through the mouth(!!) so you can see the teeth biting down and the tongue flopping about as you jump (which is very cool). Also, like the xenomorphs in Aliens: Colonial Marines and the Aliens Versus Predator games, you can climb onto walls meaning you can be a genuinely devious bastard, hiding above bulkheads and in dark corners waiting for hapless marines to come bumbling through. Something which I only noticed after several rounds of play was that as a game progresses, the aliens’ ‘secreted resin’ (but secreted from what?) slowly and steadily spreads throughout the level, so those cold, hard, sterile corridors and chambers you dash through early on have the capacity to eventually be caked in green bubbly gunk, teeming with various alien lifeforms and eggs. As an alien, this is A Good Thing, but as a marine it can be quite tense walking into these areas because each egg has the potential to spawn a player. Watch your six.

Later on after playing as a marine foot trooper, I got the chance to play as a commander which felt like an entirely different experience. Thankfully one of the devs was there to give me a hand, explaining the mode’s conventions, what I should be building, and where. One very nice touch, which I noticed when I was playing as a foot trooper, was after placing a plan for a structure, blue arrows would appear on the floor directing nearby players to it to help with construction. The same would happen if I selected players and ordered them to certain locations. As the developer said, playing as a commander was exactly like playing an RTS, the difference being that your troops are real people and won’t necessarily do as you say (eek!). Thankfully, I was playing with Mat who I could see was trying his damnedest to follow my inexperienced and perhaps ill-conceived orders. I remember placing some sentry gun plans and getting Mat to build them and hearing him squeak when he saw them unfolding. That’s kind of what the whole experience was like for me and so much more exciting than the comparatively paper-thin team deathmatch of Aliens: Colonial Marines. I’d like to have seen Natural Selection II next to it to be honest. Anyway, I have my money ready– scratch that, I’ve just pre-ordered it — but Natural Selection II is due for release any moment and I’m very excited about it. You can read more about it here, or alternatively for a more in-depth overview of what it’s really about, you can watch the fantastic developer’s session at Rezzed from a couple of months back.

Okay so I didn’t get to play this, obviously, but we did get a sneak peek of Just Add Water’s reworking of the fantastic Abe’s Oddysee (with the new suffix ‘New ‘n’ Tasty’) as part of a developer session with Lorne Lanning. Lanning spoke at length about the difficulties of holding on to the Oddworld IP while still wanting to develop the Quintology as originally planned, and how digital distribution will hopefully allow those plans to become a reality. Eventually. In the meantime however, he and JAW had this to show us:

I’ll not deny, that footage gave me goosebumps — such is my love for Oddworld. What amazed me however, was how much JAW seemed to have nailed the graphics, audio and general feel of Rupture Farms. Getting those things wrong would have been catastrophic. The expanded GameSpeak too looks to be a revelation, giving the Mudokons (and I’ve no doubt the Sligs and Glukkons too) even more personality than before.

Anyway, on that note, I’m going to round up my Eurogamer Expo 2012 coverage here. Thanks for reading and if you’ve any questions feel free to ask in the comments.

Here’s a final picture of me after a sugary sticky sauce-coated cosplaying zombie got hold of me. I wish I’d had my cricket bat handy. 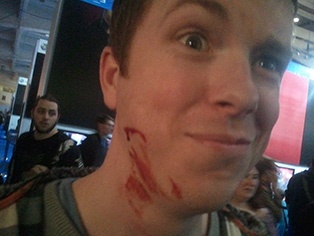 To contact the author of this hot air, email greggb@tap-repeatedly.com