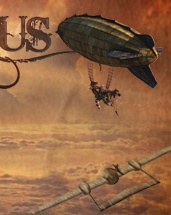 “Given its short development time, Guns of Icarus is an impressive feat. Most disappointingly however, is that it only flirts with greatness; hinting at a game that it could be and more damningly one that we’d all rather be playing.“

Let’s start with the trailer.

Other than the disaffected (and mildly sedated) voice over and the sweeping shots of your armed-to-the-teeth airship, everything in that trailer occurs in the game; the frantic repairing, the diving from level to level, the intense gun fighting — pretty neat eh? Placed somewhere between Panzer Dragoon and Skies of Arcadia, Guns of Icarus casts you as a trading privateer in a fragmented post-apocalyptic future tasked with solely arming, defending and repairing your airship as it sails through crimson skies between various locations marked on your map to trade goods. This map acts as a kind of overworld screen that allows you to plot your course towards the south east (for reasons unexplained in the game). 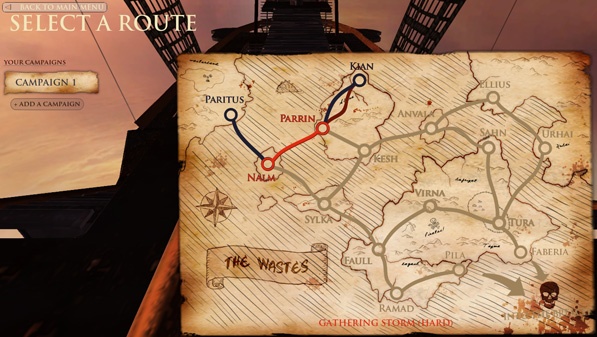 The most westerly routes are the easiest to traverse with fewer pirates to apprehend, while the easterly routes are much, much more dangerous but are, apparently, the most lucrative. Me being me, I went east first. When you’ve chosen a route a little ‘story art postcard’ is displayed that shows the travel distance to your next destination and a small, somewhat trite, snippet of our privateer’s forlorn (and probably mildly sedated) thoughts on his journey. It’s a nice touch but comes off as a little tacked-on considering that during the game there’s next to no exposition; there’s no distant landmarks relating to your location, no story events, no pirate radio chatter, no personal remarks from the protagonist — these story art postcards are all the game has to offer to fill out the fiction of its otherwise compelling world, and even then there is no hint at the player-character’s motivations for heading south and why he chooses to pursue his deadly errands. 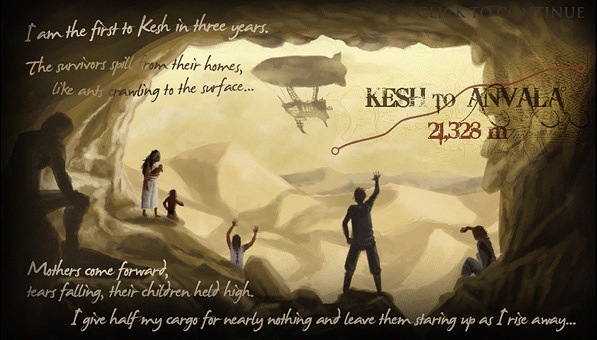 Before you begin a journey from one location to another you’re given the opportunity to allocate turrets to different parts of your ship. There are six slots in total, one on the bow, one on the stern and two on both the port and starboard. Your first basic turret is the gatling, a close range weapon — and arguably the most useful/destructive in the game — that fires a steady stream of hot lead towards your foes. As the game progresses you’ll amass a staggering arsenal of eight weapons, four of which are pathetic upgrades to already pathetic weapons. There’s the cannon, a long range pot-shot turret that’s nigh-on useless because it can only fire four rounds before having to be reloaded. There’s the rocket which fires three homing missiles that have little to no explosive area of effect (I found these more useful as fire-and-forget turrets). And finally there’s the tesla, a very accurate, extremely long range single shot lightning gun that doesn’t fire nearly quickly enough to warrant giving it the time of day. I wouldn’t take much issue with these options if it weren’t for the not-so-super upgrades being so woefully unimaginative and underwhelming. And when I say underwhelming I mean it: the super gatling, the super cannon, the super tesla and, wait for it, the multirocket. They even have little stars next to them to make them even more super. Judging by the trailer above, only the multirocket (the only turret I didn’t manage to unlock, and visible at about the 45 second mark) was given any sort of special treatment; the rest look the same, sound the same, and aside from a rate of fire/capacity/damage buff, operate exactly the same. I’ve never felt quite so disappointed by a reward system. 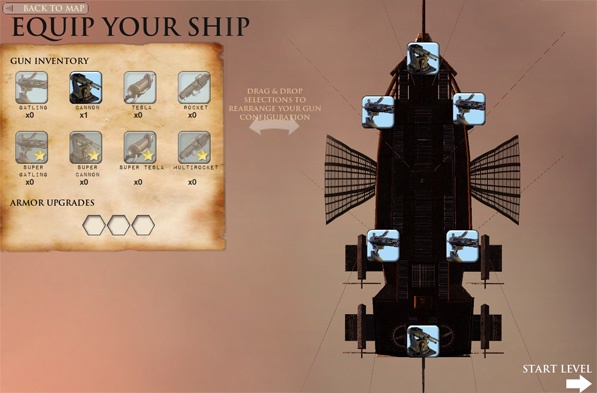 Once you’ve allocated your meagre arsenal it’s time to take flight. Your airship is divided into five damageable parts, the left and right engines, the cargo bay, the rigging, and the zeppelin. The idea is to survive the journey from one location to another in order to trade your cargo for new turrets (yay!) and armour to increase your future chances of survival. A journey’s length is shown by a counter at the bottom of the screen that counts down while ever your engines are active. If they get damaged by pirates then your airship slows to a halt leaving you quite literally high and dry. At the top of the screen is a bar revealing the integrity of your cargo. As your cargo bay becomes damaged so too does your cargo, meaning that you’ll have less to trade when you reach your destination. The rigging and zeppelin keep your airship in the sky so if they are destroyed then, well, you die and have to try again. In order to keep all these parts functioning properly you have to repair them whenever they get damaged. This is easier said than done because when you’re repairing your airship you’re not manning your turrets and therefore not felling the pirates doing the damage. And here lies a problem.

See all those white shapes surrounding the yellow shape? They're pirates.

As mentioned earlier, I plotted a journey east for presumably untold riches against silly odds — and they really are silly odds (see image above) — but the steep difficulty exposed flaws in the otherwise sound core mechanics. After a couple of hours repeating various journeys, trying different turret configurations and getting to grips with the defend/repair mechanic, I hit a brick wall as I encountered a route called ‘Acid Rain’. No matter how I approached this particular section with the turrets I had, I just could not survive. The reasons were twofold: firstly — and despite having a number of super gatlings, super cannons, a tesla and a rocket turret — my fire power simply wasn’t adequate given the number of pirates encircling my airship. Secondly, and perhaps most importantly, the defend/repair mechanic coupled with the effects of damaged engines and a damaged cargo bay cumulatively compounded the difficulty making defence all but impossible. For example, you get to a point where you have to go and patch up your engines so your airship can keep moving closer to your destination, if you don’t do this then your airship becomes a sitting duck, opening you up to even more enemy fire. As you repair your engines, the cargo bay, rigging and zeppelin come under fire as well. If you leave your cargo bay burning then you lose your cargo and by extension the means to acquire upgrades for the following level, thus increasing the difficulty even further. If you leave the rigging and zeppelin burning then you risk dying and having to start again. So you go and repair your cargo bay, then make a bee-line to the rigging and the zeppelin, and in that space of time your engines are back in a critical state again. You see where I’m going with this. It’s a vicious circle that begins the moment you have to make intensive repairs while being swarmed by pirates, and in the east that’s practically all the time. I could go back a few journeys and try to maintain more of my cargo in order to trade it for armour and ‘better’ turrets, but the moment you have to make a repair is the moment you have to abandon your newly acquired turrets, and then you’re cast up the proverbial creek without a paddle again.

The Song Remains The Same 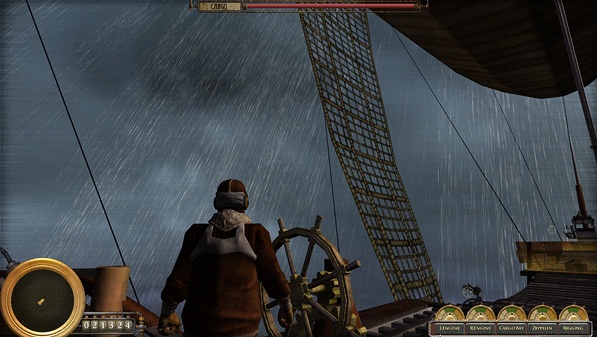 Guns of Icarus‘ greatest problem is how little it has to offer beyond the above. By taking the easiest route across the map which is… blimey, five journeys, the game can be completed in about twenty minutes with very little challenge, witnessing nearly everything the game has to offer. Even if you were to eke out the length of the game by taking a longer route or doing as I did and taking a tougher one, the game doesn’t feel progressive in any substantial way and is very repetitive; you’re always on the same airship, carrying out the same tasks, shooting at what look like the same enemies with the same turrets. Even the soundtrack as you clamber about your airship is restricted to a single piece which plays over and over again. That’s not to say it’s a bad piece; on the contrary, the music and sound effects are excellent, if a little flat due to there being no surround sound (which would be perfect for a game like this). The visuals too, though a little rough, serve the game well; flames and smoke billow out from damaged engines (and bizarrely damaged rope), gunfire streaks across the sky, rainfall showers out from above the zeppelin, volumetric clouds shroud the enemy, the sun glares brightly without a lens flare in sight, and the colour palette alters beautifully as the weather changes. There’s even a neat grain effect that gives the game an olde textured look. Aesthetically it’s a solid and evocative effort, it’s just a shame about the relatively shallow game underneath it all.

Your Time Is Gonna Come

And that’s the thing: there’s so much potential here that remains untapped. I’d like to have seen a few alternative airships to commandeer with different layouts, turret slots and armour. I’d like the turrets to have had more satisfying and worthwhile upgrade options, with noticeable visual and aural differences. I’d like to have seen a much bigger world map with unique locations home to traders, engineers, missionaries and civilian folk willing to help you at a price. There could even be individuals that require passage to certain locations, willing to pay you handsomely for the effort. I’d like to have been able to recruit a small crew to help me on board, taking orders, manning turrets and repairing damaged parts. Even personal firearms to give our privateer some form of offensive action whilst moving around the airship would have been a welcome addition. 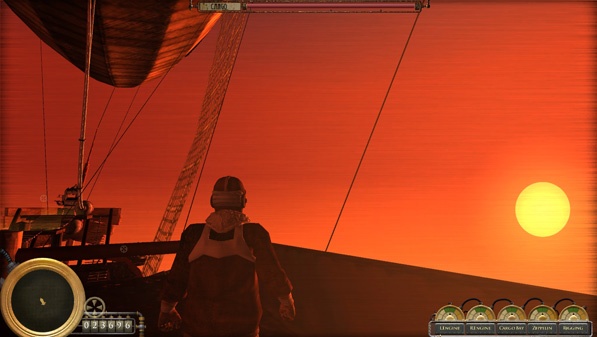 I can’t shake the feeling that Guns of Icarus would be better suited to an open dynamic structure as found in games like Mount & Blade, Space Rangers or Sid Meier’s Pirates!, with the sort of management and customisation found in the tank battles in Dragon Quest Heroes: Rocket Slime. Of course, I’m expecting way too much here for a fledgling independent effort that spent four months in development, but such is the power of the setting, the idea, and that bloody trailer.

At times, Guns of Icarus is exhilarating and even cinematic as the on-rails multitasking shooter that it is — very much because of the things shown in the trailer above — but more often than not it just misses the mark. For a few quid and an 85MB download it’s hard to quibble (a very slick demo can also be played in your browser here), but seeing what Guns of Icarus could be hurts more than playing what it isn’t. Here’s hoping the sequel, that will apparently feature many of the improvements listed above (and more! Hurrah!) takes the franchise much further beyond its maiden voyage.

Guns of Icarus is available for PC and Mac from Muse Games and through Steam.

Note: I had originally awarded this game two out of five, but after discovering it had only been in development for a mere four months I decided that Guns of Icarus deserves far more credit than I had initially given it and have adjusted the review accordingly.

6 Responses to Guns of Icarus

Xtal’s Games of 2011: Not Another Fetch Quest