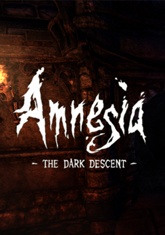 “Amnesia differs from any horror game I’ve ever played. This isn’t just horror. This is dread, the stuff of nightmares.”

I don’t like adventure games. I did, in fact, grow up playing Sierra’s old “Quest” series of games like Space Quest,  Police Quest, and Leisure Suit Larry. My first PC game was Infocom’s Hitchhiker’s Guide to the Galaxy, soon followed by Zork and Planetfall. I loved them like I “loved” my first girlfriend in second grade, but my infatuation with them diminished as I moved on to Wasteland, Civilization, and Doom.

I soon saw the adventure game genre as a dinosaur, but not one of the cool meat-eaters all five-year old boys love.  They were boring, slow-moving herbivores, and worse, they continuously belched puzzles that were either too simple, or too absurd and contrived.  I was tired of playing “Click-on-a-Pixel” and “Just-Take-Every-Item-You-Find-Because-You-Know-You’ll-Need-It-Eventually.” Please don”t bother me with exceptions. I’m sure they exist, but I simply don’t care. Steerpike’s been pushing Sam and Max on me for going on three years now, claiming it’s funny and fun and a riotous good time, but I’ll never make time to play the stupid thing.

My problem, however, is that I suffer from an addiction to horror gaming.  When I learned Frictional Games’s Amnesia: The Dark Descent mines a mythos of unspeakable horrors and forbidden knowledge, I indulged in the rare exception. After all, they put forth a reasonable effort with the Penumbra series, and they were promoting Amnesia as one of the most terrifying games ever made.

At the Mountains of Disappointment

I enjoyed FG’s Penumbra games and knew what to expect from Amnesia in terms of game mechanics. Wander in the dark. Read some notes. Flee from monsters. Combine some items. Solve puzzles to go to the next area. Read some more notes. Rinse and repeat. Penumbra pulled it off because the solid story and voice acting created a memorable horror experience, but I expected Amnesia to surpass its predecessors.

Amnesia, however, gave me immediate reason to worry; my character wakes up with no memory of past events and must rediscover himself and his surroundings. I know it shouldn’t be a surprise given the title, but the whole amnesia-as-a-plot-device method was taught in Remedial Game Design by some guy named Bob. Even so, FG’s suspenseful story once again saves the day (minor spoilers from very early game ahead). My name is Daniel. I awake in cold darkness and soon find a note, apparently written by myself, to myself. The note makes two ominous points: I voluntarily suffered amnesia to obliterate memories too painful to remember, and I must find and kill someone named Alexander.  Worse, something…evil…and ancient…hunts me. There are no explanations as to how or what I’ve forgotten or why Alexander must die, but the note’s tone carries such sad and terrible gravity that I wasn’t sure I wanted them (end minor spoilers).

I really can’t stress it enough: true horror needs a good story and good characters, otherwise they devolve into the Saw films. Simply stated, Amnesia delivers. The writers’ decision to set the entire game inside of a castle was no doubt influenced by the limitations of the graphics engine, but they make this limitation one of the game’s strengths. The claustrophobia oppressed me everywhere, and if I found respite, it was only to tease me with salvation before tossing me back into the darkness.

The story also didn’t quite end up where I thought it was heading, which I appreciate. I won’t be specific because spoilers will only diminish players’ enjoyment, but FG clearly loves the themes of cosmic horror and knowledge best left unlearned. Sure, it’s mostly revealed in various notebooks and scraps conveniently littered around the levels, but it made sense within the context of old-Daniel “talking” to post-amnesia Daniel. 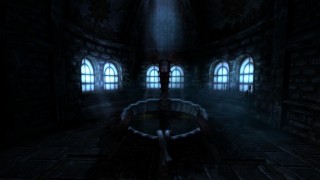 I never knew how much I took natural light for granted until now.

The game also avoids over-exposition, preferring instead to  show  just enough to keep the player’s imagination preying on its conscious mind. Most divulged details raise at least as many questions as they answer, and many of those questions remain unanswered at the end of the game. One could argue they’re leaving room for a sequel (and perhaps they are), but they are also following Lovecraft’s mythos. According to the great-grandfather of modern horror, there are things just on the fringe on the human consciousness that, if fully exposed, would either drive us to insanity or suicide, or both. Amnesia hints at stark horrors without over-exposing them, and it prevents the game from being merely a “memorable horror experience.”

Amnesia differs from any horror game I’ve ever played. This isn’t just horror. This is dread, the stuff of nightmares.

The Doom that Came to My Ego

Amnesia’s press release strongly recommends players experience it in complete darkness and with headphones. I complied with their request and found I am only a half-man. In one scene, (minor spoiler ahead) I was fleeing a nearly-invisible creature only to find a gate and a rusty wheel. Turning the wheel opened the gate. Unfortunately, FG’s interface prevented me from just clicking on the wheel to turn the damned thing–I had to click on the wheel, hold, and rotate the mouse counter-clockwise. I could hear the abomination nearing me, and in my sweaty panic I fumbled with the mouse. The creature was surely right behind me when I finally paused the game, ripped off my headphones, and took an hour-long break (end spoiler). I had to call Steerpike to tell him, “Fuck this game,” when in fact I meant, “This game just scared the soul out of me and I played Fatal Frame, System Shock 2, Shalebridge Cradle, Silent Hill, and countless others in utter darkness.” 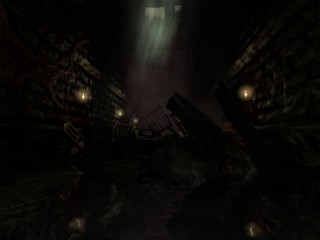 Try fleeing through this...

At least Fatal Frame gave me an enchanted camera. In Amnesia, I had no way to defend myself from anything I encountered, leaving me to flee or hide until I couldn’t hear it breathing anymore. My helplessness was a refreshing change from every other would-be horror game that allows me to eviscerate anything I encounter in a dozen different ways.

Of course, it’s not all sweaty panic and a frantic pulse. I heard the denizens of that terrible castle far more often than I saw them, and when I did, it was only a fleeting, blurry glimpse. Daniel exists in a fragile state of mind, and things like darkness, vile sounds, and wandering horrors will bleed his sanity away. As Daniel loses contact with reality, it distorts around him and creates unpleasant hallucinations, the nature of which are best left unspoken.

If I haven’t spent any time discussing actual gameplay, well, it’s pretty standard adventure game fare, admittedly with a few twists. I repaired machines, opened doors, improvised cutting tools, and solved host of other adventure game-type problems. Most of them are intuitive and fairly easy, but this left me to focus on whatever was shambling down the hall. The game’s more about the sound and the immersion than brainteasing anyway, and at least the solutions made sense. 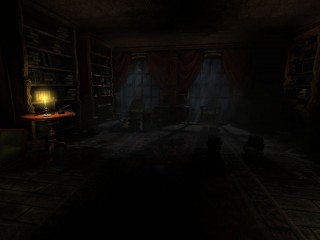 But...the other windows had light...THE OTHER WINDOWS HAD LIGHT!!!

There’s no stats to change, no upgrades to buy, no weapons to find , and the only loot consists of puzzle items, tinderboxes, and fuel for the ever-dwindling lamp. Darkness is not Daniel’s friend; more than a second or two of it and his sanity begins to wane, forcing him to choose between lighting candles with a finite supply of tinderboxes or depleting his fuel. The simple tension works, and I don’t doubt a more elaborate system was deliberately omitted by Frictional.

Frictional Games deserves accolades for making an affordable game ($20) and not deviating from their stated purpose of creating immersion and dread within the player. Furthermore, they accomplish their task with little more than amazing sound production and a solid story. Finally, Amnesia just does countless little things right, each of which made me feel more vulnerable. I would mention them, but like the choicest meat, they are best when fresh.

Now, pray excuse me, I can hear something scurrying in the walls.

21 Responses to Amnesia: The Dark Descent