Remember when I used to write words about video games? Man, good times.

On this the week after PAX West (which, was basically the last time I seriously wrote about video games one year ago, as the mood struck me), I decided to jump in on the release of Ben Esposito’s Donut County. I attended Ben’s GDC talk about the development of the game a few years ago, and I wanted to see how the final product ended up.

In Ben Esposito’s 2015 talk about Donut County, he related the story of how he reskinned it. He originally used Native American, specifically Hopi, iconography in the game, which was at the time called Kachina. Then, after reading an on-line op-ed about what a bad idea that was, he tried several years in vain to do this “correctly” before giving up on it. The bottom line here is you just can’t use Native American iconography in fictional stuff right now, unless you’re an actual Native person doing it semi-autobiographically. That symbolism is just too heated. It may be off-limits forever, or at least until there is no longer a football team called the Redskins. So Ben had to go back to the drawing board. 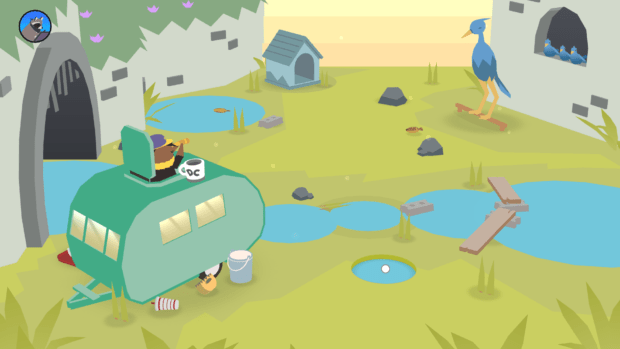 The game that emerged from the ashes of Kachina is Donut County. It’s set in a fictionalized version of L.A., populated by some humans and some funny animals. Many games work best as metaphors for their own development cycle. (Sidebar: Donut County has an 0451 joke.) That’s certainly the case here, as instead of making a game about symbolism he wasn’t really supposed to use, Ben made a game he described as being about coming to the realization that you are being a jerk. That’s great and all. I’m not sure that’s a journey I needed to go on with Ben. (I’m in more of a “trying to find my voice again after years of watching women get shouted down on the internet for any possible reason” place.)

Imagine Katamari Damacy, except the game thinks you care deeply about the lives and relationships of the people you roll up into the Katamari. I am here to tell you that I do not. Just get into the Katamari, loser. Your screams of terror are delicious to me.

In Donut County, instead of a Katamari, you have a hole. You move the hole under a small thing, the thing falls in the hole, and the hole gets slightly larger, allowing you to drop a bigger thing into the hole. Do this until you have dropped an entire board of stuff into the hole. There are a lot of little puzzle variations, but that’s the primary mechanic. Dropping things into the hole is fun and satisfying. Listening to the people I drop into the hole whine about their fate is tedious. Shut up and get into the damn hole. 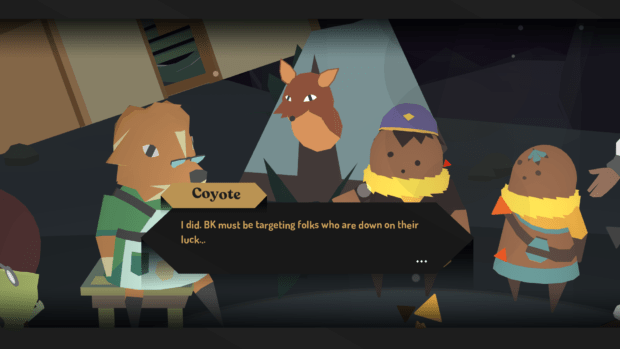 I know the game took over six years to make, so I’ll cut it some slack here. But for all developers in the future: you aren’t allowed to make a game with a fun, entertaining mechanic, then have the game’s story waggle its finger at me for using that fun mechanic. What we have here is Spec Ops: The Line, by way of Richard Scarry’s Busy Town.

Sidebar the second: at PAX I went to a panel about the future of interactive storytelling, and the writer from Spec Ops was on that panel! He said (I’m paraphrasing, but the panel is all online) that while he was proud of the work that he did on that game, it turns out it’s pretty easy to write a game that makes people feel bad about themselves. In the future, he’d like to write a game that makes people feel hopeful about themselves instead. Again, it’s great that you went on that personal journey! Now give back all the years of video games that you ruined. (I’m kidding; I’m kidding; love your work.)

Back in Donut County, the hole in the game’s fiction is driven by an app, which is piloted by BK, a raccoon. This is a bit of meta story because I’m the one playing the game, but I’m actually playing as the raccoon that’s playing the game? The game also uses the metaphor of “delivering donuts” to describe the interaction with the hole. Except when it uses the metaphor of “collecting garbage” to describe the interaction with the hole. These two things sort of come together at the end, but not really quite. 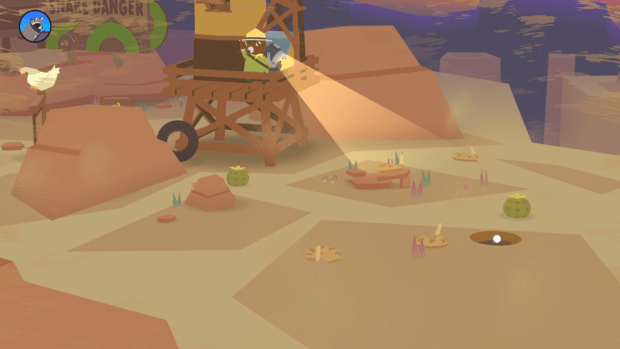 The moment to moment dialog in the game is clever, though it feels as if it is there partially to pad out a fairly short run-time. If you go back and look at the level list, there’s a good amount of different boards in the game. They just all seem to go by really quickly.

My three hour run time on the game is actually probably anomalously long. The reason for it is that I started out playing the game on a Surface Book, which is not proper dedicated gaming hardware. (I guess I make this mistake in every review now, but I travel a lot.) My rationale here was that if the game runs on iPhone, then it also would do just fine on a computer without a meaty graphics card. Unfortunately that was wrong, and my first few boards of the game were an absolute slog. It actually requires a halfway decent gaming computer to process all the little physics objects being tossed around in this title, at least if you’re playing it on PC.

One bad thing about having to play the game slowly is that the music, though it’s perfectly serviceable, gets repetitive if the game is running a bit slow. “Just fine” music is of course, just fine, but a black mark when the game invites comparisons to Katamari, with its fantastic soundtrack.

I think my favorite piece of music in Donut County is the record-scratchy triumph song at the end of every level. The song accompanies my visit to the “Trashopedia.” This is the menu where I get to review the list of everything that I dropped into the hole. The Trashopedia is also where the game’s best writing is, as you can see a raccoon’s unfiltered opinion on everyone else’s garbage, pets, and home decor. 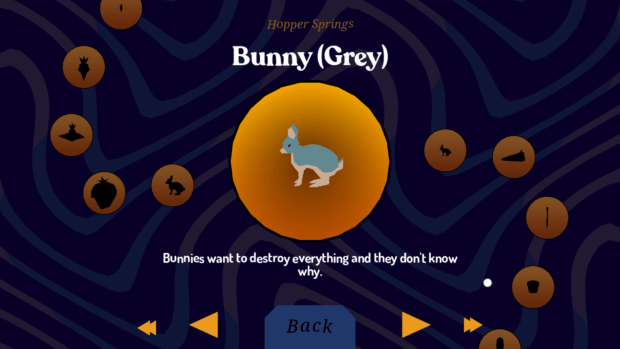 In spite of all my little complaints, I have to say the game mostly won me over in its third act. In the finale, BK the raccoon works toward redeeming himself from all that stuff he dropped into the hole, by… dropping different stuff into the hole. Hey, that’s the game mechanic. You use what you’ve got. But at least now I’m a good boy for dropping this particular stuff into the hole.

This is where I’m really tempted to say that the game is ultimately kind of disposable. Because trash, get it? But another word I’d use a lot is “charming.” There’s lots of cute little touches and it’s fun for the time it lasts. Play it if you like trash and if you’re okay with two-thirds of a game calling you trash, in a slightly self-deprecating way. And be sure to have a garbage day! 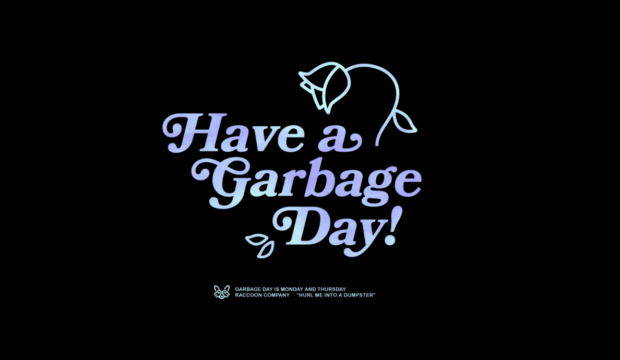