Dear Esther first appeared in 2008 as a Half-Life 2 mod. It’s an experimental what-is-it from Dan Pinchbeck, a professor at the University of Portsmouth and founder of TheChineseRoom studio. Pinchbeck, who already is tops in my book for loving STALKER nearly as much as I do, likes to experiment with setting and environment to see how first-person games can create different emotions and affect players in different ways. Shortly after the first Dear Esther, he released the crushingly terrifying Korsakovia, and then sort of fell silent for a while. With this latest, though, TheChineseRoom has sort of hit the big time.

This standalone Dear Esther, still powered by Valve’s Source Engine, was remade by artist Robert Briscoe in collaboration with Pinchbeck. While much of the experience has been heavily redesigned, the effort was to retain as much of the original’s intent as possible. 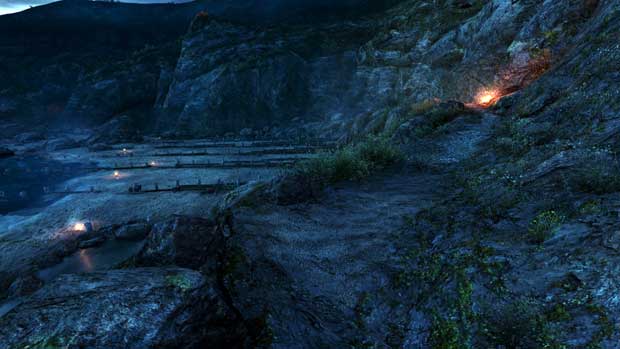 At $9.99 for 2-3 hours you’re unlikely to play twice, I can’t entirely recommend Dear Esther, but I can and will tell you that it’s something you should play, and something you should feel ashamed if you don’t. It’s not a game in the traditional sense, preferring instead to experiment with what the definition of a game should be. Dear Esther is unique, and sad, and while there probably won’t be many like it in the world, there also probably don’t need to be. Whether it’s worth your money is something only you can answer… and you’ll probably only be able to say for sure after you’ve paid, and played, to whatever degree you “play” Dear Esther. In the end all I can say is that it’s something important, even something astounding.

Games are easier. I’m reminded of a time a few months ago when Cities XL 2011 was on sale for $10 on Steam. I grabbed it, and shortly thereafter Armand sent me a text, wanting to know if he should take the plunge. I’d only been playing for 15 minutes or so, so I said I’d get back to him. Maybe an hour later I responded with something along the lines of “if you happen to have $10 in the couch cushions, or maybe a $10 just sitting there on the table, sure, it’s worth it. But if you’d have to work to earn that $10 – if it’s not already available to you and unspoken-for, my advice is to wait.” 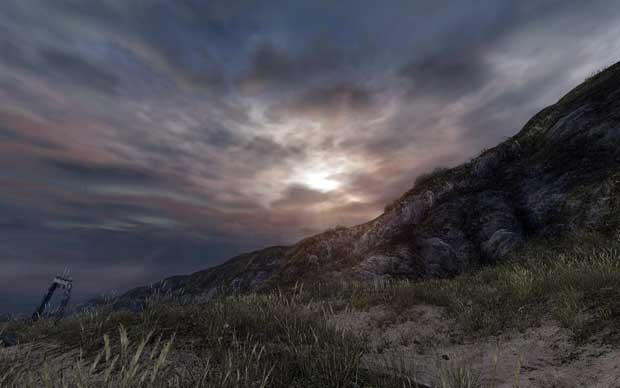 Dear Esther, not being exactly a game, is much harder. It’s like recommending or not recommending, you know, James Joyce. Certainly James Joyce is brilliant literature, but he’s also rather difficult to read. I don’t want to foist something on someone. Practically speaking in a the-majority-is-always-sane tone, I can say that this remake has already moved about 50,000 units since its release (a staggering number for a non-game indie at this price point), and has won or is up for countless industry awards. So I don’t want to foist it on you but if you skip it because it sounds weird or boring then you suck.

So You Cried to Fill the Vacuum

Dear Esther is the story of a man who has lost his wife to a drunk driver. For reasons that may or may not become clear as you play, he’s gone to a semi-deserted, half-real island in the Hebrides to wander, and think of her. I say “may or may not” because Dear Esther metes out story chunks in pieces, in the form of a broken monologue of letters to the deceased. Some blocks are triggered by where you are; others at random. Theoretically speaking no player will hear exactly the same story in exactly the same order at exactly the same locations, which means that much of what you hear requires that you make your own determination about Esther’s fate, about the state of their marriage prior to her death, and about why the man is there.

My own playthrough was this: it became clear early on that the man had come to the island to die, though he never revealed why he chose the location, or whether it had any significance to him or to Esther before her death. Nor did he ever reveal how or why he knew so much about the island’s history. And there were moments when I got the distinct impression that Esther was not the only one to die in that crash; that the narrator himself (beautifully played by Nigel Carrington) had also been in the car. Other times he gave me reason to believe that he’d been wandering the island for some time before I’d joined him, and been seriously injured while there. More than once he mentioned a “Paul,” which some gamers have associated with the Paul of Road-to-Damascus fame, but who in my game seemed more like either the drunk who killed Esther, or perhaps a man she was having an affair with, or both. 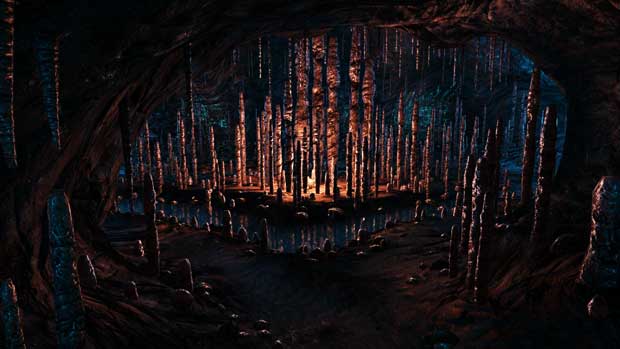 You must reach your own conclusions. And frankly, it doesn’t matter what those conclusions are. Dear Esther is a heap of broken moments that you assemble like children’s blocks as you roam the bleak and lonely shores of an island that is at least part grief-dream. I can say that whatever your experience, Dear Esther does a profound job of making you feel a little like someone who has lost something precious, and is perhaps wandering this strange landscape to find the inner strength he needs to call it a day himself, because life has never been important and we only cling to it because it’s all we’ve got.

I Will Carry the Torch for You

It’s a beautiful game. Even the aging Source’s limitations can’t contain the visual mastery that Robert Briscoe applies to the island, with its lonely windswept vistas, its bio-luminescent caves with their strawlike stalactites and glittering paintings. Jessica Curry’s soundtrack is equally evocative, beautiful and sad in a way only music can be sad. (the, ah, the soundtrack in the video is not Curry’s work; it’s stock. It just made me think of Dear Esther, and for some reason I wasn’t able to satisfactorily capture a good clean thread of her excellent soundtrack).

And all this is so important because Dear Esther is about the senses; what you see, what you hear. Understand, this is a game where you walk around; that’s it. There is no “jump” button. There is no “use” button. There is nothing to shoot at and nothing to shoot it with if there were; even your flashlight isn’t under your control, it just clicks on when it’s dark. There are no puzzles to solve or obstacles to overcome. In a general sort of way you’re headed somewhere, and gently led in that direction by the island’s scenery and geography. It’ll take you maybe a couple hours to get there, though if you’re determined you could easily do it in 30 minutes. You walk and you listen. While there is much to explore on the island, and while at moments you’ll get tantalizing glimpses in the far-off distance of things that might be people, if you come in to Dear Esther expecting it to be other than it is, you’re sure to be disappointed.

Which would be too bad for you, because while Dear Esther is nothing more than what it is – a rumination on loss and a very, very worthwhile experiment in gameplay design – the world is a better place for having it. It has been interesting to read the differing opinions at all my various favorite outlets and publications. While no one has said it’s “bad” or “unpleasant” (it’s not, even if it’s not your cup of tea, it’s not bad, and not unpleasant), some have tentatively skirted the edge of saying they didn’t like it. Others have heaped praise upon it.

In the end what bothers me about Dear Esther is not whether I considered it worthwhile – I do, money well spent, no regrets – it’s whether I can or should rate or recommend it. Clearly, it’s on Steam, it’ll go down in price soon, probably to pennies. 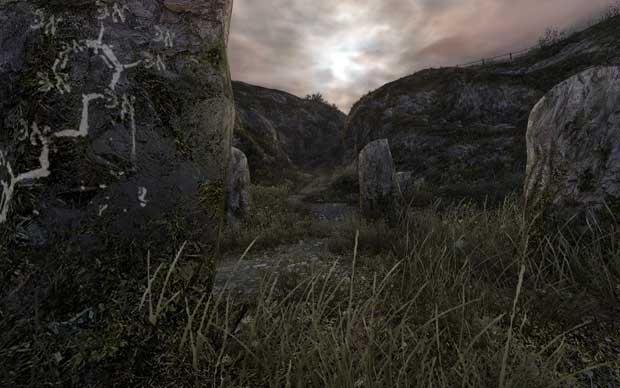 Did you enjoy The Path? If you did Dear Esther is up your alley. Now in fairness I did not enjoy The Path. I sort of… experienced it. I appreciated it without granting it more than it deserves; like everything from Tale of Tales, I found The Path overly pretentious and ultimately unnecessary, but not difficult to endure. I don’t get that vibe from Dear Esther, which I did enjoy, to whatever degree it’s possible to enjoy such a tragic tale. Pinchbeck is a student of first-person shooters, and Briscoe was once an artist at DICE; the influence of STALKER is monumental, and The Void, and Cryostasis, and many FPS titles from Eastern Europe.  But even so, those are more traditional games, so I won’t say if you liked one or all of them you’ll like Dear Esther.

I will say this… if you like sad things and beautiful things, and sad beautiful things, and if you don’t mind investing in something that was never designed to entertain but is nonetheless valuable as an experience, then you should probably put Dear Esther on your list. Playing it isn’t an effort, it’s fluid and simple and fun in its own way. It’s just not something you, or anyone, will necessarily enjoy. But don’t think for a second that makes it less worthy.