I wrote nothing on my notepad for the first five hours of playing Guild Wars 2. I always write something when taking part in any Beta event, which makes writing about those first five hours somewhat of a challenge. But then again, this was no ordinary Beta event. All my original intentions went out the window the moment I logged in.

True to some whispers, the Asura and Sylvari weren’t playable, leaving the Human, Charr and Norn zones up to level 30 (though I did reach level 32 whilst down in the Ascalon Catacombs, having auto levelled to 30 to experience the dungeon) with Competitive PvP and World vs. World also available.

Joining a special Ventrilo server for members of the press, it was a strange sight seeing it packed to the rafters with ArenaNet developers, designers and community members all patiently waiting for players to join and get started. For ArenaNet to open up their game to the worlds press in this way (and with flawless organisation) shows an unrivalled confidence in their product and a willingness to show the outside world just what the game really has to offer. Joining a channel with Jon Peters, who was seemingly running some press through the human starting zone, I realised whilst wrestling with my microphone that I could actually join the server two hours before they officially opened.

Having played the human starter zone as a ranger at Eurogamer last September, I decided I’d make a female charr mesmer. As the last class to be revealed and as one my main characters in Guild Wars, I could hardly resist. After navigating through the character creator (which has a welcome amount of options) the animated cinematic took me by complete surprise; I’d completely forgotten about them. They are simply staggering. In the comfort of your own home, on your own PC and without the background distractions of an entire expo in your ears (or another person over your shoulder) I could finally appreciate them in all their glory.

Arriving in the village of Smokestead with sword in hand, I headed out to fight back the Ghosts of Ascalon; the game gently funnelling me towards Duke Barradin, the boss event. This gentle introduction was a great way of quickly learning starting skills, regardless of class and ensures players don’t stray too far from the action.

What instantly surprised me about the mesmer was how much I enjoyed using a sword. As a lover of ranged professions (I’ve never once been a fan of melee combat in any MMOG) it goes to show the massive strides ArenaNet have made in the genre, to make combat fluid, punchy and responsive. Combat felt incredibly slick and fast paced as I leapt in and out of combat, summoning illusion after illusion. It never occurred to me that as a “caster” I was in melee range; a genre no-no.

Having quickly unlocked my sword skills after battling back the ghosts (the Duke Barradin boss was fantastic) I met Jon Peters in the Plains of Ashford. Appropriately named Jon Peters Thief (which unquestionably wins the award for most original in game name) we headed out into the world. There were two things that struck me instantly; the size of the game world and the beauty of it. Having already configured my video settings at the login screen to the highest possible (FXAA, high detailed character textures, depth of field) it surprised me, after some video card tweaking on my part, just how flawlessly the game ran. Admittedly my PC is brand new (see my specifications below) but achieving a consistent 60fps was even more surprising, especially when Jon said they were still working on optimising.

With Jon allowing me to take the lead, we headed out to the nearest event that saw us fight back the flame legion and clear the area of debris. It’s a simple premise that sees you collecting tools and placing them back on empty wracks or removing unexploded devices, but it is how it is portrayed and delivered that makes it so much fun. If you were to receive a quest that physically said “Collect 10 tools” you’d likely groan. But given the freedom to pick up the tools (with no necessity to) whilst also battling back incoming enemies in defence of the encampment, adds to the feeling of emergency and that you have physically contributed to the wider game world, by directly aiding in the war effort.

It’s this feeling of being part of the world that runs throughout Guild Wars 2 that is so desperately missing from all other MMOGs. Areas are no longer just content to exhaust and dismiss, but are part of a fully realised world that encourages exploration and interaction. Baby charr stopping you in your tracks, to let you know there’s an egg hunt near by, are wonderful moments that separates Guild Wars 2 from other sterile game worlds we have grown accustomed to.

After completing the first event, we headed to a nearby pool that was near to a flame legion encampment. Though I was low level in comparison to my fellow adventurers (with the pool cleaned and secured) we decided to tackle the flame legion head on. Despite the level difference and our party composition being highly suspect (two mesmer’s and a thief) I never for a second doubted our ability to complete content. It wasn’t necessarily easy and required a great deal of team work between the three of us, with Jon having to provide a great deal of support (shadow refuge was a life saver) but I wouldn’t have wanted it any other way. The ability to rally and resurrect one another still remains one of my favourite aspects of Guild Wars 2, whilst not having to worry about what class you are or aren’t missing is so refreshing. We just got on with it, which is so rare in this genre.

We played like this for hours, moving from one zone to the next in no particular order and with no particular focus. It suddenly dawned on me that we’d encountered so much content (too much to possibly cover here) that rival MMOGs can only dream of matching it; so much so it was at times overwhelming. After five hours, I’d completed less than 1% of the charr content, had explored only 1 underwater area, had missed dozens upon dozens dynamic events and hadn’t even touched my personal story, looked at the guild system, traits, explored structured PvP or World vs. World, visited any of the other races lands or completed a single dungeon. It’s staggering to think all this will be present come launch day and not two years down the road. 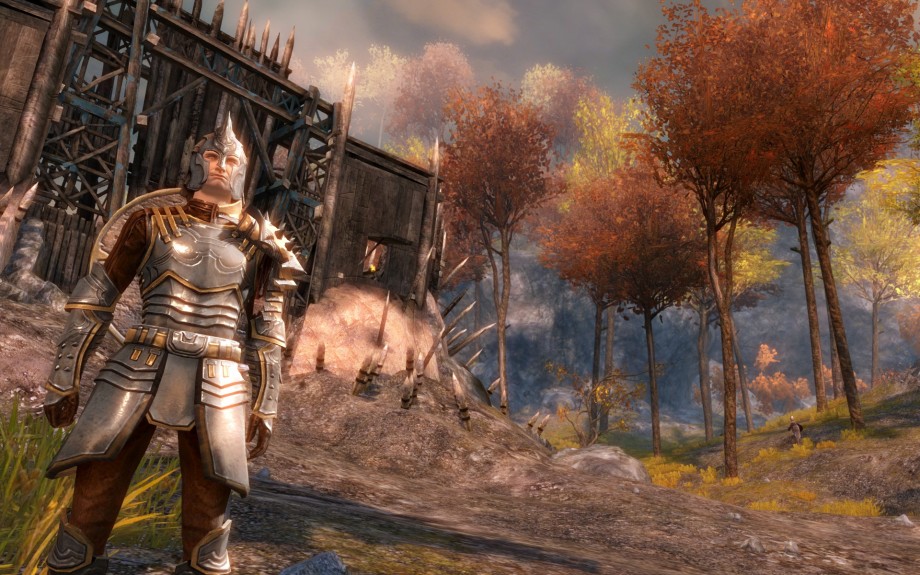 Having obtained all but the greatsword (useable at level 10) I settled for using a sword and torch over a sceptre/focus or staff; something that genuinely shocked me. It’s a skill set that allows for a flood of illusions with a great blend of cripples and defensive/offensive skills; The Prestige being one my favourite skills in the entire game. It’s just so much fun rolling backwards and casting Illusionary Leap, leaping into combat with Leap to cripple and leave a second illusion, before casting The Prestige to vanish completely, only to reappear behind the target (setting them on fire) whilst your opponent busily attacks your doppelgangers.

Another favourite element of Guild Wars 2 is certainly the skill challenges. Dotted around each map, highlighted by two blue chevrons, are various NPC’s or NPC events that should you accept, trigger a challenge to earn you a skill point. Unlike conventional MMOGs where you purchase new skills from a trainer, skill points are acquired as you complete these challenges (and as you level) which you can then accumulate and spend on any skills at any time; elite skills being the most expensive. As you level up, you gradually begin to unlock your remaining 4 skill slots.

One particular skill challenge sees you fight a charr engineer who throws bombs and mines at you or another sees you venture into a crypt to fend off ghosts. Of the skill challenges I took part in, all were difficult and vastly different; they all felt like grand events. The days of trudging back into town to acquire a skill you don’t have the money to buy are long gone.