Across the entire weekend, I played four classes; necromancer, mesmer, ranger and engineer and found the time to record structured PvP matches for all of them (which I’m rapidly editing, I promise!).

What came as the biggest surprise of playing all the classes in both PvE and structured PvP is that I enjoyed the necromancer the most. If class polls are anything to go by, the necromancer is definitely the black sheep of the family and yet it’s one of the best classes I have ever played. Using an axe and warhorn and dual dagger setup (regularly swapping between the two) a necromancers survivability and adaptability is incredible. Coupled with Death Shroud (which adds a wealth of tactical uses and what is effectively an extra life) I’m finding it difficult not to pick the necromancer as my main when the game launches.

Where the Engineer is concerned, this too appears a relatively unpopular class, which is absolutely baffling. I predominantly used a Pistol and Shield in PvP as it provided a middle ground between offensive and defensive skills. When timed correctly, Absorb and Deploy Ballistic Barrier work wonderfully in disrupting and damaging your opponent whilst keeping you unharmed, even if the cooldowns are quite lengthy. The sheer abundance and variety in skills, coupled with random effects and new F-key functionality makes for a really challenging class. Elixir S in particular is a brilliant skill and saved my life countless times. 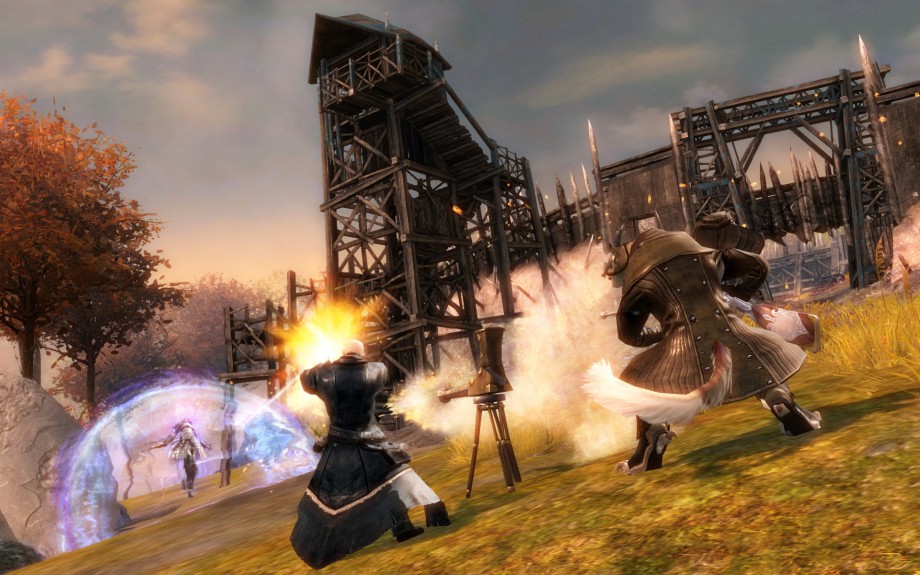 Two versus one is hardly fair...

As far as the mesmer is concerned, ArenaNet have a challenge on their hands in creating a class that has one foot in Guild Wars and one foot in Guild Wars 2. Having played a mesmer extensively in Guild Wars, I can honestly say I absolutely adore the new variant. Though it is drastically different (so much so it is almost guaranteed to be loved and loathed) it still retains the essence of what the original was. Illusions on videos may appear relatively simple or predictable, but in the heat of battle they genuinely are confusing, disorientate you and distract enough for you to hide, re-attack or make a quick get away. I lost count at the number of times I attacked the wrong illusions and laughed countless times at how often my opponents did the same. Out of the four classes I played, I would certainly consider it the most complex to play well but that boils down to effectively managing your skills (as they all tend to have long cooldowns) but also making best use of your illusions and F-key functionality. If I had one criticism of the class it is that the greatsword skill-set is just too useful. I saw no one besides myself use a sword and offhand weapon which is a real shame; sword and torch is amazing!

Finally the ranger, an archetype I have played since Ultima Online and one which I adored in Guild Wars and most MMOGs before it. There were some noticeable changes, with the most prominent being the pet management and the ability to swap pets in and out of combat, which is a wonderful addition. It adds a tactical element to the class and allows an additional layer of customisation, making choices based on aesthetics of the pet (inevitable) and its practicality. I chose to use an Alpine Wolf and Fern Mastiff for the ability to slow my opponents and heal me when needed. I also chose, at times, to use a white raven for its ability to blind. These choices (which also stretched to me using a Polar Bear frequently) really are excellent. In open maps such as the Forest of Niflhel pets really do excel. I fought one particular ranger in the Forest of Niflhel who was annihilating me whilst I was played as an engineer. I just couldn’t get anywhere near him because of his Drake pet and longbow (as you’ll soon see on my videos!).

Finally, where both maps are concerned (Battle of Khylo and Forest of Niflhel) I think I’m actually leaning towards preferring the latter. Not only is Niflhel stunning to look at, but its wide open spaces and intricate routing system make for really competitive and frantic play. The incorporation of some NPC bosses that aid in acquiring score is also a really neat touch that allows those who want to skirt around the outside of the fighting to have an objective and purpose in mind. All this isn’t to say Battle of Khylo is a worse map, far from it, they both just play so vastly different and I think that is nothing but a testament to ArenaNet’s map design.

It is rare to encounter a game that so readily defies convention, but it is even rarer to find one which succeeds in doing so. ArenaNet have crafted a game of such splendour, originality and beauty that there are no words to describe how much I enjoyed playing it. Guild Wars 2 is such a vastly superior game to its predecessor that one could play the original and never know they were related. This may ostracise some of the original fan base, but for all the changes ArenaNet have made over Guild Wars (all for the better) it is a necessary trade off for not only attracting new players to the genre, but lifting the genre above the stagnant pool it currently resides in. With an unrivalled abundance of launch content, innovative and addictive combat, incredible PvE and what is unquestionably some of the finest PvP I’ve ever played, ArenaNet have created something quite remarkable and also something truly special.

Tap-Repeatedly would like to thank ArenaNet  for inviting us to take part in the Beta weekend and to all those involved for making it so enjoyable.