Towards the end of our foray into PvE, having reached level 10 and now wielding a greatsword (a weapon too good for its own good!) we decided to head into a stunning nearby lake for some exploration. I still find it a little odd how developers have in the past failed to really tap into underwater exploration and combat. World of Warcraft for all its faults made some great strides in this area with the release of Cataclysm, but was still crippled by its design choices due to the constricted framework of the game and the player knowledge that besides questing, there really was no point in exploration. 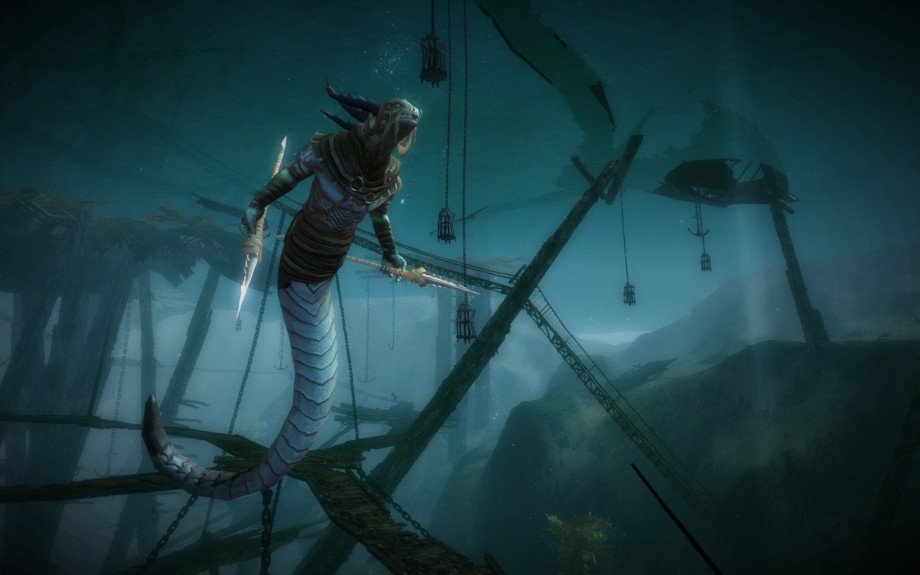 Not the little mermaid

ArenaNet have genuinely broken the mould in this field having crafted something entirely unique that plays and feels so radically different. The ability to fight on all axis whilst down in the deeps, at an equal pace as on the surface, is something you have to experience to fully appreciate. Diving deeper and deeper down, the feeling of being genuinely submerged is all the more prevalent. Colours blur and sounds bubble so convincingly. The use of unique underwater weapons, with skills that are transformed into water variants, also makes the whole process even more appealing. Ineptitude was a particular favourite as it just looks and sounds fantastic.

The potential here for ArenaNet to develop new and exciting content couldn’t be more obvious and I’d love to see a structured PvP map based entirely around being underwater or with objectives both above and below the surface. I’m just sorry I didn’t have the opportunity to spend more time in the blue.

After drying ourselves off and having reached level 11, we decided it was time for some World vs. World. Teleporting to The Mists and after Jon kindly gave me a brief overview of its function and nearby vendors we headed to the nearest portal and arrived in the Greenworld Borderlands. There is absolutely nothing that can prepare you for the scale and splendour of what you will see. Of the few WvW videos I have seen since the press beta came to a close, not one of them does it justice. It’s just enormous and like nothing I had seen before. Keeps aren’t just minor structures to assault; they are enormous hulking towers of intimidation. ArenaNet have taken everything we all loved about Dark Age of Camelot’s Realm vs. Realm combat and a sprinkling from Warhammer Online (a very light sprinkling I might add) and expanded upon it to such a degree that its actually difficult to take in the sheer size of the maps and the intricacy of them.

As we headed out to meet the rest of the ArenaNet team who were busying themselves for an assault on a keep, I was dawdling behind like a child, distracted continually by my surroundings. Reaching a nearby outpost, it soon became apparent that the NPC guards are no pushovers and really do hurt. We had to quickly call for backup to take them down as our miniature party was swarmed and killed. Having eventually cleared the mob we were resurrected and joined the others who had begun to attack the nearby keep. I should point out at this stage that during the evening my frame rate only ever dropped below 30fps once as a result of a bugged Elementalist spell effect on a keep door; the developers quickly identifying the fault and asking those in the group to refrain from using it. For the rest of my time in WvW, even with dozens upon dozens of people and spells on screen, my framerates ranged from 30 to 60. 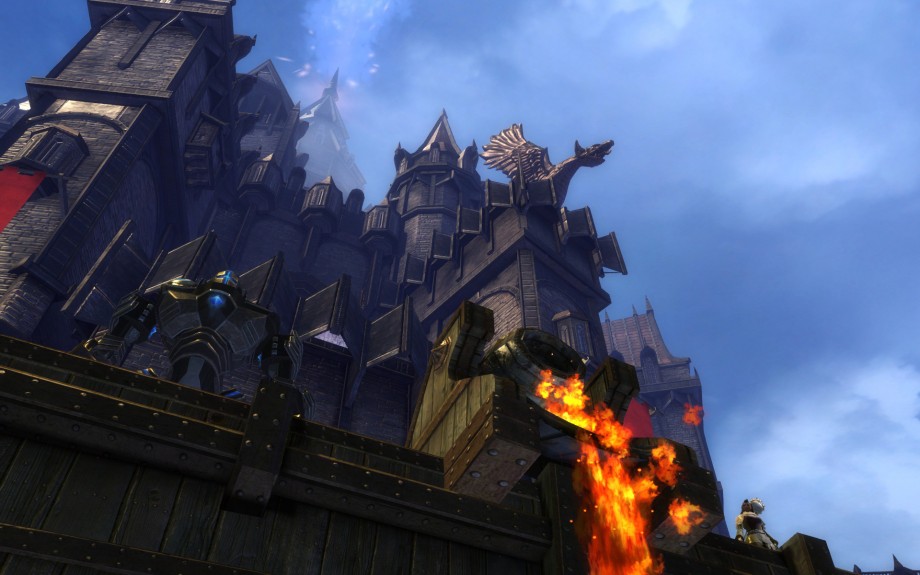 One of Guild Wars 2's keeps

As the first keep fell (and after several deaths on my part!) we made our way to the second with ArenaNet staff quickly pulling together supply to build a trebuchet. Eager for me to use it and once it was built, I jumped on the controls. When ArenaNet tell you trebuchets fire far, they aren’t lying. I can’t even begin to provide you with a comparison on its maximum range. It’s far. Really, really far. With a little bit of practice and with some pointers from Jon, I finally began to hit the keep walls and door (whilst also firing some anti-infantry cows by accident) causing absolutely massive damage as the rest of the team rallied round to build catapults. What I loved the most was the team work that was necessary. Due to trebuchet operator being so far away from the keep it is absolutely critical that you have spotters to tell you how near you are to your target, whilst effective coordination of supply is a must if you are to quickly build siege units. It also became apparent how important effectively coordinating your defences will be. Small groups of players whose sole intention is to disrupt siege equipment with hit and run tactics is going to be a top priority for those trying to defend their keep.

As we made our way to the third keep and as I needed to be up in 4 hours, I decided to call it a night but not before one last match of structured PvP turned into twenty…

A Weekend With: Bloodline Champions